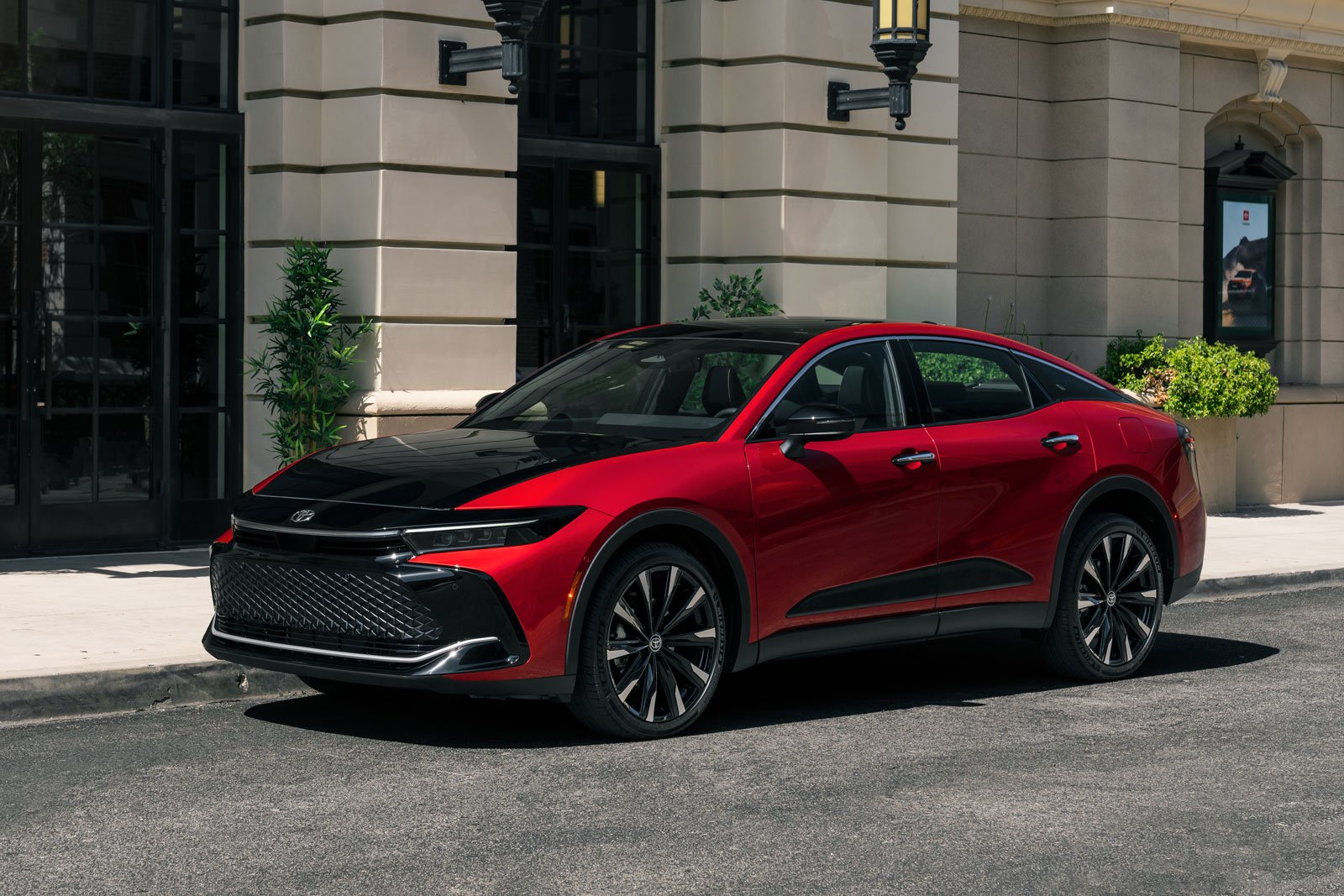 An all-new sedan is about to hit the U.S. and Canadian markets, at a time when consumers are no longer buying sedans. Nonetheless, the 2023 Toyota Crown seeks to attract buyers with a crafty liftback design, an elevated ride height and the usual Toyota hybrid powertrains.

The Crown nameplate appeared on Toyota’s first passenger car in Japan in 1955, which was called the Toyopet Crown. The little sedan was imported in the U.S. with little success, while the bigger second-generation model was also introduced in Canada. The Crown disappeared from both countries in 1972, two model years into its fourth generation. That was 51 years ago. 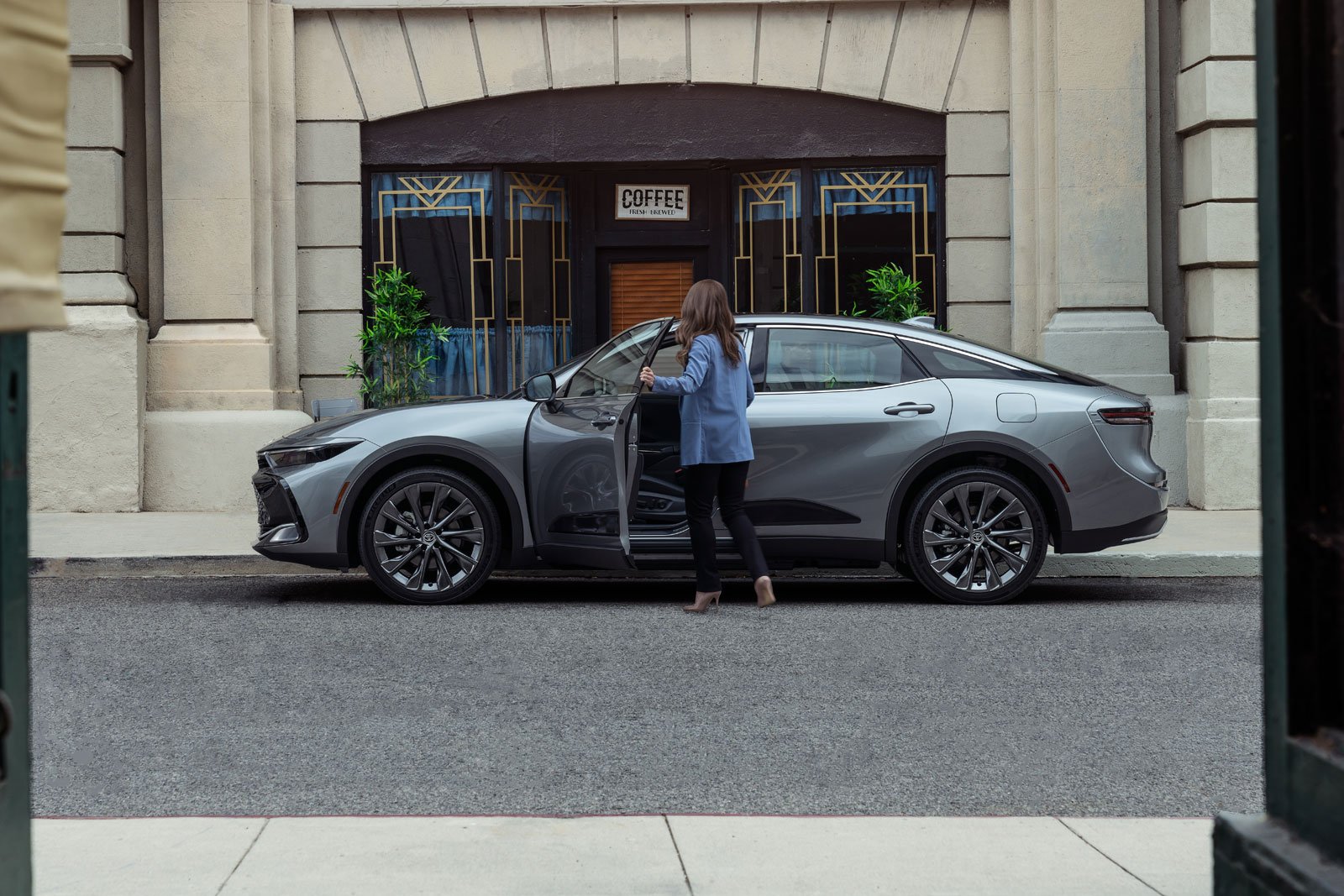 The 2023 Toyota Crown ushers in the sixteenth generation, and although previous iterations were large luxury sedans, some even sharing powertrains found some Lexus products such as the LS and GS, this new Crown is a high-riding midsize sedan. It rides on a 112.2-inch or 2,850-millimetre wheelbase and has an overall length of 194 inches or 4,930 mm, squeezing in between the current Toyota Camry and the outgoing Toyota Avalon. It’s also 72.4 inches or 1,840 mm wide, while its roofline is 60.6 inches or 1,540 mm tall.

The Crown will be offered in XLE, Limited and Platinum trim levels in both countries. The two first variants are equipped with a hybrid system consisting of a 2.5L four-cylinder engine and two electric motors, and although output hasn’t yet been announced, a similar powertrain found in the 2023 Lexus RX produces 246 horsepower and 233 pound-feet of torque. The XLE and Limited also feature an electronic all-wheel drivetrain called E-Four AWD, thanks to a third electric motor connected to the rear wheels, and the available torque split can vary between 100:0 and 20:80 front/rear as needed. The automaker claims a combined city/highway fuel economy figure of 38 mpg or 6.2 L/100 km. 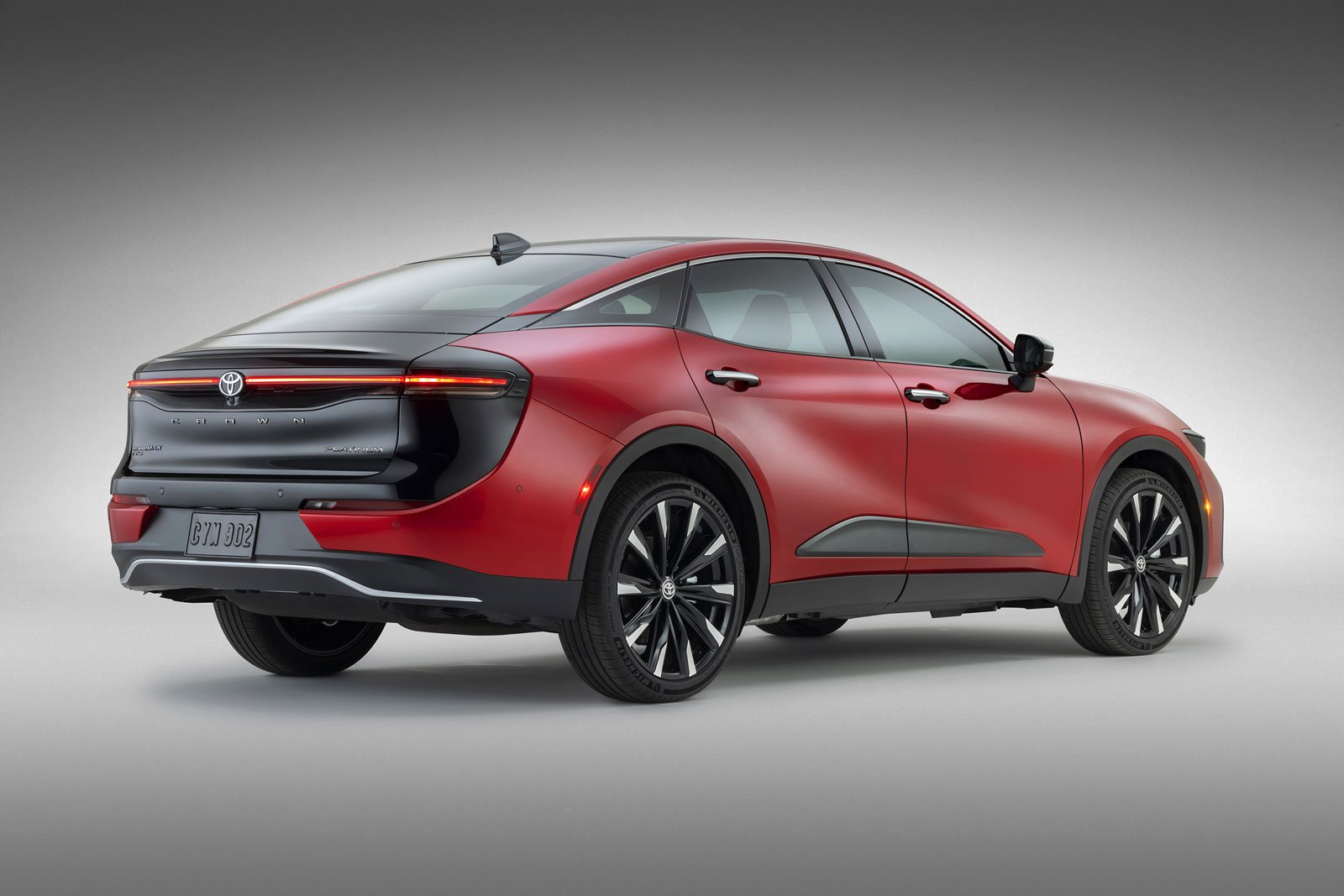 Meanwhile, the 2023 Toyota Crown Platinum benefits from the performance-oriented HYBRID MAX powertrain with a turbocharged 2.4L four, two electric motors and a six-speed automatic transmission. Output is estimated at 340 horsepower, while a similar setup in the new Lexus RX 500h F SPORT Performance is rated at 367 hp and 406 pound-feet of torque—just to give us an idea. The Platinum variant with its HYBRID MAX system is said to deliver a combined average of 28 mpg or 8.4 L/100 km. 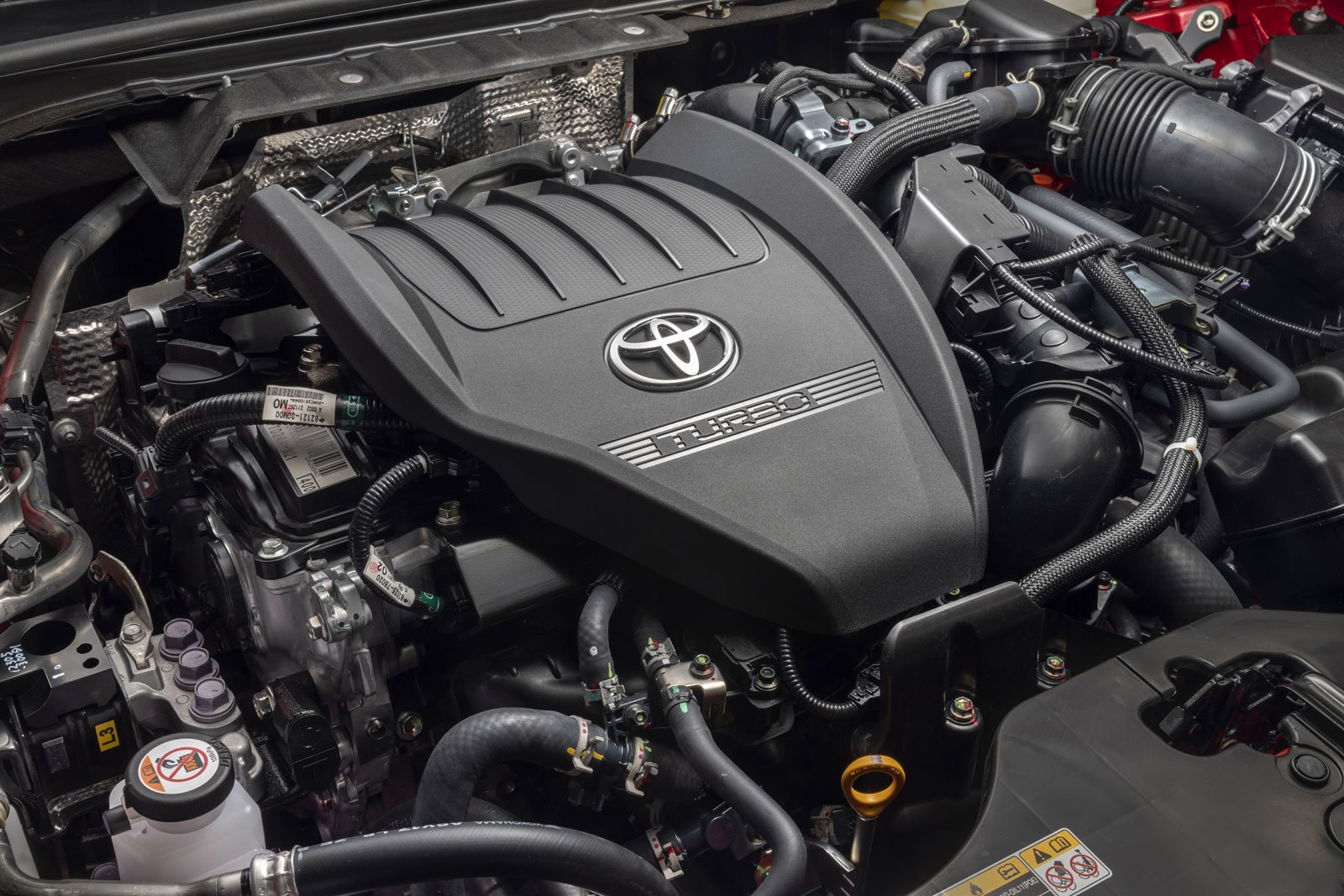 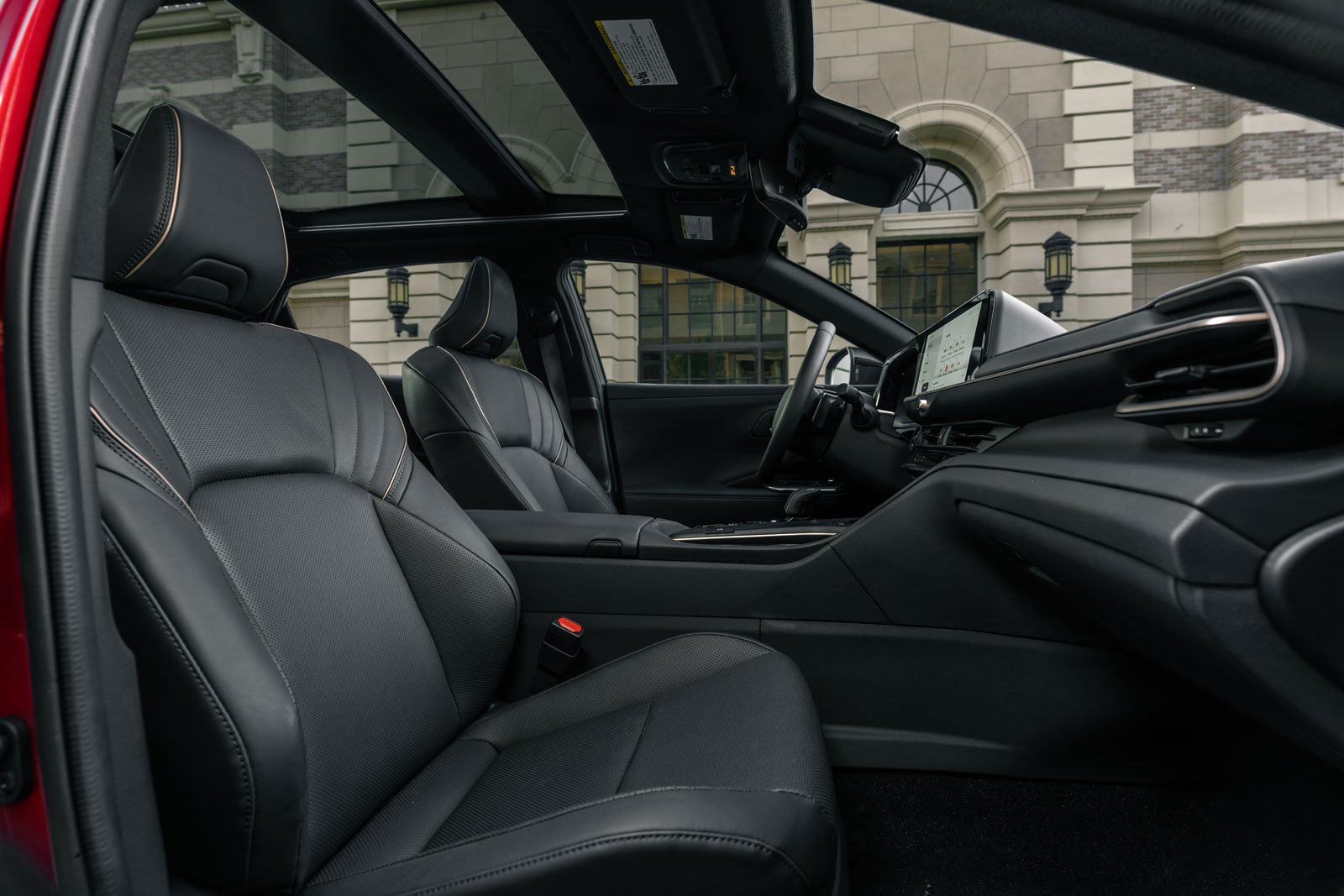 High-riding liftback sedans are not very common in North America, but they are in other markets such as China and in Europe. The 2023 Toyota Crown will seek to succeed where the last-generation Avalon didn’t, attracting buyers interested in a passenger car, but who’d instead appreciate the higher ride height and easier entry/exit attributes of the Crown, in addition to the versatility of its hatchback configuration.

Pricing has not yet been announced, but the all-new Toyota Crown will go on sale before the end of the year. Indirect competition includes the Volkswagen Arteon (available in the U.S., but no longer offered in Canada), the Nissan Maxima, the Dodge Charger and the Chrysler 300.

100,000 Units of the Jeep Grand Cherokee Could Have Received Faulty Taillamps

The taillamps could have been damaged prior to assembly in a way that makes the marker light inoperative This also affects the longer...
Read more

Brabus is a German tuning company that works closely with Mercedes-Benz Usually, Brabus versions are much more powerful than regular models The improved...
Read more

The Meyers Manx 2.0 Sees the Light of Day

The small manufacturer Meyers Manx may never have reached the size of the industry giants, but that hasn't stopped it from making its own...
Read more

The US Senate passed a law that will make many EVs ineligible to incentives, including those from Rivian and Fisker Reservation holders can...
Read more
Previous articleThe Lamborghini Huracan will Become a Plug-in Hybrid Next Year
Next articleHyundai Motor’s N Brand Unwraps Two Fantastic Electrified Concepts