The Nissan LEAF can be credited with introducing North Americans to the electric car. When the first-gen LEAF hit the market back in 2010, we had hybrids and even plug-in hybrids, but no fully-electric vehicles.

Today, the LEAF actually has quite a bit of competition with more and more automakers looking into the EV segment. Sales aren’t necessarily keeping up with the increase in electric cars offered to customers, but interest and curiosity are growing.

Introduced last year, the 2019 Nissan LEAF sits half-way between the Chevrolet Bolt and other all-electric vehicles in terms of range with 241 kilometers (151 miles). The Bolt has 383 kilometers (238 miles) while the Hyundai IONIQ and Volkswagen e-Golf promise 200 kilometers (124 miles).

In our comparison of the Bolt, LEAF, and e-Golf, we called the Nissan the winner because of its overall balance. Sure, it has less range than the Bolt, but how far do you really need to travel on a daily basis, really?

We also like its impressive cargo capacity and overall versatility. The LEAF has the most accommodating trunk of any full EV, and one of the most spacious interiors as well. We also like how Nissan moved away from the alien spaceship design them of the previous generation and gave the new LEAF a traditional albeit modern and elegant interior. 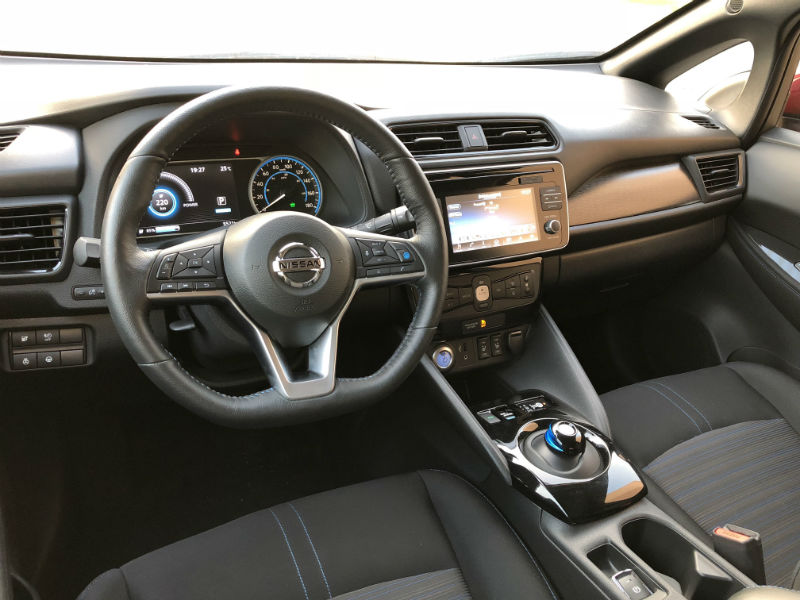 The LEAF served as the showcase vehicle for two recent Nissan technologies, ProPilot Assist and e-Pedal. The first is an active safety suite that’s a step above standard driver assist systems found in this price range, and certainly in the EV segment.

A lane-departure prevention system keeps you centered in your lane, and the LEAF can brake to a complete stop if needed to prevent an accident.

The e-Pedal has been widely publicized by Nissan, but it’s not really any different from what you find in just about any EV. It’s a one-pedal system that gives you the ability to both accelerate and brake using just the accelerator pedal.

When you lift your foot, the LEAF slows its momentum with almost the same force as using the brake pedal. It works great, it’s just not unique to the LEAF.

Charging the LEAF’s 40.0-kWh battery takes 7.5 hours on a 240 V outlet. That’s about 90 minutes faster than the Bolt, but a solid 3 hours more than the IONIQ. Of course, you get more range than the Hyundai, and less than the Bolt.

Costing about $7,000 less than the Chevrolet Bolt, the LEAF is about the same price as the IONIQ despite having more range. It’s also priced competitively with the e-Golf which also has less range.

As the pioneer of electric vehicles in North America, you know the LEAF is one of the favorites to win Best Electric Car 2019. Stay tuned.

The first production unit of the Lightyear 0 rolled off the assembly line yesterday. About 150 pre-orders have been received according to the...
Read more
Previous article2019 Audi A4 vs 2019 Mercedes C Class Quick Comparison
Next article2019 Mazda CX-5 Gets New Turbo Engine and Signature Trim