News Do Patent Drawings Mean Mazda is Building the RX-Vision?

Do Patent Drawings Mean Mazda is Building the RX-Vision?

Recently uncovered patent filings from Japan make it look like the brand is planning to bring a new sports car to market. That or some Mazda engineers have found a way to improve crash safety while at the same time improving rear suspension rigidity.

The patents were posted to Jalopnik after a reader found them on a Japanese blog. There are 14 in total, and if you want to read through them, be prepared for loads of boredom. What’s interesting is that the vehicle used for the illustration looks a lot like what the 2015 RX-Vision concept would look like as a bare shell. 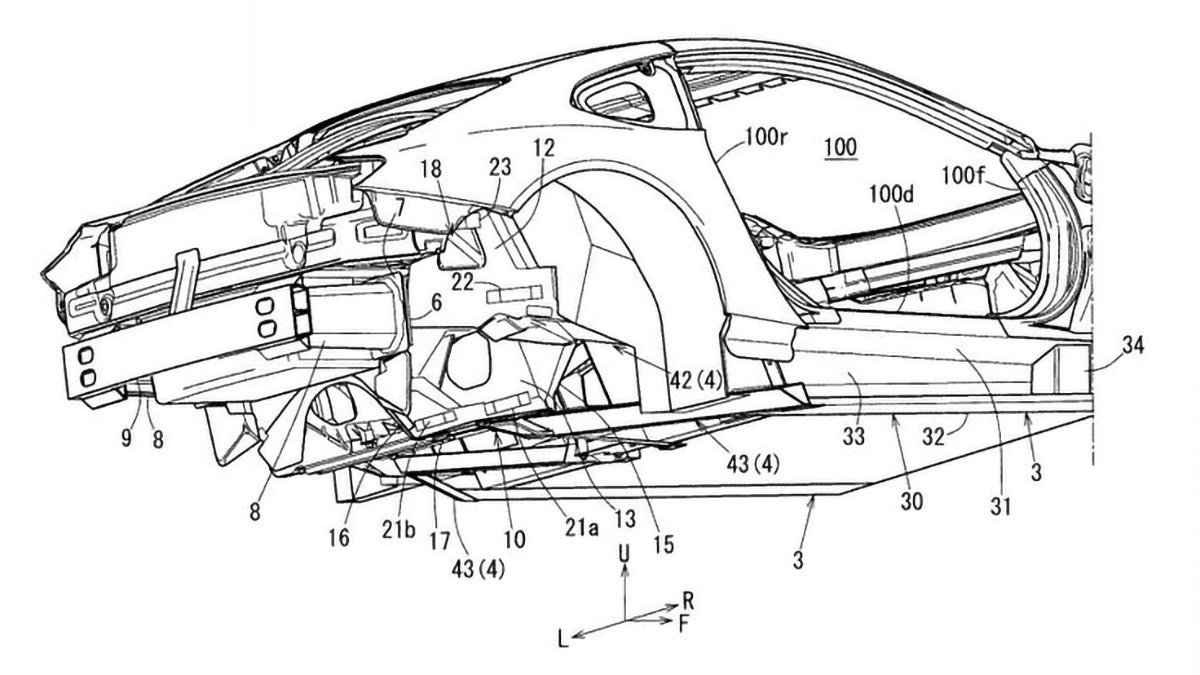 It suggests, or at least gives us hope, that Mazda is planning on bringing a version of the RX-Vision to production. After all, why else would they be doing engineering work on such a vehicle?

But a patent isn’t usually applied for just for the shape of a vehicle. It’s for the engineering underneath, something that does a job in a new way that the engineer responsible wants to protect.

Through Google Translate, this patent summary says that it is intended to address a particular problem: “to secure support rigidity of a rear suspension and effectively transmit a rear collision load from a rear side housing to a coupling body of a side sill and a pillar.”

It then goes on to describe how they’ve done it, going at length into the details of how different pieces of metal join in a way to transfer crash forces and increase rigidity. We’ll sum it up by saying there are many links joined in particular ways to achieve the desired result. If you want more, click the link to the patent higher up.

Is Mazda actually planning a new flagship sports car? We hope that they are, of course, especially if it looks like the RX-Vision. But, it seems more likely that Mazda is just doing what it does best, making a car that drives better, and is using the RX-Vision for the patent drawings because it’s cool. We’ll have to wait and find out which one happens.

They have sold their 200,000th EV in the US. They now join Tesla and GM who’ve already run out of credits. The question is...
Read more
Previous article2021 Porsche 911 Targa 4S Review: Posh-a 911
Next articleSuper-Capacitor-Like Aluminum-Ion Battery Cells Charge Extremely Fast and Offer More Range