Yes, there will be a Dodge EV muscle car.

Now that Stellantis is fully formed has assessing the future of all its brands, Dodge has obviously kept its mission as the auto giant’s performance marque for North America.

Although the Dodge is still riddled with a seriously aging lineup of vehicles, at least one new product has been confirmed, and it’s a fully electric sports car. Here’s what to expect from the Dodge brand in 2022.

One of three remaining nameplates, the Dodge Challenger is back for 2022 with minor changes. The Challenger SRT Super Stock and its 807-horsepower, supercharged 6.2L V8 engine soldiers on, while SXT, SXT AWD, GT and GT AWD trims are equipped with a more sensible 303-horsepower, 3.6L V6. The Challenger R/T is blessed with up to 375 horsepower thanks to its 5.7L HEMI V8, and the R/T Scat Pack in regular and Widebody configurations benefit from a 485-hp 6.4L V8. The SRT Hellcat and SRT Hellcat Widebody get 717 hp with the blown 6.2, while the SRT Hellcat Redeye and SRT Hellcat Redeye Widebody rely on 797 hp. An alarm system has been added this year, and two appearance packages can be specified on select trim levels: SRT Black and SRT Orange.

The Dodge Charger boasts a similar trim level and powertrain lineup as the Challenger. SXT, SXT AWD, GT and GT AWD variants get the 3.6L V6 with 292 or 300 horsepower, the R/T gets the 370-hp 5.7L V8, the Scat Pack and Scat Pack Widebody get the 485-hp 6.4L V8, The SRT Hellcat Widebody gets the 717-hp supercharged 6.2L V8 and the SRT Hellcat Redeye Widebody rips the pavement with 797 horses. An alarm system is new, as is the aforementioned SRT Black and SRT Orange appearance packages.

But wait. These two musclecars might have an expiry date, but they won’t be going away without a fight. Stellantis announced the Jailbreak models of the Dodge Challenger and Charger, which open up full access to all of the brand’s personalisation options. This option package costs $995 in the U.S., and unlocks 807 horsepower on the SRT Hellcat Redeye Widebody variants. 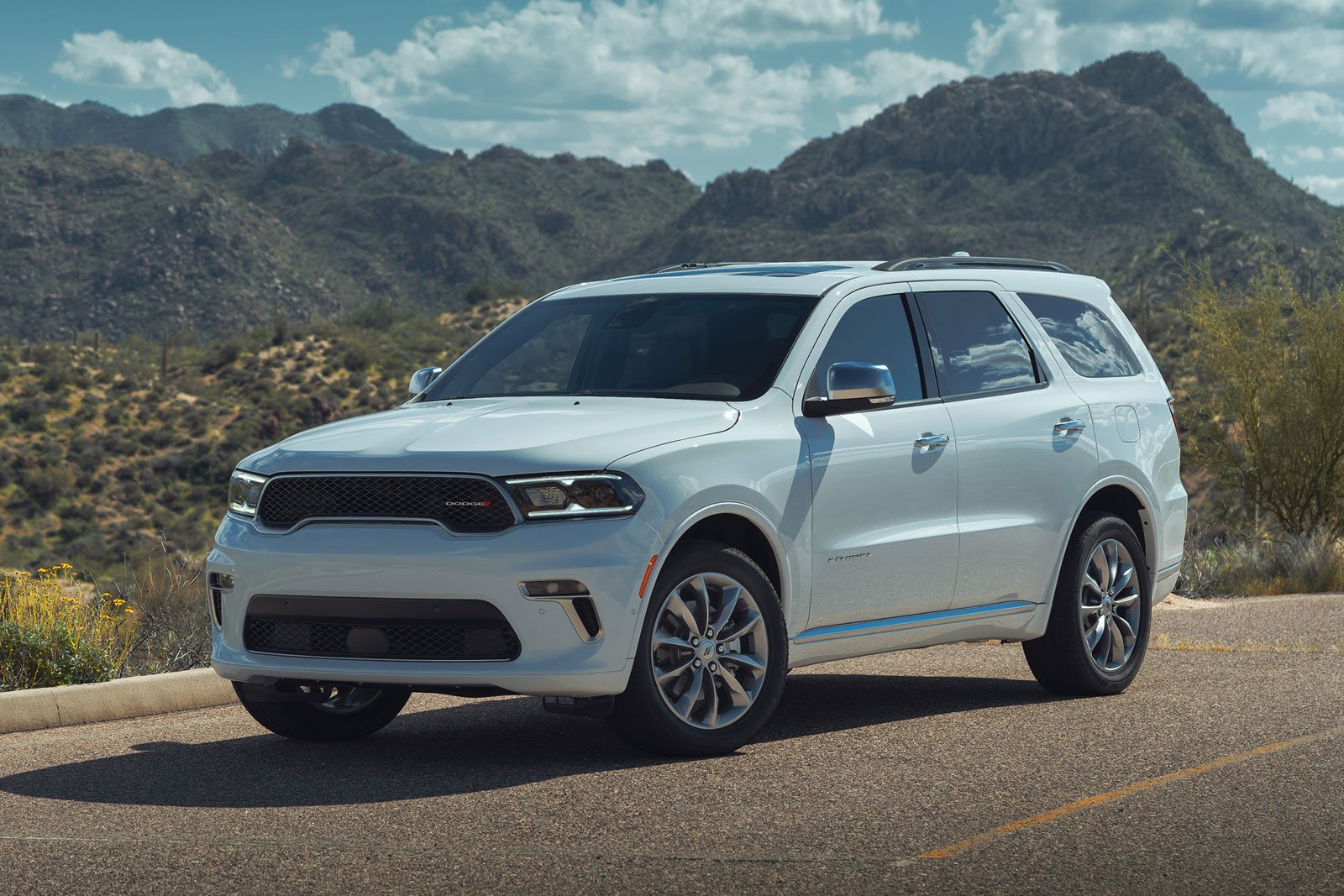 The Dodge Durango Hellcat is gone, as it was a one-year-only deal, but there’s still the Durango SRT 392 with its 475-horsepower 6.4L HEMI V8 and 8,700-pound towing capacity. Families not in a hurry might also like the SXT, GT and Citadel variants with a 295-hp 3.6L V6, as well as the R/T and its 360-horsepower 5.7L V8, and the latter can also be selected on the Citadel as an option. AWD is available in the U.S., standard in Canada, while the eight-speed automatic transmission is fitted across the board. For 2022, blind-spot monitoring and rear cross traffic alert are now standard, while the SXT and GT get more standard features. The Canadian-spec Citadel also boasts more equipment such as 20-inch Satin Carbon wheels, heated and ventilated Nappa upholstery and a slew of new advanced safety systems, while the Canadian-spec SRT 392 gets more advanced safety gizmos as well. Meanwhile, the optional Blacktop Package adds the performance hood on the GT trim as well as P265/50R20 rubber on GT and R/T variants. In the summer of 2022, a Durango R/T Hemi Orange was announced, featuring and orange and gray appearance, 20-inch Black Noise wheels as well as orange interior stitching.

The Mopar ’22 Durango is a limited-edition SUV, with only 200 units earmarked for the U.S. market and 50 for Canada. It features the 5.7L HEMI V8, can be painted in either DB Black or White Knuckle paint, and will feature blue contrast trim and striping. Order books for the Mopar ’22 Durango open in the first quarter of 2022.

Alas, the mighty Hellcat V8 will likely be laid to rest in 2023, and the 5.7L HEMI V8 could be replaced by a turbocharged 3.0L inline-six engine that could be called the GME T6. Another rumour is that the Dodge Journey would be replaced by the Dodge Hornet in 2023 as a second, smaller crossover in the brand’s lineup.

Last but not least, as part of Stellantis’ $35 billion in investment in new stuff including EVs, there will be a Dodge fully electric muscle car coming in 2024.

According to a detailer, panel fit has gotten worse. Rivian is ramping up production and it looks as though corners are being cut. Assembling...
Read more
Previous articleThe Stunning Chrysler Airflow Concept Bows at CES 2022
Next articleNew Track Mode Comes to the Tesla Model S Plaid