Dodge Challenger Thief In Illinois Gets Stuck In Dealership Doors 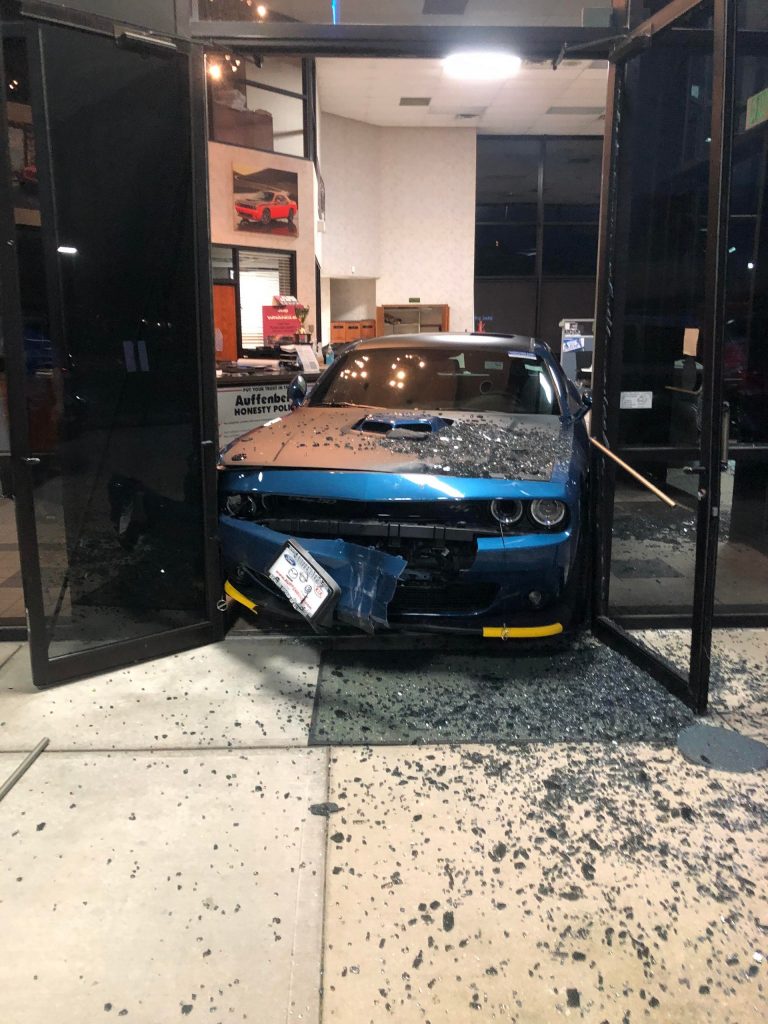 Driving through the dealer' window with the Challenger didn't quite work

This wasn’t just any Challenger either, it was a new 50th Anniversary Special Edition. Still, special edition or not, the car couldn’t make it through the dealership’s doors. As you can see in the picture here posted to Reddit, the Challenger shattered glass and its front bumper, but the doors held.

From the looks of it, there wasn’t much clearance in front of the doors to build up speed which didn’t help.

There were more than one suspect sought by O’Fallon police. The thieves had apparently tried to steal cars in a Home Depot parking lot prior to making their way to the Dodge dealer.

There, they broke into the key box and took off with the poor Challenger. After realizing that even a Hemi V-8 wasn’t enough to clear a solid steel door frame, the suspects took off. Police are still looking for the culprits.

This has been a tough month for Dodge Challengers. Rioters during the George Floyd protests in San Leandro, California took off with over 70 cars including Challenger Hellcats just a week ago.

Looters Hit Dodge Dealer in California, Make Off With Hellcats

These include a satin black painted hood, LED-illuminated “50” logos, special 20-inch wheels, and a unique grille among other features. The Challenger’s entire lineup of V-8 engines including the Hellcat powertrain are available as well as the 3.6-litre Pentastar V-6.

Tesla recently announced a 20% price cut for all of its models, including the entry-level Model Y. This version of the electric SUV...
Read more
Previous articleThe 2021 Subaru Crosstrek With The 2.5-litre Boxer Engine Is The One We’ve Been Waiting For
Next article2021 Ford Mustang Mach 1 Could Replace Shelby GT350 With 525 HP