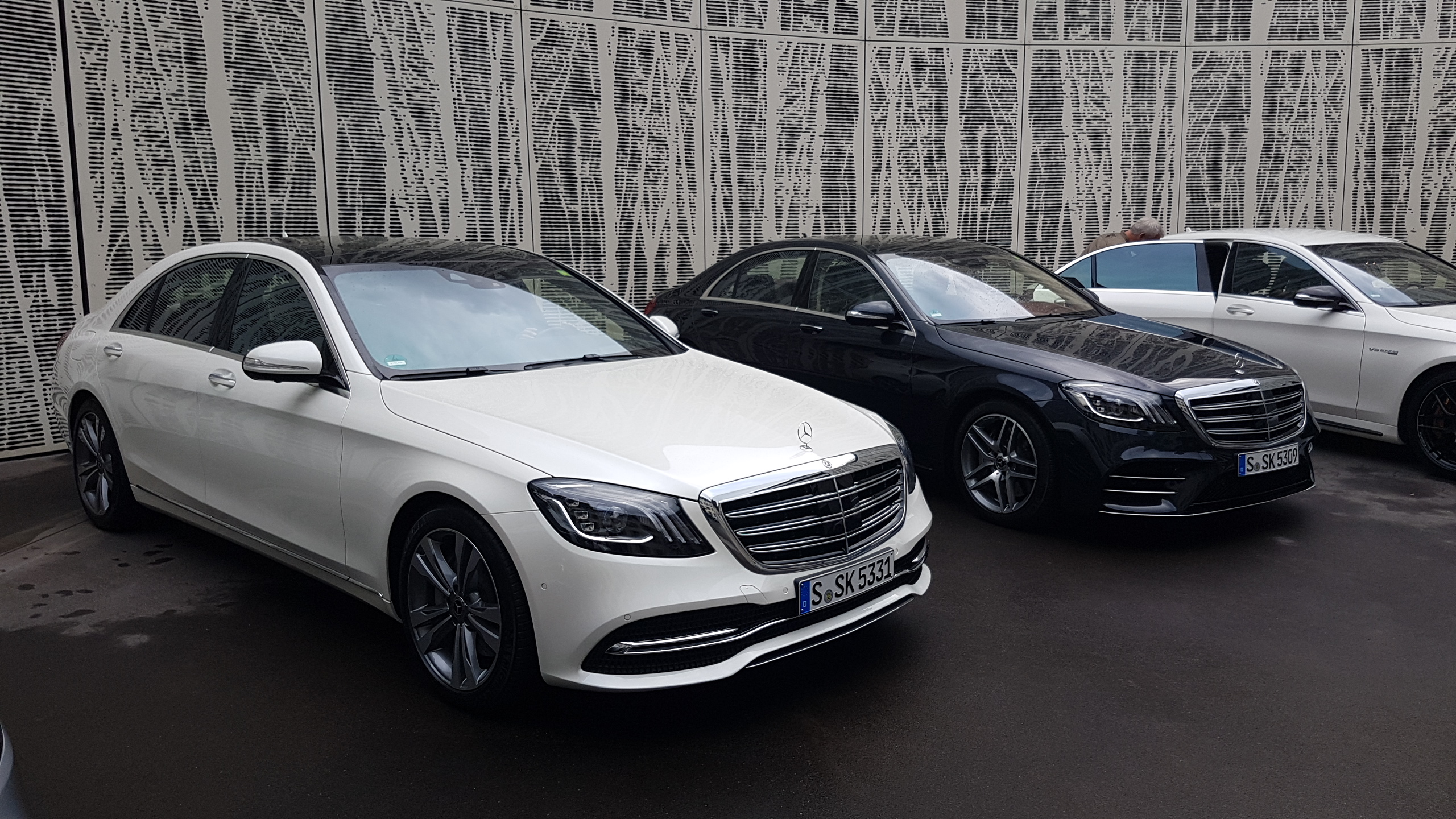 For Mercedes-Benz, the 2018 S-Class is the benchmark that serves to showcase the brand’s refinement, luxury and technology features. The German manufacturer describes it as a brand new car hidden behind a well-known design, and when we take a look at the various features, technologies and innovations incorporated in the 2018 S-Class, one can only agree.

Obviously, consumers are the ones who will decide at the end. What is certain, however, is that the new flagship Mercedes-Benz sedan covers all the bases with regards to the traditional needs of buyers interested in this segment.

They are looking for absolute refinement to go along with safety, comfort and connectivity technologies that are useful, exclusive and that will impress their neighbors. The horsepower count under the hood is more or less important, but they do want a fast car that reacts as soon as you press down on the accelerator. In addition, they want a cabin built with luxurious materials and an impeccable finish that is also spacious and accommodating. Ultimately, they do not want to compromise. 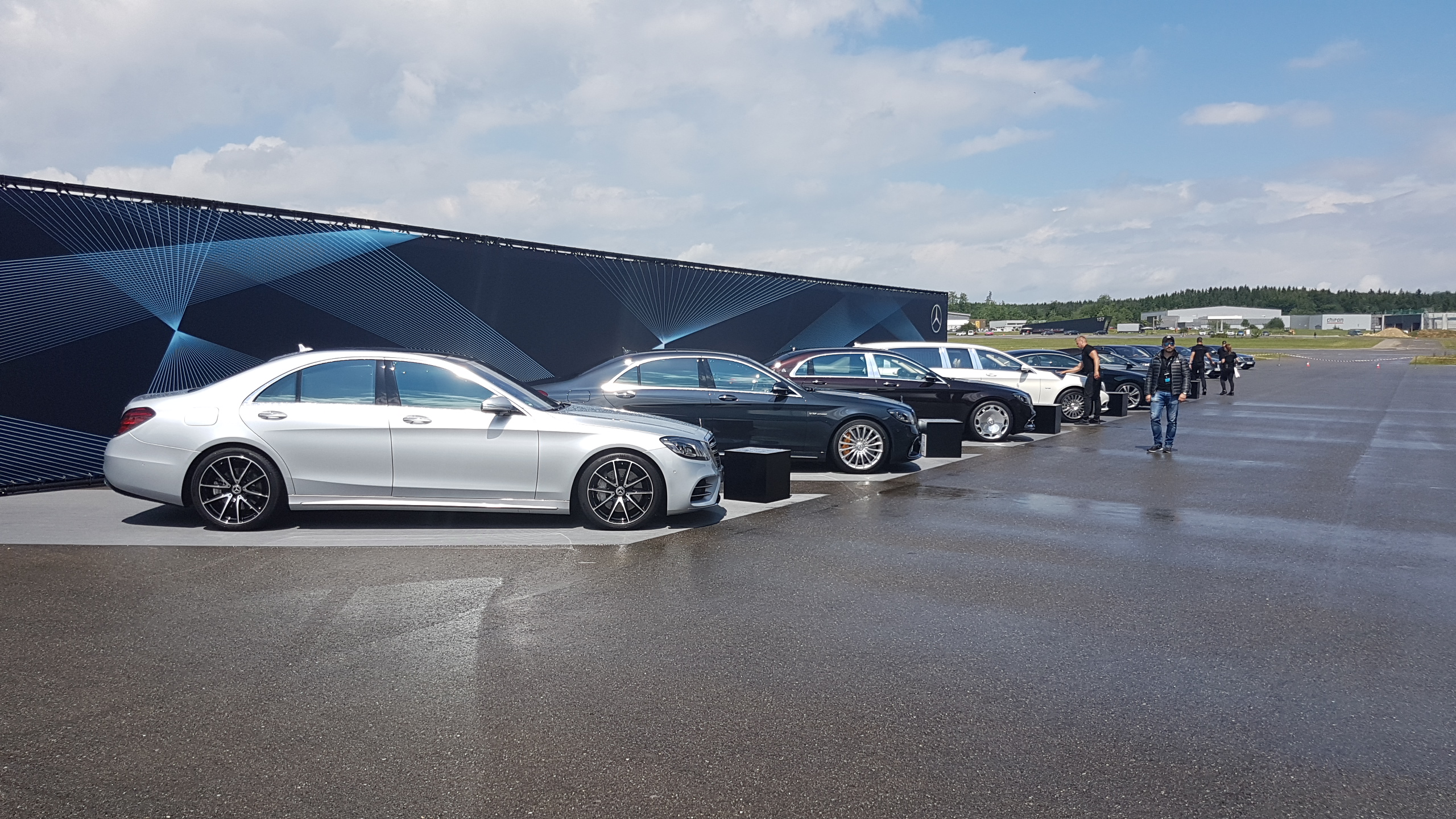 All this, they will find it in the new 2018 S Class which will hit the market later this year. During our first contact with Benz’ new full-size sedan in Zurich, Switzerland, we got to discover two versions of the model, the 2018 S 560 4Matic, and the Mercedes-AMG S 63 4Matic +. For this article, we focus on the first while the AMG version is covered in a second text.

The 2018 Mercedes-Benz S 560 4Matic is in my opinion the ideal version offered in the new S-Class range. Let’s be clear, I love the S 63, but it’s the kind of car I would want to push to the limit on a track and floor it at every light in order to enjoy its performance as much as possible. But that’s me, and many consumers in this segment have no desire to do any of the shenanigans auto journalists would try to pull with a 603 horsepower car. As a point-A-to-B-car, the S 63 is a little too much.

In contrast, the S 560 4Matic offers a perfect balance between comfort and performance. Powered by a twin-turbo 4.0-liter V8 engine, it puts 469 horsepower at your disposal, enabling it to reach 100 km/h in less than 5.0 seconds. So you have plenty of power and you can pass any other car on the road with a simple flick of your right foot, but the S 560 is always solid, stable and in control.

My colleague and I reached about 230 km/h for a few minutes on the famous German autobahn, and even at such a crazy speed the S 560 gave us a feeling of perfect control enhanced by a level of stability that very few cars could match at that velocity. 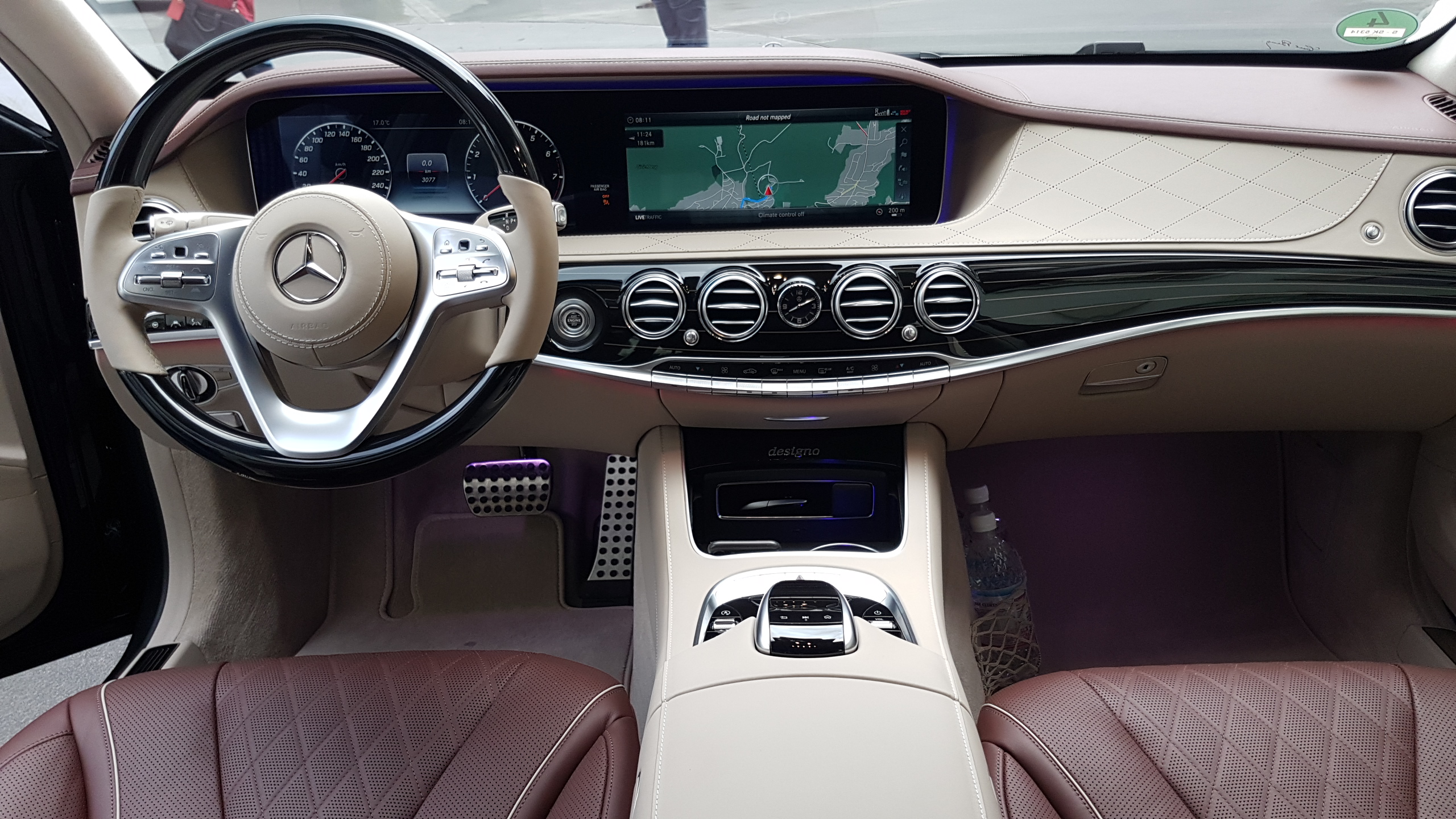 Ride comfort is also on point, as is the interior’s quietness. I had the opportunity to drive two Rolls-Royce models before I flew to Switzerland to drive the new S-Class, and I confirm that the level of refinement found in the S-Class is really not far off what the British automaker has to offer.

For me, the 2018 Mercedes-Benz S-Class represents the perfect balance between comfort and sportiness, and the S 560 is the most convincing example.

The DYNAMIC SELECT driving modes can be adjusted to suit your driving style and the sedan is now able to adjust its speed automatically in turns depending on the driving mode you have chosen.

In combination with its active steering system that automatically keeps you between the lines (the steering wheel will literally rotate under your hands), you have a car that is ultimately self-driven, except that you must keep your hands on the steering wheel otherwise the systems are deactivated after a certain time.

The Mercedes-Benz S 560 4Matic 2018 will be available with a short ($ 115,200) or extended ($ 124,400) wheelbase. The latter offers a more spacious interior, of course, and if you opt for the executive rear seats, you are not far from what you would find in the business class of an international flight. The seats are ventilated and heated, they offer a massage function, they can lie practically horizontally and there is a cushion that supports the passenger’s legs. 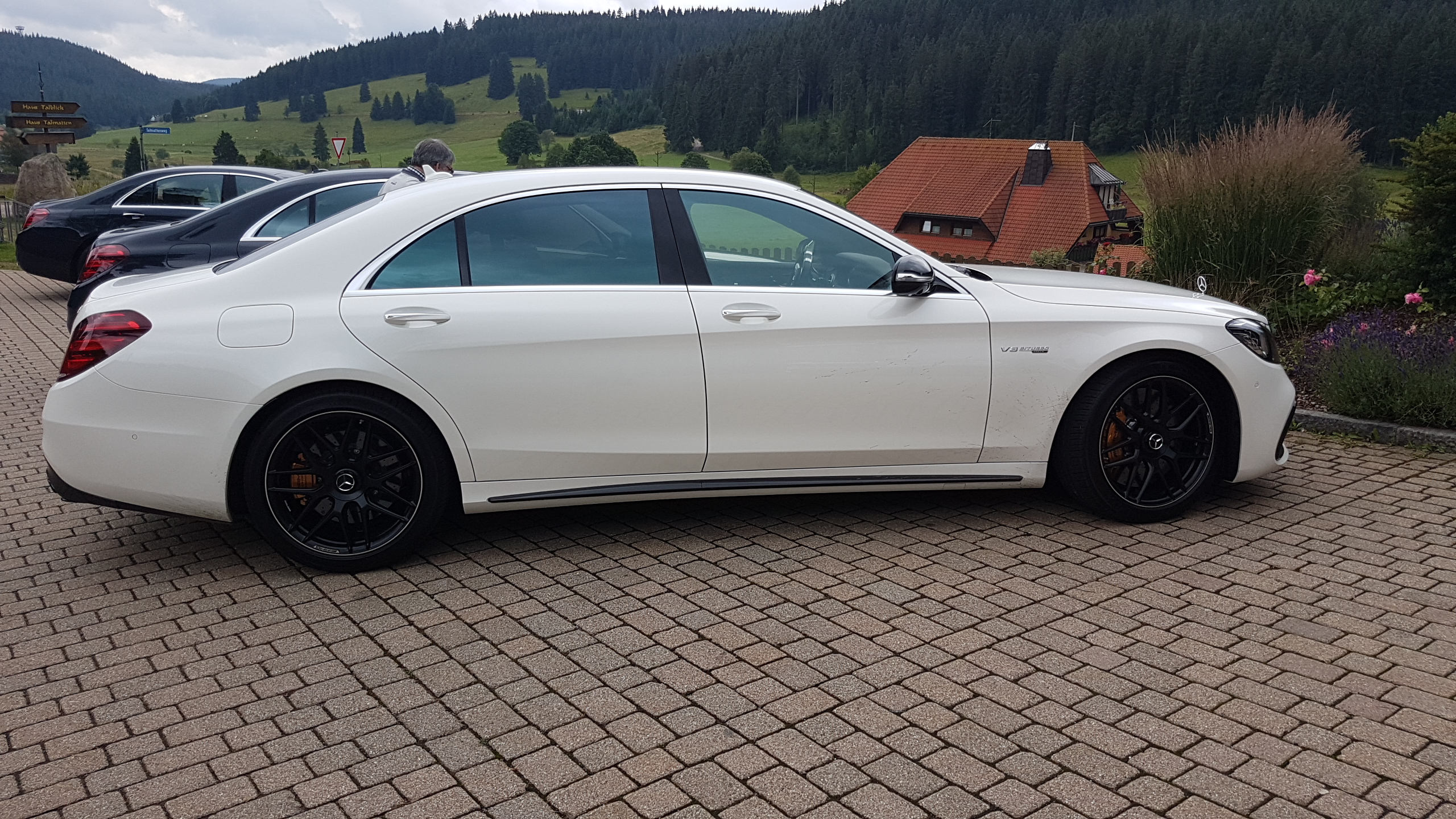 Packed inside the new S-Class are a wide range of advanced technologies, many of which are exclusive to Mercedes-Benz.

Take, for example, the ENERGIZING system which takes control of the air conditioning, the seats and more specifically the ventilation and heating functions of these seats, the audio system and the lighting in the passenger compartment to create different “moods” inside the cabin like the WARMTH mode, or the REFRESH mode. There is also a setting called JOY that activates one of the many massage programs in addition to playing a lounge-type music and making the interior lighting yellow. Oh yes, there is also a training mode that displays different exercises that you can perform while driving in order to stay in shape.

Of course, this mode will remind you to never perform the exercises if they prevent you from driving safely. We are in another world here, but that’s exactly where a car like the S-Class needs to be. 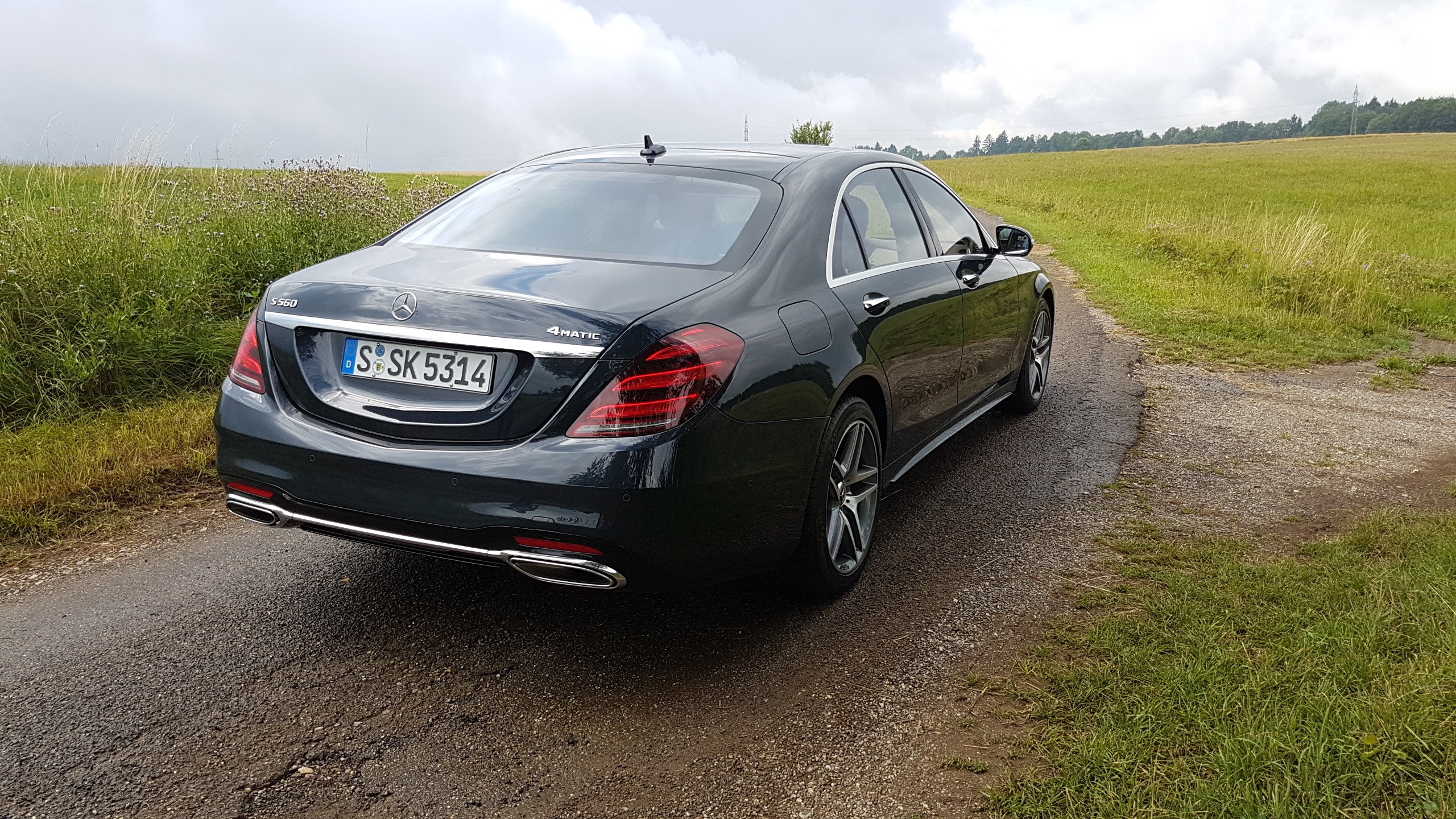 Then there are the safety and driver assistance systems. Describing everything offered in the S-Class would be too long, but know that the car anticipates and brakes for cars and pedestrians in front of it, whether they suddenly appear or have been there for a while. The S-Class can swerve to avoid an obstacle automatically, in addition to being able to change lanes for you after you turn on your turn signal.

For 2018, the S-Class is equipped with a mapping system that joins forces with the cameras and radars already scanning the road in front of you in order to optimize performance and pick up on potential dangers.

If a collision is inevitable, PRE SAFE SOUND emits a sound that protects your ears from the noise damage caused by the accident, while other systems turn on to lower the windows and unlock the doors in order to make it easier to exit the vehicle.

The 2018 Mercedes-Benz S-Class can also park on its own in all directions, and it will automatically brake if you back out of your parking space as another vehicle approaches perpendicularly.

All this is only a glimpse. Some of the technologies found in the new 2018 S-Class are exclusive while others are more widespread, but the end result is a car that offers everything we could want from a luxury sedan with more equipment and features than its already very well-equipped competition. 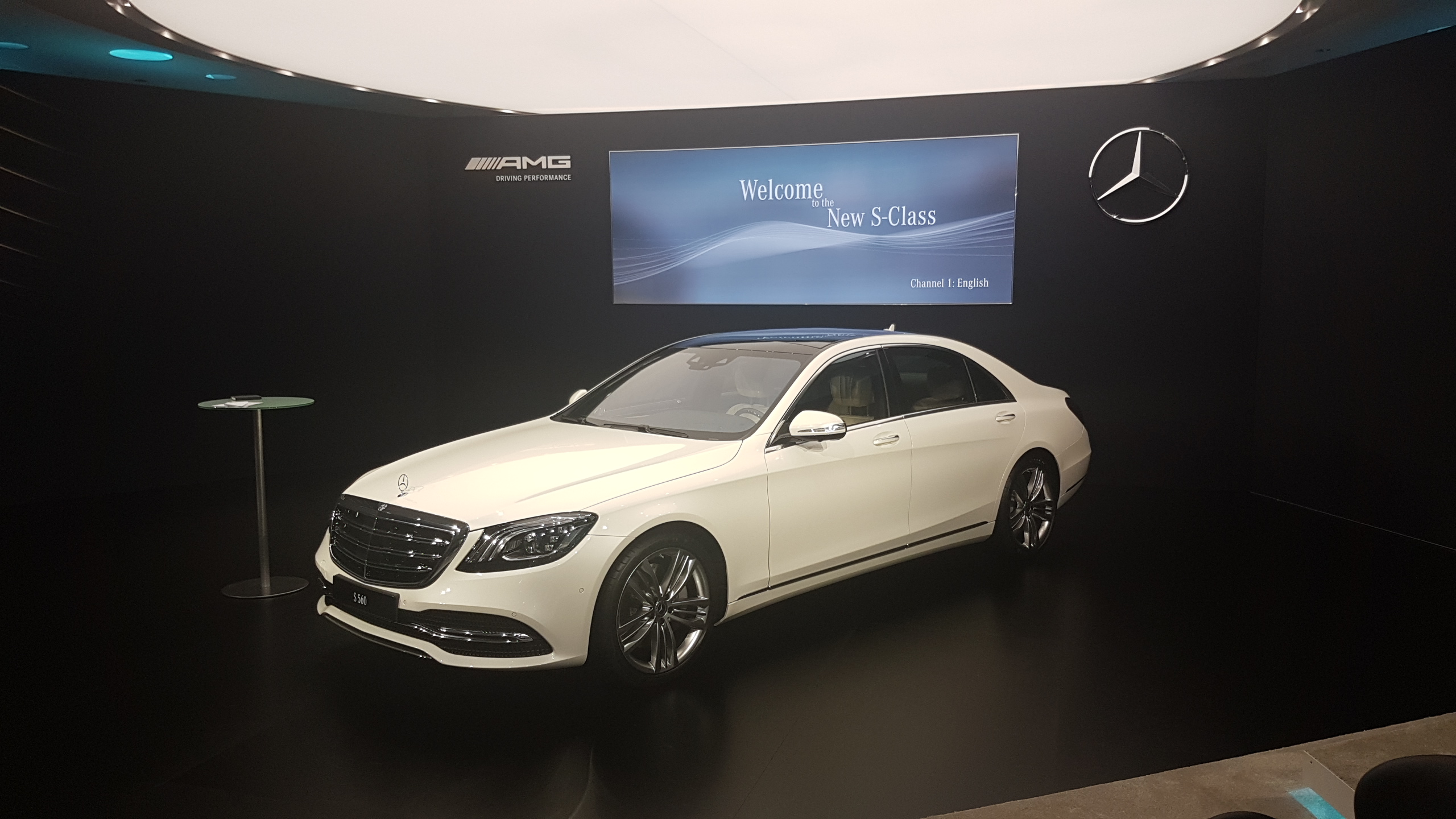 I can’t really say anything bad about the new Mercedes-Benz S-Class and the S 560 in particular.

Oh, if I wanted to, I could tell you that reliability may prove to be precarious because of the ubiquitous technologies in the car, but Mercedes-Benz, like its German competitors, have been making great strides in that department over the last few years. And what about the cost of replacing all these technologies? They will be stratospheric, there is no doubt about that. But who plans to keep their S Class pass the warranty?

Is the art of driving lost in an S Class? Sure. We are a few adjustments away from a 100% autonomous car and we feel disconnected from the road, our wheels and our engine. But even a 7 Series isolates us from the road, so the competition isn’t doing much better in that regard.

In short, the new Mercedes-Benz S-Class 2018, for what it is and what it needs to be for its owners, is a very well-engineered and designed luxury sedan.