We’ve already seen BMW take a stab at the electric car with the oddball i3. The short-range EV offered a cool interior and some high-tech carbon construction, which BMW sold us with the promise that it would influence and improve its next-generation of dedicated EVs when those vehicles arrived.

With the iX, those dedicated EVs have arrived. Like BMW promised, it is loaded with i3 tech like carbon fibre cage construction and an interior that is a sharp departure for an otherwise solemn automaker. Completely unlike the i3, this is a crossover with serious interior space, a fully functional electric range, and power equal to a V8-motivated X5.

Charging on the xDrive50 happens at up to 200 kW, though that figure drops sharply after about half charge. BMW says it will take 35 minutes to get from 10 to 80 percent on that charger while 11 kW L2 home charging should fill it in 11 hours.

Look at the cabin and you’ll see an almost complete lack of controls. Instead, it has a new and latest version of iDrive (v8) where nearly everything is on the curved 14.9-inch screen. For once, that’s not an issue. This system is as fast as they come, with voice control that extends to hard product features like the electro-chromatic roof, and for the first time in any modern car I didn’t even look for buttons. The screen was enough. BMW has also greatly improved the accuracy and function of its gesture controls in the iX. When you’re not looking at the screen, the crystal controls for the seats and center console are stunning. 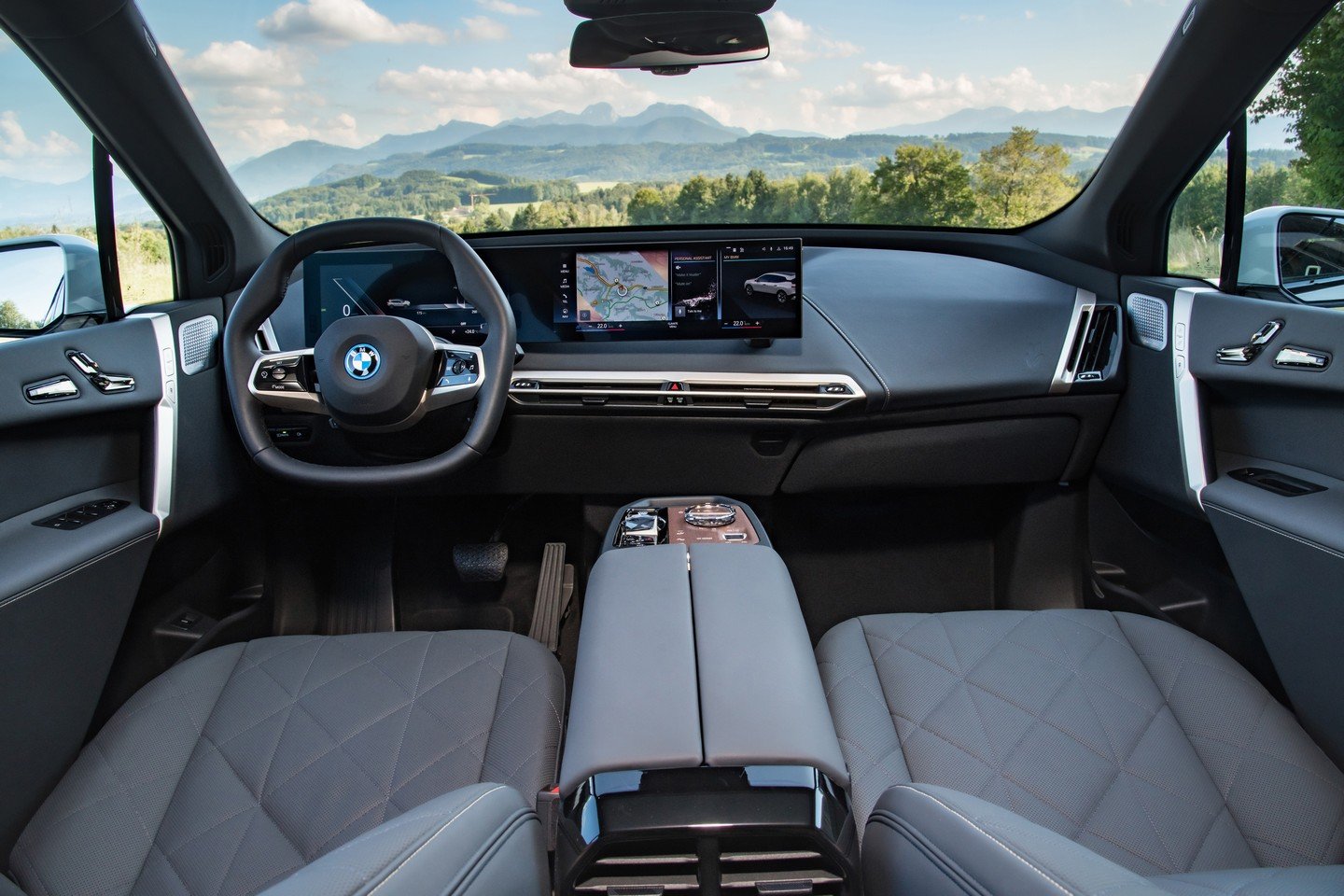 We won’t waste time on the looks of the outside of the iX, you either liked it or hated it as soon as you saw the photos. It is remarkably slippery, though (with a CD of 0.25), and the massive kidney grilles that aren’t grilles are made with a special self-healing outer layer that can make stone chips disappear with a few minutes of sunlight.

EV or not, this is a BMW, so the only question that really matters is how does it drive? On the Autobahn near Munich and the roads leading into the Bavarian Alps, it drives exactly how a BMW should.

A curb weight of 2,510 kg (5,534 lbs) puts the iX in between the 50i versions of the X5 and X7, but this new architecture handles its weight quite differently. The carbon cage increases strength around the door frames as well as the rear glass and cowl while cutting weight up top. How much stronger is it? BMW has made this their first crossover without window frames, so it’s significant. That move cuts even more weight from up high. 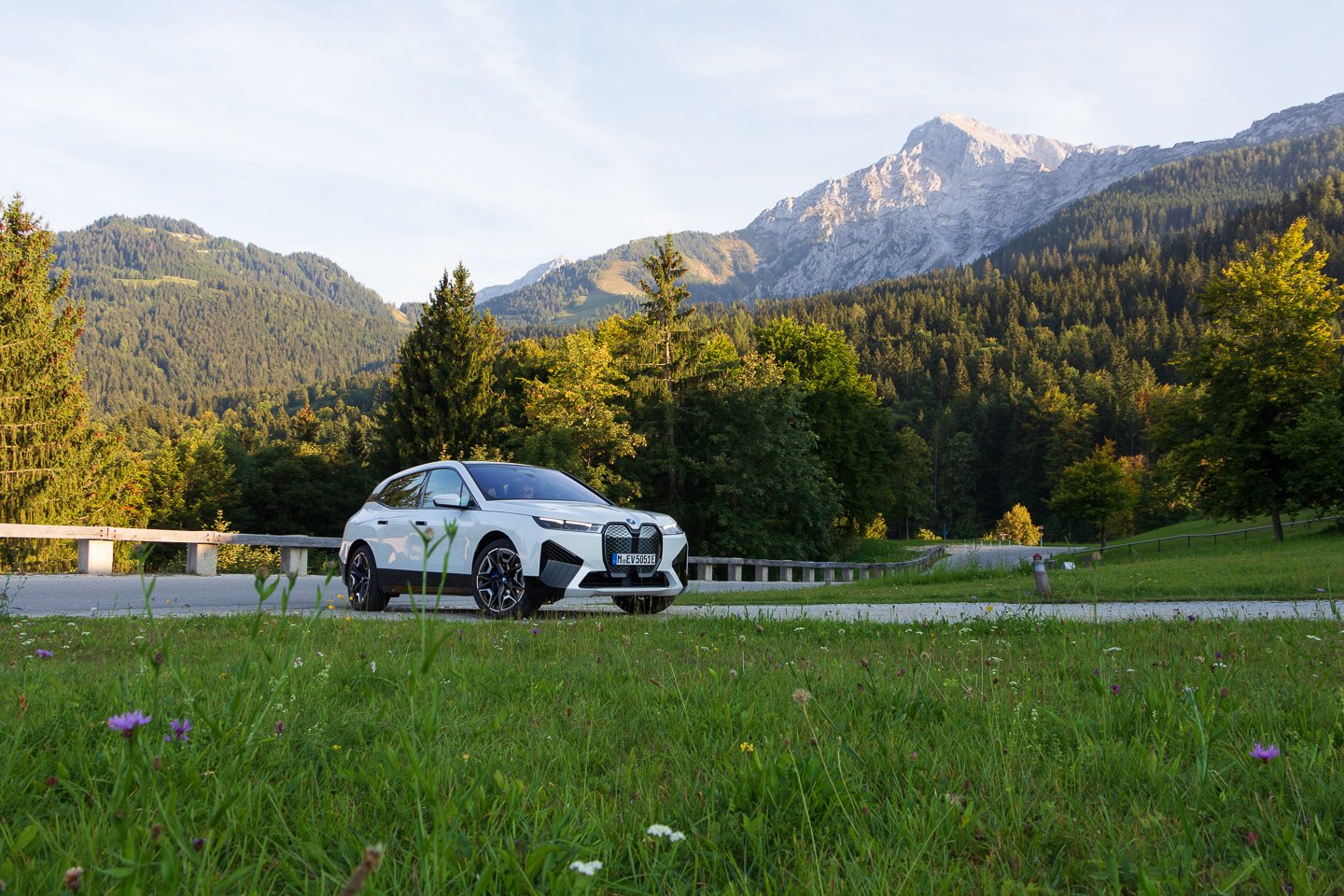 The result is an EV that feels lighter than its gas-powered siblings. Especially with the adaptive air suspension, the iX sees almost no body roll even when tossed into corners like an M440i instead of a crossover. Optional active rear steer helps slash turning circles in town – we turned a little too tightly the first couple of times – and helps make this a rock-solid Autobahn cruiser.

Steering feel is absent, as it is in almost any modern vehicle, but the weighting is near perfect. The adaptive steering builds up force in corners and turns in with an eagerness and level of precision we thought BMW had abandoned outside of its M lineup.

The iX stays nearly silent and incredibly planted all the way to its 200 km/h limited top speed. Many mainstream EVs start to fall flat once speeds near triple digits, but the iX has no problem with what we’ll call spirited German driving. Typical for an EV, the iX has a one-pedal drive mode (here called B), but in Drive uses intelligent regenerative braking to slow the SUV automatically for slow vehicles in front (when you lift off of the accelerator) and for corners, roundabouts, and even stop signs. This mode gives you the perks of one-pedal driving without worrying about engaging full regen every time you move your foot.

That flat-out highway and mountain driving showed an indicated 23.6 kWh/100 km (38 kWh/100 miles), a figure that is just outside of BMW’s estimates, but comparable with the official Canadian figures for a Tesla Model X Performance. Keep in mind that our drive didn’t take us back down the mountains and hitting the official range numbers seems easily done.

Highly adjustable seats including a thigh extension make this practically plush (with the air suspension), and while it is around X5 size outside, it has an absolutely massive cabin. Headroom and legroom, front and rear, are well beyond anything else in class. Cargo space is about 100 L (3.5 ft3) smaller than the X5 at 500L (17.6 ft3), but is still a good-size trunk.

BMW has done exactly what it promised with the tech of the i3 and i8, and with its first big deal EV. Starting from $89,990 in Canada ($83,200 in the US) and ready to start deliveries in the spring, if you’re considering a fast gas luxury SUV, the iX needs to be high up on your list.

Scientist explains how a mix of hybrids can lower emissions more quickly Says we simply don't have enough lithium to go all-EV An EV-only...
Read more
Previous articleKia EV6 Order Books Open at Noon Today for Canadians
Next articleTesla to Increase its Supercharger Network by 300% in Two Years