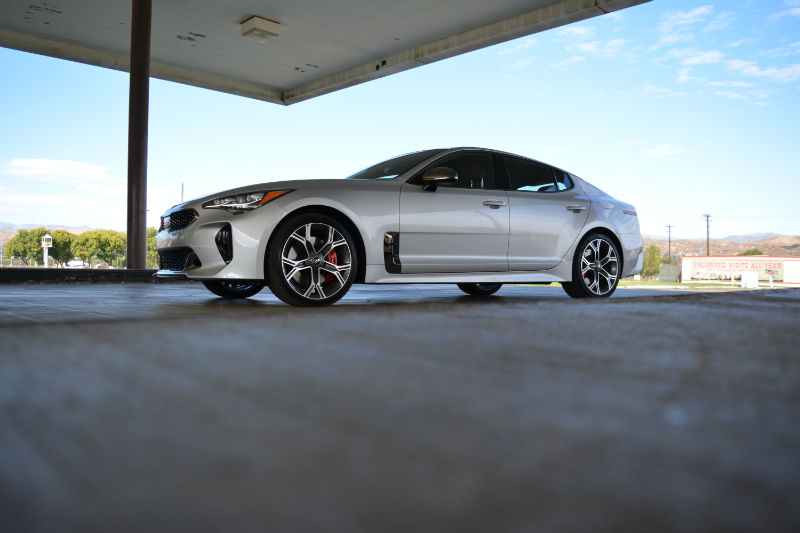 I spotted a 1999 or 2000 Kia Sephia just before I was to jump on the plane for Los Angeles to test drive the new 2018 Stinger. Kia’s journey in North America, and the world for that matter, has been an epic one over the last two decades. The Stinger, it turns out according to Kia, is all about the journey.

In what could be described as a celebration of two decades of hard work, ever improving products and brand awareness, Kia is launching their greatest car ever. It would be easy to dismiss this statement and say that the car can’t possibly be that special but the fact of the matter is that the Stinger is a giant slayer. Will it equally slay the hearts and minds of potential buyers? That is the big question.

The Stinger was the 1st ever pre-sale car for Kia and just over 130 signed up, $5,000 deposit in hand, sight unseen and with no pricing details. The horizon is very promising for the Korean brand’s new halo car and to more or less give it away, the car is spectacular. Kia’s guideline for the car was that it had to drive as good as it looks and, in my opinion, its styling outshines the drive, but not by much.

I had to constantly remind myself that the Stinger was not a sports car, rather a Gran Turismo, or GT car. The reason was simple: the car is ridiculously fast. The standard (for the moment) 3.3-litre twin-turbo V6 packs a whopping 365 horsepower at 6,000 rpm and 376 sublime lb.-ft. of torque between 1,300 and 4,500 rpm. All said, with launch mode activated, the Stinger will smash the 0-100 km/h dash in only 4.9 seconds, besting all its would-be competitors save for the Audi S4/S5 duo.

With blink-of-the-eye fast throttle response in Sport mode, the two small single scroll turbos suffer no lag, producing 26psi of boost, all of which is brilliantly manhandled by the in-house developed 8-speed automatic transmission. The variable torque splitting AWD shuffles the power in a 50/50 to 0/100 split depending on drive mode and the amount of pressure on the go pedal.

So the car is fast. It makes lovely noises, shifts crisply but it’s not a sports car. The reason why I know this comes from the suspension. The latter depends greatly on adaptive dampers, which I’ve come to absolutely love. Said dampers are on constant alert, reacting and counteracting chassis weight transitions and they do so brilliantly that is until speeds climb drastically.

The roads in and around Angeles National Forest consist of a series of tight switchbacks linked together with short straights. Unless the surface was very flat, the Stinger suffered a case of poorly decompressing dampers and springs. On occasion, the dampers’ sharp rebound unsettled the car, causing me to back off. Mind you, I was working at experiencing the Stinger’s power and strong, fade compensating Brembo brakes so it’s very likely that the average driver/owner will not face this sole shortcoming in the Stinger’s drive.

Back in 2011, Kia revealed the GT Concept in Frankfurt and it started a process that took nearly six years to complete. The final result is car that, even after two days of being exposed to it, I’ve yet to put it all together in my mind. 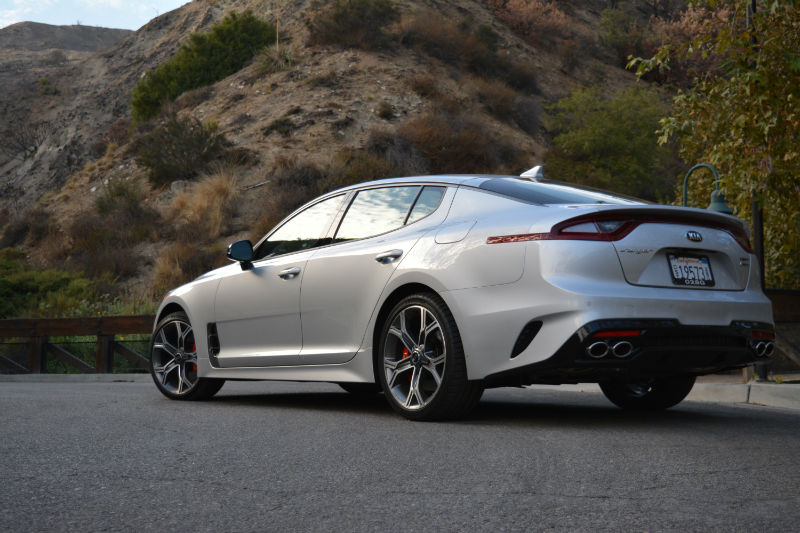 For starters, the perceived size of the car is misleading. It looks big but it really isn’t however when driven, it feels big. The Stinger’s long wheelbase, very short overhangs and low overall height give it a Porsche Panamera profile from afar but up close and comparatively, the Stinger is more than 20cm shorter while its wheelbase is scarcely 4.5cm shorter.

From all angles, the greenhouse seems to sit on top of the body that its weight flattened and widened the Stinger’s track. The front mask’s, with tiger shark grille, highlights are the headlights that are mounted on the fenders creating the floating island hood. The rear end, from a ¾ view, is my personal favorite. The quad tailpipes, diffuser, subtle rear hatch-integrated spoiler all come into play.

There’s much more to say about the shell but we do, after all spend more time in the car. Although, I could see myself pulling up a lawn chair, with coffee cup in hand, enjoying Mr. Peter Schreyer’s finest work to date.

The cabin is less of an exercise in design than a demonstration of how to do things right. The triple round vents and floating screen, all part of the center stack, are the focal points. Kia’s intent was to create a cockpit-like feel for the driver and while the driving position is spot on, this area is more sporty luxury saloon than anything else. It is very German in fact.

The tested GT Limited’s seats are superbly supportive and adjustable in many ways. They perfectly complement the array of controls just ahead of the armrest that include the heating/ventilated functions. The ergonomics are excellent in this car. All manners of important controls are accessible while the menus for the GT Limited’s 8” screen are easy to navigate. And as a big plus, the display is touch-sensitive. 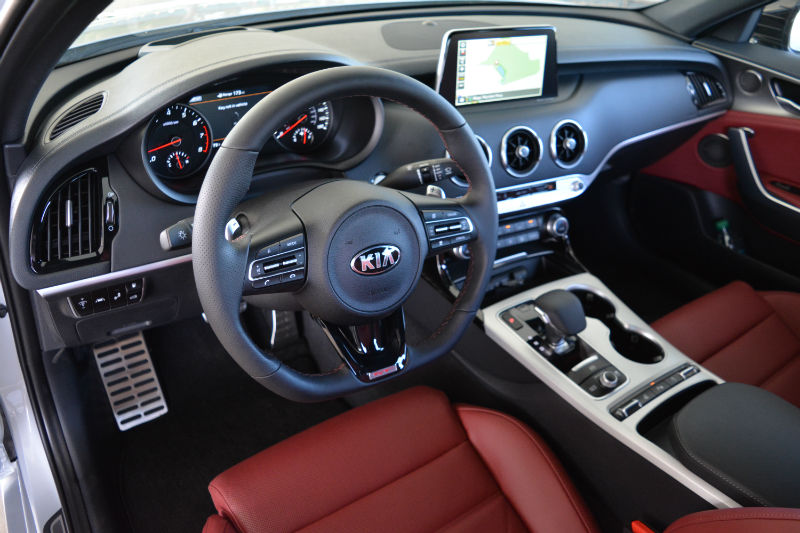 Connectivity is assured in the Stinger. Apple CarPlay, Android Auto, Kia’s own UVO intelligence (full barrage of services for the owner) and a 9- or 15-speaker Harman Kardon audio can be included.

In true GT fashion, the cabin is an inviting place to spend many hours while on the way to your favorite destination. Four occupants are treated to space, comfort and a serene yet exciting environment.

This is Kia’s first AWD car. Its responsibility as a halo car is huge as it will draw consumers into showrooms for a closer look. The hook will not only be the styling and promise of performance but the price. At $44,195 for the GT and $49,995 for the GT Limited, many will be taken aback by the content and the value proposition, true staples of the brand. And this, despite the Stinger’s impressive credentials.

Who will buy the car? Ex-Volvo, Acura, Infiniti owners perhaps. Possibly even some BMW or Audi drivers looking for a different experience altogether. Fully loaded Toyota Camry or Honda Accord shoppers? The 2018 Kia Stinger bridges a gap between mainstream and luxury brands with more kit and go than the luxe cars, for roughly $3,500 more for the GT than a new Toyota Camry XLE or about $2,500 less for at GT Limited than a base BMW 430i xDrive Gran Coupé. The new Stinger is a troubling car for other OEMs.

It will likely be called DBX S. Aston Martin says it will be the most powerful luxury SUV. It will be revealed on...
Read more
Previous articleCAR NEWS: What you need to know about the Tesla truck unveiled tonight
Next articleTop 10 under-appreciated sports cars from the past