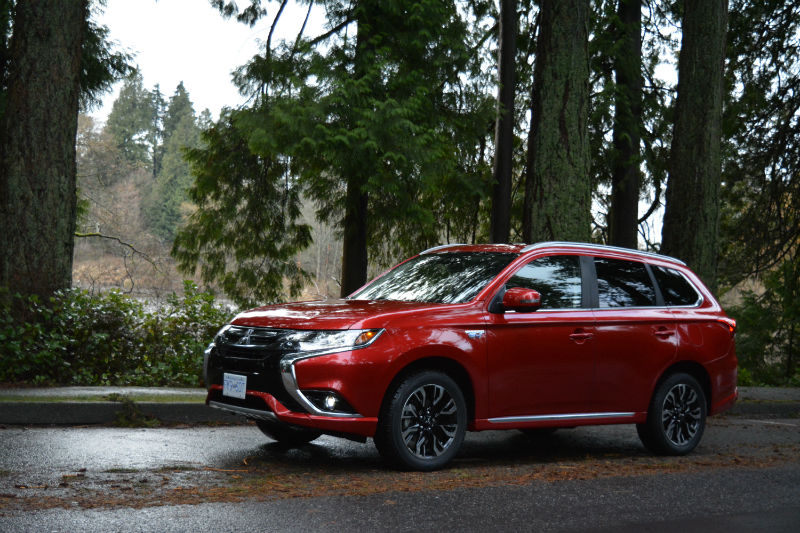 I can scarcely imagine how antsy Mitsubishi staff have been for the last few years. Despite reasonable yearly sales, the Japanese carmaker has been in desperate need of new blood in showrooms. In less than a year’s time, two new products have heeded the call but the delayed arrival of one in particular had many sweating in anticipation.

And finally, it has arrived. The long-awaited 2018 Mitsubishi Outlander PHEV is here and brings with it the title of best-selling plug-in hybrid CUV in the world, and many lessons learned by Mitsubishi from the i-MiEV and the previous generation Outlander PHEV which was available in Europe and Japan. On paper, the new Outlander PHEV ticks all the boxes not only as a “green” car but as a crossover destined to please all those that crave such things.

After driving the 2018 Outlander PHEV for a few hours, I can safely conclude that Mitsubishi has achieved their target, that is to build a comfortable, spacious and fuel-efficient utility vehicle. The bottom line is that this Outlander will respond to the majority of consumer needs and because of this and the fact that it’s essentially the only player in the game, you won’t regret your purchase. There is, however, a “but” coming.

All in one Hybrid

The Outlander PHEV’s complex powertrain features a 117-horsepower 2,0-litre 4-cylinder mated to an electric motor up front integrated into the single gear transaxle, and a second electric motor on the rear axle. Total system output is 197 horsepower and lots of torque at very low speeds. 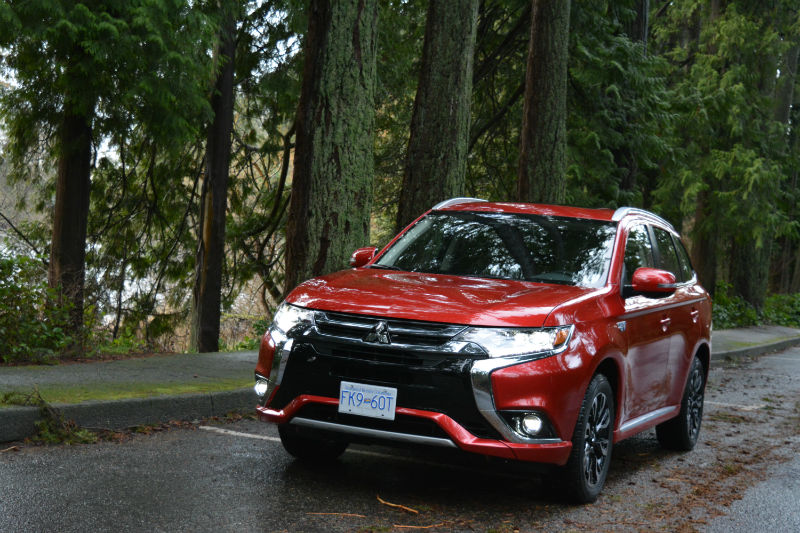 Covering ground in downtown Vancouver turned out to be nearly entertaining. The instant torque, coupled to the AWD’s instant grip made short work of streetlight-to-streetlight accelerations. The Outlander PHEV affords true EV AWD capabilities and it would have been interesting to try it out. When fully charged, the 12-kWh battery pack, located below the floor, provides the ‘ute up to 35 km of electric range. This will vary depending on loads, and ambient temperatures.

This distance can be covered in EV mode or stretched in one of two other modes. The Series Hybrid setup uses the 2,0-litre as a generator to maintain and charge the batteries while the Parallel Hybrid mode relies on the internal combustion engine with assistance from the electric motors when required.

The Outlander cycles from one approach to another on its own or the driver can manually set the tone. On top of this, the driver can specify regenerative levels by moving the shifter into “B” and selecting one of six regen intensities.

While it all this information seems heavy to assimilate, the fact of the matter is that moving the shifter into “D” and going about your daily business is entirely possible, and more than likely to be the norm.

Not for those who are in a rush

Or for those that intend to exploit the Outlander’s large trunk and roomy second row often and over longer distances. 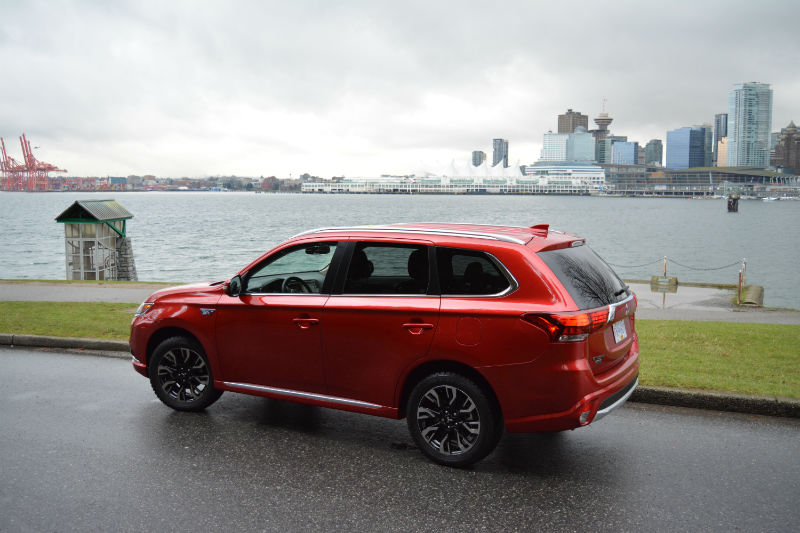 So, here’s the thing about plug-in hybrids. They need large batteries in order to boast a decent amount of range. The 2018 Outlander PHEV tips the scale at 1,895 kg (4,178 lbs.) or a whopping 285 kg (627 lbs.) more than a 3-row, V6, SE AWD petrol powered Outlander. The PHEV is brilliant in EV mode, in the city, with a good charge but the moment speed and driving demands increase, the efficiency factor decreases.

Merging onto a highway, passing manoeuvres or accelerations from 80 km/h are laboured. Even though the Outlander can run as a parallel hybrid, the system has a tremendous amount of girth to lug around. My partner and I added 180 kg (400 lbs.) to the tally and I fear what will be with a few kids, gear and, if someone decides to make use the vehicle’s 1,500 lbs towing capacity.

The ride and drive are ok, at best. Again, this is a very heavy vehicle. It is evident in the steering which is dreadfully disconnected, and despite the S-AWC best efforts, I experienced surprising amounts of understeer. At lower urban speeds, the suspension manages rail road crossings well. The V6 Outlander can at times feel sporty. This is not the case with the PHEV.

Styling inside and out

I occasionally like what Mitsubishi’s done with its vehicles of late. The PHEV lacks all subtlety, but I do appreciate the more monochromatic paint scheme over the V6. There’s little else to differentiate the two versions other than specific PHEV badging. 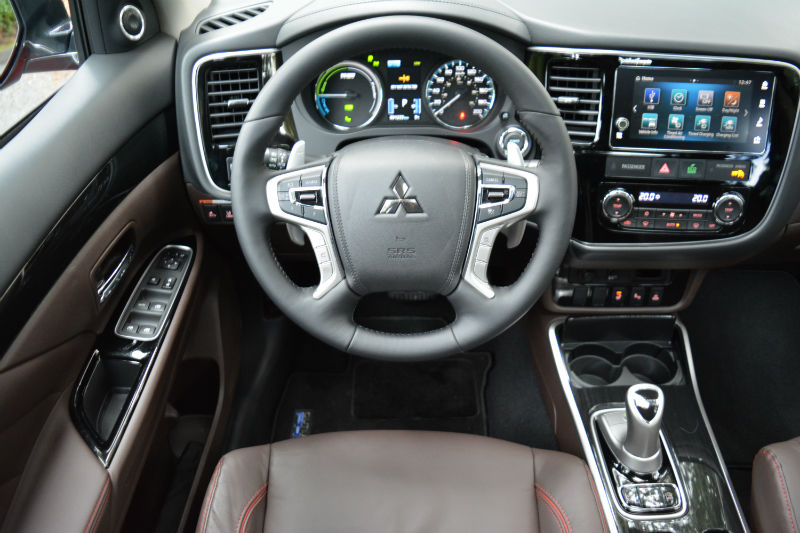 On the inside, it’s mostly standard Outlander fare. Portions of the center console feature unique details such as the shifter (functions very much like that of the Prius) and surrounding drive mode switchgear. A quick tour is all that will be needed to assimilate what’s what.

Much of the plastics on board feel and look very cheap. Fit and finish are fine. The cabin’s highlights are the cozy seats both front and back and the large boot.

Pricing, value and what to do

In my mind, there are two ways that the first two versions make sense: Your daily commute is never more than 30km and in the city, and the current existence of provincial rebates. Well, on the latter point, the $9,555 Ontario rebate.

The problem is that the Toyota RAV4 Hybrid is $8k to $9k less expensive with equal or better amounts of important features and has a roomier boot. The $4k Quebec rebate only covers half of the difference. Again, if you intend to drive with the city and in EV mode, then the Outlander is the right choice.

The 2018 Mitsubishi Outlander PHEV is quite an achievement and worthy of your attention. Make sure however that you pay attention to your real-world needs before signing on the line.

The Single Motor version is now RWD instead of FWD and it offers up to 483 kilometres of range. Sustainability improvements have reduced...
Read more
Previous articleTesla’s Semi truck caught on video
Next article5 cars that saved their manufacturer