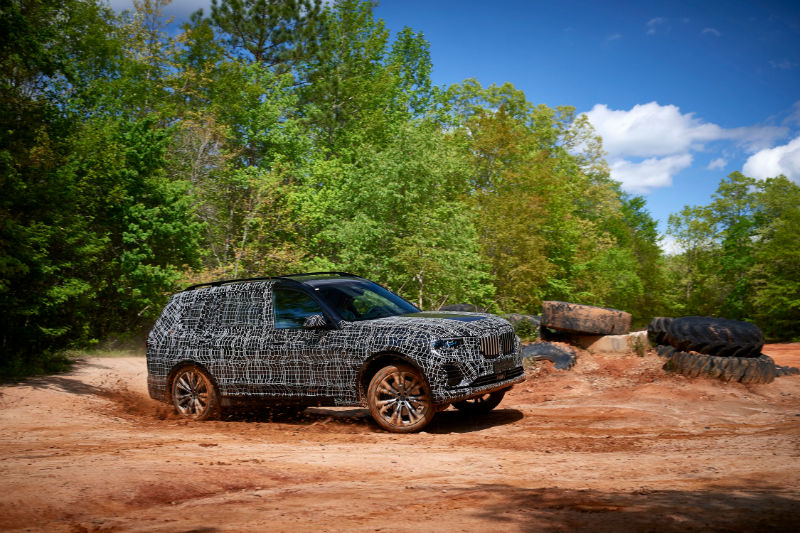 Spartanburg, SC. If you build and sell cars, more specifically SUVs, beware of Mercedes. Actually, you don’t need to be hearing this from me as if you are competing with Mercedes-Benz, you are probably struggling to keep up. That is of course, unless you are BMW. The recent addition of the compact sporty and cool X2 and the soon to arrive X7 will cover all bases, and I do mean all.

The X7 is something of an oddity in the sense that most consumers will think that it’s always existed, Yes, the X5 could, can and will be spec’d with an optional 3rd row but the folks at BMW have never offered an actual GLS competitor. GLS, you’ve been warned.

X7 does not exactly equal the X5

BMW’s new 2019 X7 might share many components with the equally all-new X5 but there’s a fine line that engineers in Germany and Spartanburg would not cross: if a part from the X5 did not quite match their expectations of what the X7 was supposed to be or do, they’d head to the drawing board and design a new component. I don’t have an exact number of unique elements but after driving an X7 test-mule, an 80-85% complete pre-production fully wrapped X7, I can attest to the fact that this large luxury SUV will do everything. 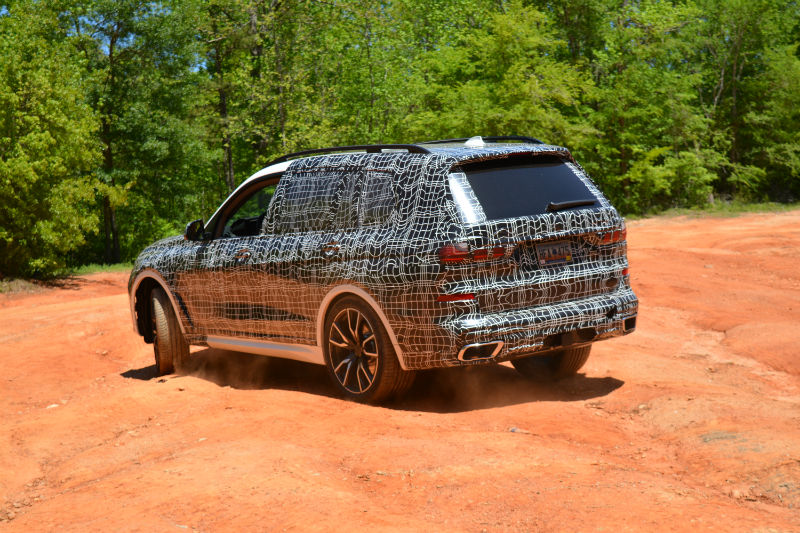 Our drive in the area surrounding Spartanburg, SC, demonstrated without a shadow of a doubt that the X7 deserved to wear the “7”, or BMW’s top luxury number. The 8 Series is a Grand Touring car, not a luxury car, so there.

While I can’t say much about the X7’s final styling, what I could make out from a certain distance, while squinting, is that the truck will be handsome. The BMW Concept X7 iPerfromance was not. The over-sized kidney grille works and the proportions seem just right. I was privy to a sneak peek of the new X5 and unsurprisingly, it’ll knock’em dead. So, by juxtaposing what I saw and what I think I saw, I’ve come to the aforementioned conclusion.

The cabin too was partially covered in the in driven mules. In fact, we were not allowed to take interior pictures under penalty of not getting any desert after dinner. I can share that the X7 will include three rows of seating as standard. The second row can be outfitted with captain seats, so it’ll accommodate seven, or six passengers. Either way, the trucks we drove all had power adjustable 2nd row perches. The front seats were very comfortable and supportive and, at the other end of the X7, the third row remains the exclusive domain of the smaller human being, or dog. The longer X7’s boot is where most of the volume gains are made.

The X7 will match and possibly surpass the 7 Series equipment wise. Twin 12.3-inch screens will be standard, one serving as the instrument panel and the other, for everything else. The 7th generation of BMW’s iDrive (ID7) serves as the tool to work through the countless menus and various settings. Perhaps most importantly here is that over-the-air updates will be possible this time around; BMW has seen to it. That’s it for the information about the X7’s styling and equipment.

This event hovered around driving the X7, but we were also given a huge amount of details on the new 2019 X5, which I can’t share. It is by mixing both experiences that I’ve come up with the following slightly more detailed powertrain information and driving experience. 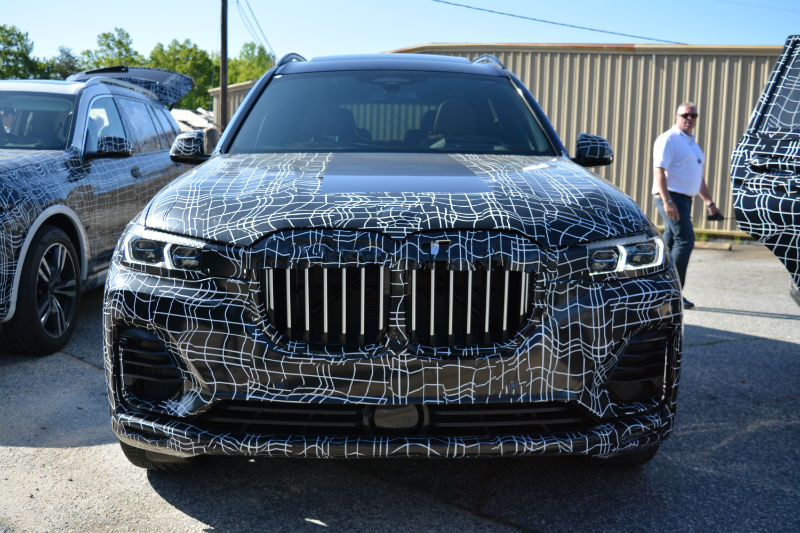 The day began with the V8 version, which will be the X7 xDrive50i. I’m assuming V8 will be the bi-turbo 4.4-litre and that it will produce approximately 445-horsepower. With this engine, the X7 is quick. Throttle mashing is met with a swell of torque and a standard-for-all 8-speed automatic transmission that eagerly drops a few cogs before lift-off. The entry-level M40i will sport the twin-power 3.0-litre inline-6 and should be good for 355-horsepower. While not as powerful, it’s lighter constitution makes a huge difference in the driving dynamics department.

The 50i’s steering was off, or so it seemed to me. I mentioned it to an engineer and I was told that they had an updated steering program on hand, but it wasn’t to be sampled. The M40i also featured BMW’s linear rear Integral Active Steering with Active sway bars. The drop in girth combined with the honed reflexes transformed the X7 from large heavy ‘ute to something far less cumbersome and more agile. Rear steering will be a must-have option.

Air suspension, on the other hand, will be standard. It too plays a monumental role in the X7’s road-going manners. From its “normal” level, the suspension rises or lowers 40mm for a total of 80mm of travel. The various settings lower the truck on the highway or will raise it for some off-roading, which we completed with ease.

From what I gathered, the new 2019 X7 will be an impressive overall offering in the lucrative luxury 3-row SUV segment. One advantage it may have in the future is a diesel engine alternative. Mercedes and Audi have thrown out the idea but BMW’s thinking about one version of their 3.0-liter turbo-diesel engine for our market, at some point. 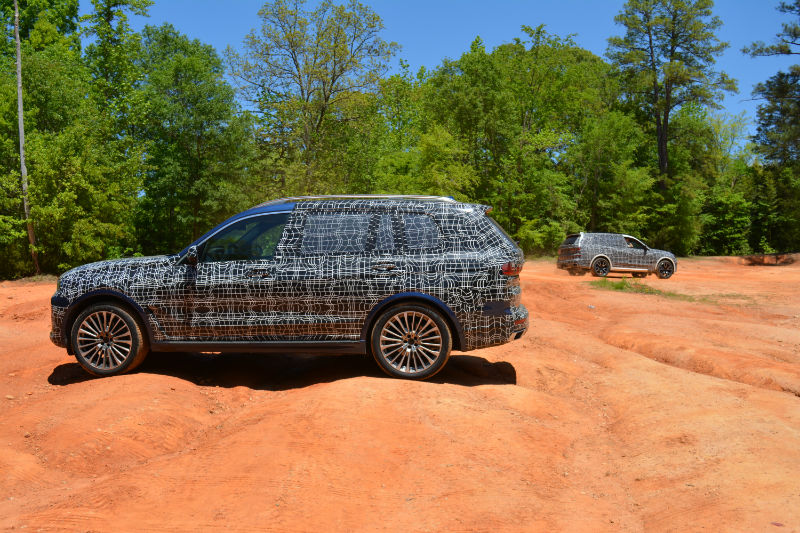 The 2019 BMW X7 is not expected on the road for nearly another year. Pricing info or actual trims are not yet available however I’m going to predict a base price somewhere around $85,000, to match the Mercedes, and equal that of a well-appointed Audi Q7.

These hubs will be similar to a gas station, with a convenience store and a café The central location of many gas stations...
Read more
Previous articleThe Jaguar XK to make a comeback?
Next article2019 Volkswagen Jetta First Review