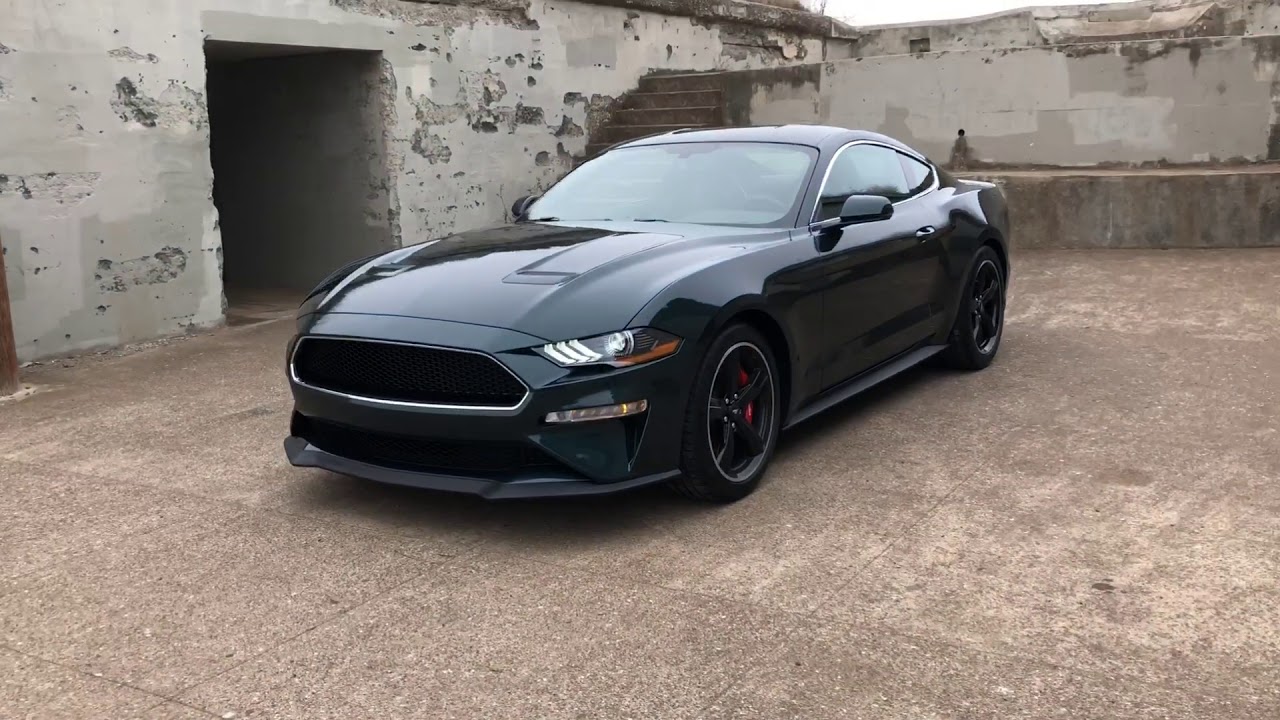 San Francisco, CA. Sometimes, the stars align perfectly. Once in a while, actions are taken and the outcome could not have been better planned. Fifty years ago, Steve McQueen opted to use a (two actually) dark Highland green 1968 390 V8 Ford Mustang GT Fastback with a 4-speed manual transmission for his movie but little did he, Ford, or anyone else for that matter, know what kind of impact his feature length picture was going to have as a hole

Through Bullitt, McQueen infused his aura onto the Mustang which, at the time, was already a knock-out for Ford. We’d have to wait 33 years before Ford was to re-fuse Bullitt into Mustang for the 2001 model year and the magic started all over again. The Mustang Bullitt returned for 2008 and suddenly the car took on a life of its own.

I’ve never driven an ’01 but I have an ’08. I’ve also tested and reviewed a dozen Mustangs over the last two decades. Short of the 2012-13 Boss 302, no other Mustang, not even a GT350, gives me the fizzes quite like the Bullitt. The first element someone needs to understand or hold before being able to truly appreciate this particular Mustang is a love for the movie Bullitt. Being a fan of the actor that portrays LT. Frank Bullitt is a plus.

The latest 6th generation Mustang suffers the exact same fate as all the others before it. When launched, the car fans emotions with seductive styling, the promise of performance but it soon becomes a familiar sight on rental lots and street corners. This is a fine problem for Ford but they never turn a blind eye to their diehard disciples. It is to those that the GT350, GT500 and Bullitt are dedicated. Ford has worked some serious magic in the 2019 edition of the coolest Mustang. 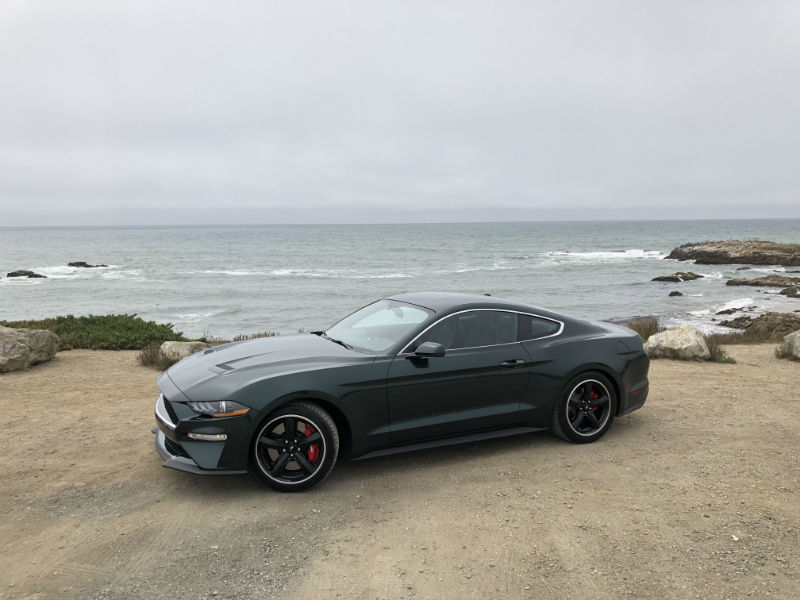 While my favorite POV of the current ‘Stang is from the rear, the Bullitt suffers no “bad side.” Ford’s blended equal parts dark and mysterious with classic touches like chrome accents and tasteful aero bits into the most attractive car Ford builds. Draped in Dark Highland green, with its Torque Thrust design black wheels, the car looks special, different. Honestly, I don’t recall taking more pictures of a single car in such little time – Driving the Bullitt in San Francisco and retracing parts of the movie’s chase route also yielded countless photo ops.

The 2019 Mustang Bullitt is unquestionably a Mustang both outside, and in. Other than a large BULLITT horn button, the 12″ digital instrument cluster and the optional (and must) Recaro seats with green stitching, the cabin is run of the mill. This unfortunately means that it is furnished with Ford’s ridiculously loaded steering wheel with oversized pods for controls and super-fat, good-grip-preventing spokes. A few words to describe Ford’s SYNC 3: it is the best Infotainment system currently available – it’ll even display Waze on the screen!

And now, the drive. We Canadians will have to pony up more cash for a Bullitt. Other than the depressing exchange rate, it is important to note that our cars will be better equipped. No piece of kit is worthier of mention than the adaptive dampers. 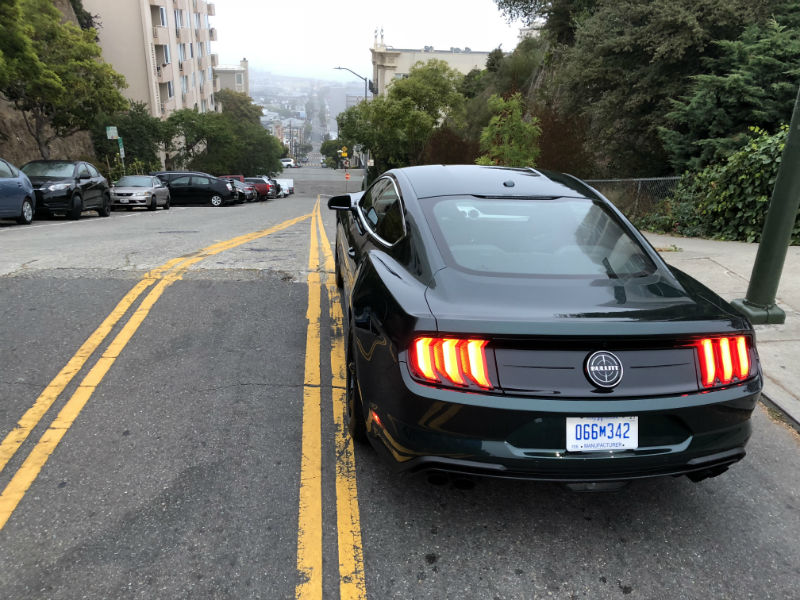 The MagneRide damping system creates driving magic – there’s no other way to put it. This car is the heaviest of the fastbacks but the dampers alleviate the girth over the front wheels, giving the Bullitt agility and responsiveness I did not expect. Through a long series of switchbacks just south of La Honda, the Mustang and I quickly got comfortable with each other. The masterful work of controlling weight transfers permitted the front wheels to direct the car exactly where I had it pointed. I preferred their labour when set in Normal on these roads as they provided more wheel travel given the changing surfaces. Right there with me was the TORSEN limited-slip differential putting the gobs of power to the tarmac.

Through San Francisco, once more in Normal, the Bullitt glided over the rougher stuff. Bottom line is that “Normal” is the ideal mode for 99% of all driving situations. If you prefer sharper steering, it can be adjusted independently, as can the exhaust note which is the only element that must be set to Track at all times.

The Bullitt’s 5.0-litre V8 has been massaged slightly for some extra bragging ponies over the regular GT. Thanks to an open air box, Shelby GT350 intake manifold, and larger 87-millimeter throttle body, output is rated at 480-horsepower at 7,000 rpm. Torque is unchanged at 420 lb.-ft. The unique powertrain control module calibrations must be responsible for the V8’s uncanny responsiveness, and equally smooth power delivery.

At $57,525, the 2019 Ford Mustang Bullitt is cheaper than a crack addiction. Getting on the throttle swiftly will deliver constant and sustained highs, and smiles. The Bullitt is quick and the 6-speed manual transmission is geared in such a way as to reach 100 km/h in 2nd in no more than 4 seconds. Thankfully, the 5.0-litre loves to rev and deliver. Speaking of revving, the gearbox has a Rev Matching function that can be switched off.

I’ll admit to pushing myself deep into some of the tighter hairpin turns and at one point, on a downhill section of the road. I wasn’t worried however as the red-painted Brembo brakes (six-piston front, single piston rear calipers) with larger vented rotors effortlessly reeled in the excess momentum.

As I said, I was at ease with the Mustang Bullitt almost immediately, in very few words, we were cool. Quite frankly, not many cars have rattled my cage in so little time as has the Bullitt.

While Bullitts will be built to demand, Ford will not keep the tap open indefinitely. Orders yours now over a GT. It’s worth it.

Mercedes-Benz has not confirmed the updates yet. A new heat pump should help to boost autonomy between charges. A 4x2 mode should also...
Read more
Previous article2019 Ford Mustang Bullitt
Next article2019 Acura RDX Platinum Elite