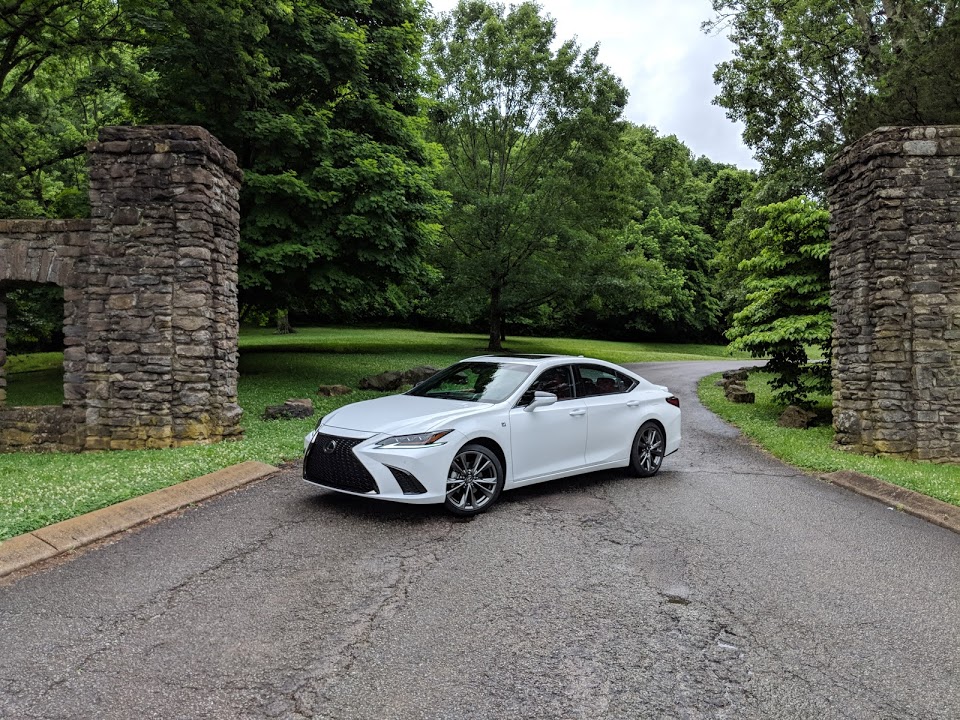 If there’s ever been one car that represented everything young, active buyers didn’t want, it was the Lexus ES. There was nothing wrong with it and it was actually quite comfortable, luxurious and refined, but try and picture it in your mind and chances are you drew a blank.

It was perfectly suited to a host of driver and passenger needs, but it was unable to generate the slightest little bit of passion and excitement. Notice that we are talking in the past here because the 2019 Lexus ES we had the chance to sample in Nashville, Tennessee a few weeks back is nothing like the model it replaces.

Lexus has gone in a completely different direction here with its mid-size sedan. Although I’m not sure the strategy will work, I can’t help but be impressed by the fact that I had fun driving the ES, something I never would have thought pas possible.

As mentioned, the Lexus ES didn’t have any glaring faults, but boy was it easy to criticize when it came to driving enjoyment, performance, and handling. Not particularly fast, it never liked tight corners either. It did a lot better on the highway where it isolated you from the outside and any kind of bump in the road. 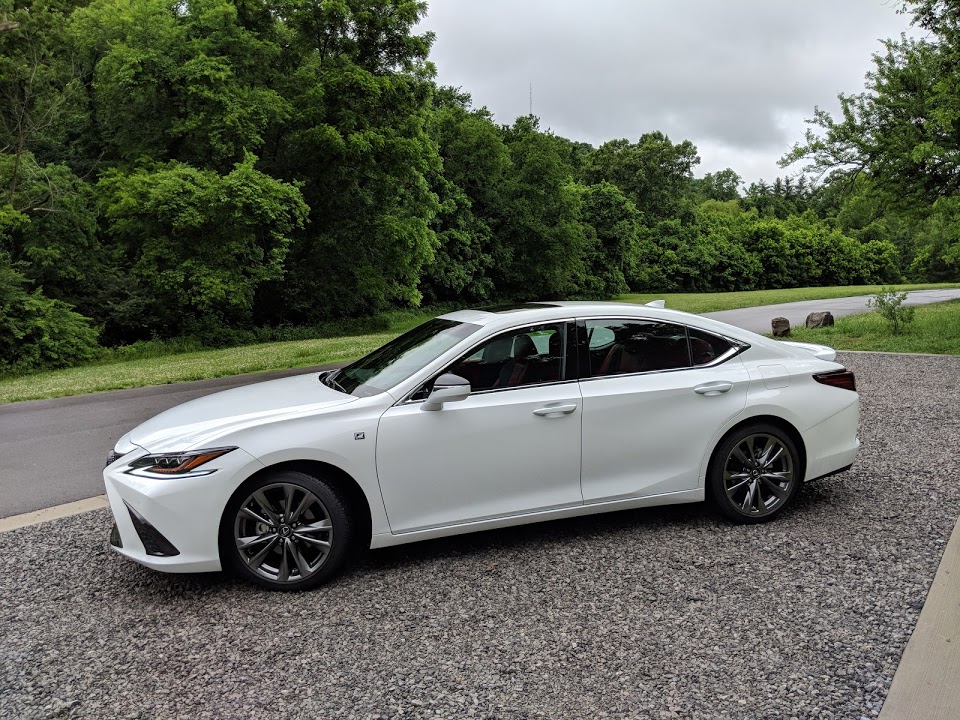 You would choose an ES to drive from Toronto to Miami, or to commute from your suburban home to your downtown office as you make your 49 morning phone calls.  You can still do all of that in the new ES, but now you can also enjoy a winding road.

Lexus isn’t shy to admit that changing the image of the ES was at the heart of this 7th generation’s mission. No longer will the Lexus ES aim only at the Buicks, Cadenzas and Maximas of the world. IT now wants to impress BMW, Audi and Mercedes-Benz owners as well.

To do this Lexus built the 2019 ES on the new Global Architecture-K chassis which is much more rigid than the outgoing mode’s underpinnings. The ES is actually not too far of the Lexus LC in terms of torsional stiffness. Weight has been reduced, a V-brace was installed behind the rear seats for even more rigidity, the suspension has been redesigned and now features a double wishbone setup, and Lexus engineers tuned the steering setup for more precision and a better feel.

A new F Sport model was also added to the ES family for the first time. It features a host of esthetic modifications meant to tell others this is the sportiest model in the lineup along with an adaptive suspension system. Even the engine sound is tuned in the Lexus ES 2019. An aggressive sound coming from a Lexus ES? Now we’ve seen everything.

Under the hood we find an improved 3.5-liter V6 engine developing 302 horsepower, 34 more than the outgoing model. There’s a total of 267 pound-feet of torque under your right foot as well. The hybrid version is back with 215 horsepower and an anticipated fuel economy rating of 5.3 liters per 100 kilometers.

If you’re ever in the Nashville, Tennessee area and looking for a beautiful road where any enthusiast will truly enjoy themselves behind the wheel of their car, check out the Natchez Trace Parkway. It will take you past Jackson Mississippi if you want to, but even a few miles outside of Nashville on this thing will get your adrenaline going with the right car. 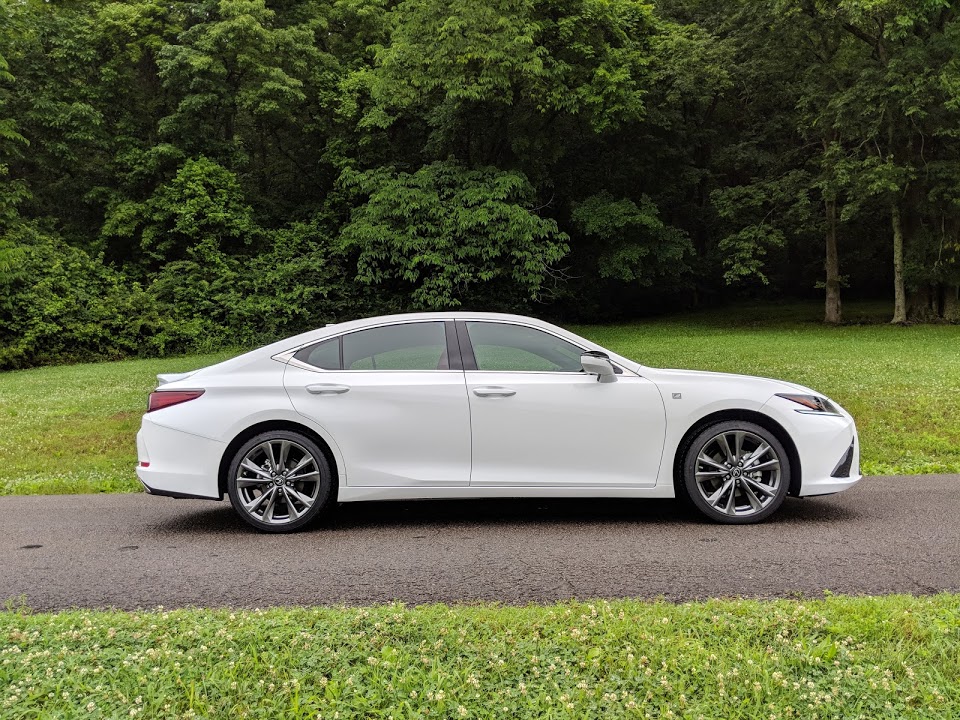 The Lexus ES of yore would have hated the Natchez experience. The new one ate it up. Dial in Sport or Sport+ modes, and you have a twitchy vehicle in all the right ways. Steering is just tight enough and the power coming from the engine flows through without hesitation. What an incredibly different and satisfying experience.

It’s not quite BMW-like, but it’s not far from it. Moreover, the 2019 Lexus ES retains a certain level of comfort and refinement which you won’t find in a BMW 3 Series. It’s also a lot nicer inside than an Audi A4 or Mercedes-Benz C-Class in my opinion.

The interior is lacking Android Auto which I really can’t understand, but the quality of the materials and the overall design is quite simply stunning. We were driving pre-production models so there were a few issues with fit and finish, but that shouldn’t be the case on production models that will arrive in September.

Thanks to the new platform there’s more space inside the 2019 ES. The trunk is also quite accommodating, and you don’t lose any space if you opt for the hybrid.

On the flight back from Nashville, I couldn’t help but wonder if the ES represented the new image and direction of Lexus. Known for the reliability of its models and their impressive sophistication, Lexus was ignored by those who like to drive for a very long time. Now we have the LC and IS which put the focus squarely on performance, and even the lineup’s other models like the LS and RX have tuned to be a bit sharper. 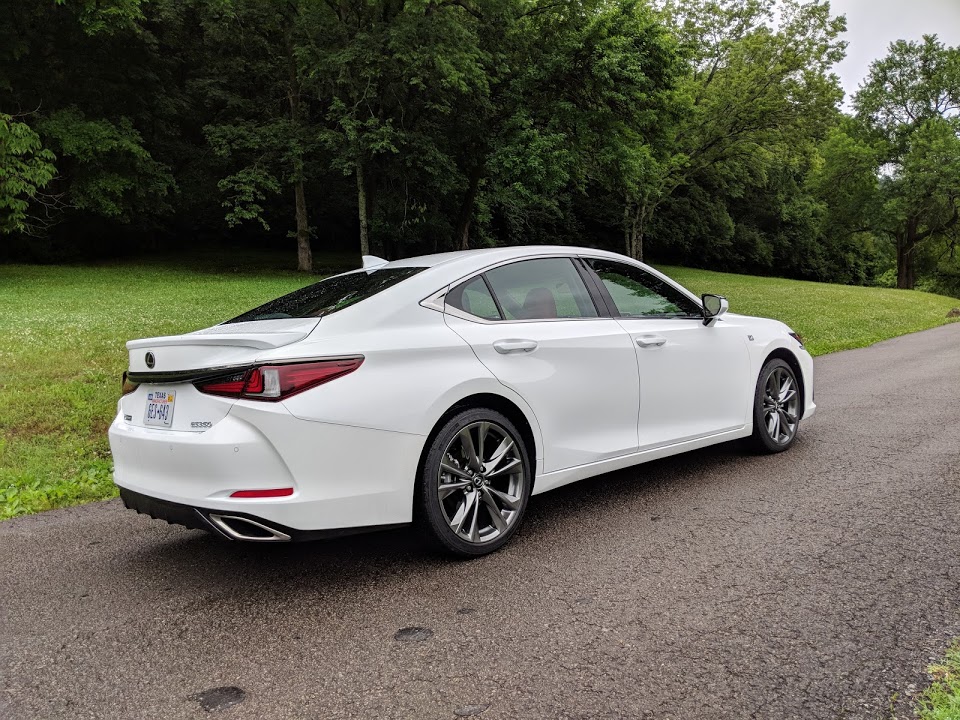 The last model you ever expected to get this new, sportier vibe was the ES and yet, here is this 7th generation. The only issue I have with the car, and it’s a big one, is that Lexus still doesn’t offer all-wheel-drive with it. The automaker will tell you that that’s because people aren’t asking for it, but I believe this is a chicken and egg thing.

Build it, and people will come. Until then, it will be hard to convince buyers who have experienced XDrive, Quattro and 4Matic to switch to a FWD setup in the ES. If they don’t mind, however, they will have a pretty impressive vehicle that is world’s away from the last generation while still being among the most comfortable and luxurious mid-size sedans you can buy for less than $50,000.

The Genesis GV60 is the first electric model from the brand It shares its mechanicals and its 800-volt architecture with the Hyundai Ioniq...
Read more

Chinese Clones: It is Now the Turn of the Classic Mini to be Copied

You know the expression: "imitation is the sincerest form of flattery". Well, everything indicates that it is the Mini brand's turn to receive its...
Read more

The Lexus RX is a best-seller in its segment. This will mark the 5th generation of the popular midsize premium SUV. The Lexus RX...
Read more

New cars are loaded with passive and active safety systems, but the driver is still in charge. Roughly 160,000 car accidents occur every...
Read more

2022 Nissan Altima Review: Fighting Off SUVs as Best as it Can