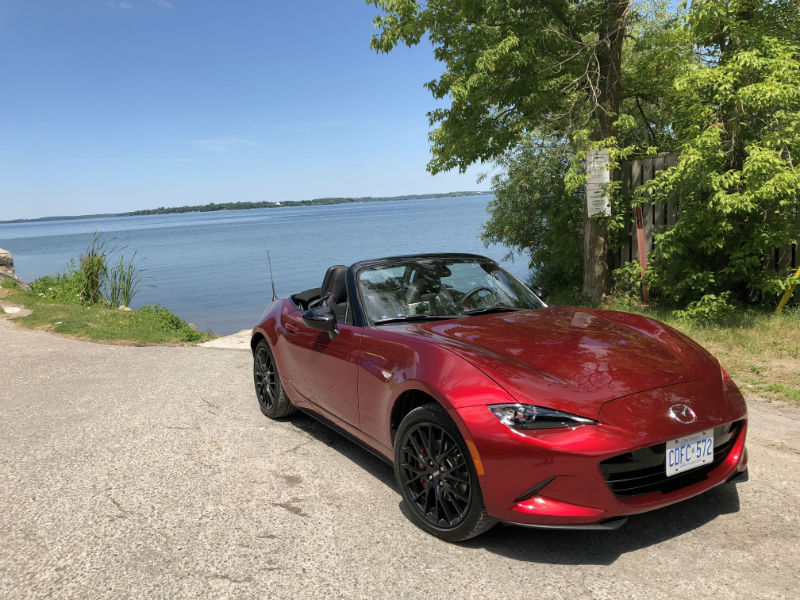 Toronto, ON. Once upon a time, there was a car that made everybody happy. Not only did it provide the most smiles per mile, but it was reliable and economical. So popular in fact was this car that it quickly became the best seller of its kind. Nearly 30 years after its introduction, the love for this car continues to grow as does the number of happy owners.

That car is the Mazda MX-5, aka Miata. Ask any true car enthusiast or any member of the Canadian automotive media and they’ll tell you that the Miata remains to this day one of the best driver’s cars one can buy, be it used or new. In fact, many auto journalists own or have owned an MX-5. I’m currently seeking help as I’ve yet to buy one despite wanting to do so for 20 years. Actually, I’m going shopping online. I’ll be back in a jiff…

While the vast majority of owners relished the joy provided by their MX-5, a few thought it could use a little bit more. The builder complied and answered their request with what is likely the most sought after MX-5, the NB Mazdaspeed. Its turbocharged 1.8-litre engine provided not only 178-horsepower and 166 lb.-ft. of torque but a glimpse of what the car’s excellent chassis was capable of. The NC arrived with 170-horsepower and all was fine. When the ND MX-5 landed, it lost 15-horsepower and some weight. 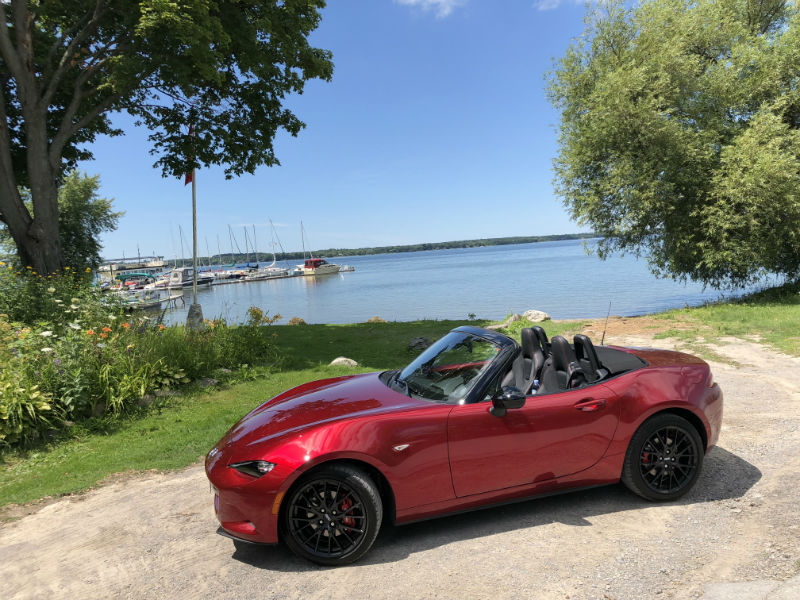 What it gained were a few detractors, at least until they gave the 2.0-litre equipped MX-5 a go. For 2019 however, Mazda’s boosted the engine’s output but not to appease those wanting more power. The official motivation behind the upgrades is: “Innovate in order to preserve.” In order to do so, Mazda engineers revised the 2.0-litre with technology and characteristics found in the 1.5-litre launched with the ND elsewhere in the world.

The new 2,0-litre shares only the engine block with the engine found in the 2018 MX-5. The cylinder heads and valvetrain are all new. The engine now features new lightweight pistons, larger intake valves and intake port, high-lift exhaust camshaft and manifold. Much more was done to the mill but it’s the results that do most of the talking. 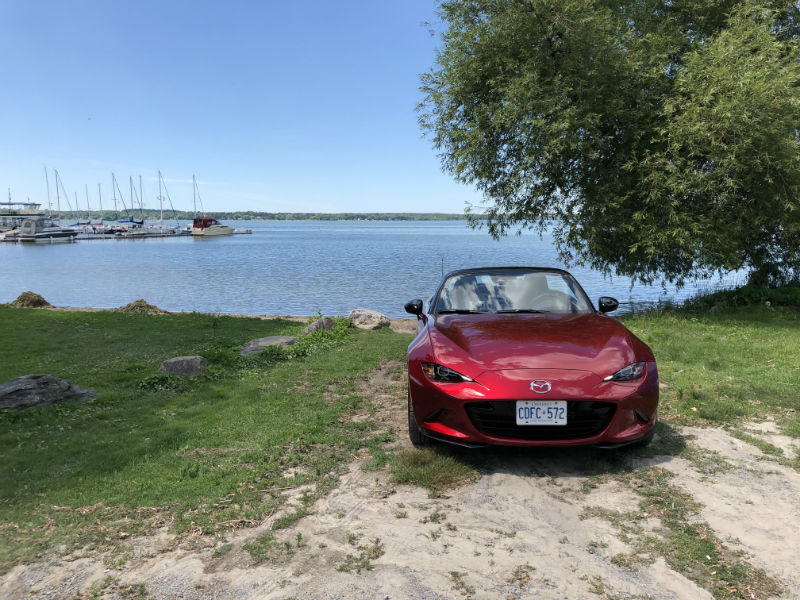 Output is now rated at 181-horsepower and 151 lb.-ft. of torque, gains of 26 and 3 respectively, but these are only numbers. How the power is delivered makes a world of a difference. The powerband is now far larger where more torque is now on tap earlier in the rev range, and for a longer period of time. From 2,000 to about 6,500 rpm, torque production does not drop below 90% providing more passing power in all gears.

Realistically, the 2019 Mazda MX-5 is not much faster than the 2018, but it certainly feels like it. Also new for 2019 is the use of a low inertia dual-mass flywheel. It preserves the engine’s ability to climb quickly in revs and greatly limits vibrations and noises throughout the range. This combined with the revised deeper and more linear engine sound has increased the perceived level of refinement for the better.

Immediately after releasing the delightful clutch, the Miata rewards. The 2019 MX-5 pulls hard and competently all the way to the new 7,500 redline (from 6,800). Although it is now possible to remain in a higher gear and get superior acceleration, I admit to being far too addicted to clutching, shifting and heel and toe-ing. With these improvements, it’s now become even easier to drive the MX-5.

Among the less-than-a-handful of complaints pertaining to the Mazda MX-5 was the lack of a telescoping feature for the steering column. Guess what? Yup, now finding a perfect driving position has become all the simpler. 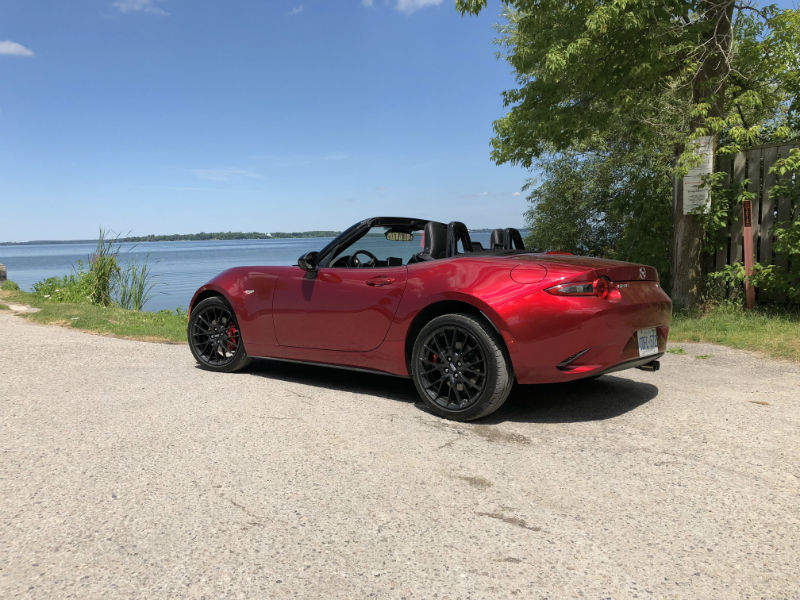 I made a point on drive day to run for the Sport Package-equipped cars as the included Recaro seats are spectacular. It may all sound very cliché but once settled in, the Miata really does become an extension of your arms and legs.

Every kilometer travelled is a thousand meters of wellbeing. The enhanced performance has a great impact on the mind, as does the fact that fuel consumption has been reduced in the process. I don’t have exact numbers now but consider that the ’18 averaged about 8L/100 km/h. Anything lower than this amount, with more power, is a big fat winning.

For the 2019 model year, Mazda’s revised its grade structure. The base GX is no longer offered so the GS is the entry level car with the soft-top. Standard kit includes the new engine, a battery of safety features including rear cross traffic alert, and more.

The GS-P, the base car for the RF, bridges the gap between the GS and GT. It throws in sporting and luxury features such as Bilstein dampers, a limited slip differential, heated seats, Bose audio and navigation. Here, the Sport Package can be added and continues to involve the BBS wheels, Recaro seats and Brembo brakes. With the RF, the group is called Grand Sport and is limited to the wheel and brakes.

The GT carries on as the range topper. For 2019, options like Brown or Dark Cherry soft-tops, Tan or Chroma Brown leather seats can be selected in either car.

Pricing has yet to be announced however I will venture a guess that the 2019 GS Soft-Top will start somewhere around $35,000. The RF should continue to hover around $40k. The 2019 Mazda MX-5 will go on sale this September.