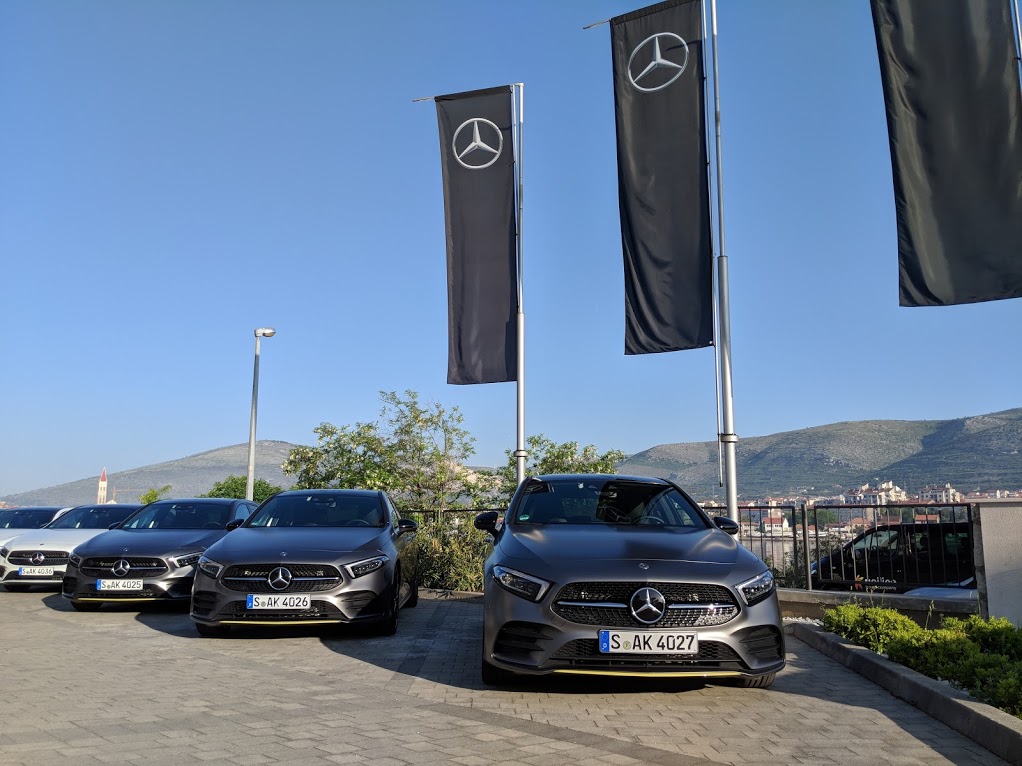 Split, CROATIA. There’s something about driving a vehicle with a prestigious emblem that makes people feel better about themselves. If you have 40k to spend on your next vehicle, you can get a loaded mid-size sedan or SUV from a mainstream automaker like Honda or Toyota, or you can opt for a sparsely-equipped entry-level model from a luxury German automaker. It would appear logical to opt for the car with more equipment, but we all know that’s not the way it goes.

Unveiled at the Geneva Auto Show last March, the 2019 A-Class is a new generation for Europe and an all-new model for North America. It will arrive in November over here and replace de B-Class as Mercedes-Benz’ entry-level offering. Pricing hasn’t been confirmed, but expect it to be less than the current CLA which starts at about $35,000. 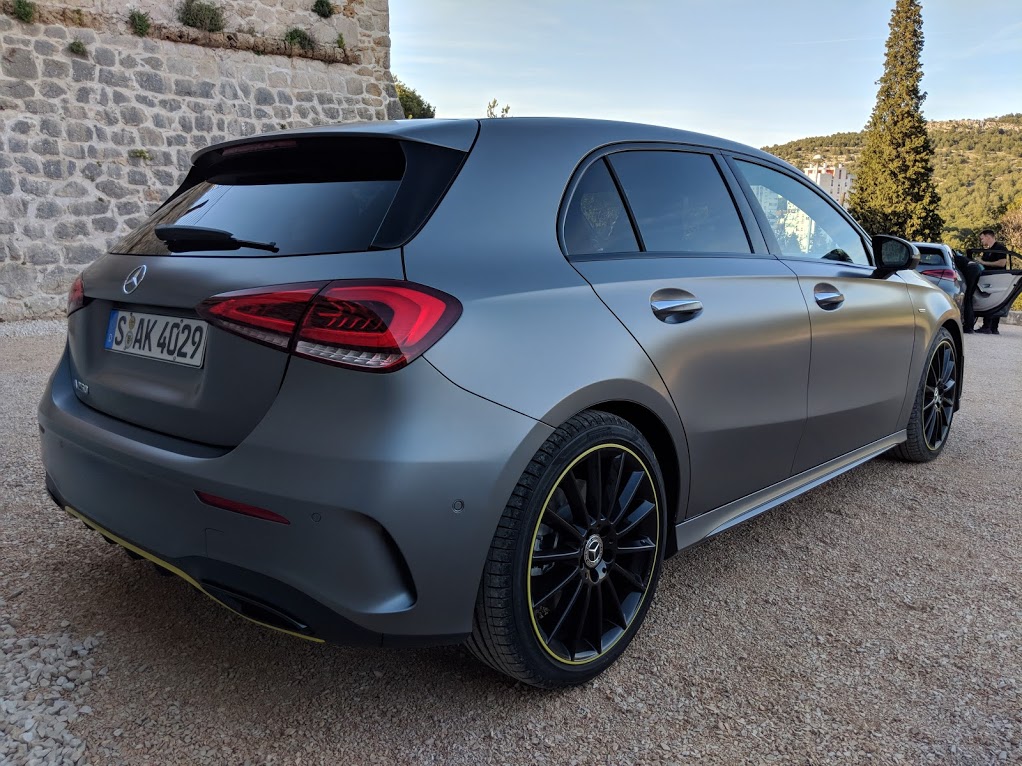 With the CLA, Mercedes-Benz managed to attract a significant number of new buyers to the brand, but many were quick to point out the car’s subpar materials and craftsmanship inside. I personally felt it wasn’t that bad, and I also believed that buyers who would get a CLA probably never set foot inside a Benz in the past. They therefore would never have anything to really compare it too and ultimately, they will be satisfied.

Nothing Entry-Level About the 2019 Mercedes-Benz A-Class

Anyway, the point is Mercedes-Benz knows how to build an entry-level vehicle that makes you feel richer than you actually are, and the 2019 A-Class is a prime example. Unlike the CLA, you can’t possibly criticize the quality of the materials found inside, and the level of refinement and technology found in the cabin is actually quite impressive. There’s even a new and exclusive MBUX infotainment system which makes a first appearance on the A-Class. More on that later.

There is only one model confirmed for Canada at the moment, the A 250. On the road, it’s 2.0-liter, four-cylinder turbocharged engine gives you 221 horsepower and 258 pound-feet of torque. That’s 13 more horsepower than the CLA, which isn’t a huge amount, but you still feel the extra peppiness on the road. What you especially notice about the 2019 Mercedes-Benz A-Class, however, is just how stable and planted it feels on the road. 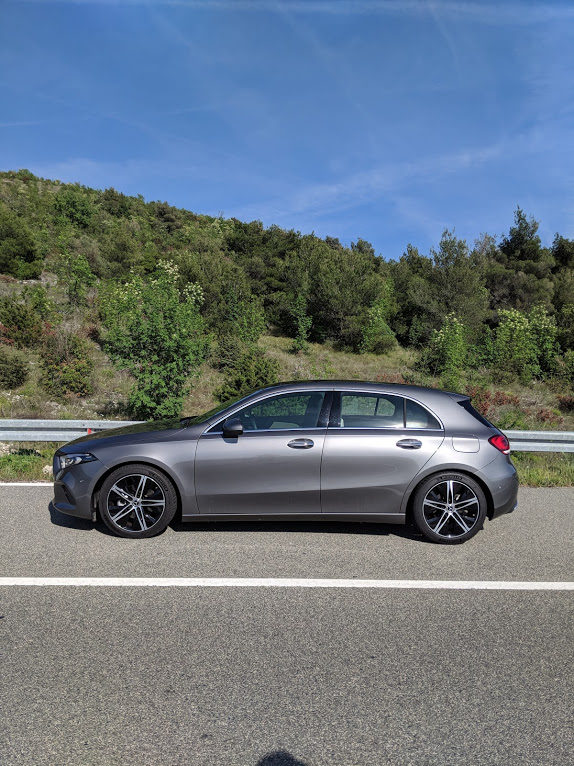 The car just feels connected both to the road and the driver. The sporty steering wheel is a joy to hold and use, and the A-Class seems to react immediately to any driver inputs. The CLA was and is a bit skittish sometimes. Not so with the A-Class.

Front-wheel drive will be standard while 4Matic all-wheel drive is optional. A nervous seven-speed dual-clutch gearbox is standard and works like a charm, regardless of whether you are driving for comfort or for performance. As with most Mercedes-Benz models, you can change how the A 250 behaves thanks to various driving modes. Comfort is quite comfortable for a small hatchback while the two Sport modes transform the A-Class into a proper corner carver.

Again, I was really impressed at how balanced it is, and I’m already getting giddy at the thought of a Mercedes-AMG A 45 with a near-400 horsepower turbocharged four-cylinder. Nothing is confirmed to that end, obviously, but that would be a dream come true given how well the A 250 performs. More power would be fine, let’s just put it that way.

Inside, the seats are comfortable, the cabin is quiet and the dashboard has the upscale design of the new E and S lineups. The materials don’t have the same quality, but you’re certainly doing better in an A-Class than in a BMW 2 Series or an Audi A3. The luxury level has been kicked up a notch.

Interior space is great upfront, ok in the back, and lacking in the trunk with just 370 liters behind the rear seats. That said, the only true A-Class competitor with a hatchback is the VW GTI, and when you put it that way the relatively small trunk isn’t so bad. You’re still in a better position to haul cargo around in the A-Class than in the BMW 2 Series or Audi A3.

The new 2019 Mercedes-Benz A-Class will be the first Mercedes-Benz vehicle in Canada to feature Mercedes-Benz User Experience, or MBUX. This advanced infotainment system has a very advanced voice command interface as well as artificial intelligence components designed to adapt to the driver’s daily needs. 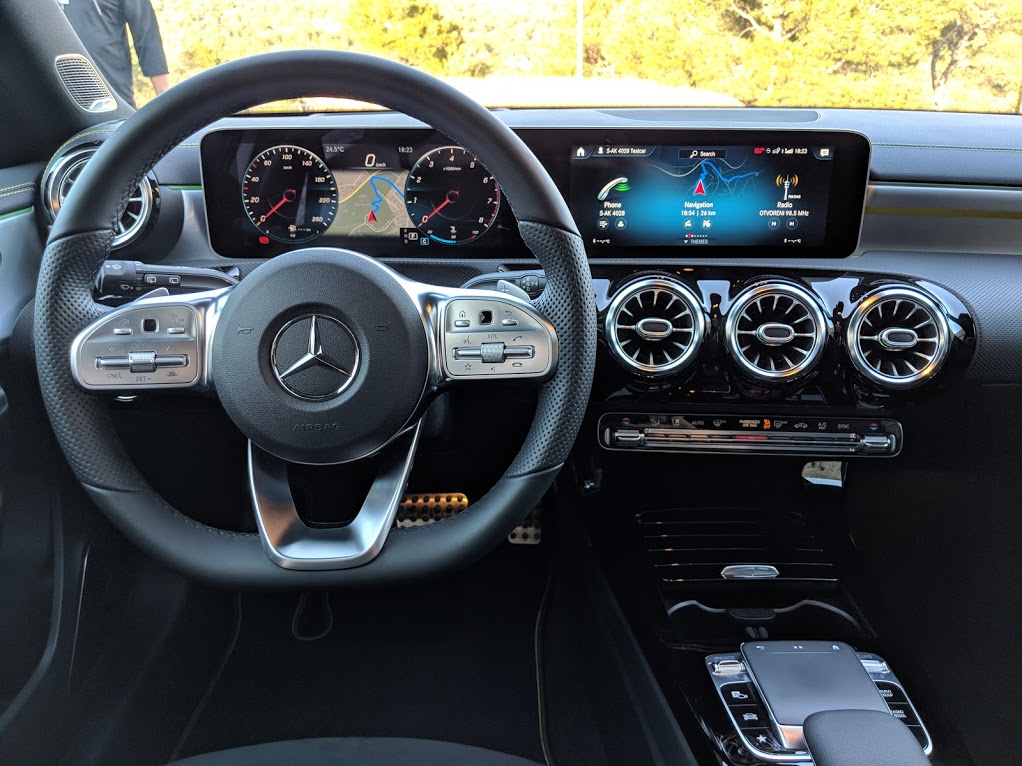 Working like Apple’s SIRI or Google Home, MBUX activates when the driver says “Hey Mercedes”. You can then talk freely with your car, asking it to turn on the heated seats or simply complaining that it is a little warn in the hopes that it will lower the inside temperature. Mercedes-Benz wants you to be able to speak with the A-Class casually without having to repeat every command.

You will notice that the system doesn’t require to speak like a robot to be understood. Most of the time, it works seamlessly. Get a little fancy, however, and it will ask you to repeat.

In a nutshell, I feel that MBUX is definitely among the most advanced infotainment systems on the market and it’s great that Mercedes-Benz is offering it in an entry-level vehicle as standard equipment. That said, I think I would still adjust whatever I need to adjust myself. I don’t think we are at the level yet where it’s faster to use the voice commands.

In the end, the 2019 Mercedes-Benz A-Class will do very well on the Canadian market. It is a lot more luxurious than the CLA, outgoing B-Class, A3 or 2 Series. It more stylish and packed with more technology, and its interior is more luxurious. My only concern is how much car you’ll get for $35,000. If Mercedes-Benz can keep the optional packages in check and provide good value across the entire A-Class lineup, this car will be an absolute hit.