The 2019 Mazda3 rocked the Los Angeles Auto Show this week, and quickly became one of the show’s most talked-about models. That’s saying something given the LA Auto Show was also the sight of the new Porsche 911 and Jeep Gladiator unveils.

As GM abandons its Cruze model and almost every automaker is focused on SUVs, it’s refreshing to see Mazda come out with a brand new 3, and also to see that a lot of effort has been put into this redesign.

A lot. The model unveiled in Los Angeles is the fourth-generation Mazda3 and includes a brand-new engine along with a pretty noteworthy optional feature.

For starters, the 2019 Mazda3 will be offered with i-Activ all-wheel drive making it only the second compact model to have AWD (the third if you include the Golf Sportwagen). The Subaru Impreza offers it as standard equipment while the Mazda3 will make it available as an option. Still, for buyers living in northern states and Canada, this is some very good news.

Next, the new 3 will offer Mazda’s SKYACTIV-X engine which we’ve been talking about for almost a year now. The SKYACTIV-X uses a complex ignition process called Spark Controlled Compression Ignition, or SCCI. A very lean air-fuel mixture is added to the cylinder and very heavily compressed. It is then ignited using a concentrated injection of fuel around the spark which flows to the rest of the compressed mixture in the cylinder.

The end result is improved torque and lower fuel consumption, like in a diesel engine. Output is expected to be 180 horsepower and 164 pound-feet of torque. Fuel economy numbers aren’t confirmed, but Mazda says they should be around 20 percent lower than the current SKYACTIV-G engines despite power being nearly identical to the 2.5-liter four-cylinder currently offered.

The 2019 Mazda3 will also offer the 2.0-liter and 2.5-liter engines available in the current-generation model. 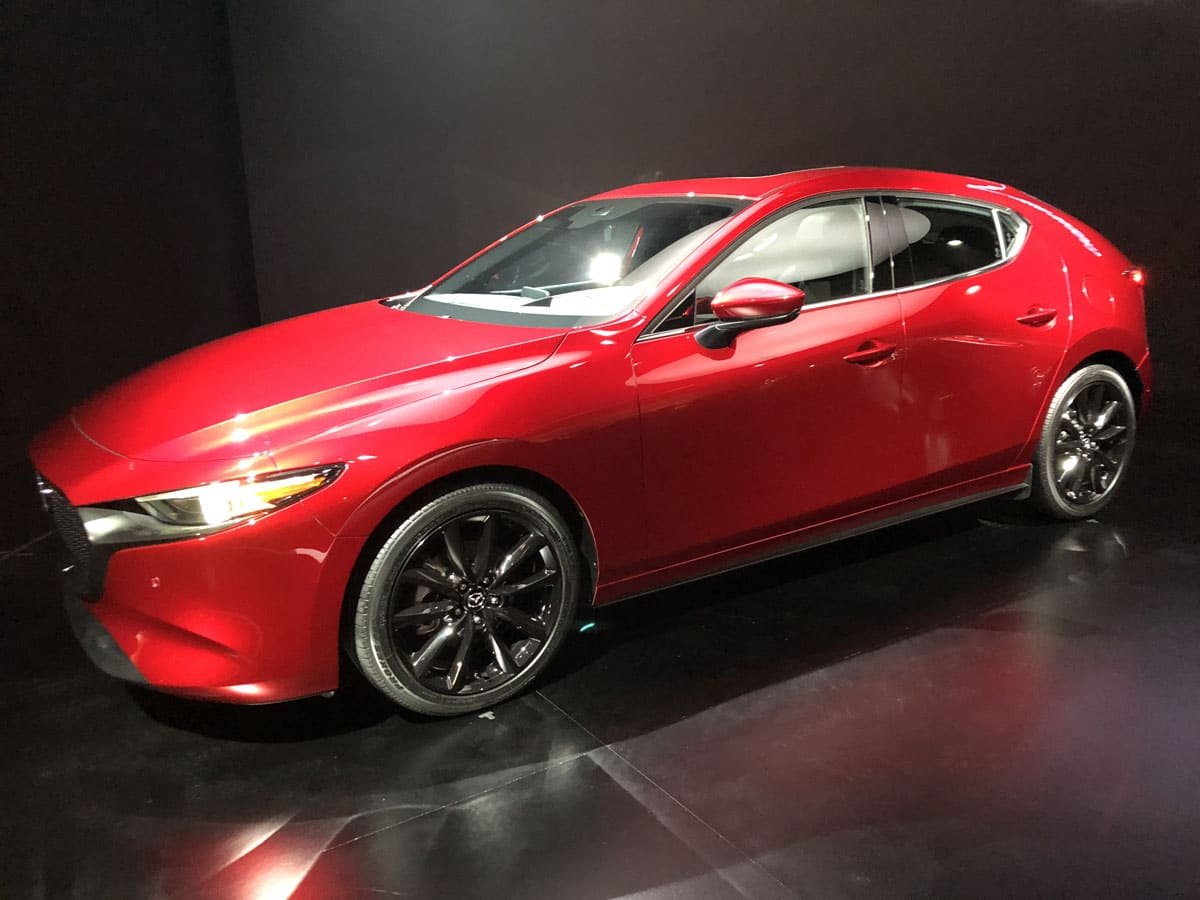 Pricing isn’t confirmed yet, but we can’t imagine Mazda will up the current $15,900 Canadian starting price too much. We’re thinking maybe $16,500 for the base model and around $ 26,000 for a top-of-the-line Mazda3 with SKYACTIV-X. All-wheel drive will be offered on this model, probably as a $2,000 option.

All that is just speculation, but it makes sense to us.

When will it arrive on the market?

The 2019 Mazda will be released in early 2019 with the exception of SKYACTIV-X models which will arrive later in the year.

Which other cars should you check out?

Now that the Mazda3 offers all-wheel drive, buyers who were looking into the Subaru Impreza may want to wait. The Honda Civic, Toyota Corolla and Hyundai Elantra are direct competitors.

Then there’s the Ford Focus and Chevrolet Cruze, but those models are in limbo. The Nissan Sentra is in need of an update, but it’s in the same price range.

We were all impressed by the 2019 Mazda3 and believe us, it looks better in person. It will likely be as fun to drive as the current generation and the addition of all-wheel drive has us excited about the possibility of a 186-horsepower GT model with a six-speed gearbox sending power to all four wheels. We still have to see about that, but what’s certain is Mazda improved its compact sedan without diluting what has made it successful. At least on paper, we still have to drive it to be sure.

The SUV version joins the electric pickup in the GMC lineup. The first deliveries are expected to take place before the end of...
Read more
Previous article2019 Honda Civic vs 2019 Kia Forte Quick Comparison
Next article5 Things To Know About the 2020 Jeep Gladiator Pickup Truck