Up to 677 horsepower with the available boost function.

Mercedes-Benz is hard at work cranking out its lineup of fully electric cars, and following the launch of the midsize EQE last fall, the German brand is turning the performance dial up with the debut of the Mercedes-AMG EQE.

Based on the same EVA2 platform as the Mercedes-Benz EQS, or what the company calls its “premium-class electric architecture,” the 2023 Mercedes-AMG EQE 4MATIC+ is the second new-generation AMG EV in the North American market. 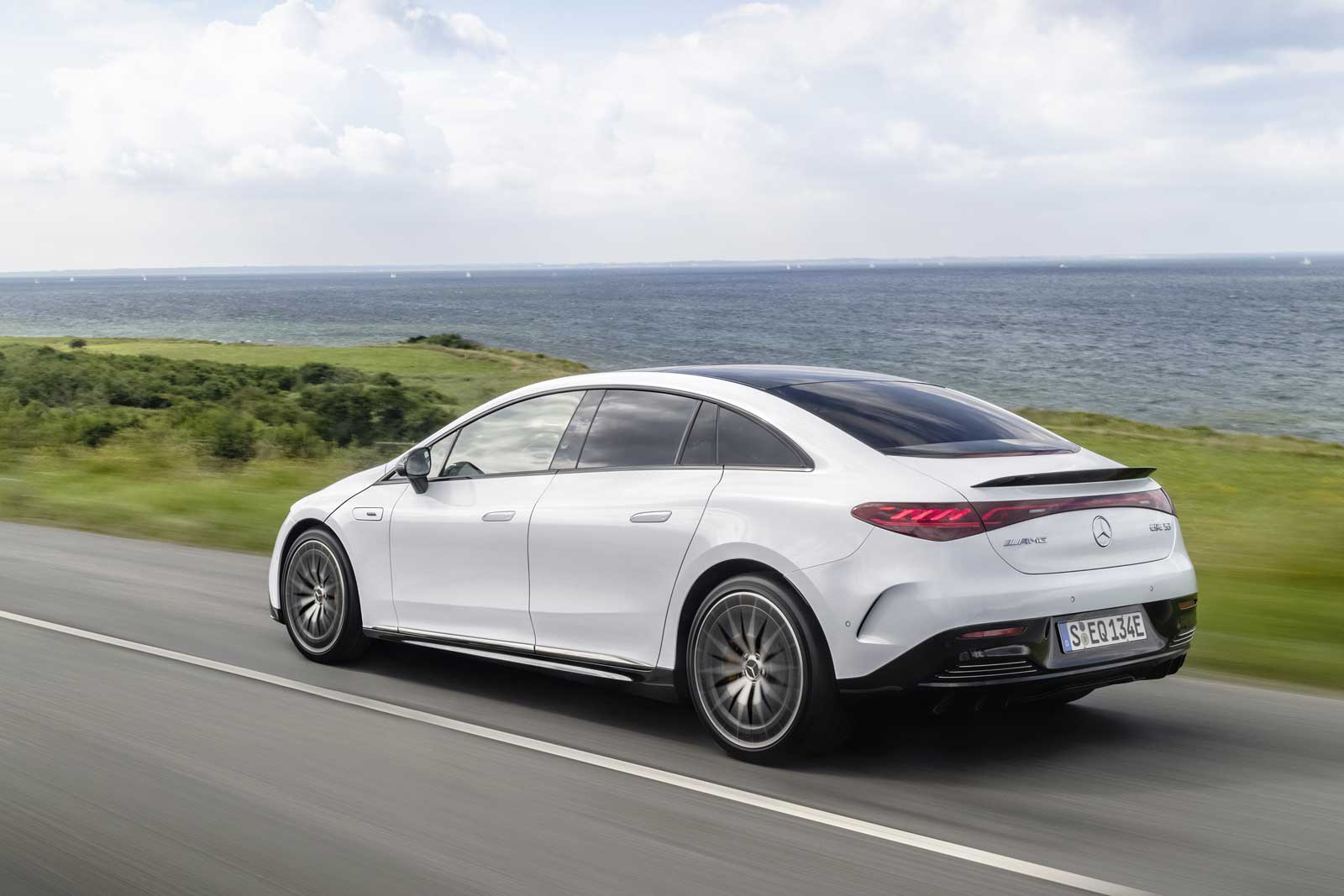 The midsize sedan is equipped with an electric motor on each axle, creating an all-wheel drivetrain. It boasts a combined output of 617 horsepower and 701 pound-feet of torque, good for estimated 0-60 mph (0-96 km/h) dashes of 3.4 seconds and a top speed of 137 mph or 220 km/h. The Mercedes-AMG EQE 4MATIC+ features five drive modes that actually vary maximum output: Slippery gets 50% of available power (308 hp), Comfort gets 80% (493 hp), Sport gets 90% (555 hp) while Sport+ and RACE START get the full stable of ponies.

That’s not all. With the optional AMG DYNAMIC PLUS Package, the sedan gets a boost function in RACE START mode, raising output to 677 horsepower 738 pound-feet of torque for an estimated 0-60 mph time of 3.2 seconds and a terminal velocity of 149 mph or 240 km/h. 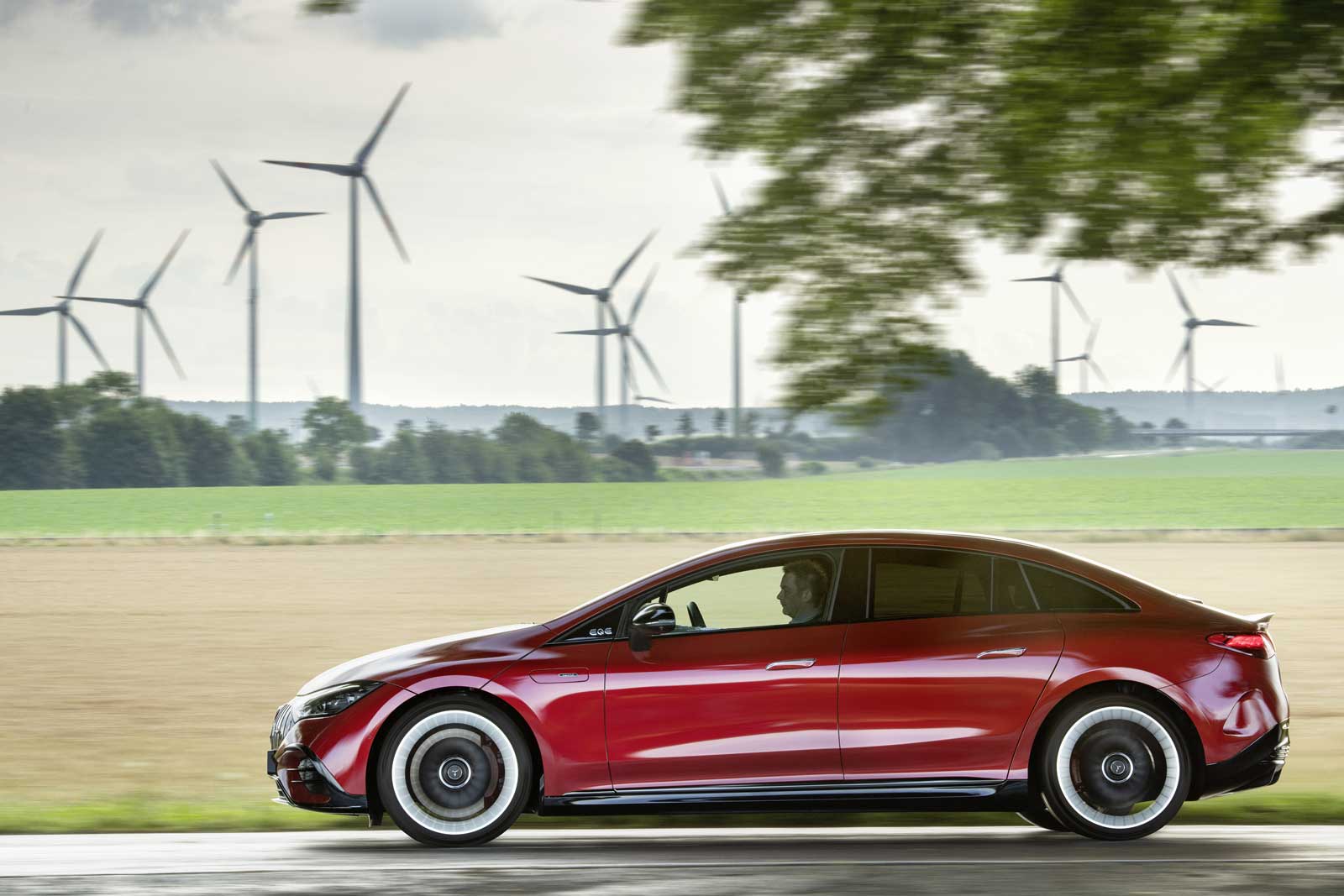 In other markets, there are actually two variants. The EQE 43 4MATIC gets 469 hp and 633 pound-feet while the EQE 53 4MATIC+ is the one we’re getting in Canada and in the United States—the difference being that it’s simply called the Mercedes-AMG EQE 4MATIC+.

The AMG EQE’s 90.6 kWh battery pack provides enough electrons for a WLTP-estimated driving range of 444 to 518 kilometres (276 to 322 miles). However, the EPA and NRCan test procedures are stricter, meaning the EQE 4MATIC+’s range in North America should be lower. 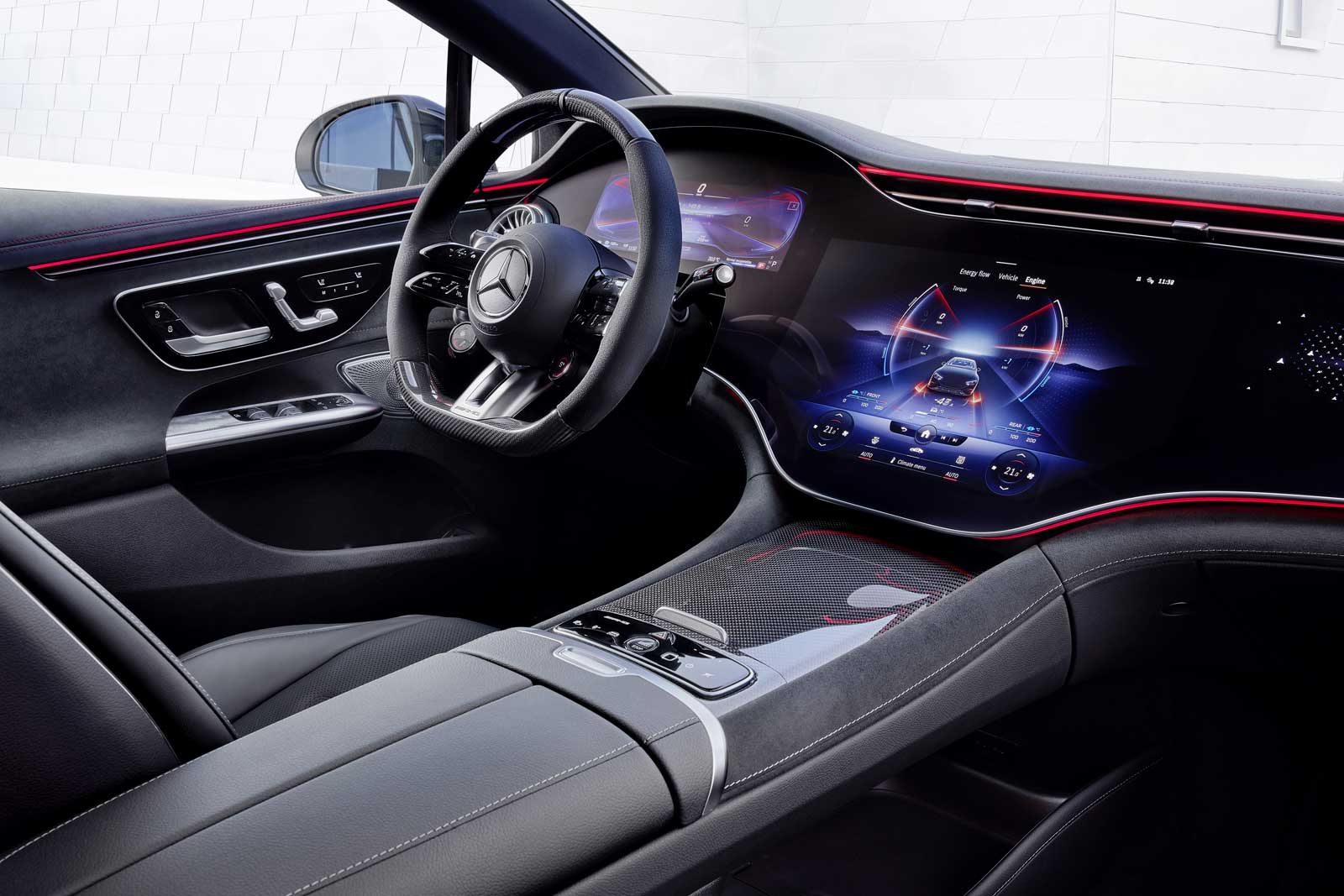 Compared to the run-of-the-mill EQE 350, the AMG EQE is focused on performance with AMG-tuned motors, while 4MATIC+ is a fully variable AWD setup that enhances the car’s driving dynamics. In Sport and Sport+ modes, torque is more rear-wheel biased. Four-wheel steering is also on board, which rotates the rear wheels in the same direction as the front ones for ultra-quick lane changes and transitions. Obviously, since this is a full-fledged AMG product, a high-performance braking system with six-piston callipers and 415-mm discs up front as well as single-piston units pinching 378-mm discs at the rear.

The comfort aspect hasn’t been overlooked either, with a standard AMG RIDE CONTROL+ air suspension, which is said to balance ride quality during relaxed driving, and sportiness during spirited driving. 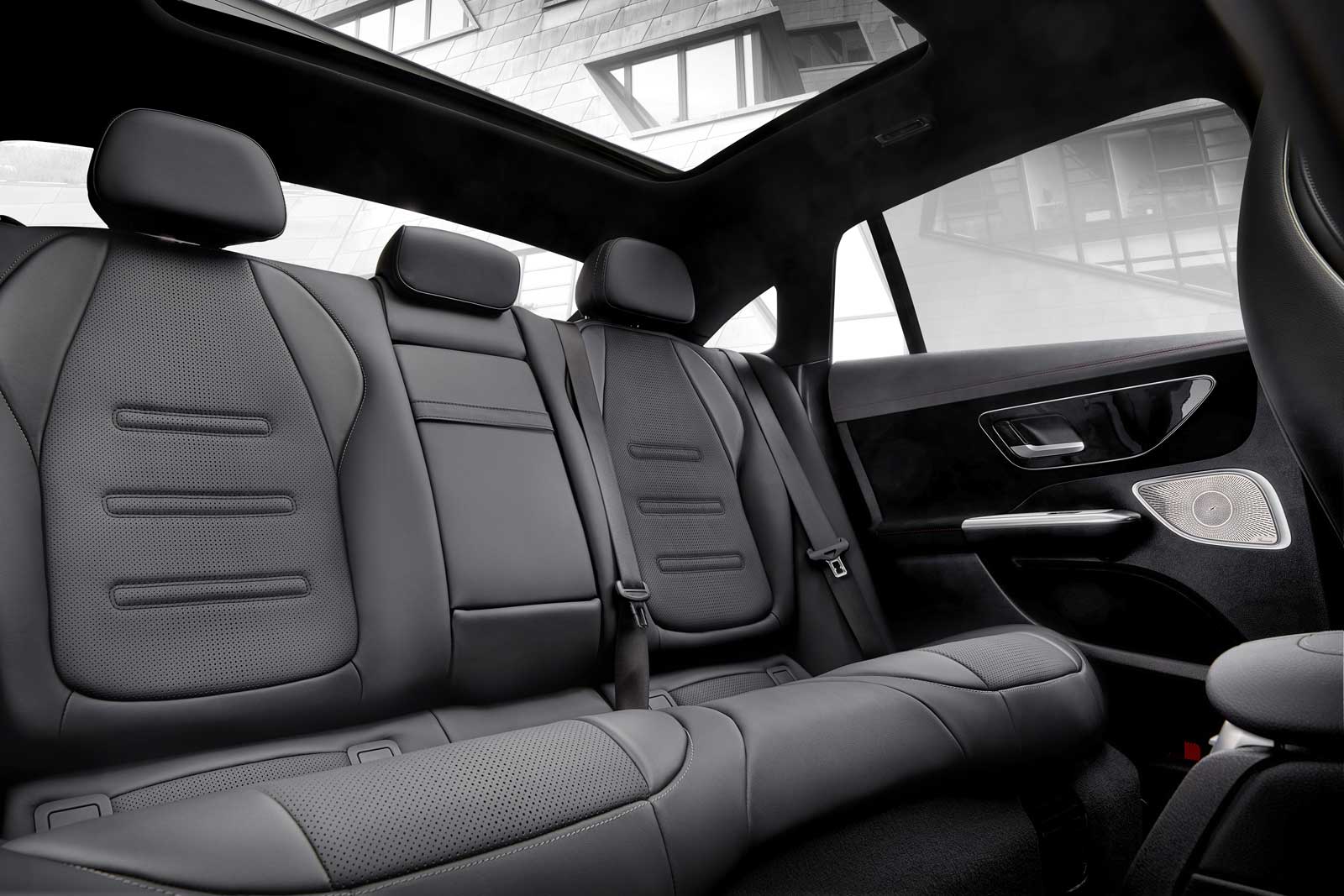 The 2023 Mercedes-AMG EQE 4MATIC+ also gets what is called AMG SOUND EXPERIENCE, providing aural excitement or relaxation depending on the driver’s mood, with Authentic, Balanced, Sport and Powerful. The AMG DYNAMIC PLUS Package also adds the Performance setting for “an even more emotional soundscape.”

Inside, the AMG EQE is dressed in ARTICO man-made leather with NEOTEX grain and red contrast stitching, microfibre trim, an AMG Performance flat-bottomed steering wheel with aluminum paddle shifters and more. The MBUX infotainment system can be upgraded with a Hyperscreen setup, or a curved display that extends across the width of the dashboard.

Pricing hasn’t yet been announced, but the 2023 Mercedes-AMG EQE 4MATIC+ should arrive in Canada and the United States in late 2022.

The MINI Clubman is no longer available in Canada. Simplified equipment group lineups across the model line. New colours, new features, and of...
Read more
Previous articleFuture Buick EV Crossover Teased
Next articleThe End of the 3G Network Means That Some Vehicles Will Lose Features