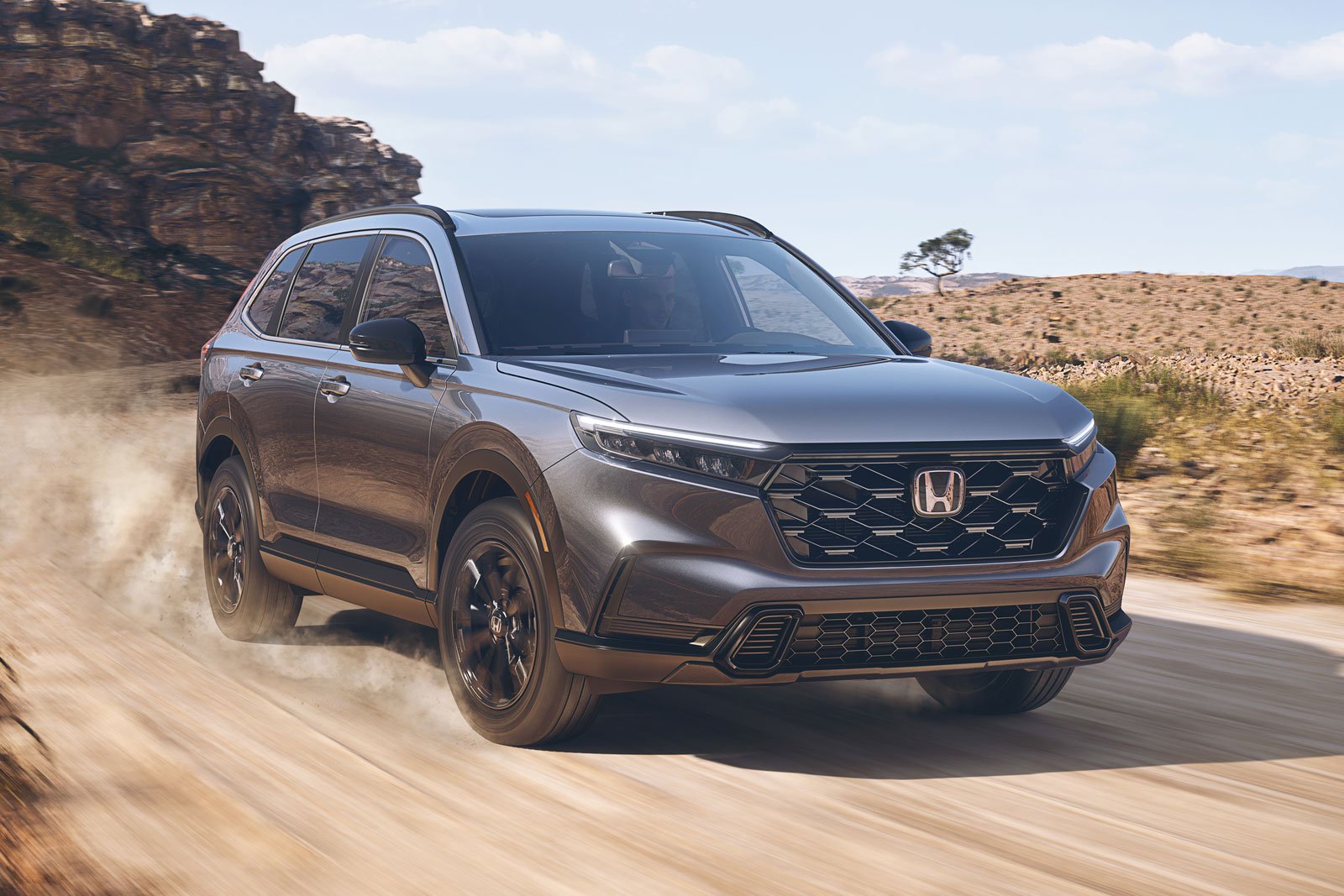 A very busy year for Honda.

Honda has rebooted its crossover lineup with three redesigned models for the 2023 model year, in addition to an all-new midsize sedan and a rebooted hot hatch.

Meanwhile, the automaker has been busy teasing its first fully electric crossover due for the 2024 model year, developed in collaboration with General Motors. Here’s what to expect from the Honda brand in 2023, with models listed in alphabetical order.

The 11th-generation Honda Accord has landed with all-new styling, with a longer body and a slightly wider track. The sedan also boasts new wheel designs and a few new paint colors, while the rebooted interior receives a standard 10.2-inch digital driver instrument cluster, a seven- or 12.3-inch infotainment touchscreen with available Google built-in functionality, over-the-air updates and more. In the U.S., LX and EX trims are equipped with a revised turbocharged 1.5L inline-four that develops 192 horsepower and 192 pound-feet of torque, while Sport, EX-L, Sport-L and Touring trims get a new hybrid powertrain consisting of a 2.0L four and two electric motors for a combined output of 204 horsepower and 247 pound-feet—which Honda claims provides a sportier driving experience. In Canada, the EX gets the turbo engine, while the Sport and Touring variants are hybrid-powered.

The big news for the Honda Civic this year is the return of the mighty Type R hatchback, which received a full redesign. It’s equipped with a turbocharged 2.0L four that develops 315 horsepower and 310 pound-feet of torque, all sent to the front wheels via a six-speed manual gearbox. Otherwise, the mainstream Civic sedan loses its base LX trim level in the U.S., but keeps it in Canada. Meanwhile, the Civic Hatchback EX-L trim is dropped in the U.S., while in Canada, its mid-level Sport trim can no longer be ordered with a manual transmission. The Civic Si is unchanged for 2023. 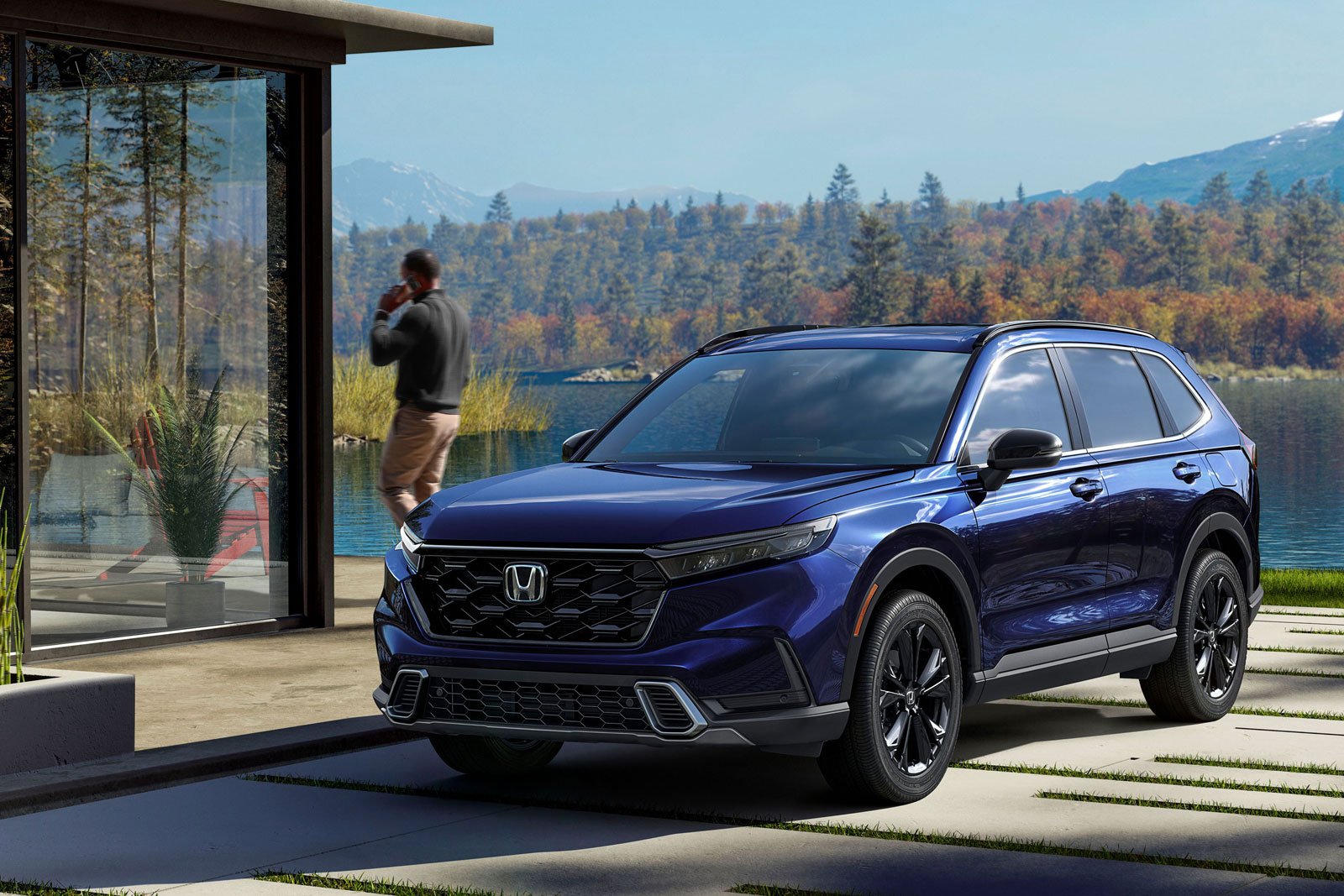 The Honda CR-V gets a major redo for 2023, ushering in the compact crossover’s sixth generation. In the U.S., EX and EX-L trims receive a revised turbocharged 1.5L four that develops 190 horsepower and 179 pound-feet of torque, while Sport and Sport Touring variants get a new hybrid system consisting of an Aktinson-cycle 2.0L four and two electric motors for a combined 204 horsepower and 247 pound-feet of torque. In Canada, LX, Sport and EX-L trims get the turbo engine while the range-topping Touring features the hybrid system. Inside, the new CR-V shows off new seven- and nine-inch infotainment system touchscreens, along with available wireless phone charging, a Bose 12-speaker sound system and navigation.

Redesigned for the 2023 model year, the new Honda HR-V arrived in dealership during the summer of 2022. Longer and wider than the outgoing generation, the HR-V also boasts a slightly longer wheelbase for a more refined ride, a revised rear suspension and standard hill descent control. A seven-inch digital driver instrument panel comes standard, while uplevel trims also get a nine-inch infotainment system touchscreen. Every HR-V now features a naturally aspirated 2.0L inline-four engine that develops 158 horsepower and 138 pound-feet of torque—small gains compared to the previous HR-V’s output of 141 hp and 127 pound-feet. The new HR-V is offered in LX, Sport and EX-L trim levels, with either a front-wheel or all-wheel drivetrain. 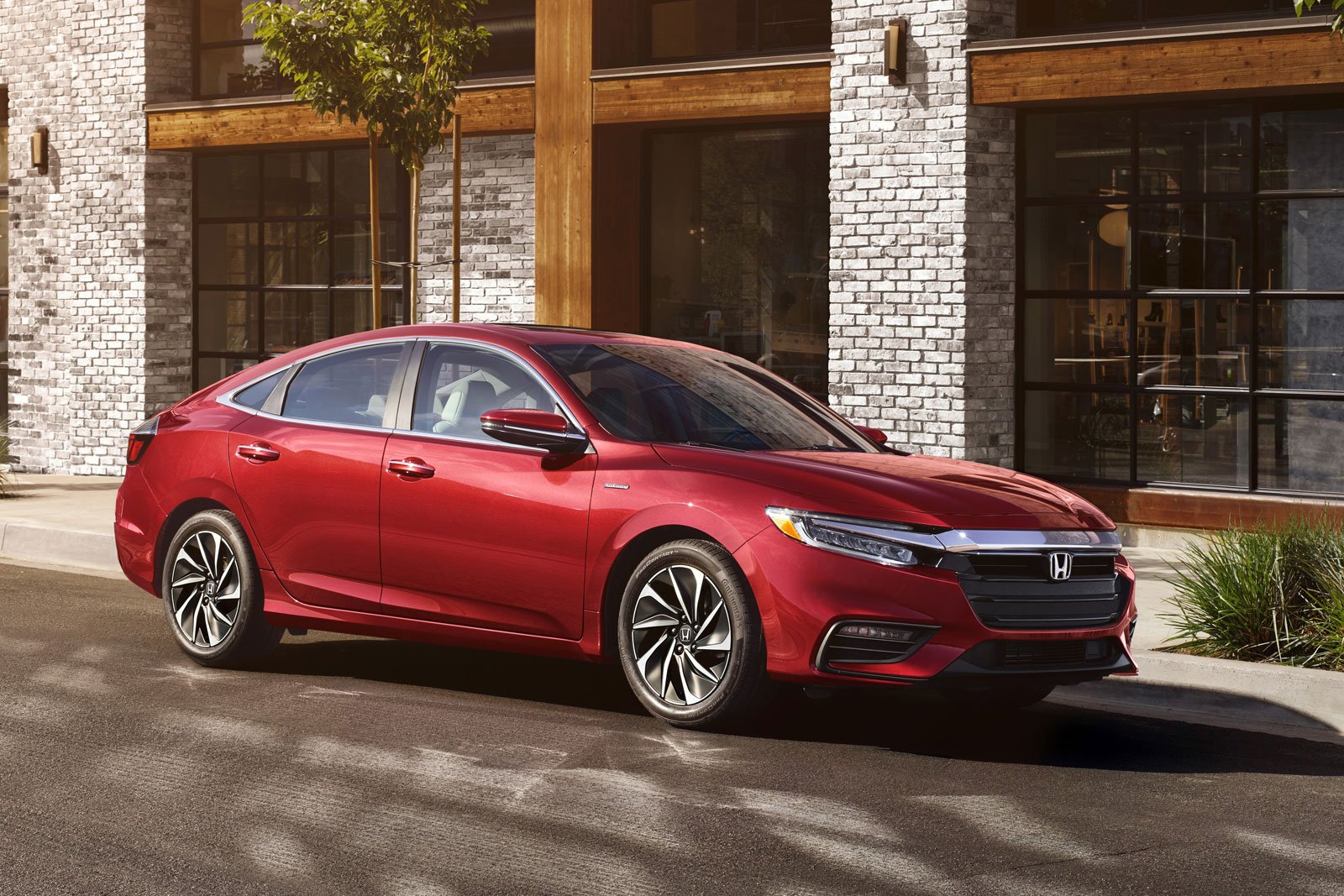 The Honda Insight was dropped from the Canadian market after the 2021 model year, and now, the hybrid compact sedan is being retired in the United States as well.

The 2023 Honda Odyssey arrived in dealers in the spring of 2022. It dropped its base LX trim level in the U.S., but there’s a sporty new trim level available to give the minivan a little more visual appeal. It’s called Sport in the U.S. and Black Edition in Canada, and adds darkened taillight clusters, black 19-inch alloy wheels as well as gloss black grille, headlight, fog light bezel, mirror and pillar trim. It also features black leather seating with red contrast stitching, a black headliner and red ambient lighting. The U.S. lineup now consists of EX, EX-L, Sport, Touring and Elite variants, while Canada gets EX, EX-L, Touring and Black Edition. They’re all equipped with a 3.5L V6 developing 280 horsepower and 262 pound-feet of torque, connected to the front wheels via a nine-speed automatic transmission. 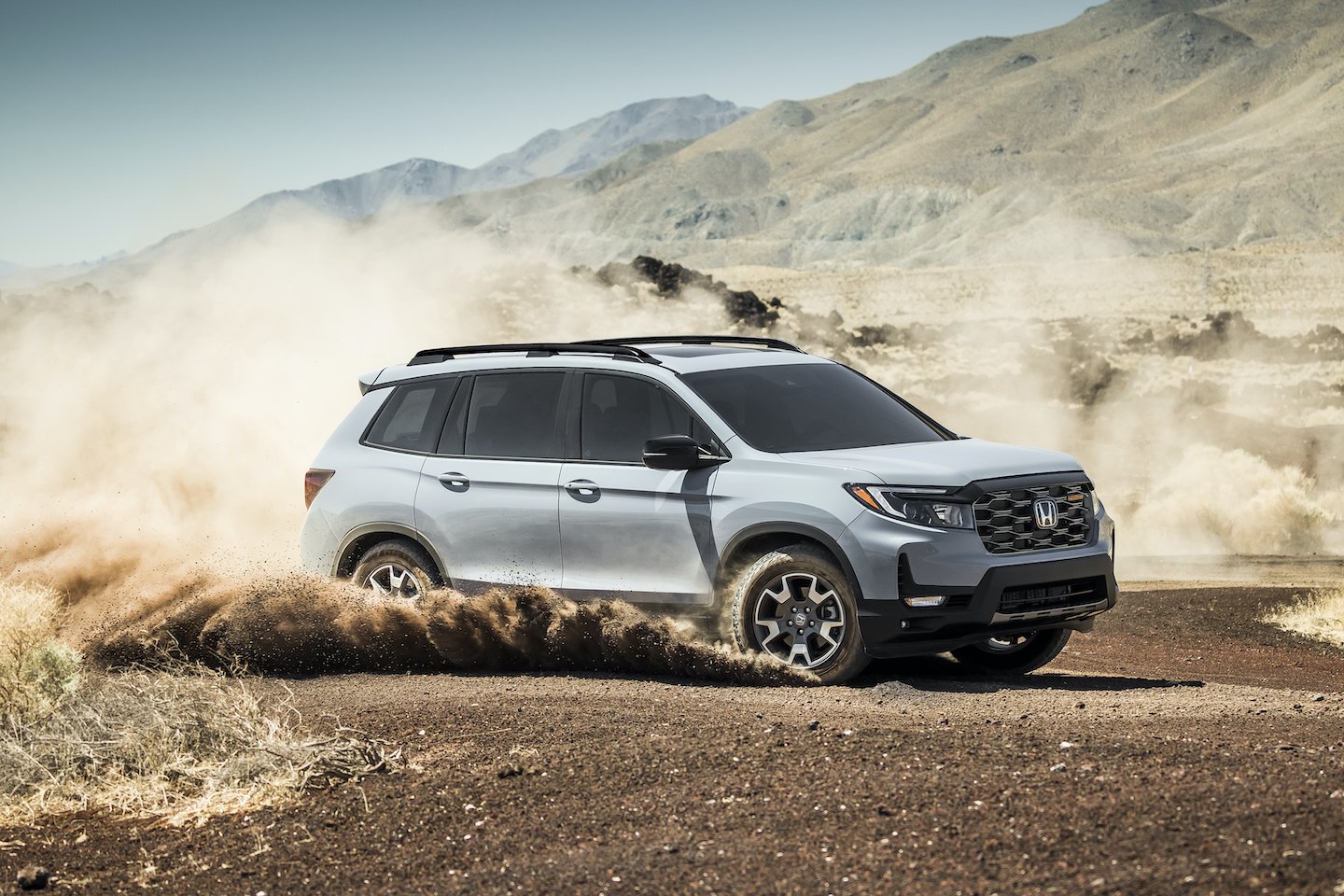 After receiving some styling enhancements and a new TrailSport trim level last year, the Honda Passport rolls into 2023 with no significant changes. The TrailSport targets more adventurous buyers, offering them a 10-mm larger track, unique 18-inch wheels, distinct grille and bumper detailing as well as orange interior stitching, heated windshield wiper zones and power-folding mirrors. Every Passport is equipped with a 3.5L V6 and a nine-speed automatic transmission, good for 280 horsepower and 262 pound-feet of torque. All-wheel drive is available in the base EX-L trim in the U.S., but standard on the TrailSport and Elite. In Canada, Sport, TrailSport and Touring trims all feature AWD as standard.

The Honda Pilot is all-new for 2023. The fourth generation of the midsize three-row crossover gets rugged new styling and slightly larger interior dimensions, while seven- and eight-passenger seating configurations are offered as before. The U.S. market gets Sport, EX-L, Touring, TrailSport and Elite trim levels, all equipped with a new 3.5L V6 and 10-speed automatic transmission combo that develops 285 horsepower and 262 pound-feet of torque—five ponies more than last year. The Canadian market gets Sport, EX-L, TrailSport, Touring and Black Edition trims, all featuring AWD as standard. Inside, the new Pilot gets a seven- or nine-inch infotainment system touchscreen, while a Bose 12-speaker sound system, color head-up display, navigation, wireless phone charging, a 10.2-inch digital driver instrument cluster and a 360-degree camera system are all available in uplevel trims. Last but not least, a new HPD package is now available, adding 20-inch matte black wheels, fender flares, skid plates as well as HPD decals and badging to the Pilot. 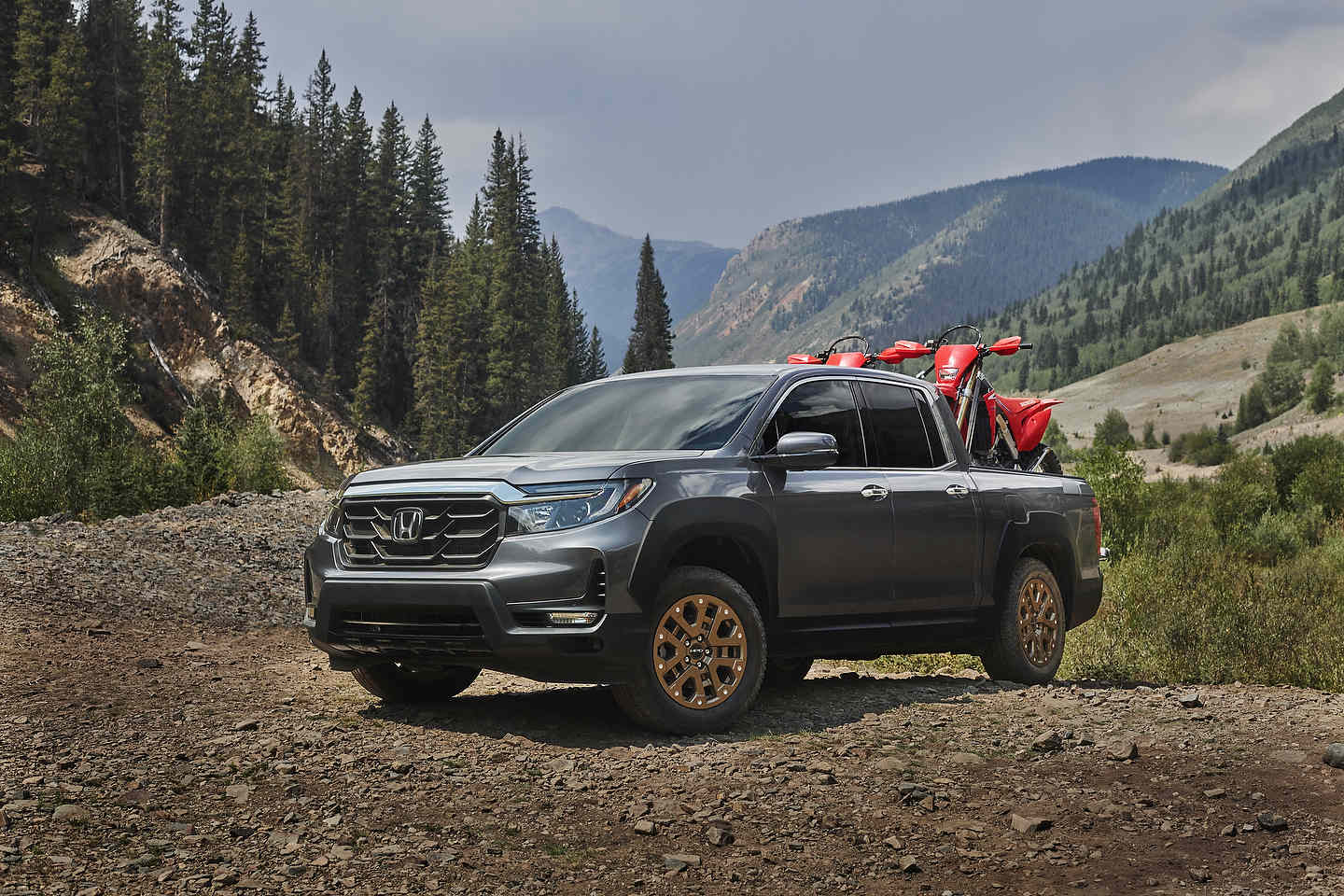 The Honda Ridgeline returns in 2023 with no significant changes. The midsize pickup is available in Sport, RTL, RTL-E and Black Edition variants in the U.S., and in Sport, EX-L, Touring and Black Edition in Canada. It’s equipped with a 3.5L V6 that develops 280 horsepower and 262 pound-feet of torque, a nine-speed automatic transmission and standard AWD.