News How We Would Spec a 2019 Toyota Tundra

How We Would Spec a 2019 Toyota Tundra 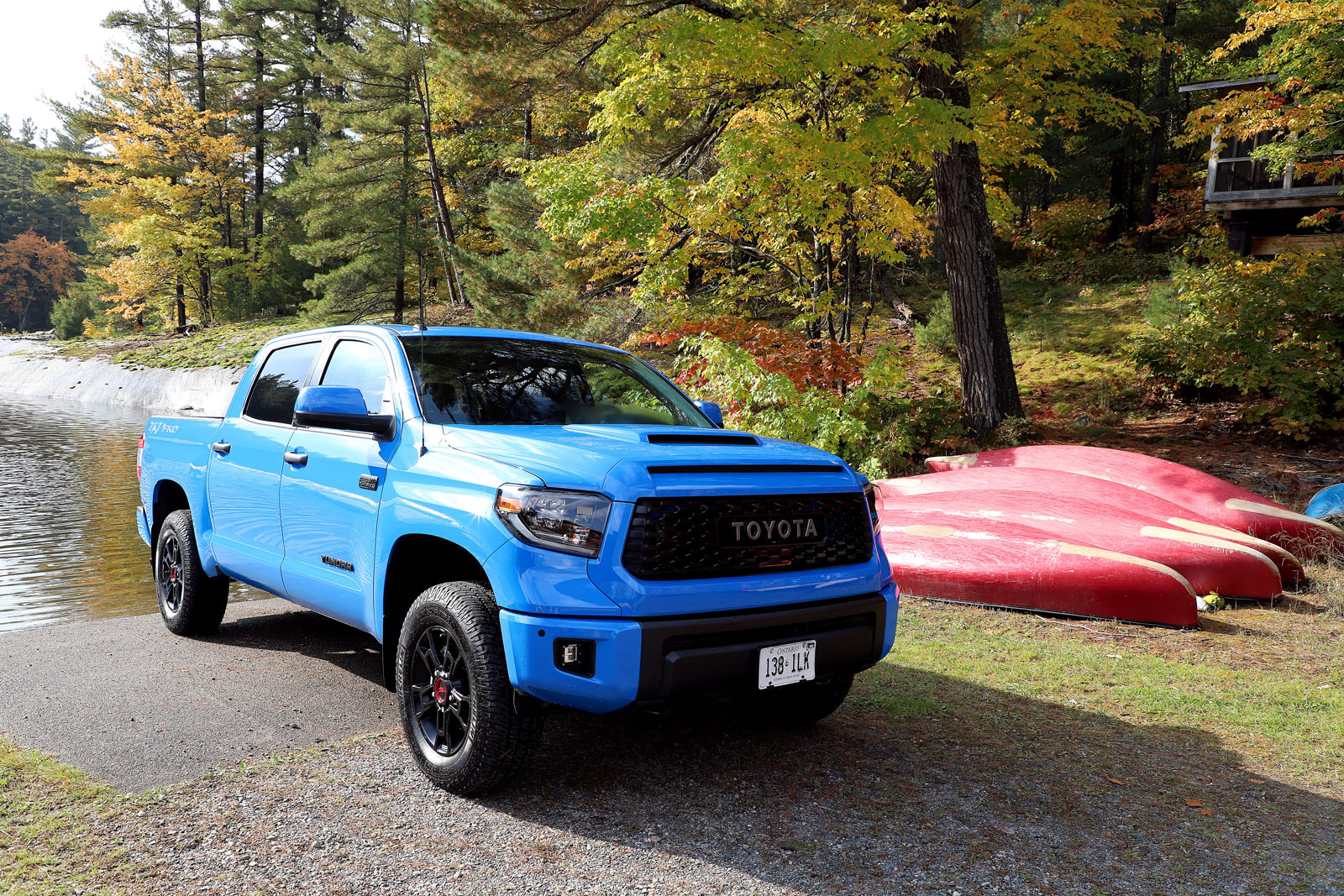 Sales numbers may not reflect it, but there’s something that’s easy to love about the Toyota Tundra full-size pickup.

Of course, the 2019 Toyota Tundra and every other Tundra before it have and had an uphill battle to even get close to the kind of sales numbers Ram, GM, and Ford reach with their 1500, Silverado and Sierra, and F-150 respectively. But Toyota knows this. Good on them, they did not try to make the Tundra something that it’s not.

It can’t tow the ridiculous weights some of its heavy duty competitors can pull, but it has a big 5.7-liter V8 engine that can haul 4,535 kg or 10,000 pounds without too much effort.

The Tundra is a massive beast, looking more menacing than any entry-level full-size pickup built in the United States. It looks more upscale too, and it drives more upscale as well. The Tundra’s cabin is a good place to spend some time, even if it is getting a bit dated. The 2019 Tundra is comfy, relatively agile for a big truck and a good highway cruiser.

Of course, sending 381 horsepower and 401 pound-feet of torque to the pavement has its fuel economy pitfalls. You won’t do too well in the fuel consumption department with the Tundra easily drinking more than 15.0 liters of fuel per 100 kilometers. Easy, easy, easy. There’s also a 310-horsepower V8 engine, but there’s no need to go there.

On the other hand, you expect your truck to do that. There are more efficient options on the market in this price range, but if you’re thinking Tundra you know this and don’t care. As a matter of fact, if you’re thinking Tundra it’s probably because you want something different, something that’s not American, and you know all the areas where the Toyota full-size truck can’t match up with Ram, GMC, Chevrolet, and Ford.

“We know what doesn’t work in the Tundra and what does. If you want a truck to daily drive and something that stands out visually, it’s a great option. It’s for those people who want to be different”, a sales rep at a Toyota dealership said when we called to see what kind of inventory was available.

If we decided to go Tundra, this is how we would spec it. Unlike other full-size trucks, the 2019 Tundra’s lineup is fairly straightforward. There are not a ton of versions and just one engine. That makes things a lot easier than other pick-ups.

There is no way in heck we would buy a 2019 Toyota Tundra without the 5.7-liter V8 engine. You can completely disregard the entry-level V8. There is no way we would get a 4×2 Tundra either. Our intention is to use our Tundra as a daily vehicle and so we want the added space of the CrewMax version with four real doors. The base price for a 2019 Toyota Tundra 4×4 CrewMax is $47,990 for the SR5 model, but we want more features.

Let’s go a bit crazy here shall we. This may be very difficult to find, but why not a red 2019 Toyota Tundra? We are in luck, Toyota offers Barcelona Red which is just about what we want. It’s not wine red, but not too light either. And it’s metallic.

Lease or Finance the 2019 Toyota Tundra?

The total price for our 2019 Toyota Tundra LTD CrewMax comes out to $57,285. Slightly ouch, but as anyone who uses Toyota’s Tundra configurator can see, there are a lot of deals offered on Toyota’s full-size truck.

We could finance at just 1.49 % interest for 60 months, but we will do everything we can to find some outside financing at less than 7.0 %. Here’s why. The Tundra is currently offered with an $8,000 rebate that you only get if you pay cash. Therefore, the interest rate seems low on financing, but you also have to include that extra “cost” of $8,000 into the equation. That brings the overall interest rate to nearly 8.0 %. Kudos to Toyota for actually sharing that info, by the way.

In other words, if you can buy your Tundra using a credit line on a house, for example, you could pay a lot less than 7.0 or 8.0 percent interest and benefit from the cash discount. That’s what we would do. If you can’t financing on 60 months at 1.49 %.

Hybrids and PHEVs are first. A full EV will come sometime after. The first hybrid is expected to be the Aventador for 2023. Lamborghini...
Read more
Previous article3 Things You Need To Know About The New Electric Polestar 2
Next articleFord Performance Supercharger Kit Gives Mustang GT 700 HP