News Indi One EV is a Car Wrapped Around a Supercomputer 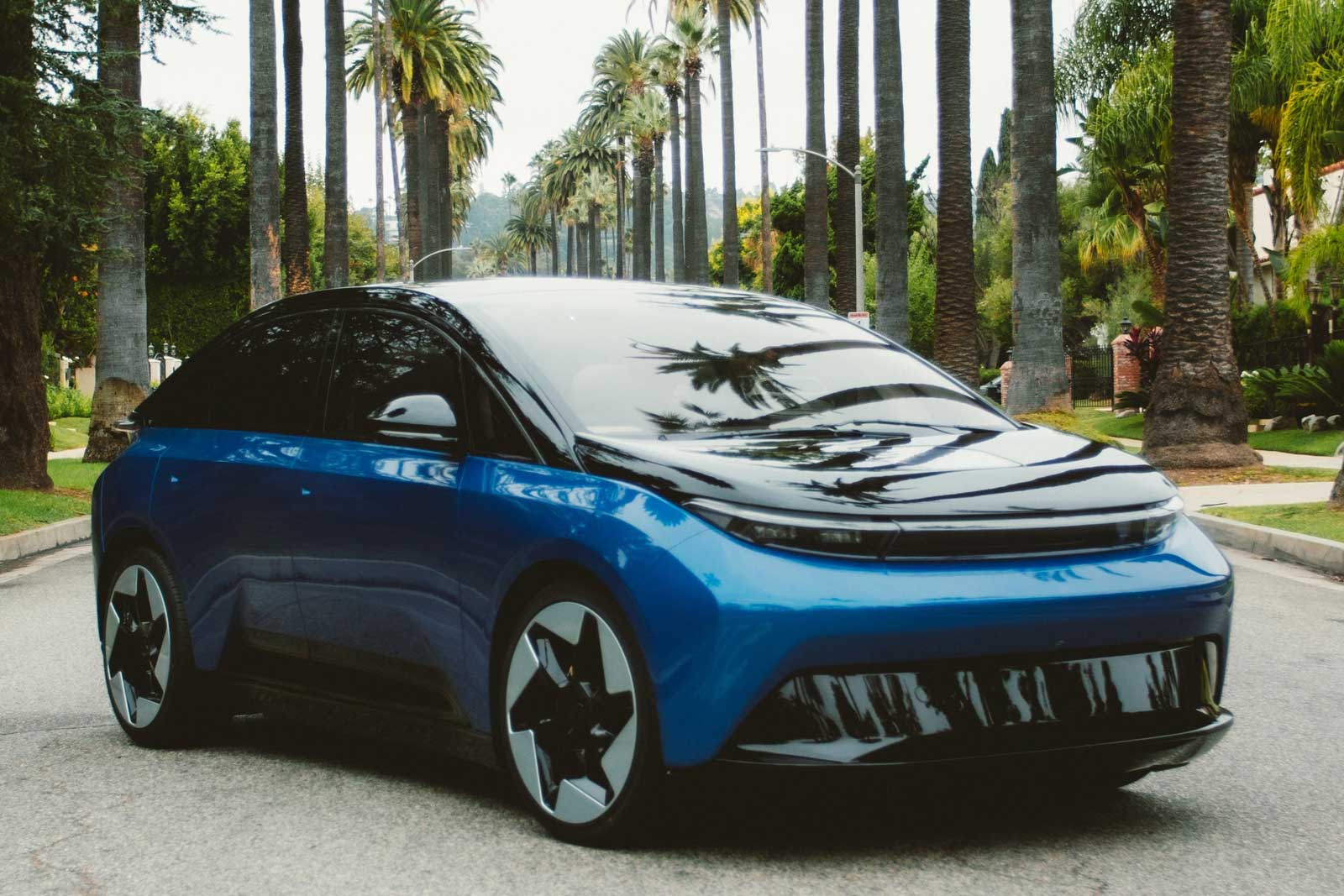 Processing power under the hood.

IndiEV is yet another startup hoping to cash in on the electric vehicle wave, and will launch its first product in the first quarter of 2024, a midsize crossover called the Indi One. Will this California-based company succeed where so many others have failed?

According to Andre Hudson, head of product design for IndiEV, established in 2017, it will, because it’s doing things differently. He joined the startup in 2019 after spending seven years at GM and twelve at Hyundai, where he helped design vehicles such as the Chevrolet SSR, the Saturn Sky, the Cadillac Cien and Cadillac Sixteen concepts as well as the sixth-generation, 2011-to-2014 Hyundai Sonata. 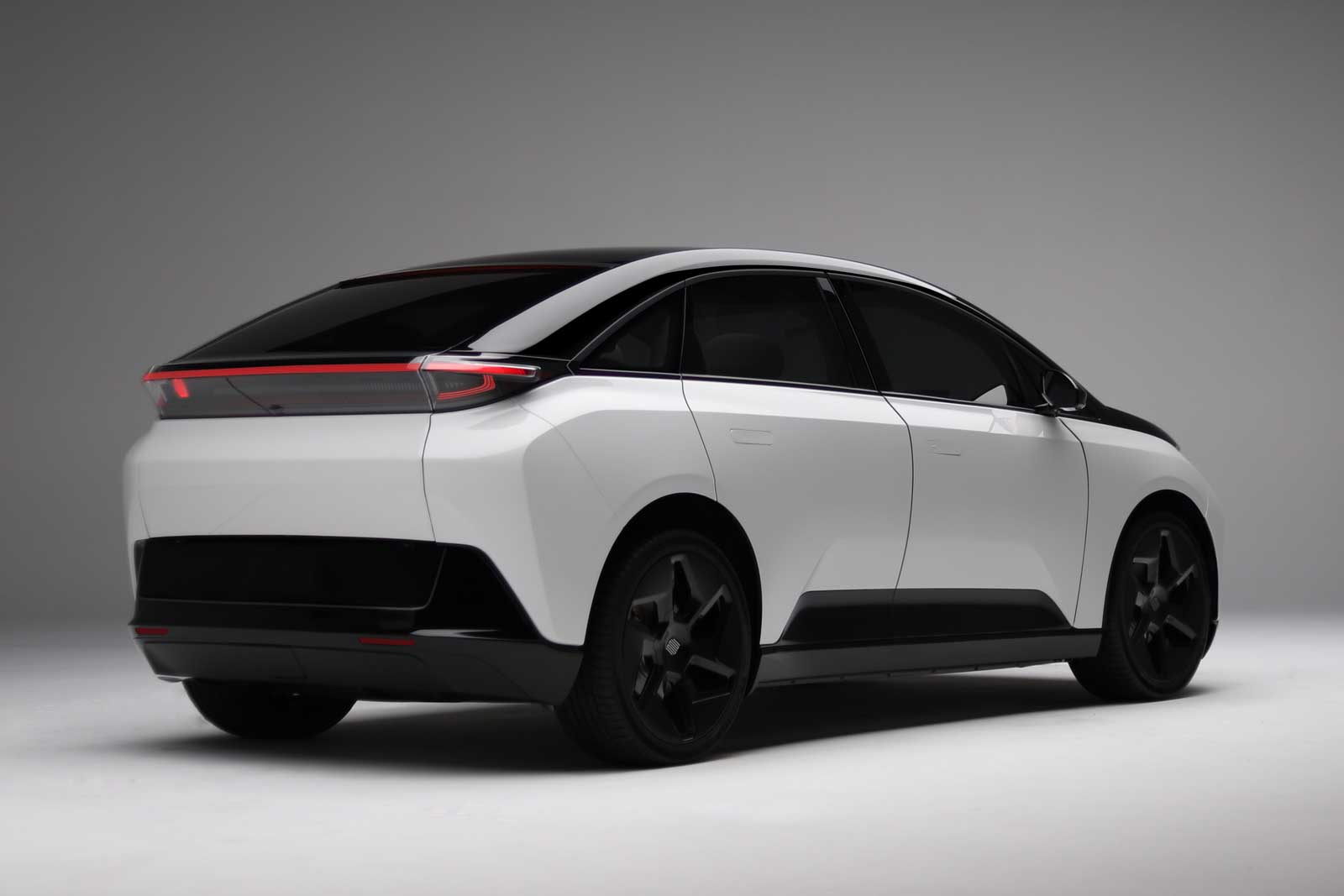 The Indi One is the new brand’s first vehicle, which debuted at the 2022 Consumer Electronics Show in Las Vegas back in January, and was also presented at the 2022 New York International Auto Show in April. Its design is fresh and youthful, drawing inspiration from the slick look of the latest smartphones, tablets, computers and game consoles. Which is fitting, since IndiEV’s founder made his fortune in the video game industry.

What’s different, according to Hudson, is that the Indi One isn’t just a car, but a game room and a content creation studio. It incorporates a supercomputer dubbed VIC, for Vehicle Integrated Computer, allowing owners to do everything they can do on their home computer, but on the go. The Windows-based VIC is open source and a Software Developer Kit (SDK) will also be offered, allowing owners to customize VIC to their needs and wants. VIC will also allow cryptocurrency mining and integrate blockchain technology, meaning the owner might even be able to generate revenue from the car. 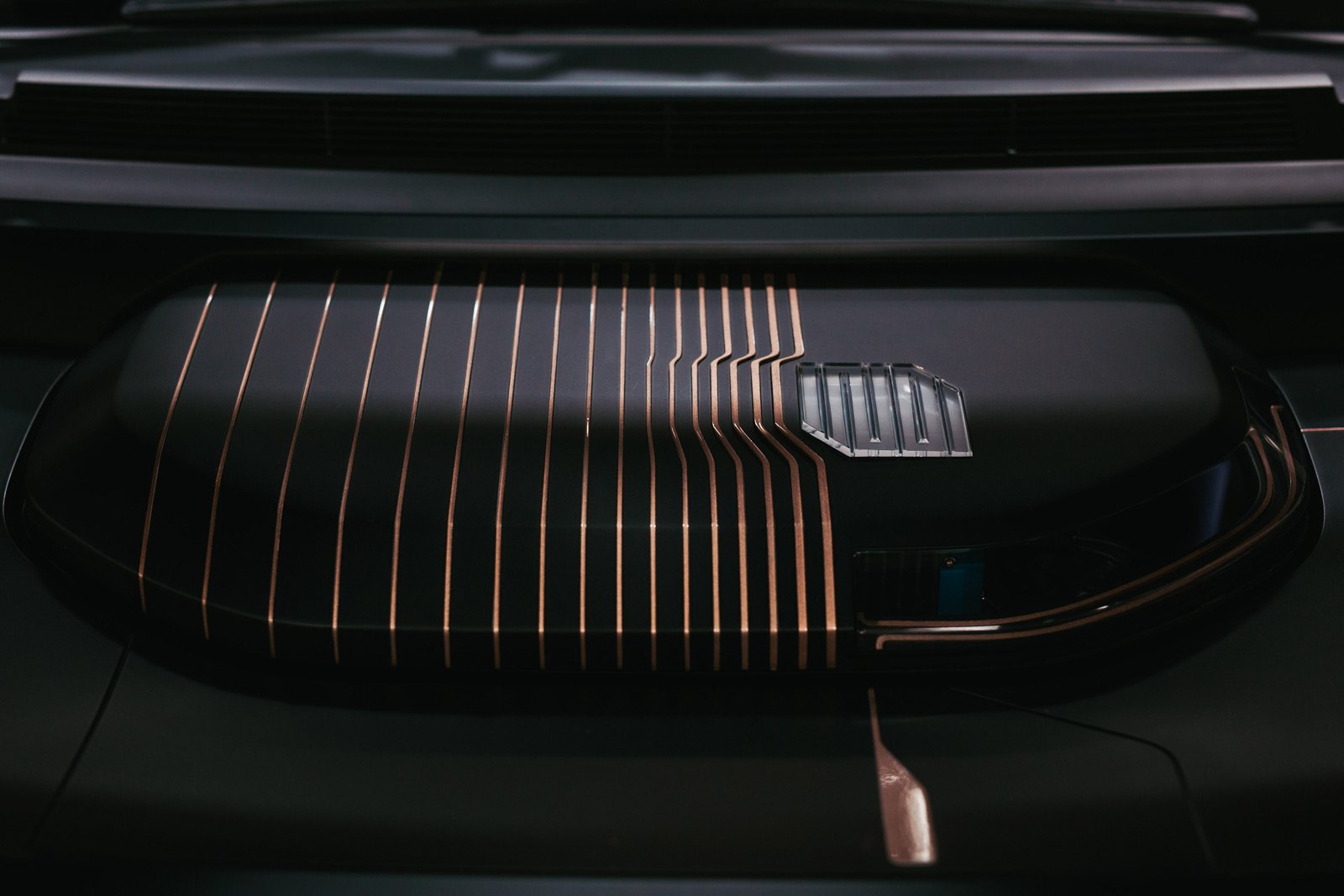 “As EV adoption increases, future generations will make their purchasing decisions based on vehicles’ computing power and how well their technology supports and enhances their lives. We feel confident that IndiEV is positioned favourably to capture the hearts and minds of these buyers,” said Hudson.

The Indi One looks small in pictures, but it’s actually quite big with an overall length of 189 inches (4,801 millimetres), a width of 78 inches (1,981 mm) and a roof height of 67 inches (1,702 mm). The company name drops the Ford Mustang Mach-E, Tesla Model Y, the Volkswagen ID.4 and the Hyundai IONIQ 5 as potential rivals, and although the car was designed with the in-cabin user experience in mind, the exterior styling is sleek and smart. Like any company flaunting its product, IndiEV says the Indi One was created “for movers and shakers, people who need to be ready for whatever life may throw at them.” 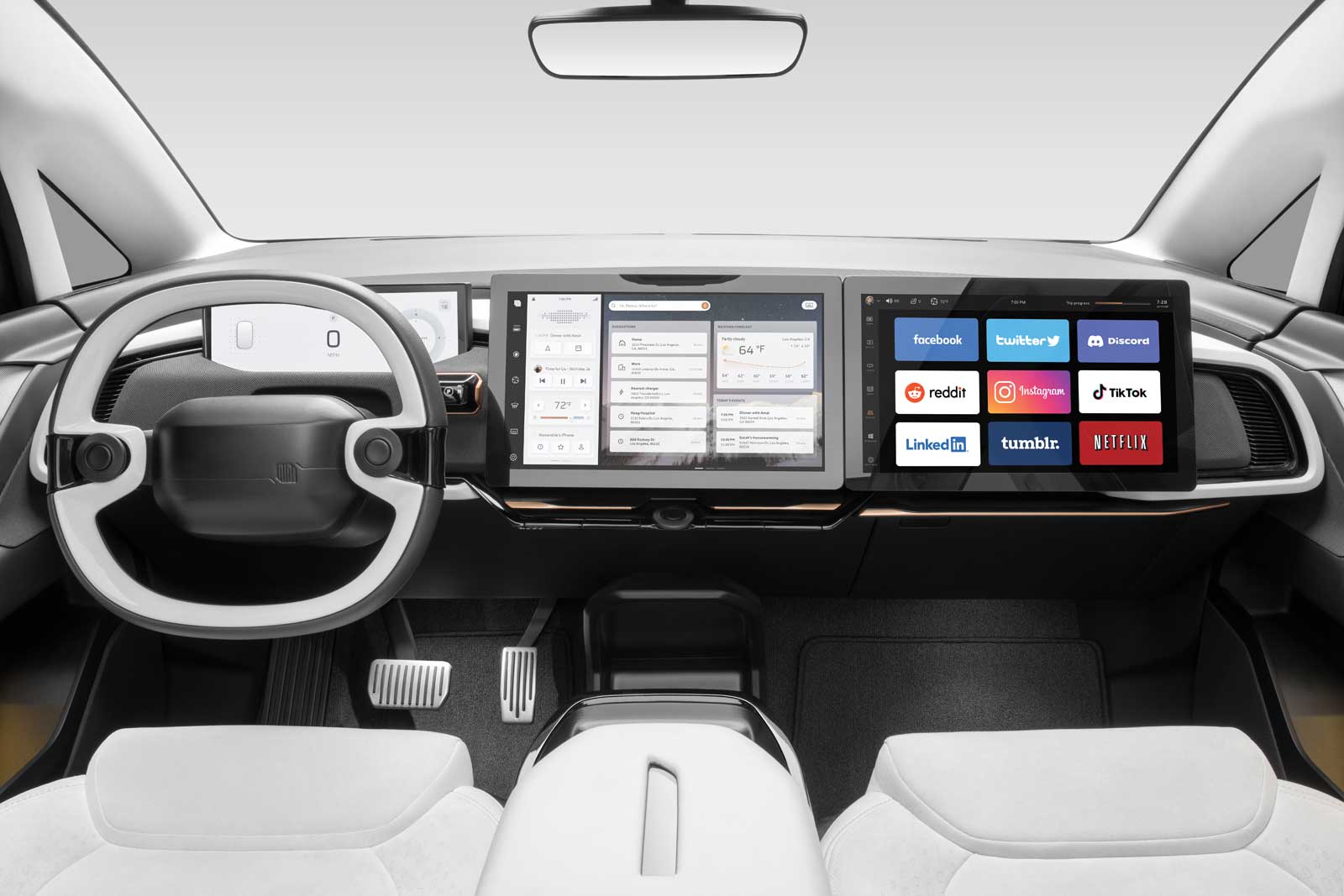 The five-passenger cockpit is filled with light from a standard panoramic glass roof, while the 43 cubic-foot (1,218-litre) cargo area includes a “Click and Lock” system so owners can print 3D parts to build gates, partitions and other stuff according to their needs. However, the focus is up front, where the steering wheel and small driver information center is adjacent to two 15.6-inch touchscreens. The center one is mainly used for the infotainment and climate systems, while the right-side display is directly connected to the on-board computer.

A keyboard and mouse can also be connected to the system to work more efficiently. Current regulations prevent the driver from seeing what’s happening on the rightmost screen, so it will be polarized so that only the front passenger can use it. There are five on-board HD cameras as well as microphones that can record footage inside the car, allowing for easy content creation and video conference calls. Passengers will be able to play games on the go, even VR games using a headset and controllers. IndiEV says its software is tweaked to prevent motion sickness as well. 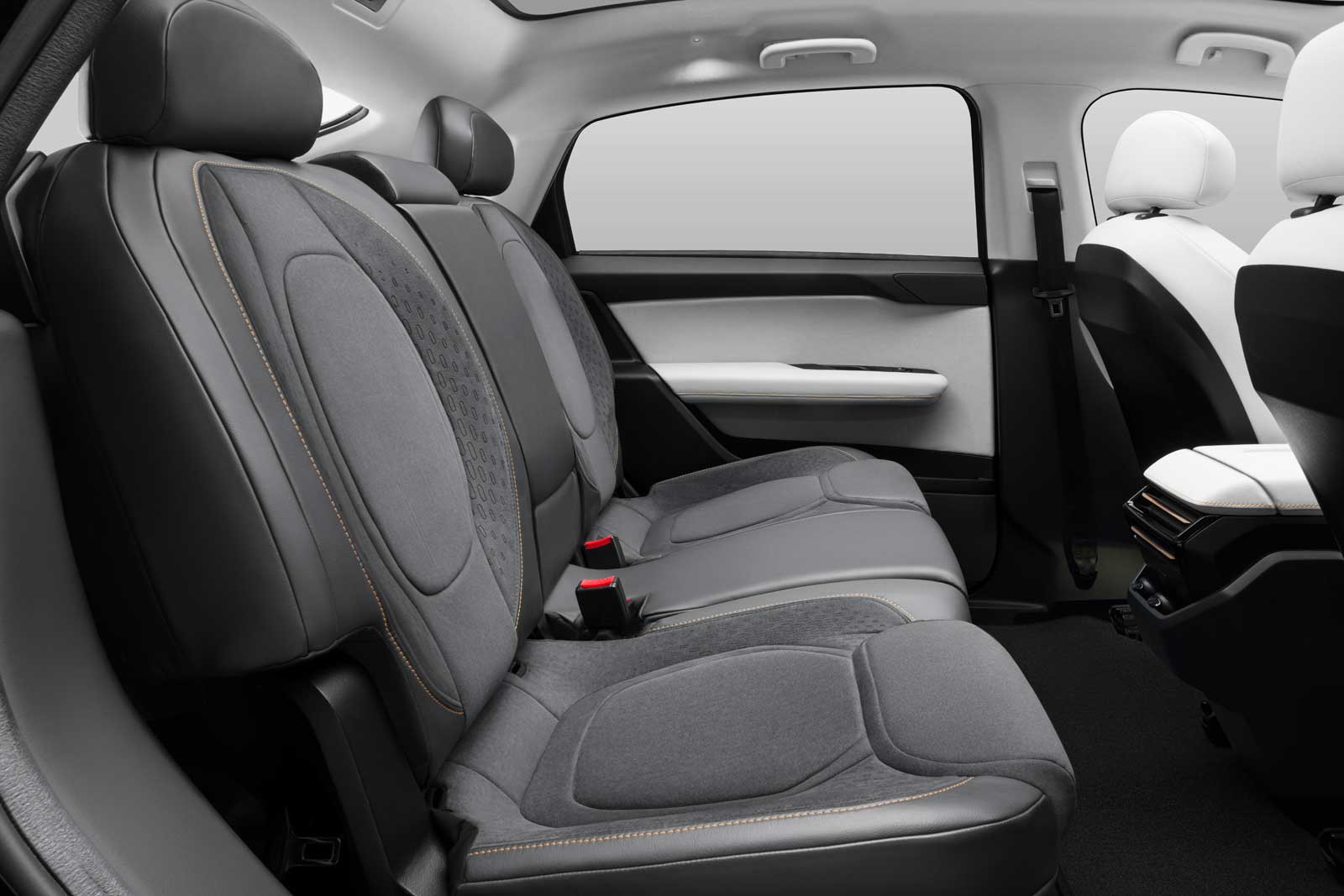 As for the actual car specifications, the Indi One will be available with two battery sizes. The base car gets a 75 kWh pack with an estimated driving range of 230 miles (370 km), while uplevel variants and the Launch Edition will get a 95 kWh pack with an estimated range of 300 miles (483 km). Charging speed is capped at 100 kW. Cars fitted with the bigger battery are equipped with two electric motors that develop a combined 475 horsepower and 538 pound-feet of torque, creating an all-wheel drivetrain, and according to the startup, it allows for 0-60 mph sprints of 4.2 seconds. The base car gets a single motor with 275 horsepower and 302 pound-feet of torque, good for 0-60 mph dashes of 6.7 seconds.

The Indi One features a host of advanced driving aids, and although the company says its future products will focus more on autonomous driving, this one is limited to Level 2 semi-autonomous tech. The steering wheel, called “Halo,” is said to consolidate all hazard warnings. For example, blind spot warnings show directional lighting on the wheel itself, with haptic feedback as well. IndiEV says this system is more intuitive than the usual warning lights and bells spread around the cabin whenever an advanced safety feature is triggered. 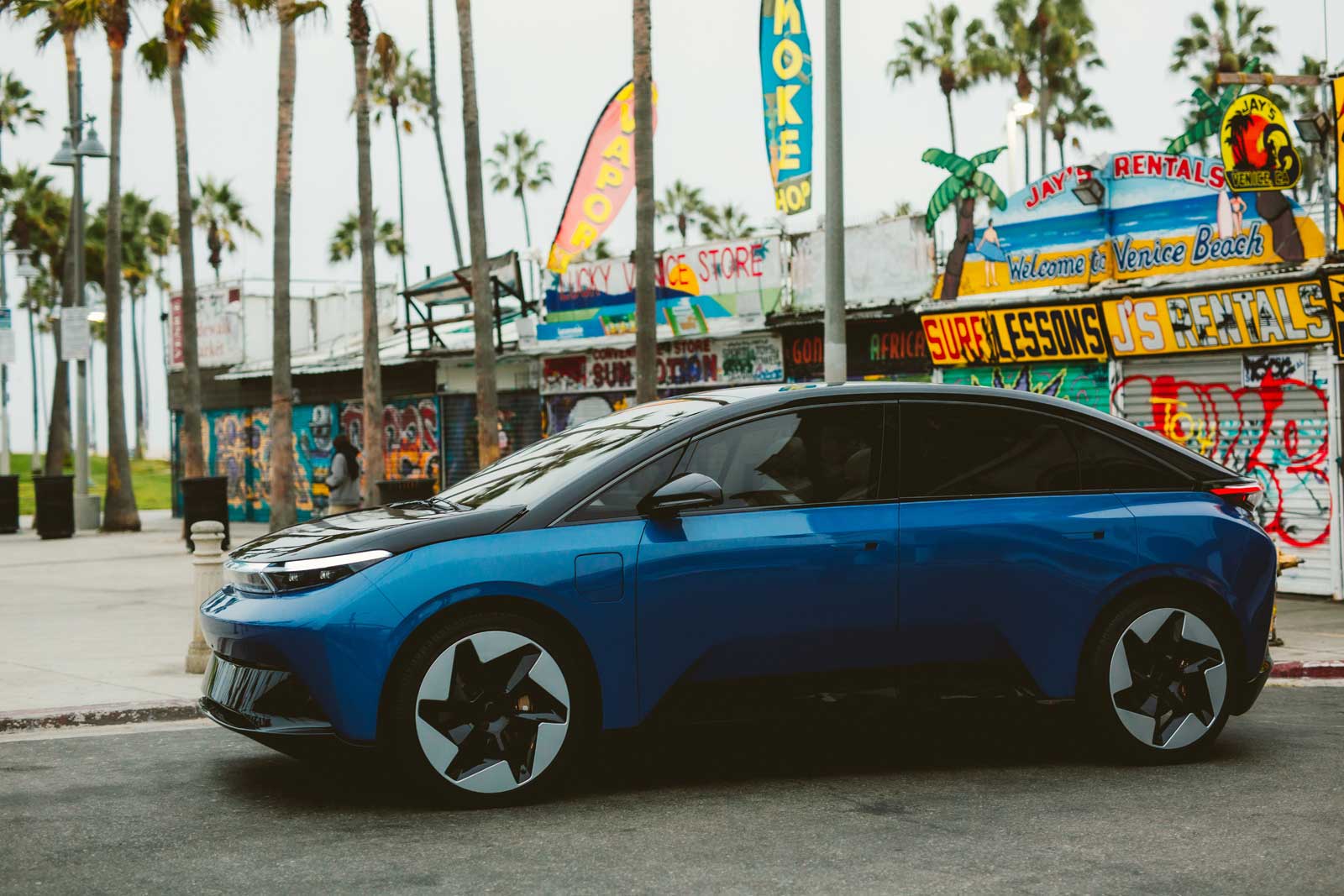 Interested customers can pre-order the Indi One, with each refundable reservation—which starts at $100 USD—including a unique gift package based on desired color and trim level. There are nine color schemes to choose from, and the base variant starts at $45,000 USD, while the uplevel Indi One’s price is set at $69,000. The car would be eligible for the current U.S. tax credit of up to $7,500. Initial sales and deliveries will be limited to the southwestern region of the United States, but should spread to other parts of the country afterwards. No mention of IndiEV’s potential presence in Canada yet. According to the brand’s website, deliveries are scheduled to start in Q2 2023, but during a recent conference call with the media, Andre Hudson stated that the delivery start date would be Q1 2024.

The Next-Generation Audi RS 6 Will be a PHEV

The replica is one of 299 made by The Little Car Company under license from Ferrari The car is scaled to be 75%...
Read more

This amount was up 76% from five years ago. Ford products have been recalled more than 4.5 times more than GM vehicles. Recall stories...
Read more

The Next Tesla Gigafactory Could be in Canada

Elon Musk has hinted at a Canadian factory twice now Talks with the province of Quebec are apparently underway Mexico is still a...
Read more

The Cybertruck was announced back in November of 2019 with deliveries scheduled to start in late 2021 This was pushed back a number...
Read more
Previous articleConfirmed: More than 800 Horsepower for the Polestar 5
Next articleBattery Problems Force Volkswagen to Pause Production of the ID.Buzz

The hybrid hypercar is built in the United Kingdom The manufacturing process includes 16 steps The powertrain is created by the same team...
Read more
News

Buying a three-year subscription to OnStar and connected services is now mandatory on some models The entire lineup of Buick, Cadillac and GMC...
Read more
News

New Zealand-based company built car "without limitations" of rules 8,000 lbs of downforce, 1,100 horsepower Cars from New Zealand is launching one of the...
Read more
News

The Stuttgart-based manufacturer has just added another important mark to its already impressive list of achievements, and this one concerns a production car. Indeed,...
Read more
News