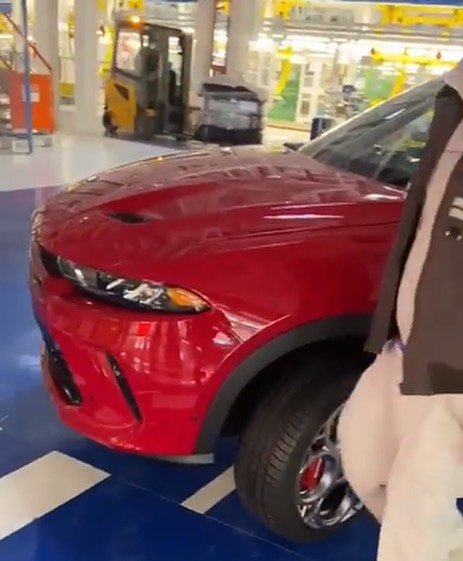 The 2023 Dodge Hornet has leaked, allegedly. The newest crossover from Dodge looks to be a rebadged Alfa Romeo Tonale, at least in these photos of it on a factory floor.

Two pics of the car were posted to Instagram by cmarzen_209. One of the outside, at least the very front end of the crossover. It shows a typically Dodge aggressive nose with two large hood scoops. Showing that this is an early production or prototype model, the purported new Hornet is wearing the same wheels as those shown on the Tonale.

Inside, it shows an interior that is a change from modern Dodge interiors. A large start button on the left-hand side of the wheel sits in front of a digital dashboard display. It’s also said to use the Stellantis Uconnect system for infotainment and will, like the Tonale, reportedly come with a 256 hp 2.0L turbo-four. Lower power drivelines are also expected down the road, possibly the 1.3L four-cylinders offered by the Tonale as well.

We’re not sure when the vehicle will be revealed, but expect it in the next few months. With Dodge’s lineup, now including only the Charger, Challenger, and Durango this is desperately needed for the brand’s future.

The automaker has already signed an agreement with the federal government. Other sites in North America are still being considered. This will be...
Read more
Previous articleFord Broncos Off-Road Onto Ford Storage Lot Once Again
Next article2022 Toyota Sienna Hybrid Trim Review: Toyota Canada Makes You Pay for the Sienna You Need