A slew of fully electric EQ models on the way.

German brand Mercedes-Benz is investing heavily in electrifying its product lineup through its recently introduced Mercedes-EQ division, and several fully electric models will launch over the next couple of years.

Of course, performance fans should not fret as Mercedes-AMG will continue to crank out its usual onslaught of ultra-powerful machinery, while Mercedes-Maybach will cater to deeper-pocketed folks who desire more cachet and exclusivity. Here’s what to expect from Mercedes-Benz in 2022.

The Mercedes-Benz EQS is the brand’s new flagship EV sedan, and it’s available in Premium, Exclusive and Pinnacle grades in the United States. The rear-wheel-drive EQS 450+ produces 329 horsepower and 417 pound-feet of torque, and offers a driving range estimated at 350 miles or 563 kilometres. The EQS 580 gets a two-motor setup and AWD, with 516 hp and 631 pound-feet, along with a driving range of 340 miles or 547 km. Meanwhile, the high-performance AMG EQS will dish out 649 hp and 700 pound-feet of torque, or 751 hp and 752 pound-feet with an overboost function, and its 0-60 mph acceleration is pegged at 3.4 seconds. For now, only the EQS 580 in a single trim level will be available in Canada. 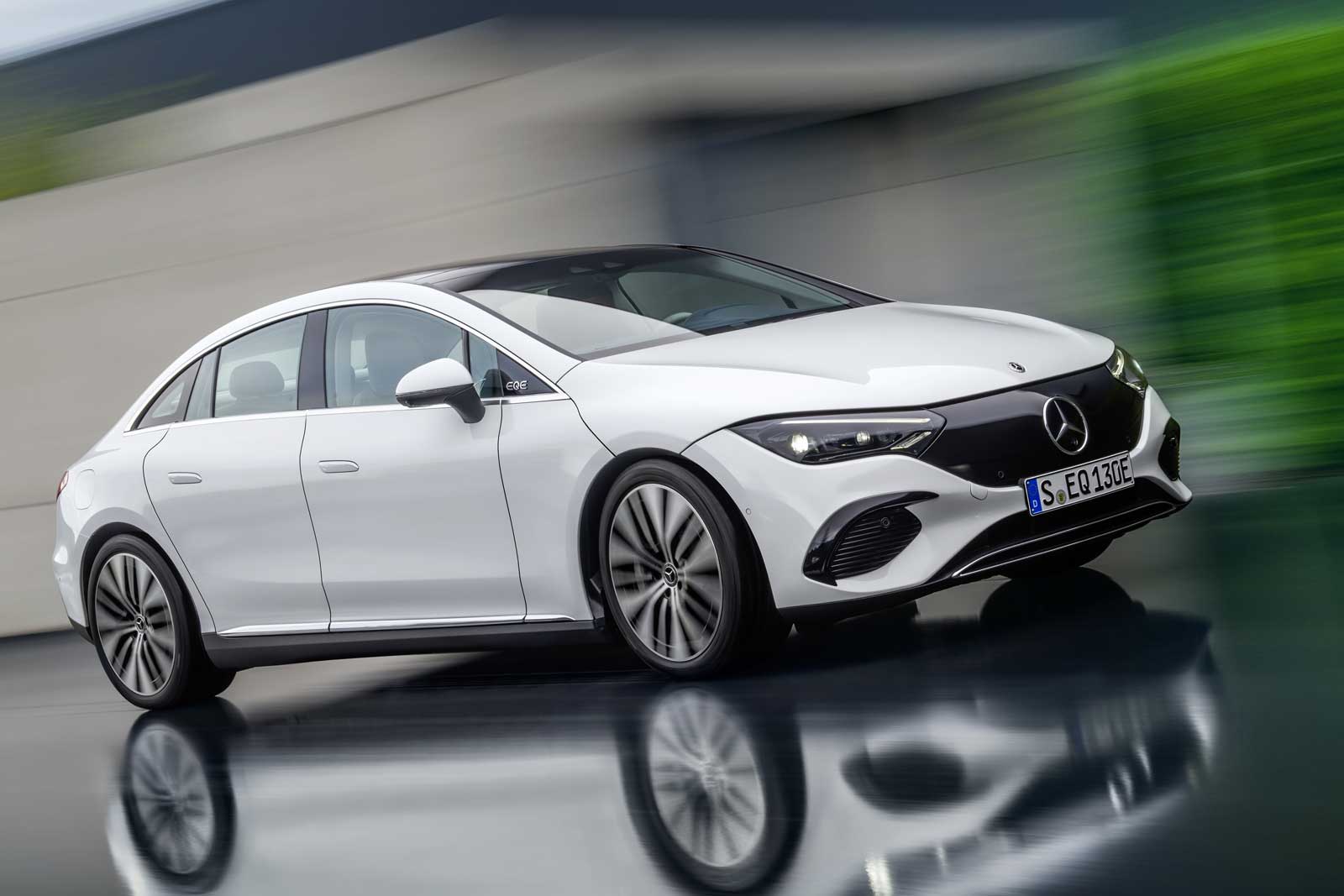 Following in the EQS’ path is the also-new, midsize Mercedes-Benz EQE sedan whose production is scheduled to start in mid-2022. It will be offered in EQE 300 configuration with 288 horsepower and a WLTP estimated driving range of 660 kilometres or 410 miles, through the EPA and NRCan figures should be lower. A second powertrain will be announced later this year, likely an EQE 450+ or an AMG EQE. 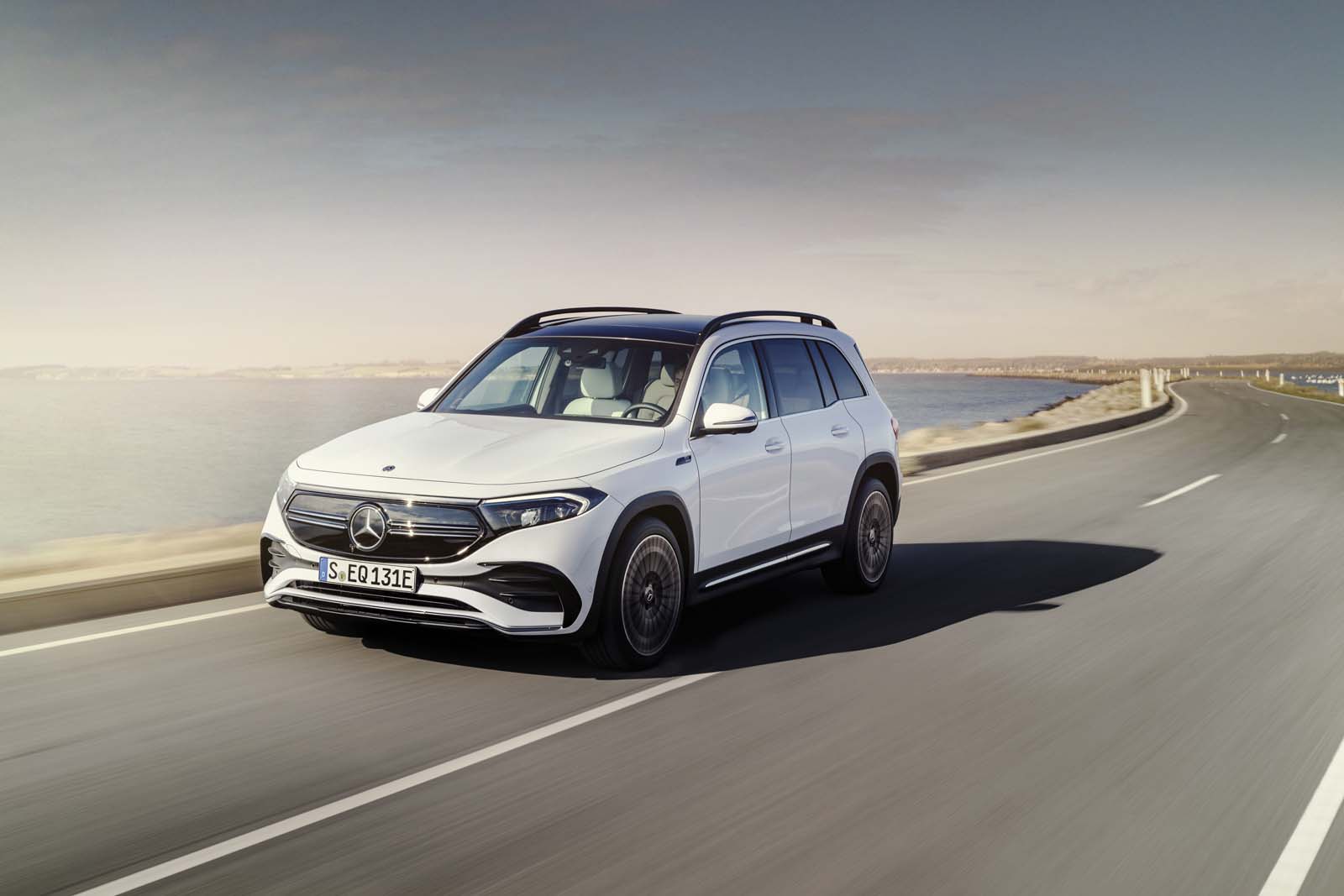 On the electrified crossover side of things, the Mercedes-Benz EQB is on its way as well. The EQB 300 4MATIC should develop 225 horsepower, while the EQB 350 4MATIC should serve up 288 hp. A front-wheel-drive variant and a long-range variant will be introduced afterwards. For now, only an optimistic WLTP estimated range of 419 kilometres or 260 miles has been announced, although the EPA and NRCan figures should be lower than that.

Meanwhile, the company recently unveiled the Mercedes-Benz VISION EQXX, which is more of a range-busting exercise than an all-out luxury machine. The VISION EQXX is claimed as being “the most efficient Mercedes-Benz ever built” with an energy consumption of less than 10 kWh/100 km. It also boasts a powertrain developing about 150 kW or 201 hp, as well as a driving range of more than 1,000 kilometres or 620 miles on a full charge, achieved in part thanks to the car’s exceptional drag coefficient of 0.17. 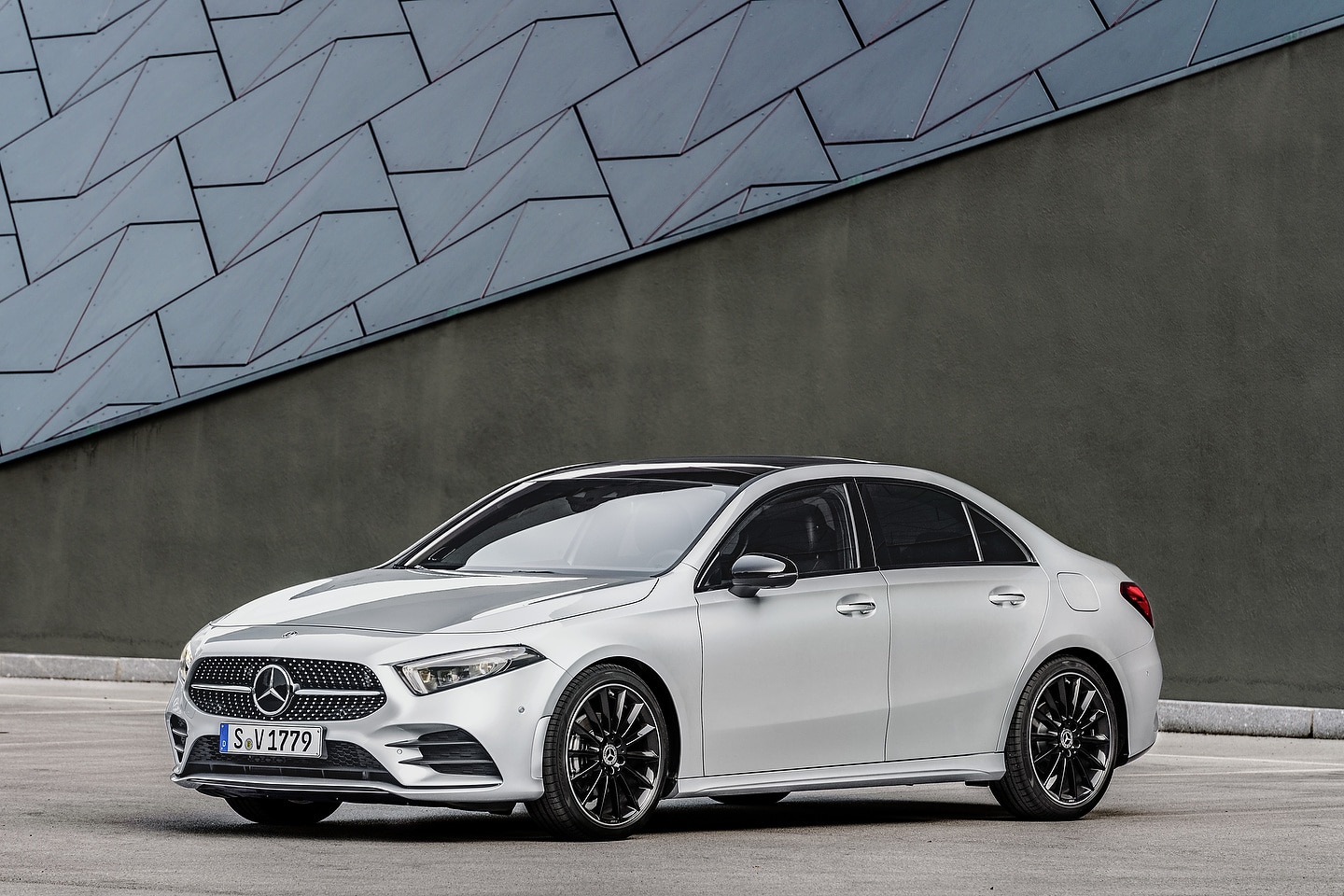 The Mercedes-Benz A-Class is available in sedan and Canada-only hatchback body styles, with a turbocharged 2.0L four developing 188 horsepower (sedan) or 221 hp (hatchback), along with optional AWD. The performance-minded Mercedes-AMG A 35 4MATIC variants get 302 horsepower, and are only offered in Canada, not the U.S. 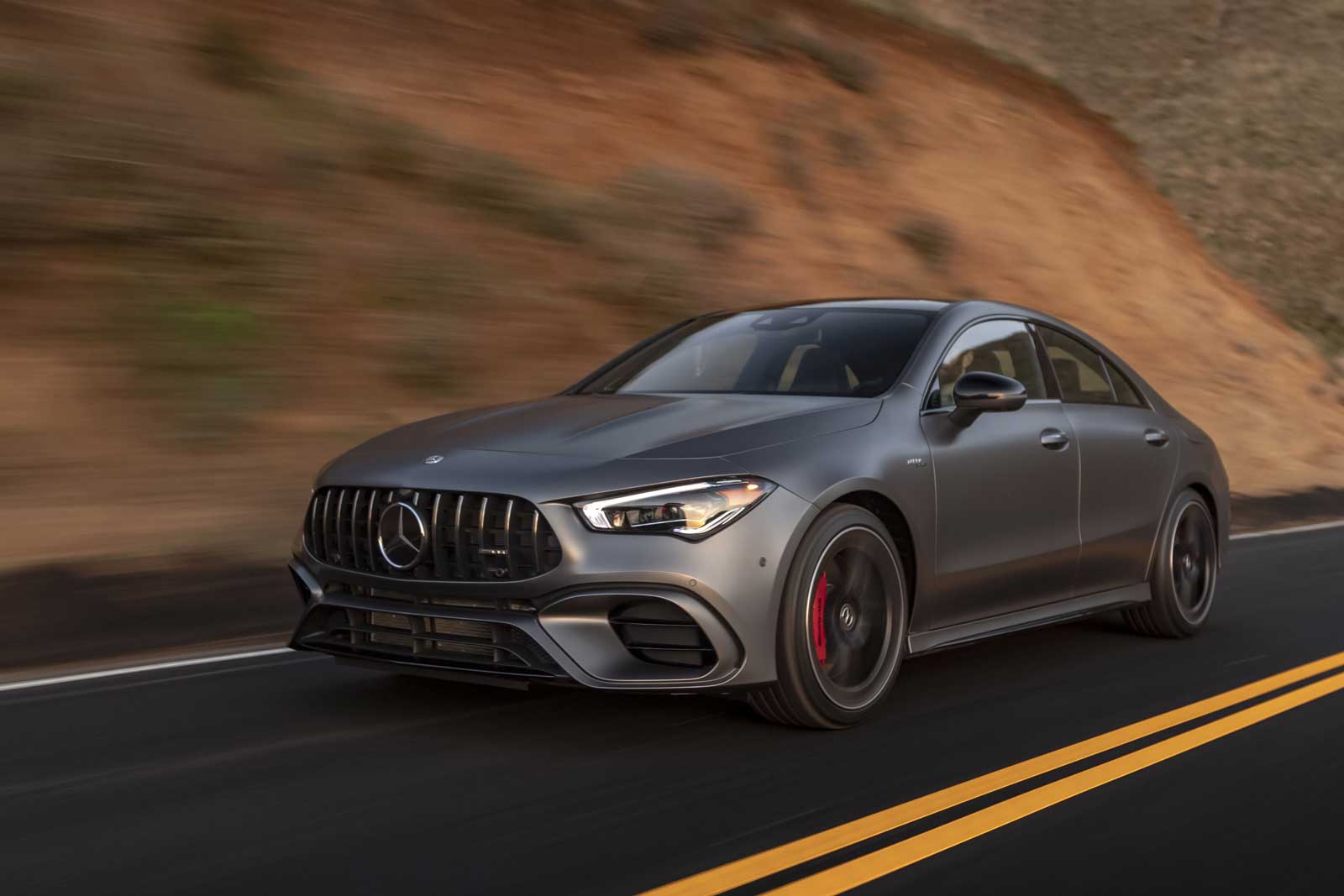 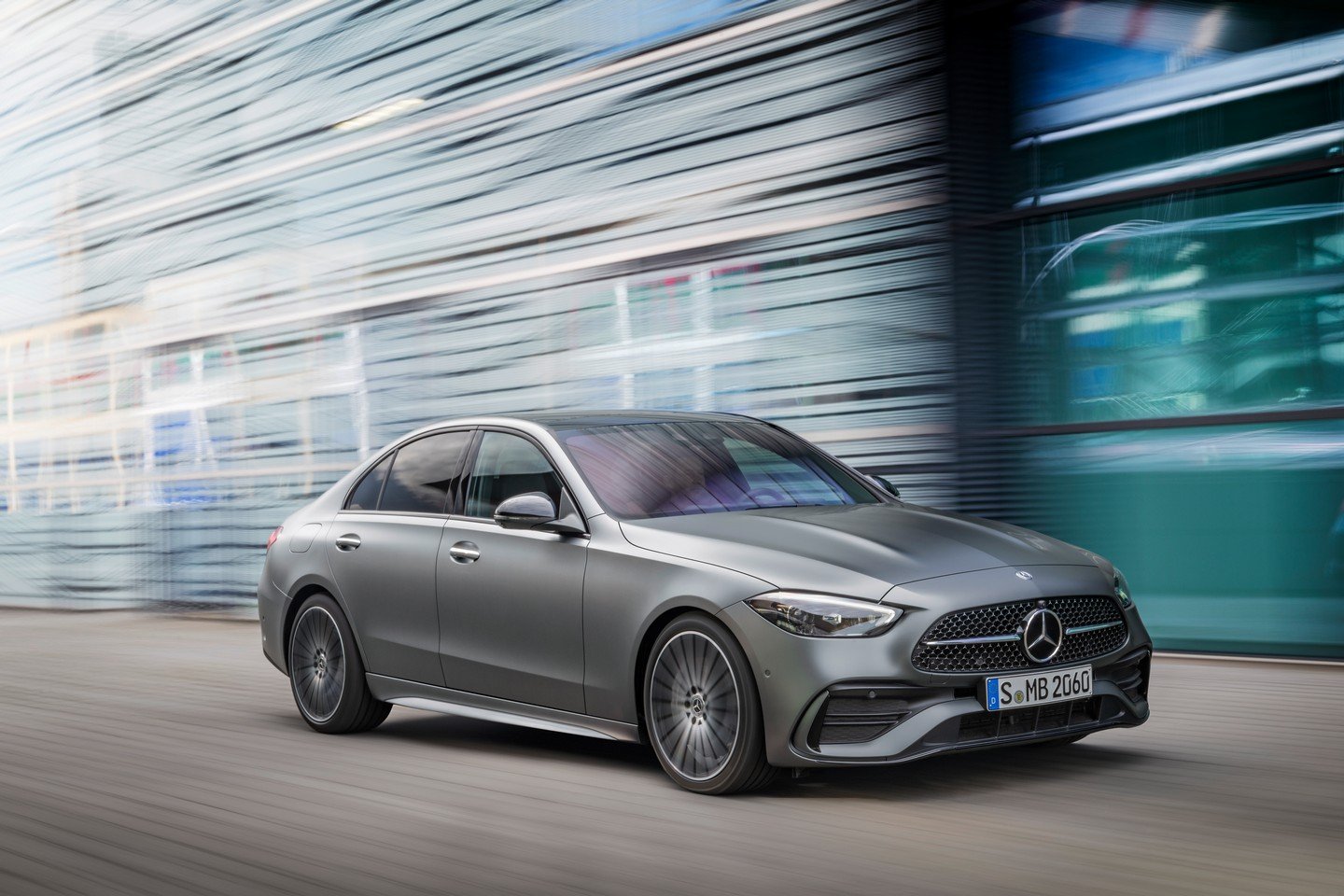 An all-new generation of the Mercedes-Benz C-Class arrives for the 2022 model year. The introductory C 300 and C 300 4MATIC are equipped with a turbocharged 2.0L inline-four with 255 horsepower as before, while torque increases from 273 to 295 pound-feet. It also gets 48V mild hybrid tech that offers a temporary boost of 20 hp and 148 pound-feet. In addition to new bodywork and a revised interior, the 2022 C-Class gets more advanced safety features, while an AMG Line with Night Package is available, bringing a darker appearance to the compact sedan. The U.S. market also gets new Premium, Exclusive and Pinnacle trim levels with incremental equipment levels. Expect other powertrains to soon follow, while the new-generation C-Class Coupe and Convertible have yet to be unveiled, and the All-Terrain wagon introduced in Europe might cross the Atlantic. 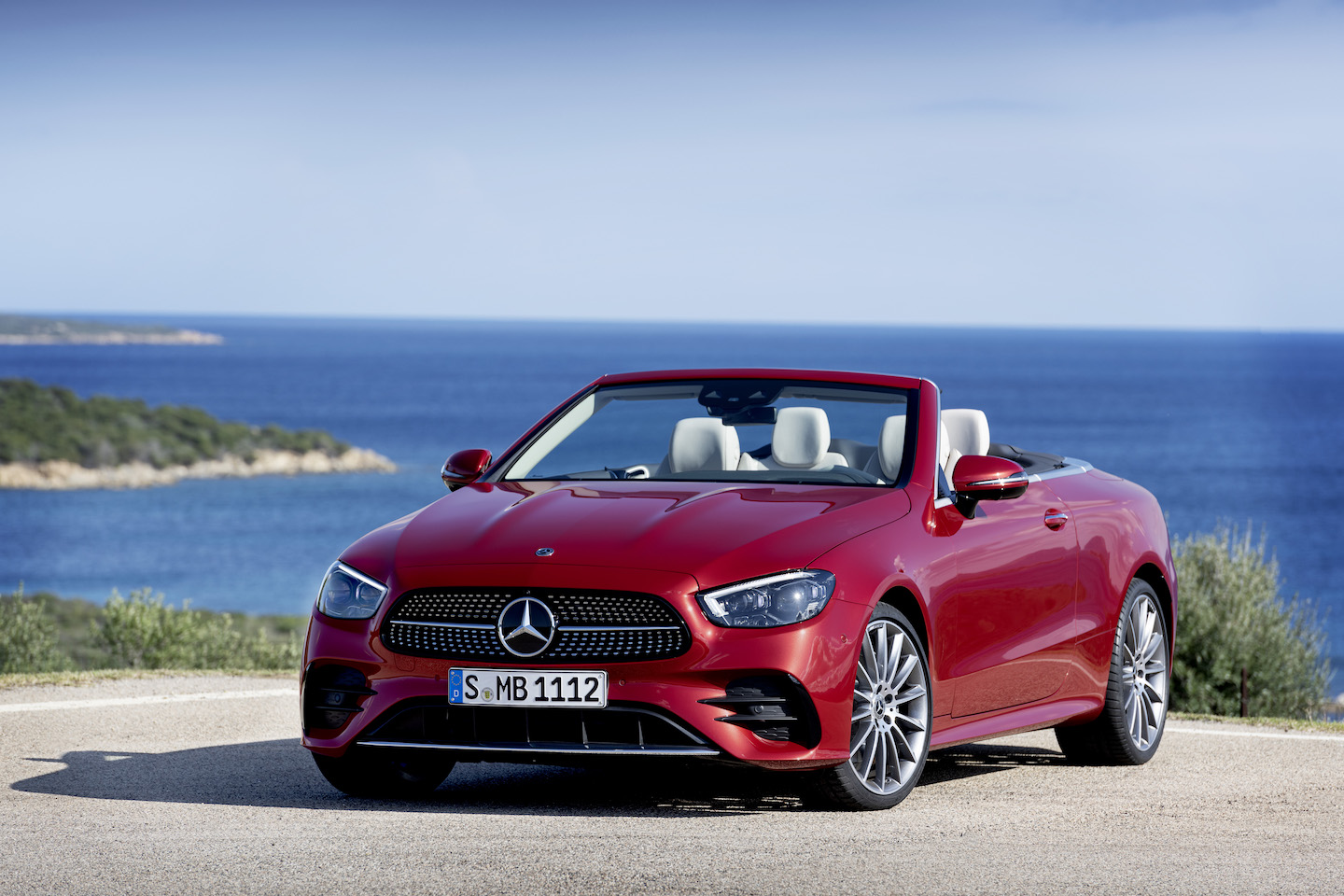 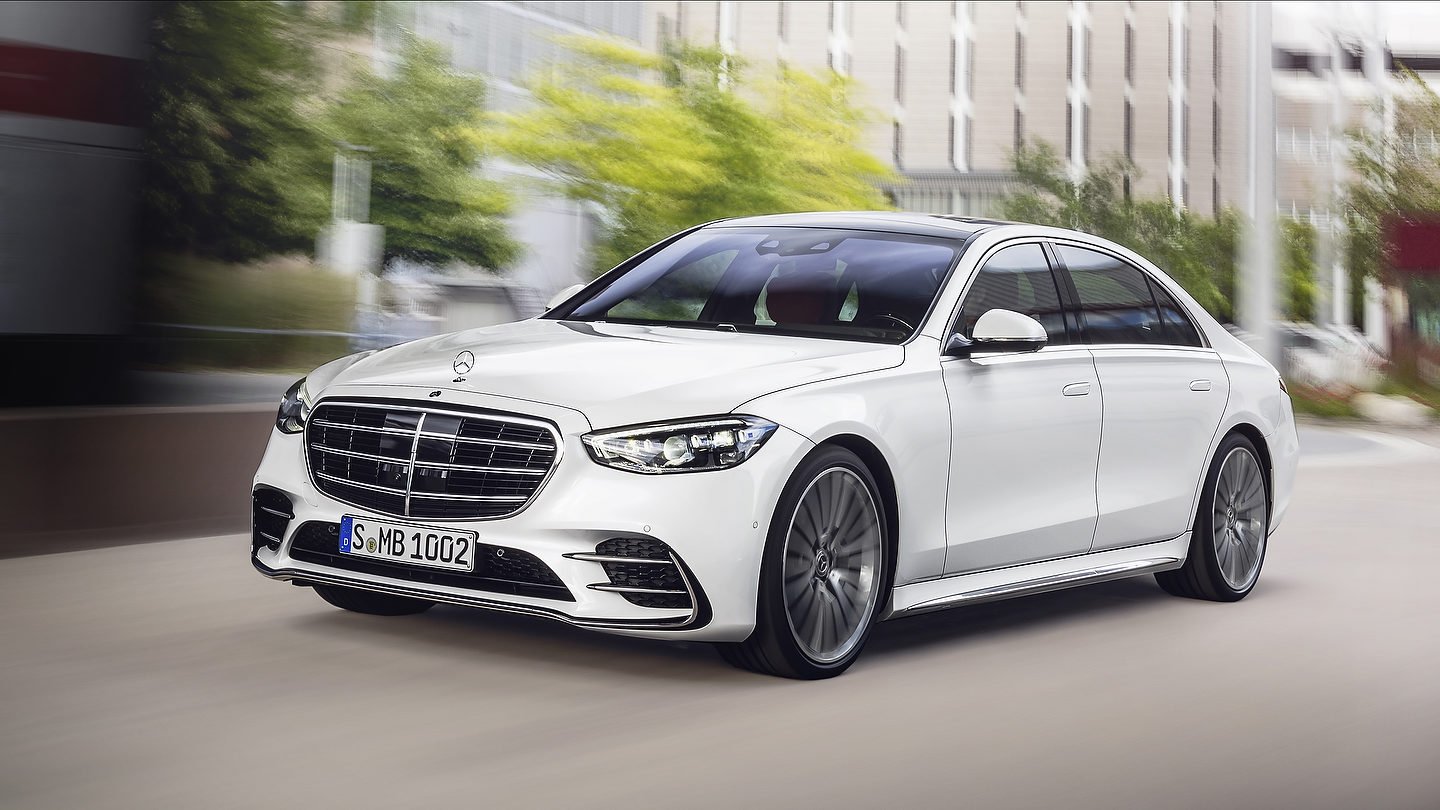 Completely redesigned for 2021, the Mercedes-Benz S-Class returns with few changes this year. Now available only as a sedan, the short-wheelbase S 500 receives a turbo 3.0L inline-six with 429 horsepower and 384 pound-feet of torque, while the long-wheelbase S 580 gets an twin-turbo 4.0L V8 good for 496 hp and 516 pound-feet. As is the case in other Benz models, these EQ Boost engines can produce extra short bursts of 21 hp and 184 pound-feet. The Mercedes-Maybach S-Class is also fairly new, available in 496-hp S 580 configuration, while a S 680 4MATIC variant with a 621-horsepower, twin-turbo 6.0L V12 will soon join the lineup. Also, a limited-run Edition 100 marking the Maybach brand’s centennial will be available in the U.S. in the first half of 2022, equipped with the V12 engine. 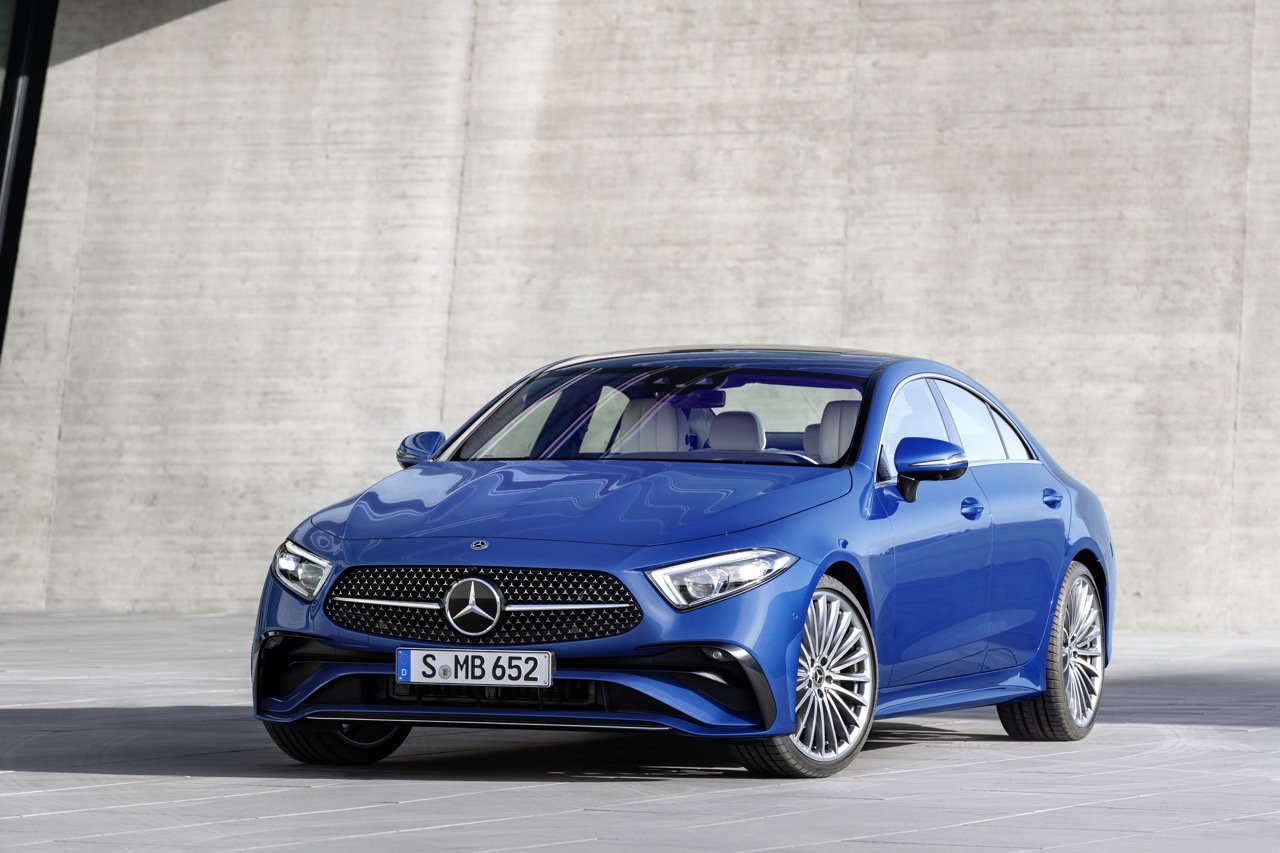 As for the Mercedes-Benz CLS, it receives a mid-cycle refresh with new front-end styling and a standard AMG Line design package, more leather and trim combinations in the cockpit, and a new-generation steering wheel. It also gets new paint colours and wheel designs. The CLS is offered in 362-hp CLS 450 and 429-hp AMG CLS 53 variants, both with 4MATIC AWD.

The Mercedes-Benz SL is all-new for 2022, ditching its power-folding hard top for a power fabric top, along with new interior and exterior styling and more technological content. Developed and sold exclusively under the Mercedes-AMG arm, the new SL is now a 2+2, initially offered with a twin-turbo 4.0L V8 engine with two output levels. The AMG SL 55 gets 469 hp and 516 pound-feet of torque, while the AMG SL 63 serves up 577 hp and 590 pound-feet. 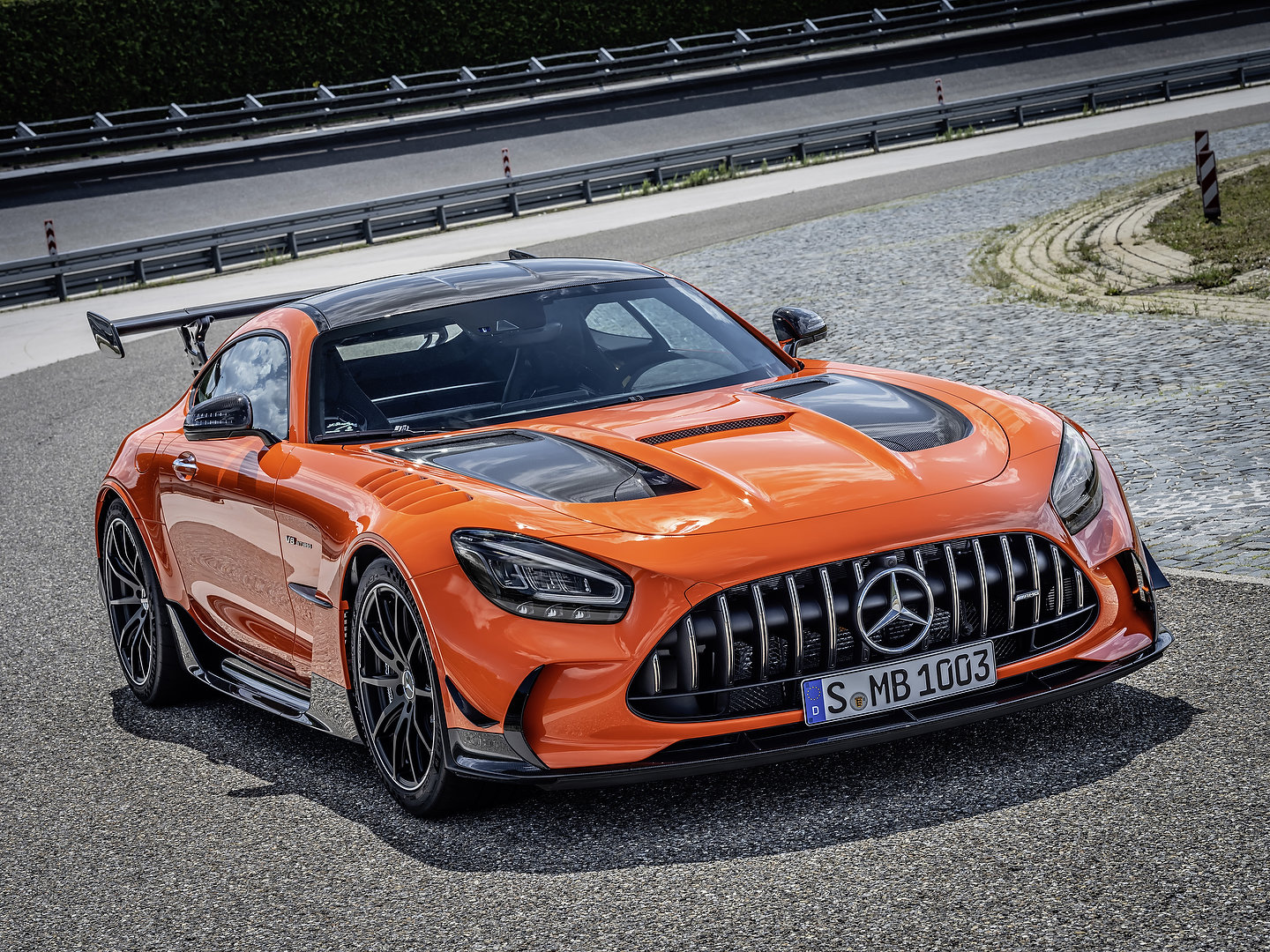 The Mercedes-AMG GT coupe and roadster are pretty much unchanged for the 2022 model year. The base GT features 523 horsepower from its twin-turbo 4.0L V8, while the GT C ups the ante to 550 hp. The beastly GT Black Series Coupe benefits from 720 horsepower and 590 pound-feet of torque and a 0-60 mph sprint estimated at 3.1 seconds. No changes for now regarding the Mercedes-AMG GT 4-Door Coupe, whose lineup includes the AMG GT 43 with a 362-hp turbo 3.0L inline-six and the AMG GT 53 with 429 hp. The newly unveiled AMG GT 63 S E PERFORMANCE will arrive in North America for the 2023 model year with a twin-turbo 4.0L V8 and an electric motor, joining hands to produce 831 horsepower and 1,033 pound-feet of torque.

As for the Mercedes-AMG ONE hypercar that was revealed back in 2017, the car’s development never seems to end. Deliveries were supposed to begin in 2021 for the 275 lucky buyers of this wild ride, which should boast over 1,000 horsepower through its F1-derived, PHEV powertrain, but they’ll have to be a little more patient as production has been pushed back to the 2022 calendar year. 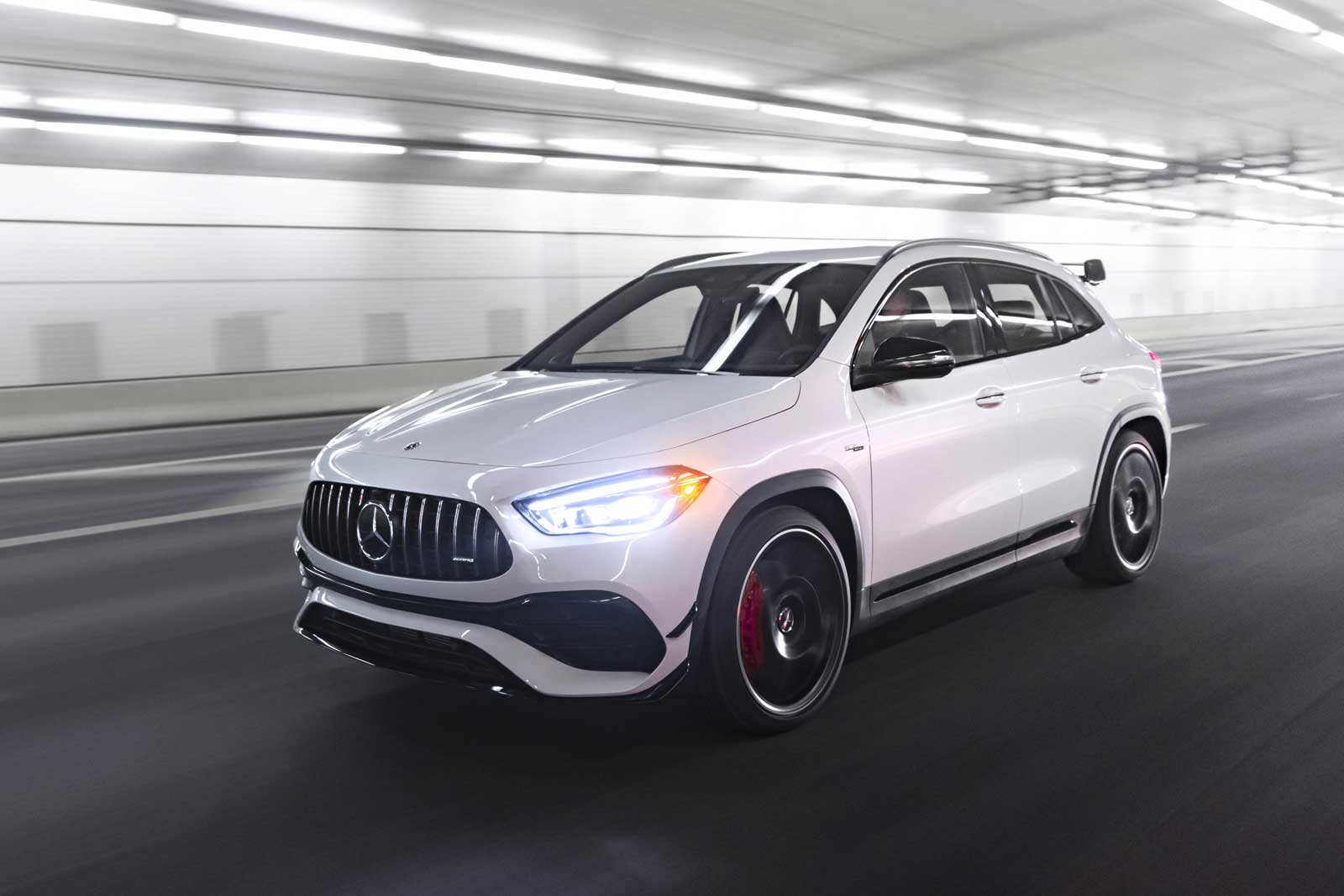 The Mercedes-Benz GLA subcompact crossover was redesigned for 2021, and no significant changes have been announced for 2022. The GLA 250 is equipped with a 221-horsepower turbo 2.0L four, while the AMG GLA 35 and AMG GLA 45 receive higher outputs with the same engine displacement, cresting at 302 and 382 hp respectively.

The Mercedes-Benz GLB is a slightly bigger subcompact model, available with three rows of seats for a capacity of up to seven passengers, and it’s offered in 221-hp GLB 250 and 302-hp AMG GLB 35 variants. It gets minor changes for 2022, having been introduced for the 2020 model year. 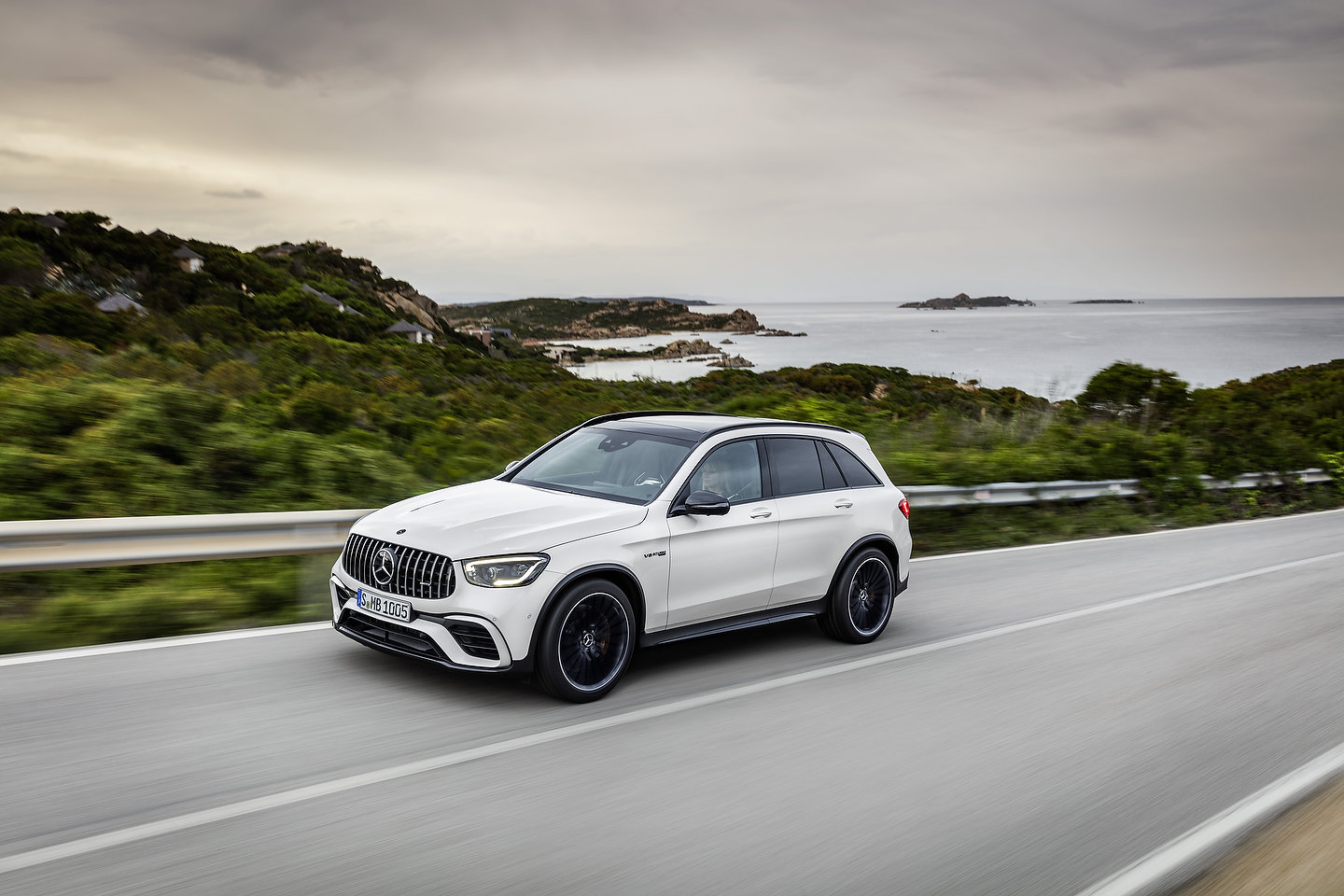 The Mercedes-Benz GLC is the company’s best-selling vehicle in both the U.S. and Canada, and returns with no significant changes in 2022. It’s available in classic SUV and GLC Coupe body styles, and powertrains include a 255-horsepower turbo 2.0L four (GLC 300), a 385-hp twin-turbo V6 (AMG GLC 43) and a twin-turbo V8 with 469 or 503 hp (AMG GLC 63 and GLC 63 S). The 315-hp plug-in hybrid GLC 350e bit the dust in North America. Actually, the GLC 63 S SUV is new for the U.S. market, as the country previously only received the GLC 63 S Coupe with the most powerful engine. However, at the moment, all V8-powered GLCs are unavailable due to the microchip shortage. 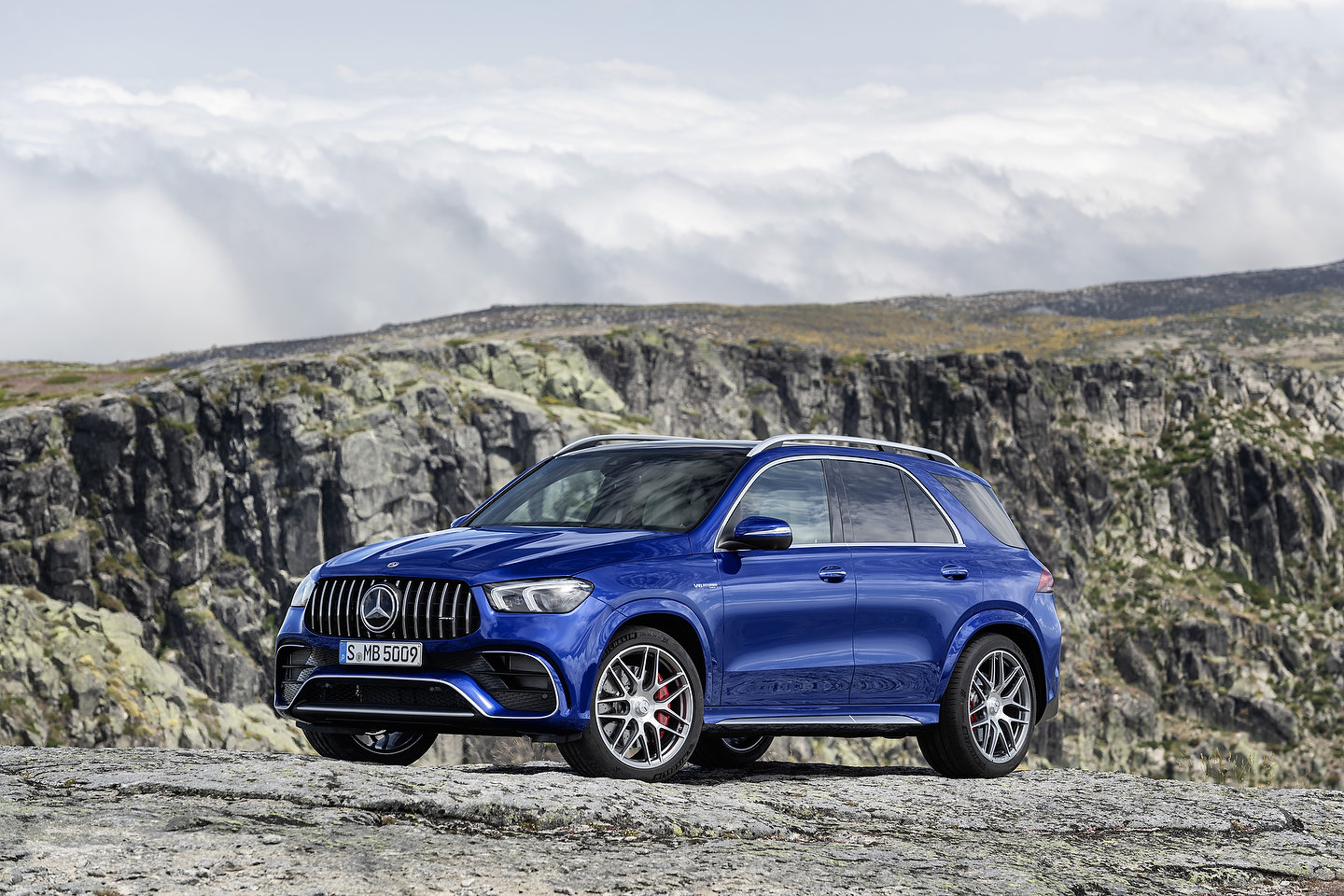 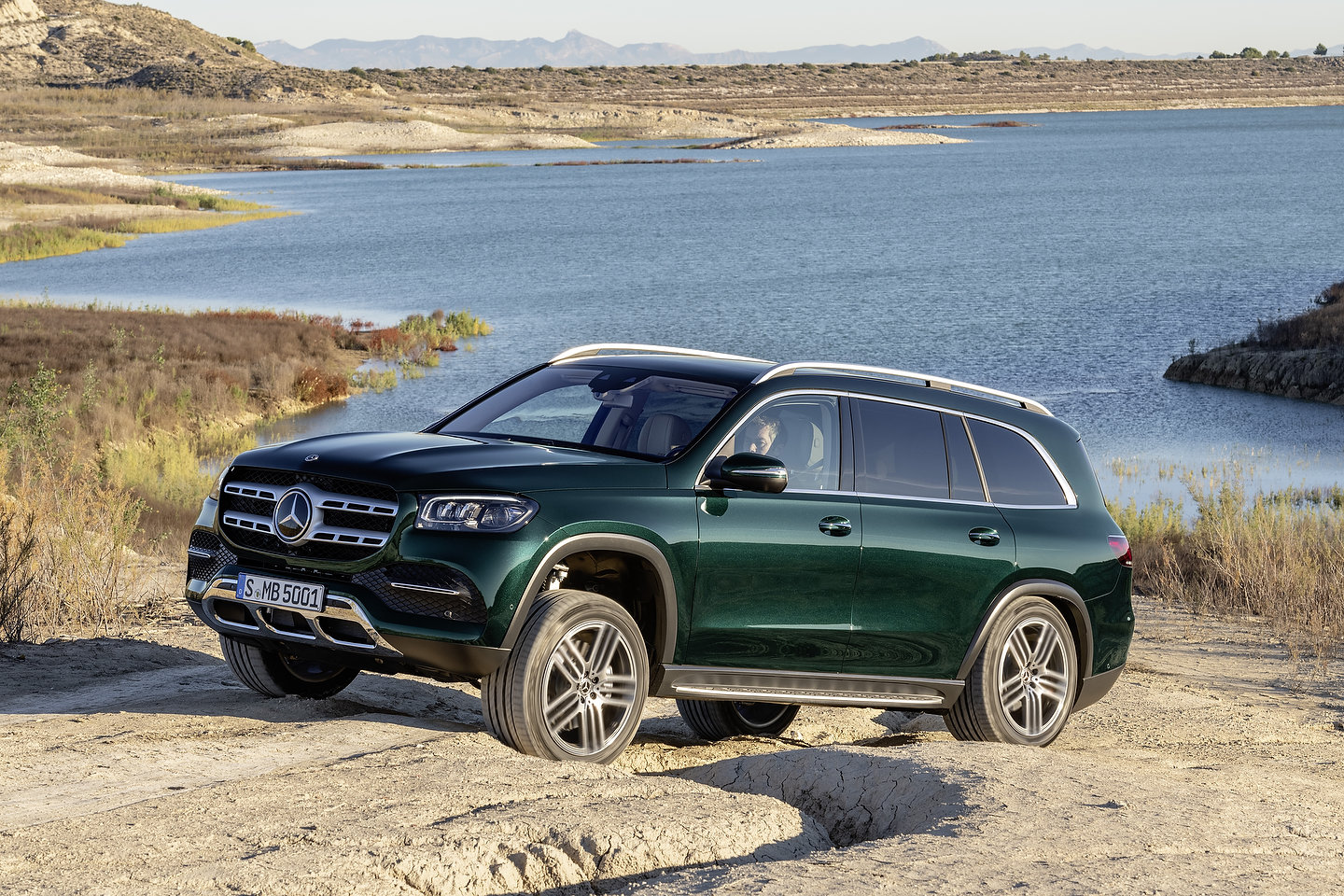 The Mercedes-Benz GLS was redesigned for 2020, so the 2022 model year won’t bring anything significant for the full-size crossover. It receives pretty much the same powertrains as the GLE, including a 362-hp six (GLS 450), a 483-hp V8 (GLS 580) and a 603-hp V8 (AMG GLS 63 S). However, the V8-powered GLS variants are currently unavailable due to the microchip shortage. The S-Class of SUVs also includes the Mercedes-Maybach GLS 600 in its lineup with an exclusive EQ Boost, twin-turbo 4.0L V8 developing 550 horsepower and 538 pound-feet of torque. 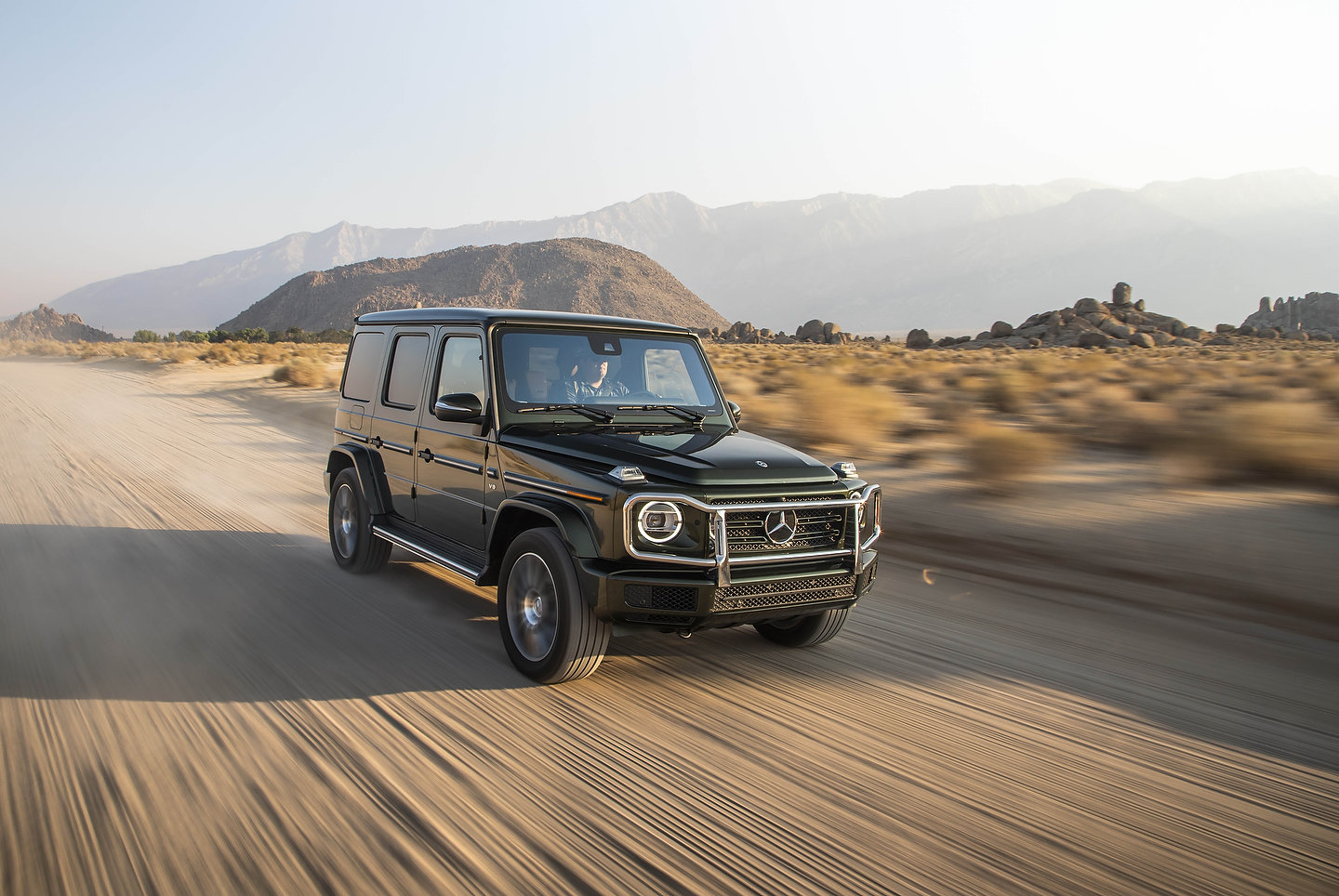 Topping the brand’s range of utility vehicles is the iconic Mercedes-Benz G-Class, which enters the 2022 model year with no noteworthy changes. In North America, it’s available with either a 416-horsepower, twin-turbo V8 (G 550) or a 577-hp V8 (AMG G 63). The microchip shortage pretty much eliminated 2022MY production of the G-Class, but it might return to the market during the year as the situation improves for the German manufacturer. 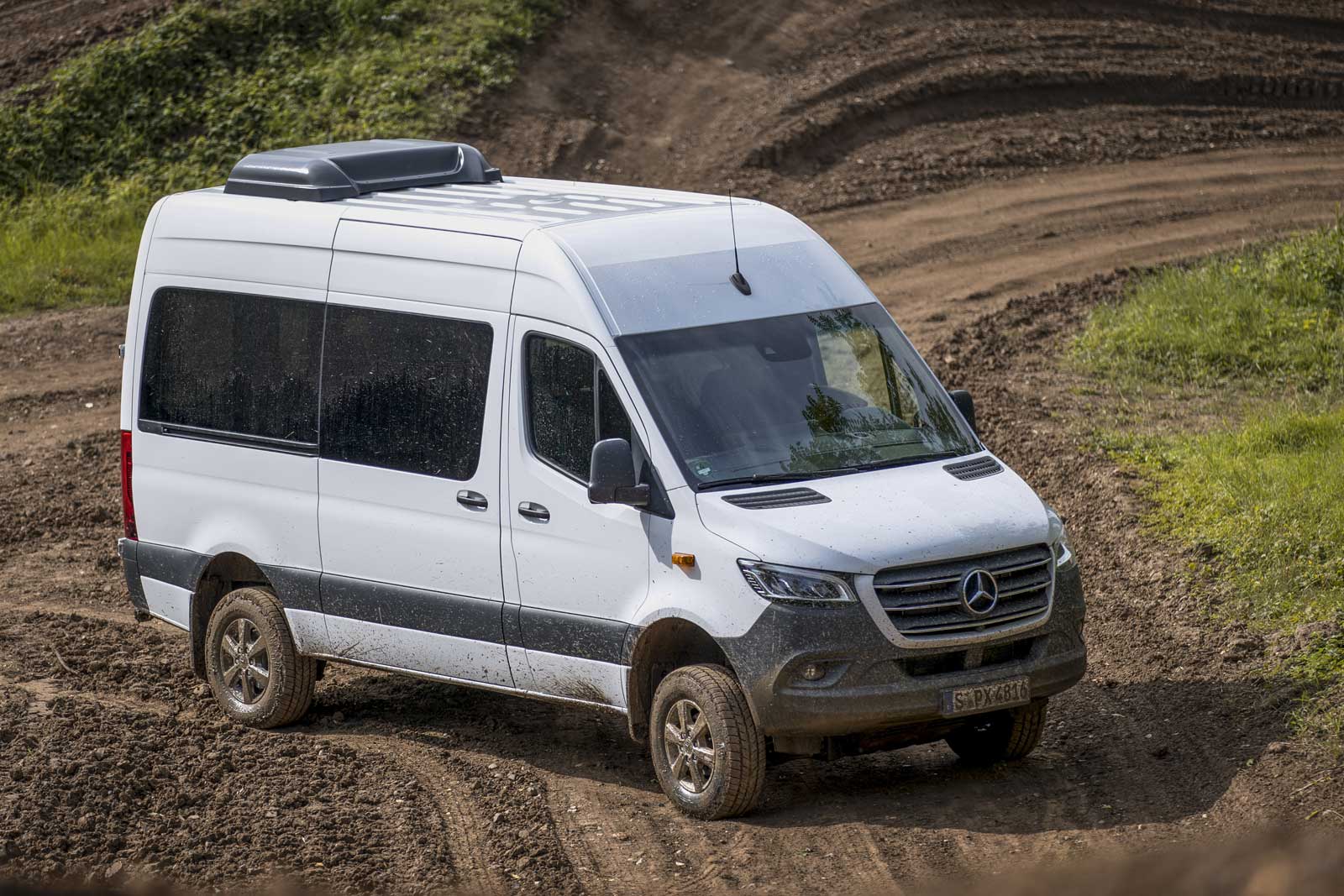 Finally, the Mercedes-Benz Sprinter gets a new engine, a new transmission and a new AWD system. The turbocharged 2.0L inline-four offers four output levels globally, although the North American market should get only the 190-horsepower variant. Diesel inline-four and V6 engines continue to be available as well, and are now matched to a nine-speed automatic transmission, replacing the old seven-speed unit. The previous AWD system needed to be engaged and offered a 35/65 front/rear torque split, while the new AWD varies the torque split on its own, in addition to enhancing handling and being quieter. A Speed Delivery Door is available on the passenger side of the Sprinter, which uses sensors to automatically open and close while the driver delivers his or her packages. The fully electric Mercedes-Benz eSprinter has been introduced, and will head to the U.S. and Canada sometime in 2023. 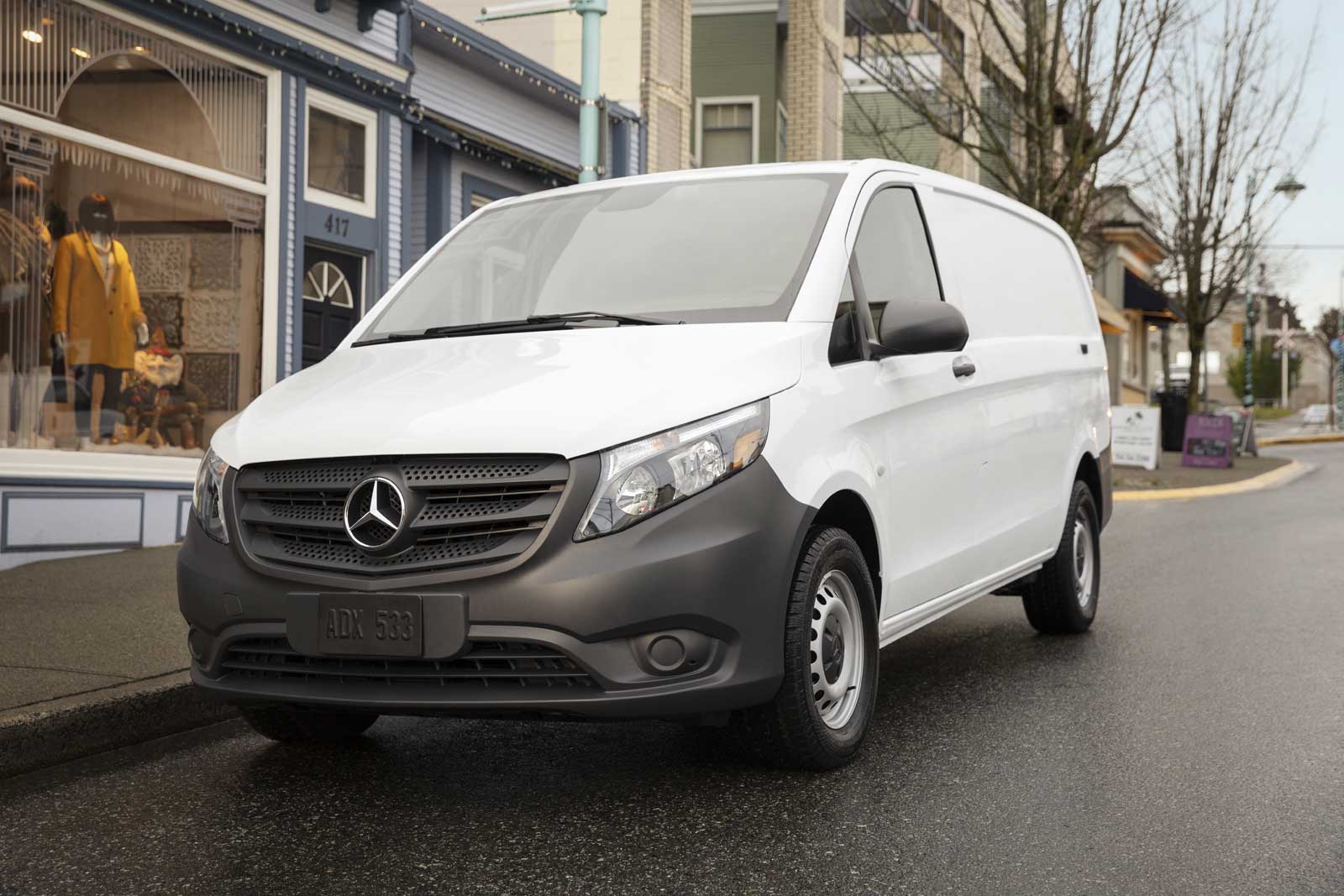 The Mercedes-Benz Metris van gets no changes for 2022. It’s still available in Cargo and Passenger configurations, equipped with a turbocharged 2.0L inline-four that develops 208 horsepower. The Mercedes-Benz EQV—the Metris is called the V-Class in Europe—has also been launched, but it’s currently unconfirmed for North America.

The Ford F-Series pickup is tops among the most popular cars in Canada. The Toyota Corolla topples the Honda Civic and becomes the...
Read more
Previous articleHyundai 2022 Lineup: Models And Changes Overview
Next article2022 Subaru Ascent vs 2021 Volkswagen Atlas Comparison