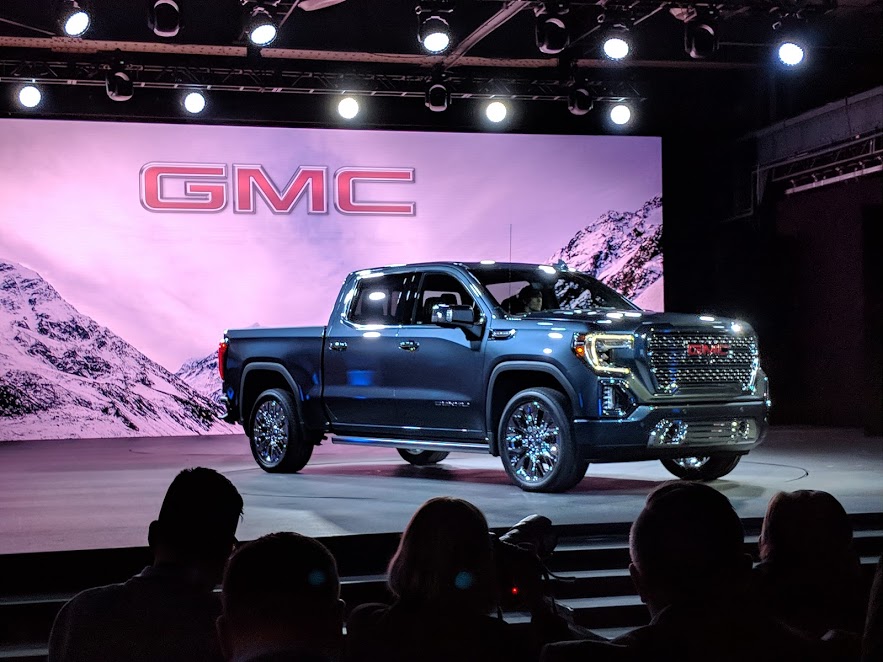 After presenting its new Chevrolet Silverado in January, General Motors followed logically by introducing its brother yesterday, the all-new GMC Sierra 2019. Unveiled at a special event in a Detroit-area abandoned warehouse that suits a truck presentation very well, the new-generation Sierra offers several new features, but its vocation will be the same.

It will continue to offer truck buyers a little more luxury and refinement than the Silverado, and a little more exclusivity as well. At least that’s what GMC believes, which sees itself as a higher-end alternative to the Chevrolet products with which it shares its lineup.

A unique tailgate for the GMC Sierra 2019

There are several new features on the new 2019 GMC Sierra, but the main attraction is probably the new Multipro Tailgate. This unique tailgate has several features that make it easier to reach objects in the box, extend the box, and climb more easily inside the bed with an integrated step that can support 375 pounds. It can also prevent objects from moving around thanks to a built-in load stop and even serve as work shelf.

Another interesting element of the box is the carbon fiber option offered in the Denali version. This is a first for a full-size pickup truck and although we wonder if it is relevant, there is no doubt that it will have your neighbors talking. In simple terms, it’s possible to add a carbon fiber liner to the 2019 Sierra Denali’s box.

This option has certain qualities. Firstly, it reduces the weight by up to 30 kilograms. Secondly, it offers what GMC promises to be unparalleled resistance to scratches and damage. A built-in 110-volt plug and best-in-class volume through the various box sizes are also noteworthy selling points for the new Sierra.

The 2019 GMC Sierra will be the only pickup truck in its segment to feature a full-color head-up display, while an app called ProGrade will make hitching easier. This feature includes a checklist to follow before attaching a trailer and a feature that allows you to zoom in on the trailer hitch when you are trying to attach something to it.

It will also be possible to opt for a camera designed for towing to make life even easier for you. Another technology will allow the owner to adjust trailer braking depending on what we are towing. Under its massive hood, the GMC Sierra will feature the 5.3 and 6.2-liter V8s that it shares with the Silverado while a diesel option (a 3.0-liter six-cylinder turbodiesel) will also be offered.

The 2019 GMC Sierra will go on sale this fall. The price has not been announced yet.

I have to say, I’m not a truck guy per se. That said, if I had to buy a truck, it would probably be the Sierra. It seems to be able to tow anything it wants to tow and it just looks good. It also looks like you know something others don’t when you are in a Sierra. Maybe that’s just me.

All I know is that GMC did a very good job with introducing new technologies that are actually useful and wanted, and that will make life easier for those who use their trucks for their intended purpose. And for those who don’t but like the idea that a truck represents, the 2019 GMC Sierra will continue to offer what the previous-generation did: class-leading comfort and a fairly high-end cabin. In the Denali, remove the “fairly”.

Jaguar will become fully electric in the next few years. We will get more information on the brand's future in 2023. The first...
Read more
Previous articleReview: 2018 Audi RS 3
Next articleThe Mazda rotary range extender