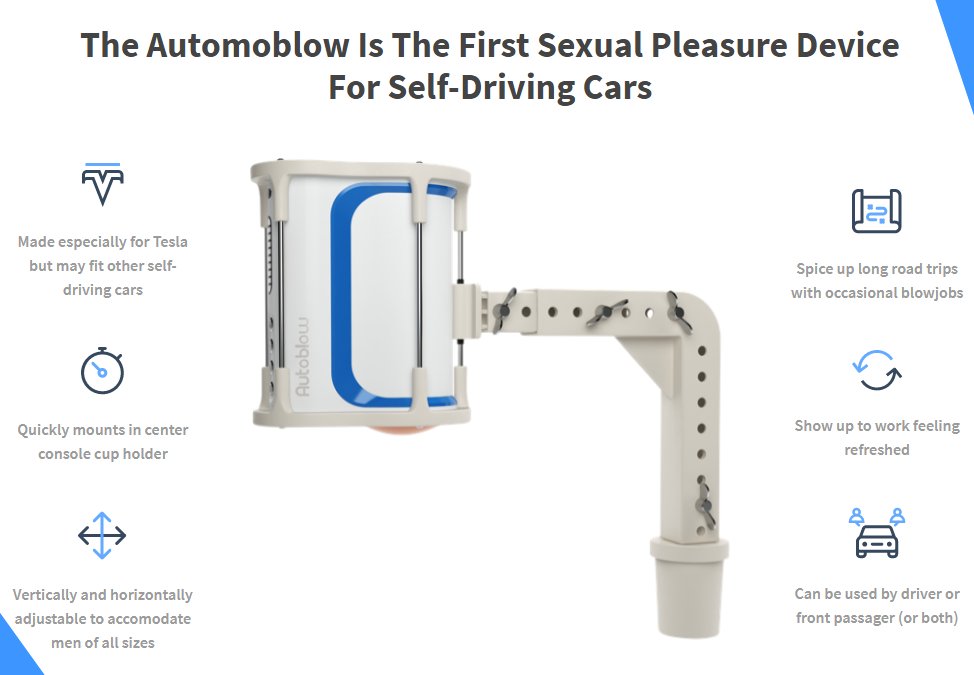 So, two years ago a product called the Autoblow was released with the purpose of simulating oral sex. Today, the company behind the cringy invention released the Automoblow.

Hailed as “the first sexual device for self-driving cars”, the Automoblow is designed specifically for Tesla vehicles with Autopilot.

The contraption connects to the cupholder with a large arm and apparently comes with plenty of vertical and horizontal adjustments. There’s a video of the thing in action. Use Google, we’re not putting that here.

We looked for any sign that this was a joke. We looked and looked, but the Automoblow is apparently a real extension of a self pleasuring machine that actually exists.

Tesla has to sue, right? No way they agreed to be involved in this.

And speaking of lawsuits, what happens when your Autopilot detects a Honda Accord cutting into your lane and slams on the brakes while your Automoblow is on high?

Seems to me that the last thing you want when you’re one bad driver away from violently shifting position is to have your genitals caught in a fixed plastic tube.

And what happens if the upcoming Hummer EV has self-driving capabilities?

In all seriousness, however, there is one element here that bugs us about this thing and that’s that it is marketed for “self-driving” cars when in actuality there are no fully autonomous cars yet.

The Autopilot is a Level 2 system that requires the driver to remain focused at all times. If there was ever something capable of distracting you behind the wheel, this would be it.

This is just too weird so I think we’ll call it a day.