More 911, Panamera and Cayenne variants to choose from.

As the world’s automakers are shifting their focused on electric vehicles, some brands’ future strategy is already in motion. Among those is Porsche.

After launching two body styles of its first modern EV, the German purveyor of sports cars and performance luxury utility vehicles has kept busy expanding its existing model lines in order to remain competitive with its local adversaries. Here’s what to expect from the Porsche brand in 2022.

Slowly but surely, the Porsche Taycan lineup has grown into nine variations in Canada and ten in the United States, with the arrival of the wagon-esque Cross Turismo. The sedan is available in base (U.S. only), 4S, GTS, Turbo and Turbo S trims, while the Cross Turismo gets 4, 4S, GTS, Turbo and Turbo S. Output ranges from 402 to 750 horsepower, while driving range varies between 320 and 365 kilometres or 199 and 227 miles on a full charge, thanks to one of two battery sizes—79.2 kWh (71.0 usable) and 93.4 kWh (83.7 usable). The Taycan GTS sedan and Sport Turismo are the latest additions to the lineup with 590 horsepower, a specifically tuned suspension, unique interior and exterior styling cues, and “Porsche Electric Sport Sound.” The Taycan just received an updated infotainment system.

The iconic Porsche 911 lineup has expanded from 15 to 22 variants, the latest being the 911 Porsche Design 50th Anniversary Edition. Only 750 units will be produced, all based on the Targa body style, all painted black and all dressed up in checked Sport-Tex seat upholstery. It’s equipped with the 911 GTS’ twin-turbo 3.0L flat-six that develops 473 horsepower and 420 pound-feet of torque. The GT3 and GT3 with Touring Package are also new, flaunting their naturally aspirated 4.0L flat-six that belts out 502 hp. Other powertrains across the Carrera, S, 4, 4S, GTS, Turbo and Turbo S produce between 379 and 640 horsepower. No significant changes have been announced for the 2022 model year to the already existing lineup of coupes, convertibles and targas. 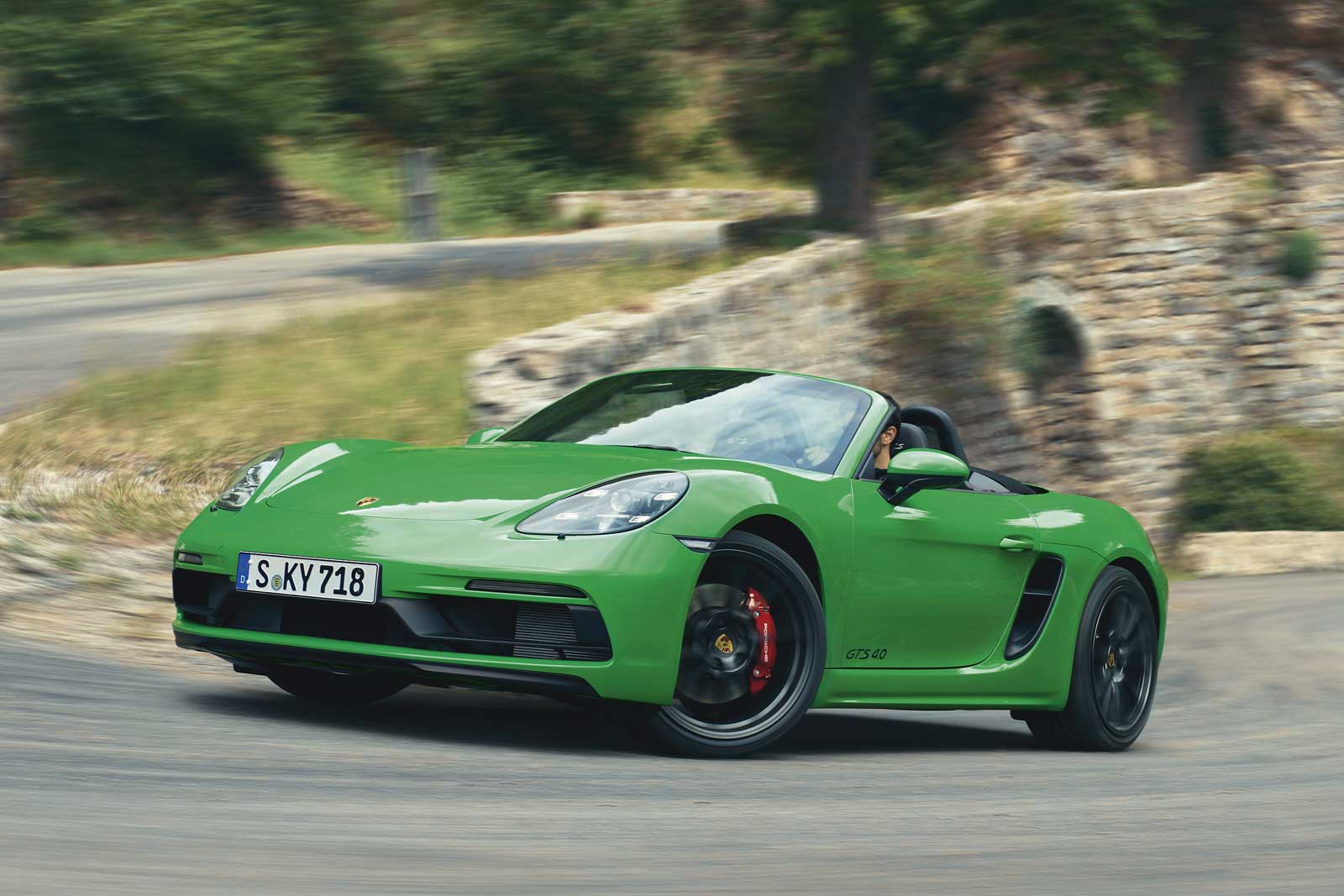 Two more variants of the Porsche 718 have recently been added for a total of 12, mixed between the 718 Cayman coupe and the 718 Boxster roadster. The Boxster 25 Years edition celebrates the nameplate’s quarter century on the market, with unique interior and exterior trim and a naturally aspirated 4.0L six with 394 horsepower—same as in the GTS 4.0 edition. Base and T trims get s turbo 2.0L flat-four with 300 hp, the S trims get a 2.5L engine with 350 hp, and the range-topping 718 Cayman GT4 and 718 Spyder get the 4.0L engine, but with 414 horsepower. The other new model in the lineup is the track-focused 718 Cayman GT4 RS, which also features the naturally aspirated 4.0L six, retuned to 493 horsepower and 332 pound-feet of torque.

The Porsche Panamera fastback sedan and its Sport Turismo wagon-esque counterpart receive only minor changes for 2022. Between the two body styles, rear- and all-wheel drivetrains, wheelbases and engines, there are no less than 24 configurations of the nameplate on offer—three more than last year. The Panamera Platinum Edition, available with base, 4 and 4 E-Hybrid powertrains, is qualified as “a particularly elegant and exclusive version of the Panamera” with satin gloss trim as well as more features for a reasonable price. The base engine is a twin-turbo 2.9L V6 with 325 horsepower, while a 443-hp version of the same engine is found in the 4S variants. The Panamera 4 E-Hybrid boasts a combined output of 455 hp, while the 4S E-Hybrid gets 552 hp. The GTS and Turbo S editions are equipped with a twin-turbo 4.0L V8 good for 473 and 620 hp, respectively. The range-topping Turbo S E-Hybrid editions rip the pavement with 689 horsepower and a 0-60 time of about three seconds.

The Porsche Macan gets a refresh for 2022, with styling enhancements, new paint colors, more muscular powertrains, revised suspensions and a refurbished interior with more modern switchgear and 10.9-inch infotainment touchscreen. The base Macan features a turbo 2.0L four with 261 horsepower (up from 248), while the S gets last year’s GTS twin-turbo 2.9L V6 developing 375 horses (up from 348). The Macan Turbo is gone, at least for now, but handed over its 434-hp twin-turbo 2.9L V6 to the new GTS. The Porsche Macan T is all-new as a stripped-down variant focused on the driving experience, equipped with the 261-hp 2.0L engine. The next-generation Macan will get a fully electric powertrain.

The Porsche Cayenne in regular and Coupé body styles get mild changes for the 2022 model year. However, there are now 19 variants to choose from, up from the 12 offered in 2021. The Cayenne Platinum is new, with unique styling cues and more features for the price, available with one of three engine choices. The powertrain lineup consists of the 335-hp turbo 3.0L V6 in the base Cayenne, the 455-hp setup that uses the 3.0L V6 in the E-Hybrid, the 434-hp twin-turbo 2.9L V6 in the Cayenne S, the twin-turbo 4.0L V8 that respectively develops 453 and 541 hp in the GTS and Turbo editions, along with the V8-powered, 670-hp plug-in hybrid system in the Cayenne Turbo S E-Hybrid. Also new is the Cayenne Turbo GT, an even sportier version of the Coupé with the 361-hp version of the twin-turbo V8.