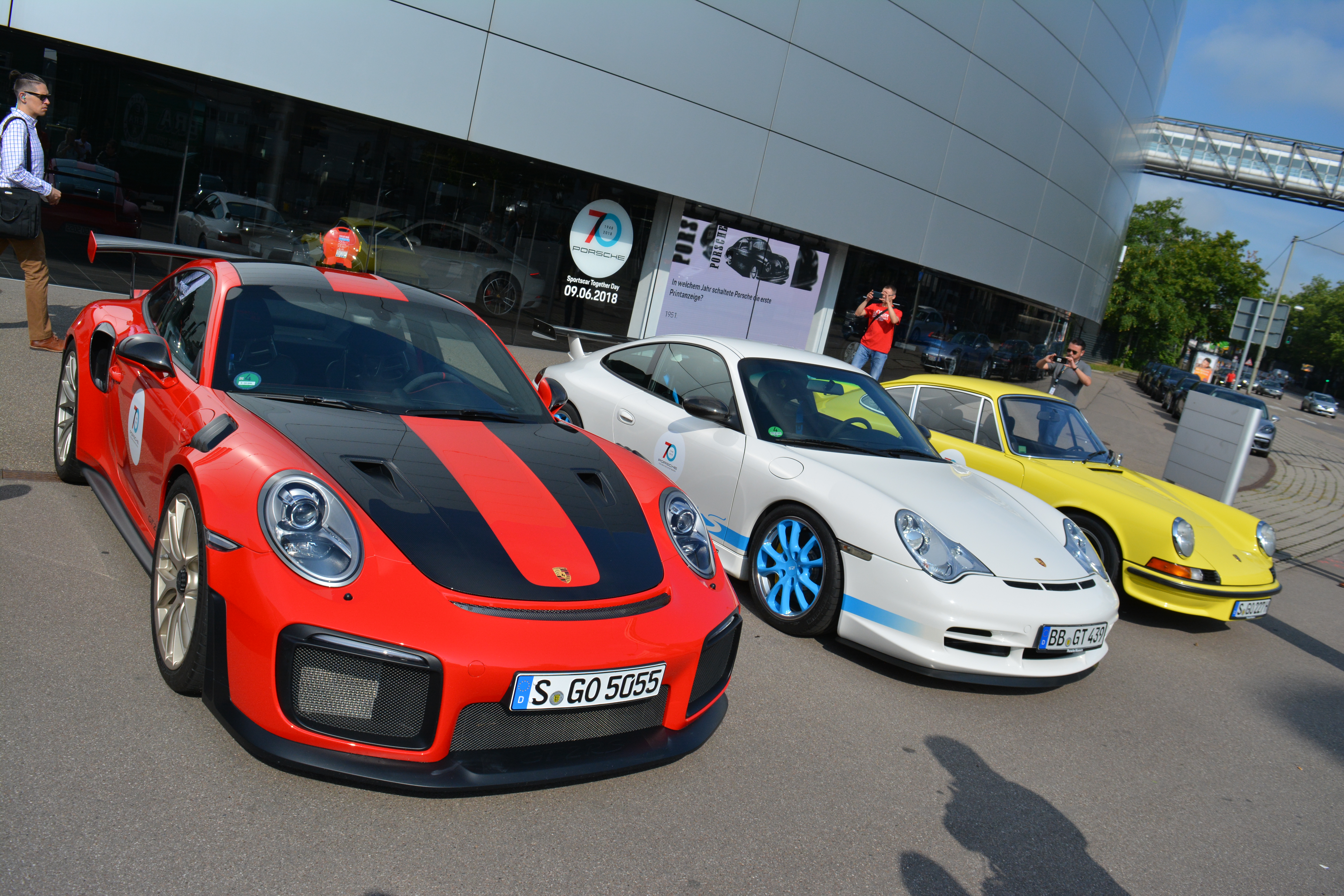 Stuttgart, Germany. This year, 2018, is a big year for Porsche. They are celebrating 70 years of making some, if not the, best sports cars in the world. There’s no need to argue, seriously. Nearly all carmakers have a halo sports car in their lineup or history but very few managed to survive, if only barely, on a single sports car as their sole offering. That car is the 911 and it could be argued that it stands as the most influential and desirable performance automobile in the world.

The reason why this is, is rooted in the fact that the 911 spans multiple universes, from the almost attainable dream to unobtanium to the highest degree. As a new car, no Ferrari, Lamborghini and Aston Martin can match the 911. The closest any manufacturer has come to the 911 is Chevrolet with their equally storied Corvette. However, no regular 1973 Corvette is worth over $100,000 today. At $10,000 new in ’73, the 911 was 2 ½ time cheaper than a Ferrari 365 GTB/4 Daytona, which is now worth a cool million easy.

Despite the Vette’s racing history and pedigree, the 911’s past and present have almost become mystical. And Porsche, then and now, have managed to capitalize on the car’s aura and extremely rudimentary origins over and over again. They never leave the past behind; they in fact incorporate it in the present at every opportunity. The 911 is more or less a living ghost of the past, more in tune with the present and the human soul than any other car on the road today. Is this making any sense?

About the 70-year party, I was lucky enough to be invited to Stuttgart for the event. The evening’s presentation at the Porsche Museum was incredible, to say the least, but it’s what I did earlier in the day that further stirred my soul. Lined-up in front of the Porsche dealership in Zuffenhausen, across the street from the Museum and the factory, were 911s. Many, many 911s, from the 70s to today, millions of dollars of 911, were at our disposal. I was understandably excited, so I deiced to start my day slowly.

They say starting at the top is not always the best course of action, so I slipped into a brand new 2018 GT2 RS. I know how stupid that sounds but the fact of the matter is that the 700-horsepower twin-turbo engine’d 911 is a weapon of mass pavement annihilation. The 7-speed PDK transmission and space shuttle-like amount of technology onboard make going fast almost easy. I keep telling everyone that asks about the GT2 RS that it’s so fast that at one point, sprinting from 70 km/h to over 210 km/h onto the Autobahn happened so quickly, I think I went back in time. 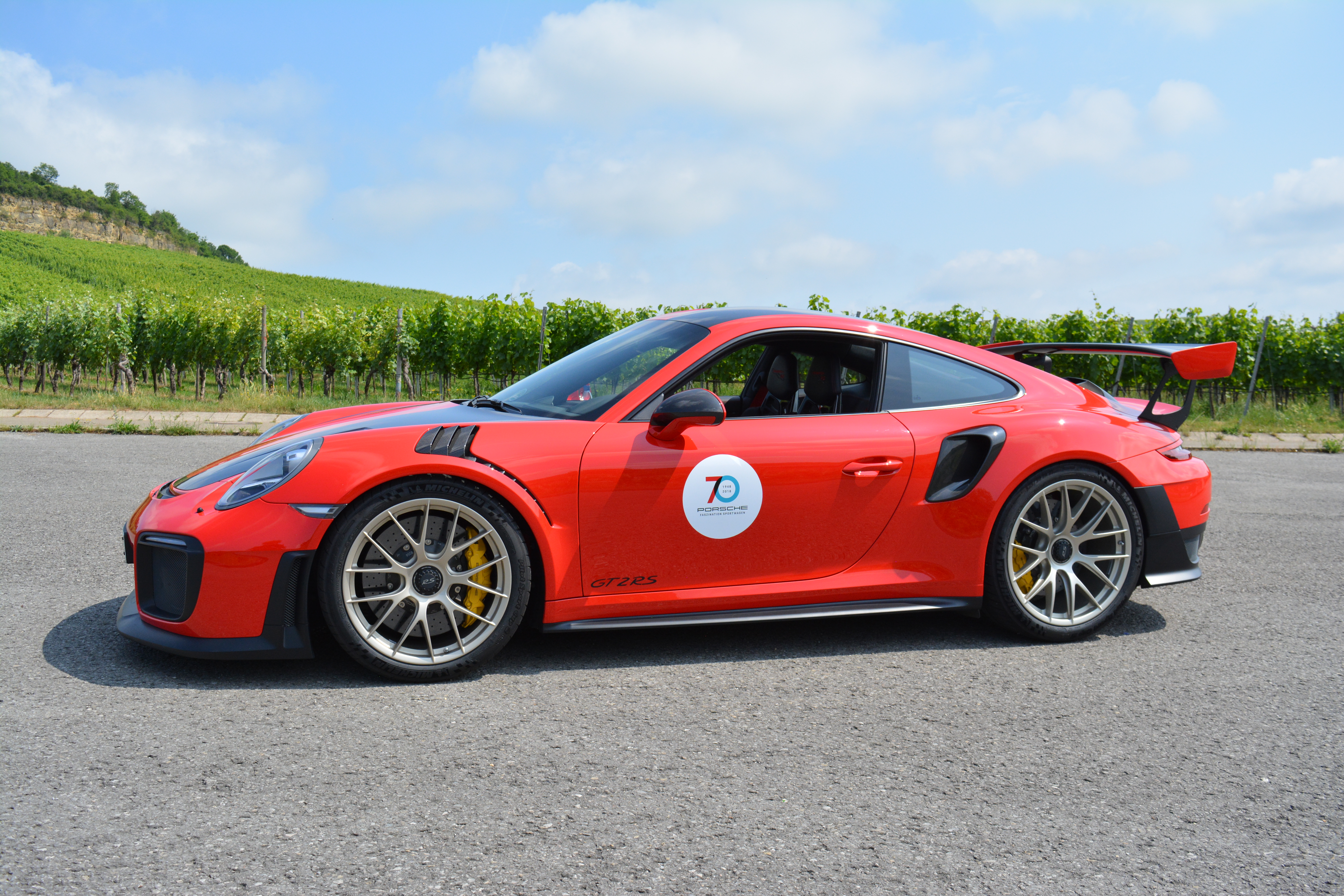 The amount of power this car has matches the McLaren 720S except that the GT2 feels more refined – I know, I can’t believe it either. I was unable to top 260 km/h on the Autobahn because of traffic and road construction. Like the 720S, what impresses is how effortless the car is to drive even about town. Unlike the McLaren, the 911 GT2 RS is less intimidating so it’s even easier to tame, if such a thing was possible. This demonstrates Porsche’s incredible ability to tune a car for maximum usability. And keep in mind, this is a hyper-focused supercar-killing track machine intended to destroy.

The tragedy lies in the fact that even when driven at 5/10 by almost anyone, the car makes the driver, pushing his or her limit likely close to 9/10, feel like a total hero. It takes a real hero to push the GT2 RS to its limits and that’ll only happen on a race track. Honestly, and I might get booed off stage for this but, although I was enjoying the GT2 RS, I only really had eyes for the vintage stuff.

This is the 911 that I was most curious about. The 964 generation 911, along with the 993, were produced in relatively small numbers (along with the 1st generation 911) compared to the G Series and subsequent 996 and on cars. It’s also the iteration of the 911 I first fell in love with when I was about 12 years old. 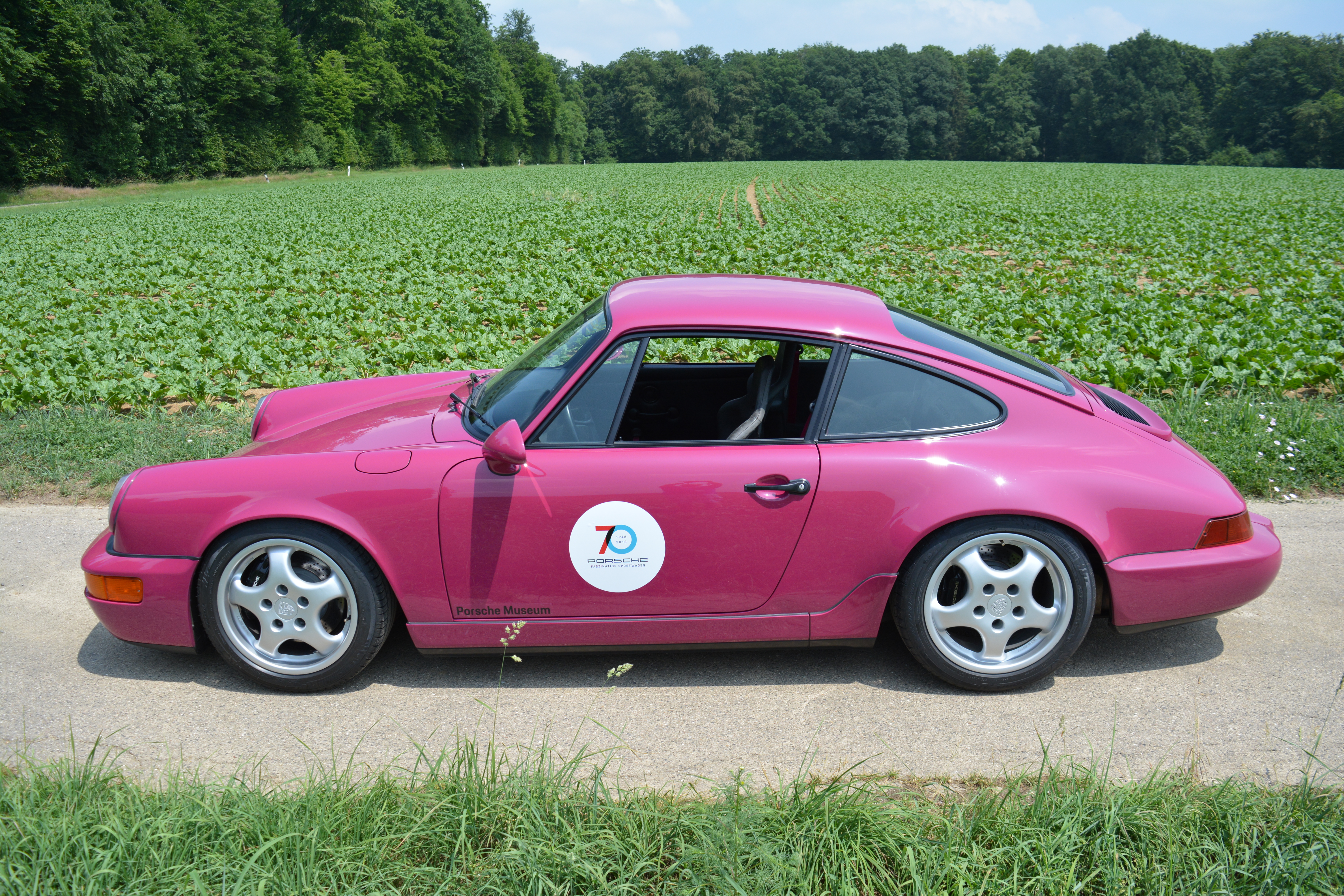 At the first opportunity, I grabbed the Rubystone red 964 Carrera RS and promptly went for a spin in the countryside. Immediately, I was made very aware that this car required a firm hand to keep it on the straight and narrow. The powerless-steering and tramlining front end insisted I be alert especially as its 260-horsepower flat-6 built some serious speed as the revs rose. The noises and smells took over my being as my foot stayed against the firewall as long as I possibly dared.

Some of the roads were less than smooth and the standard stiffer and lowered suspension shook me good, in a very good way. The experience reminded me how speed is something that is supposed to be earned, not so easily handed over because of money. The brakes were impressive and enabled me to push the car more than I first thought I would. This too was a purpose-built street-legal race car and I now more than ever appreciate and understand why these cars fetch so much money.

The next car turned out to be an unexpected surprise and was in stark contrast with the 964. I was assuming the 1973 911 Carrera 2.7 RS would put me through the ringer like the Carrera RS did, but this was not the case. By comparison, the 2.7 RS was cosseting and comfortable. Remember, not only did this car reintroduce the Carrera name but was a homologation car so that Porsche could participate in races. I anticipated noises, rattles, a rough ride and power. 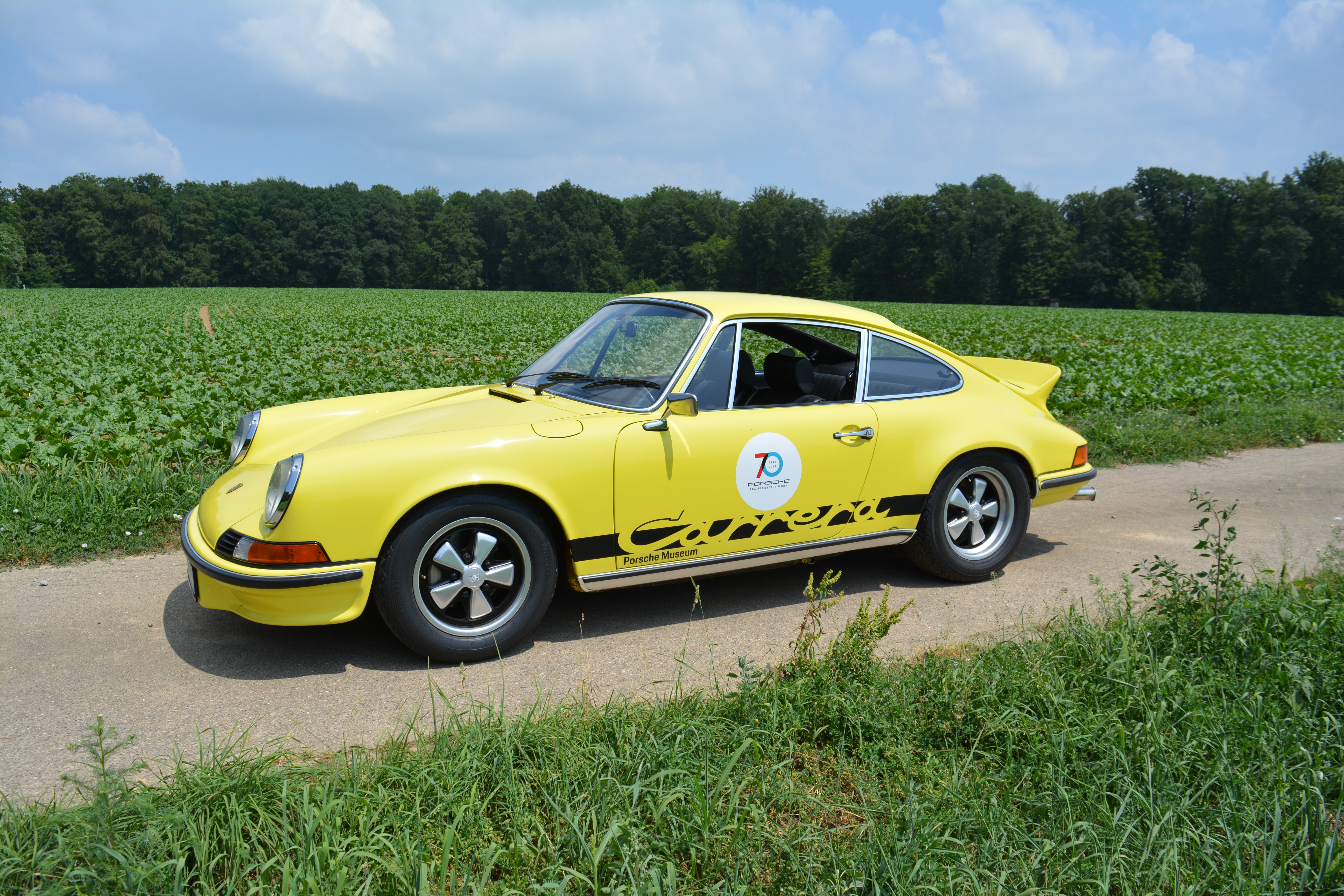 There was power and plenty of it. The 210-horsepower flat-6 also loved to rev but speed did not pile on as quickly. Mind you the car was fast but what threw me off was the seriously comfortable ride. This RS also had power steering, so it felt like a luxury car after driving the 964 RS. The brakes were also strong, and they too poked me to go faster. Even if the suspension dialed back the road’s nastiness, which seriously helped my confidence, I did not punch it as hard as others probably would and did. I concentrated more on the event, the moment, the time I had with this fabled legendary superb automobile. Also, I did not want to be the guy to crash a million-dollar car…

The 2.7 RS’ refinement and performance are exceptional – something about it still feels nearly contemporary. Jerry Seinfeld said it best in an episode of Comedians in Cars Getting Coffee that stared his own #115 1973 Carrera RS: “There’s something about this car that feels perfect.” In only 30 minutes of wheel time, I’d understood that this was and is still the case.

My final ride of the day was a blessing, and sustained torture. Of the modern water-cooled Porsches, the 997.2 GT3 RS is, my humble opinion, the best of the best. The combination of its 450-horsepower provided by its Mezger 3.8-litre flat 6-cylinder engine and the chassis’ epically perfect state of tune make this one of the most satisfying cars to drive hard. 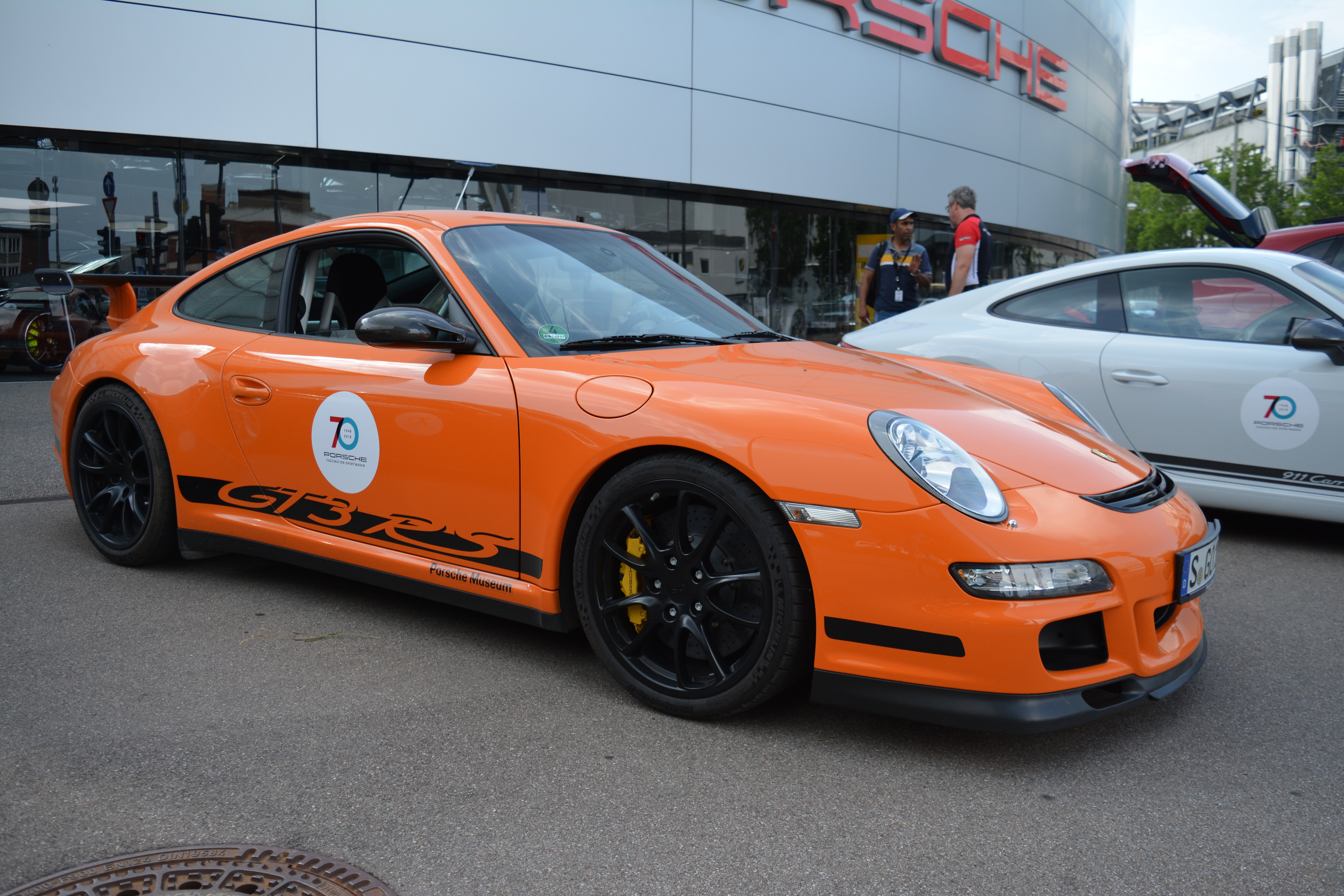 This car is fully exploitable. By that, I mean that the level of handling and feedback from the controls always puts the driver in absolute control. All the while, the right foot stays firmly embedded in the firewall. The provided grip and stability delivered by the aero, tires and impeccable suspension is on par with the available power. This is a true high-momentum automobile.

Where the GT2 RS is blisteringly fast, and despite the massive ceramic brakes and bonkers aero, sooner rather than later, lifting is unavoidable. This GT3 RS’ mechanical and physical ability to grip and steer is so deep that backing off the throttle only denotes that, as a driver, I’d reached my limits long before it has. And there’s another thing. The narrower 997 is not as inherently gifted, or even forgiving, as the 991. The fact that I need to do more work from behind the wheel um, well, turns me on something fierce. Torture because I’ll likely never call one my own.

By the end of the day, at the dinner party and Mission E and Taycan name reveal, I was completely depleted. I’d spent the day driving spectacular cars in the beautiful countryside surrounding Stuttgart, under a hot German sun, and as I stood among all those in attendance, staring at the Mission E, I thought to myself that it was only going to get better…

I was thinking Taycan RS, obviously.

Refresh should include new styling and new MBUX No revolutionary changes expected for mid-cycle update Mercedes-Benz just teased its next model, but this one's...
Read more
Previous articleA modern Toyota Corolla you and I would buy
Next article2018 Porsche Macan GTS Review