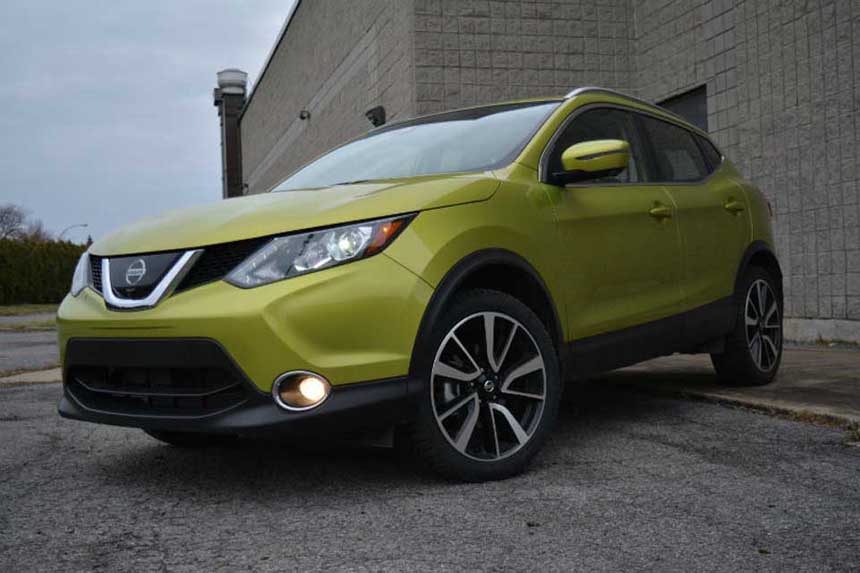 I have a suggestion for Nissan and all those interested in the new Quach, Kash, um, Squash, Nissan’s new compact crossover: Henceforth, we shall refer to it as the QQ. How’s that? Oh, and this wasn’t my idea. Thanks Steve!

So, for those that don’t know, the Qashqai (for SEO purposes…) has been around since 2006 in Europe and other markets. Our brand new 2017 QQ landed as the second generation of its namesake in 2014 in the aforementioned foreign markets. Often referred to as the Cash-Cow, the Qashqai has proven to be a runaway success for the Nissan-Renault (Mitsubishi) Alliance. With roughly 2 million sold since 2006, it’s easy enough to understand why the nickname would stick.

Why is the QQ so popular? That’s an easy one. The Qashqai is good enough at everything. It’s really that simple. Also, it’s affordable and handsome. Nissan’s created the ideal overall compromise daily commuter vehicle by not being the best, biggest, most efficient at anything. And after a week with a Nitro Lime SL AWD, I totally get it.

It would seem, at least after a week’s time, that the majority of Nissan’s efforts went towards the Qashqai’s exterior design. The same could be said for the Rogue as both share some DNA. 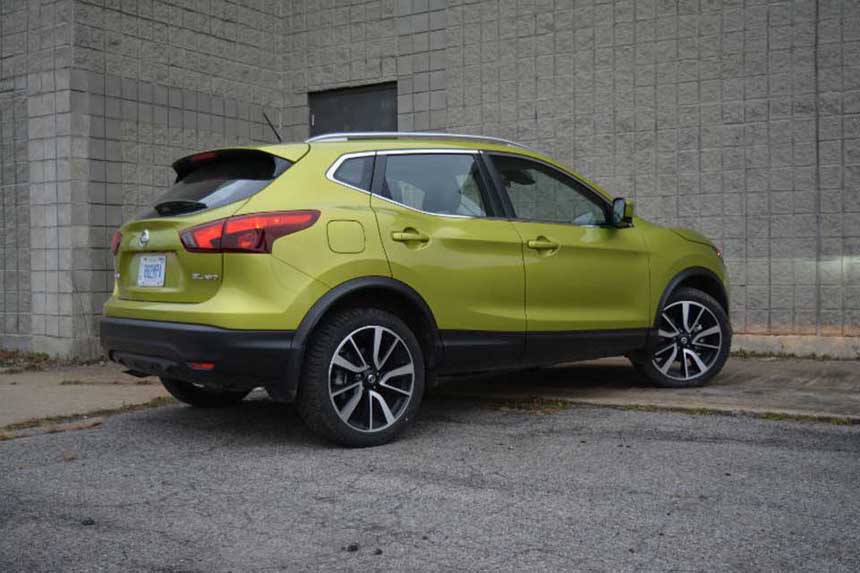 The Qashqai is very Nissan utility vehicle looking and this is an advantage. Some compact ‘utes give off a toy-ish style while the QQ is very grown-up. As with all vehicles, the higher the trim-line, the more attractive. The tested SL AWD includes standard handsome 19” wheels as well as LED headlights, as part of the Platinum package.

The cabin is a little dated though. As I noted, the Qashqai was originally introduced in 2014 so that explains the slightly older HMI, controls and screen. Be that as it may, it’s still all very functional with decent ergonomics and all of the desired modern technologies.

In this segment, it’s all about moving things and people. The QQ falls mid-pack with its 566 litres of cargo space. For comparison sakes, the Honda HR-V serves up 688 litres. The boot’s false bottom and divider are clever and useful. 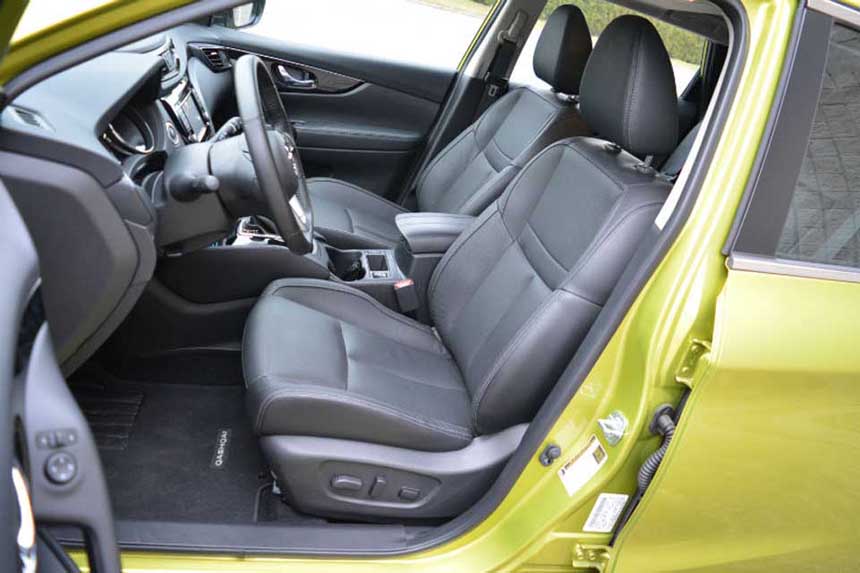 The rear bench is ideal for two adults, a typical scenario for vehicles in the segment. The Volkswagen Golf Sportwagen is a little wider and can make three abreast more comfortable. On the subject of comfort, the Nissan Qashqai has decent seats in both rows.

The front perches offer good support, thanks in part to the leather that covers all seating spots in the SL. There are plenty of cubby holes and bins for all our must-have gear.

More often than not, budget and pricing are very real considerations in this category. The 2017 Nissan Qashqai’s $19,998 starting price for the S FWD makes it an affordable way to get into safe and efficient family transportation. The least expensive AWD QQ is the S and it retails for $24,198.

At $26,798, the SV AWD is the best value. It includes a remote starter, heated steering wheel, 17” wheels and more. My SL AWD starts at $29,498 and features loads of kit. Look for the larger wheels, NissanConnect with navigation, hide, around view monitors and the 7″ touchscreen display. An $2,700 for the Platinum package adds loads of active and passive safety features including blind spot monitoring, intelligent cruise control and more.

All Nissan Qashqai are motivated by the same 2.0-litre 4-cylinder engine. It produces 141 horsepower at 6,000 rpm and 147 lb.-ft. of torque as of 4,400 rpm. FRW models are equipped with a 6-speed manual transmission by default. All AWD versions get Nissan’s Xtronic continuously variable transmission, or CVT. 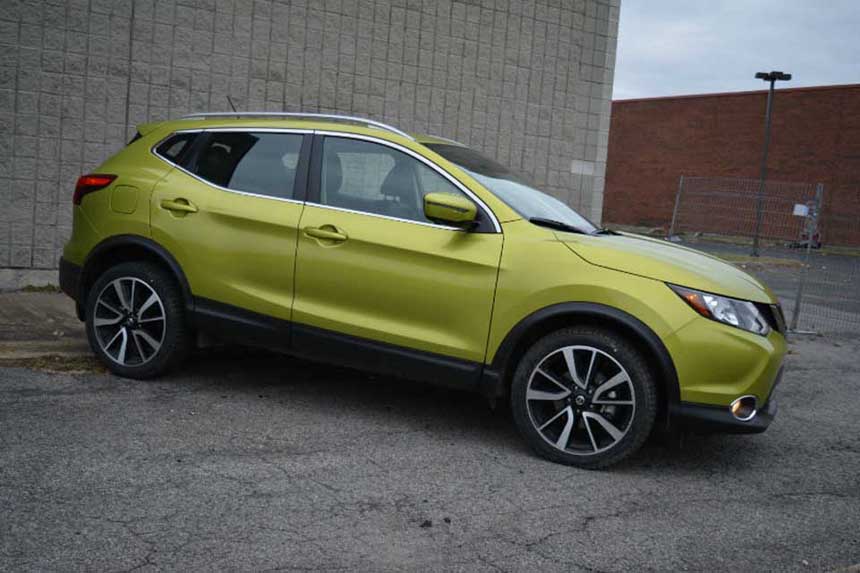 Here’s where I tie in what I was saying before. This powertrain provides enough energy to get the QQ up to speed. The CVT continues to suffer from rubbery or elastic-y response to throttle application. There’s a delay that is further amplified by the lack of low-end torque. When cruising, and I mean driving in a dense urban area with a 30 km/h speed limit, it’s not an issue. The moment speed limits rise, on a boulevard for example, it can become annoying. And despite CVTs helping fuel economy on a larger scale, I could average no better than 10L/100km, which I managed to best in a larger more powerful 3-row 2018 Volkswagen Tiguan.

The ride quality is on par with expectations. The fully independent suspension manages road irregularities without upsetting comfort. Steering is well assisted while the brakes are responsive. To sum up the drive, it’s just fine. And in the end, that’s more than good enough for most consumers.

The 2017 Nissan Qashqai is interesting because it does nothing exceptionally well, and by the same token, nothing truly bad. It just is and in this instance, it’s actually perfect.

The Single Motor version is now RWD instead of FWD and it offers up to 483 kilometres of range. Sustainability improvements have reduced...
Read more
Previous article2019 Chevrolet Silverado coming to the Detroit Auto Show
Next article2018 Nissan Leaf First Review