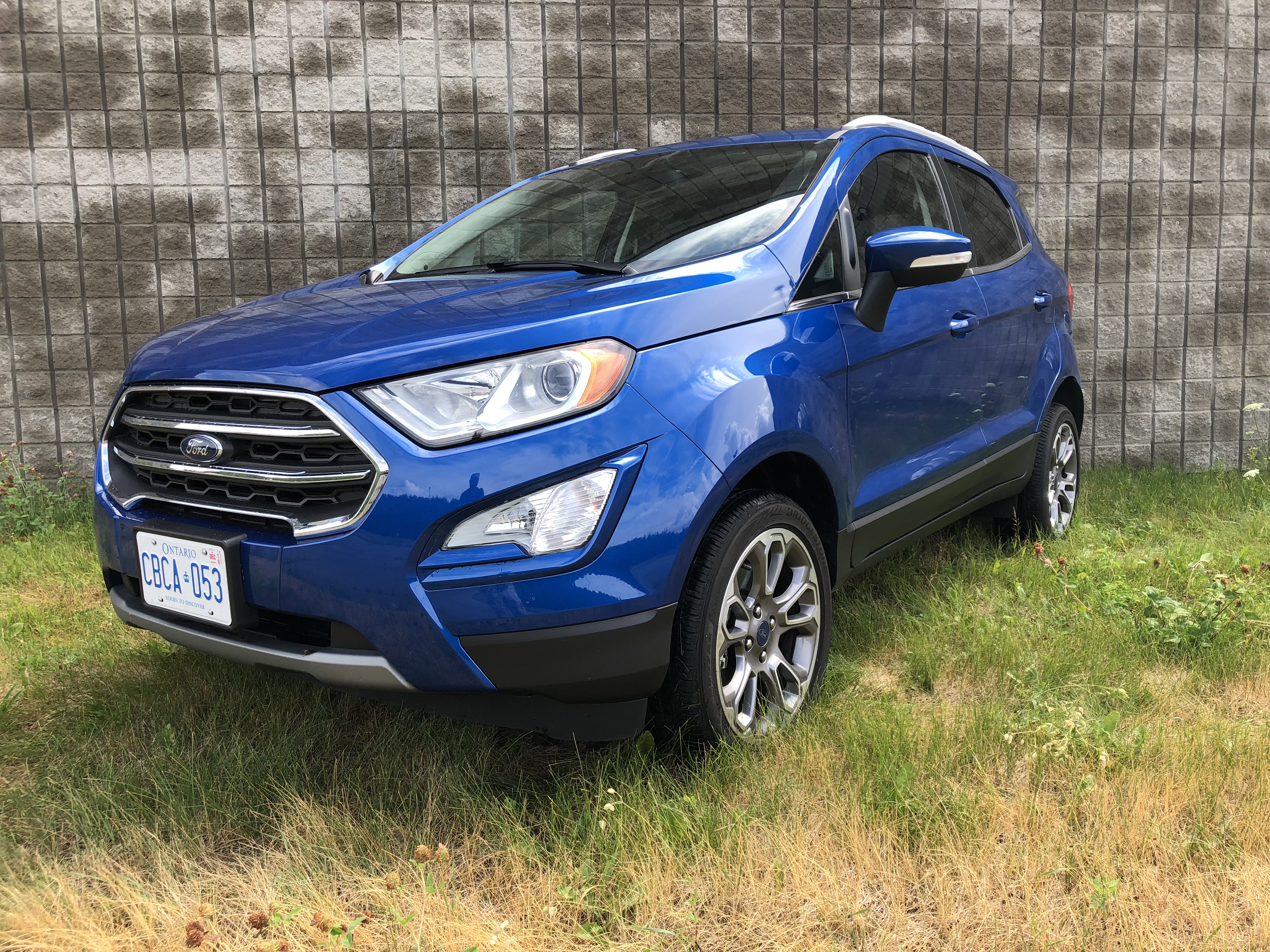 If you’ve ever doubted the power of the crossover, I promise you will see the light sooner rather than later. Car makers have seen the light and are you’re likely to have noticed the uncanny number of new non-cars in advertising and on the road recently. Some manufacturers are growing their number of offerings while others are slowly replacing one with the other

Ford dropped a bombshell a few months ago when they announced that they will be phasing out the majority of their cars over the next few years in favour of crossovers. The all-new Ford Ecosport is one such vehicle that is picking up where another one is leaving off. The Ecosport is in no uncertain terms a raised Fiesta with a little more interior space, optional AWD and a much, much heftier price. And guess what? Consumers that weren’t interested in the Fiesta seem to like the Ecosport. I can hear Ford laughing all the way to the bank.

The 2018 Ford Ecosport is an attractive small vehicle. The segment is loaded with alternatives and the Ecosport is one of the better looking ones along with the Mazda CX-3, Nissan Kicks and Subaru Crosstrek. No matter the trims, the Ecosport’s short overhangs and height give it an energetic presence. The Titanium does gain 17-inch wheels and a few chrome touches that class it up slightly. 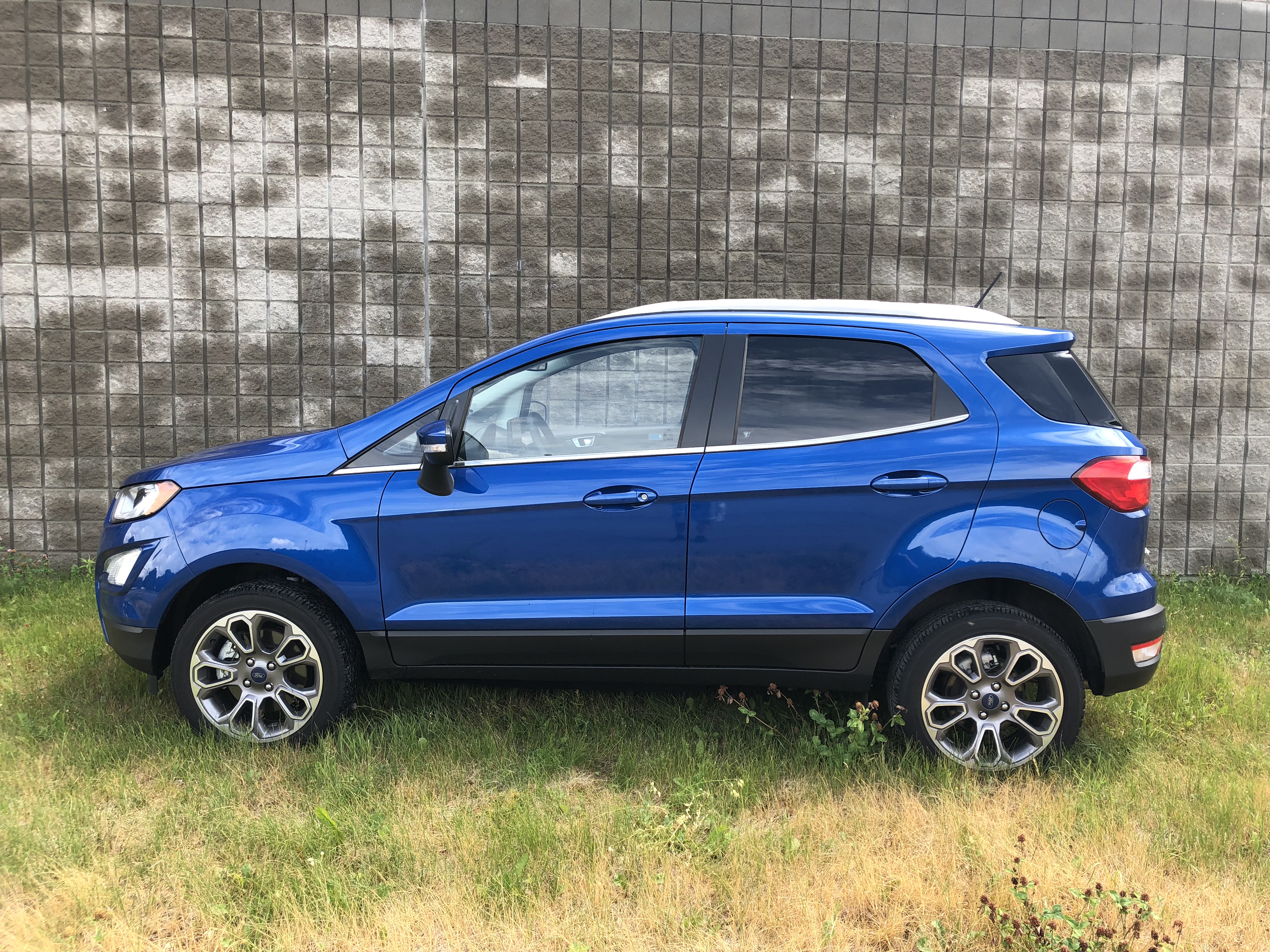 The cabin is simple and utilitarian. The dashboard’s layout is straightforward with easy to operate sections. The HVAC controls are spot on while the central nervous system, the 6.5 or 8-inch displays, are perfectly set. I’m also a big fan of the location of the front USB ports.

Being a sub-compact crossover, the Ecosport wins and loses some points. The major highlights include the wide second row bench that can handle three humans across from each other. These homo-sapiens however, will need to be between 5’2” and 5’10” as legroom can be tight. Also, the lower cushion is very high and could prevent shorter beings from reaching the floor with their feet when seated. 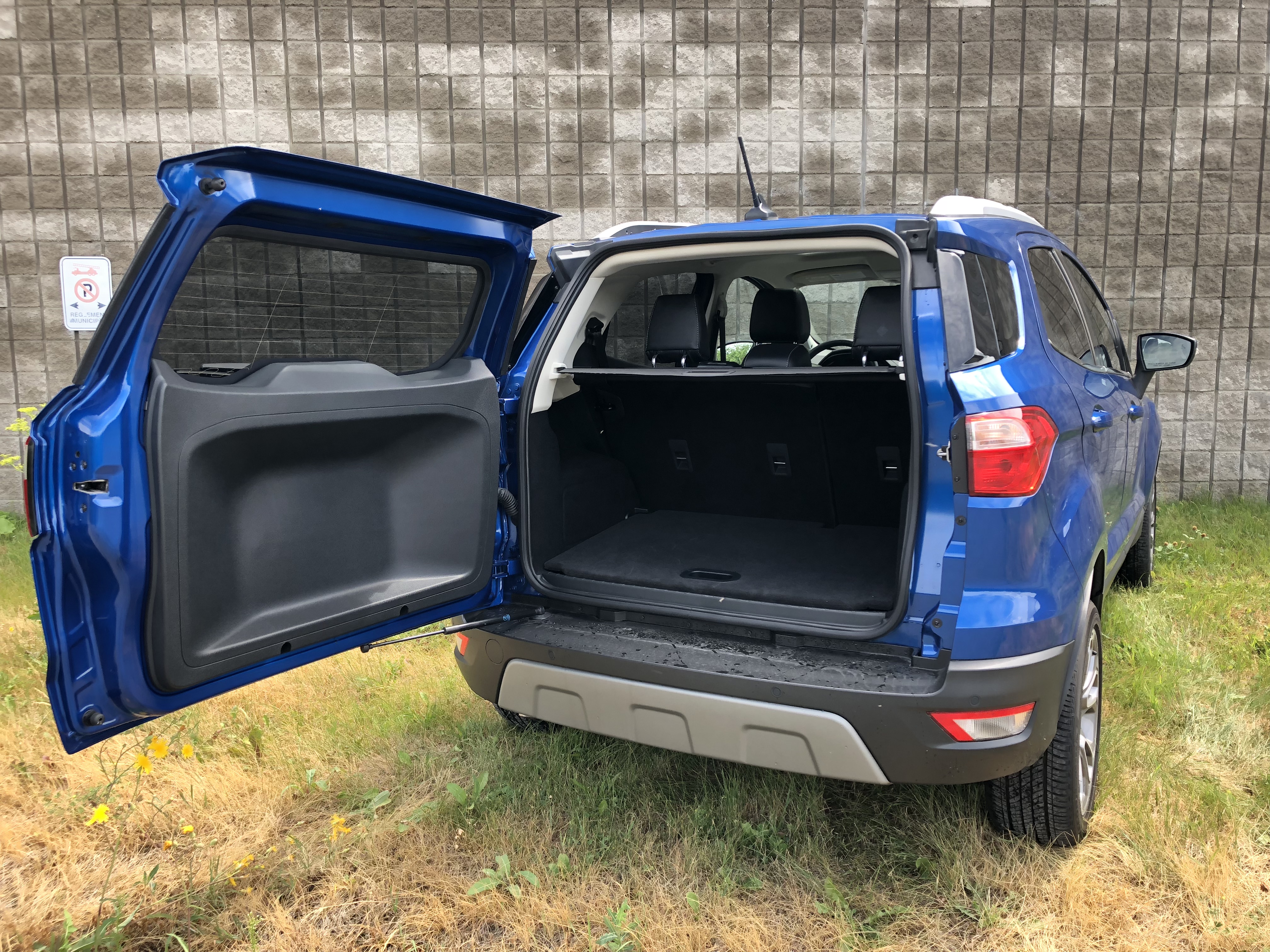 The boot is decent, at least to look at. Ford states that the Ecosport provides 592 litres of usable volume but I can’t see it. The trunk honestly does not seen much larger than that of a Mazda CX-3, which is rated at 140 fewer litres. The strange, somewhat backwards rear barn-door style opening could be an issue in tighter parking situations… It’s an old problem that was, until now, forgotten.

The front perches are comfortable. The driving position is more than acceptable, as is overall visibility. Storage-wise, there’s plenty to go around, be it in the doors, or deep central console.

The 2018 Ford Ecosport is one of the most expensive players in its segment. This is not something most want to hear if they are interested in the vehicle. Base price for the FWD S is $22,099. Adding AWD (only available with the 2.0-litre 4-cylinder engine) to the S, SE and Titanium requires a premium that varies between $1,700 and $2,275. Only the $29,399 SES offers it as standard. 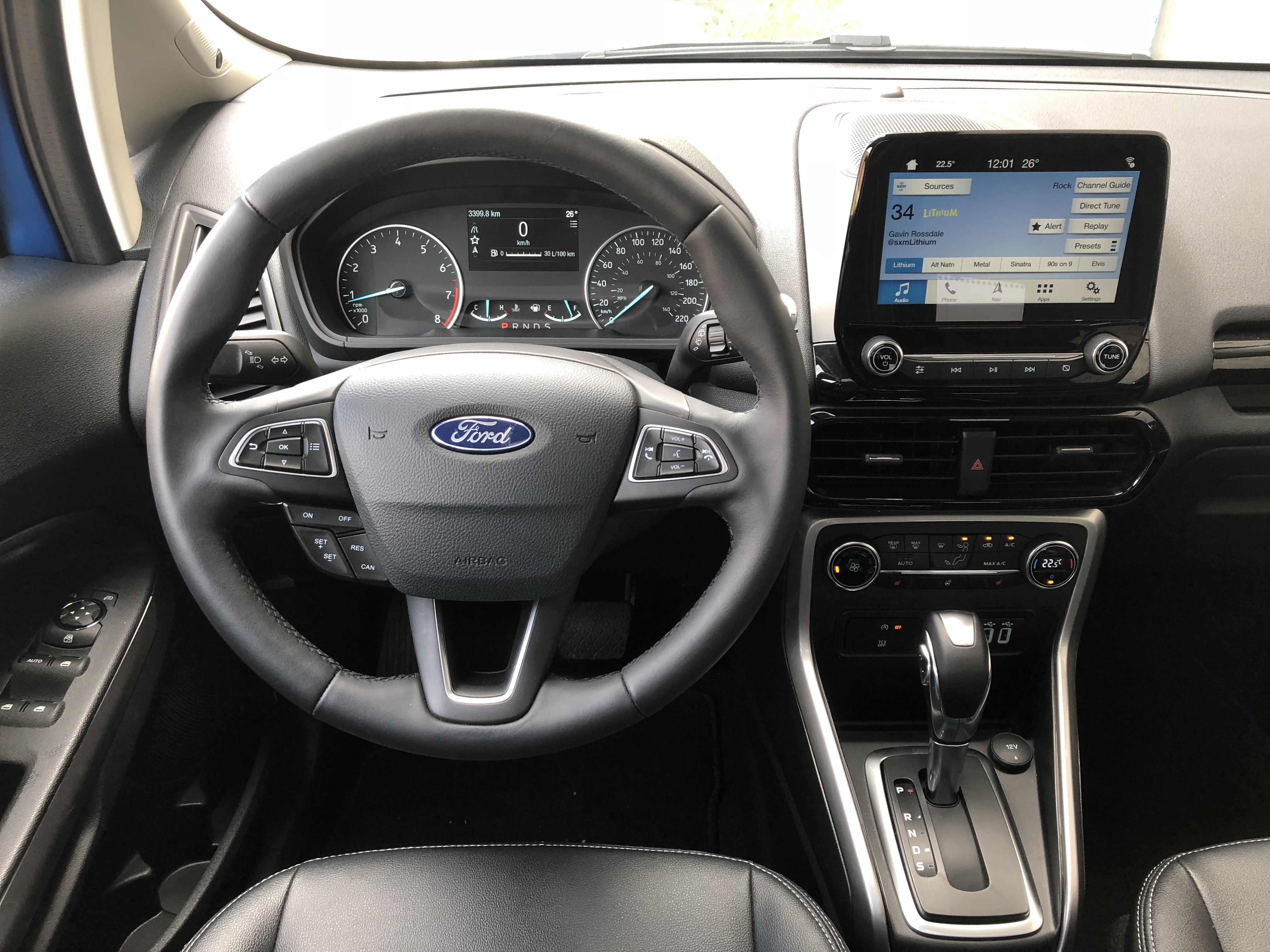 The Titanium trim begins at $28,599 and includes leather seats, navigation, the B&O Play premium audio system, the 17-inch wheels and more. Add AWD and you’re staring at a $31,099 small crossover. By comparison, a 2019 Mazda CX-3 GS AWD with the luxury package (leatherette, moonroof) and navigation retails for scarcely more than $27,500. Ouch.

What the Ecosport has that all others do not is Ford’s SYNC3 which crushes the competition. If this feature and AWD are musts, the SE with AWD is the best option at $27,599.

The pricing might not be a strong selling point especially when compared to the Ford Escape. Not only is the Escape barely pricier than the Ecosport but, and hold on, it does not consume more fuel. That’s right, the last larger and heavier Escape I reviewed barely requested more petrol per 100km and it was powered by the 245-horsepower turbocharged 2.0-litre.

The actual figures are a complete turn off. I averaged just shy of 10L/100km with the Ecosport compared to about a litre more per 100km with the Escape. That’s abysmal, especially when considering that the CX-3 will easily manage 8.5L, as will the Honda HR-V and Subaru Crosstrek.

The 2.0-litre 4-cylinder engine included with AWD produces 167-horsepower and 149 lb.-ft. of torque. These numbers are bigger than many of the Ford’s competitors but its 1,500 kg weight (150 kg more than the CX-3) hurts performance. Torque comes in at 4,500 rpm but even when it’s full on, nothing much happens acceleration-wise. The 6-speed automatic transmission plays along nicely but the fact of the matter is that any amount of daily cargo and people carrying will negatively impact performance and fuel economy.

This is in stark contrast with the driving experience which is very good. The ride is quiet and refined, and the suspension’s calibration can go from comfortable to fun in an instant.

The 2018 Ford Ecosport is both in the top and bottom of its class. The lower points however heavily outweigh the pros. In fact, I see no reason to opt for an Ecosport when the Escape is parked alongside it in showrooms. There are no tangible advantages to the little Ford until pricing drops, or a more interesting and efficient engine finds its way under the bonnet.

The new Lyriq Tech trim level will be responsible for this $4,400 discount over the 2023 base price. This version will forgo some...
Read more
Previous articleTrump Administration dialing back Obama-era federal fuel efficiency standards
Next articleTop 10 new cars sold after 1 year of ownership