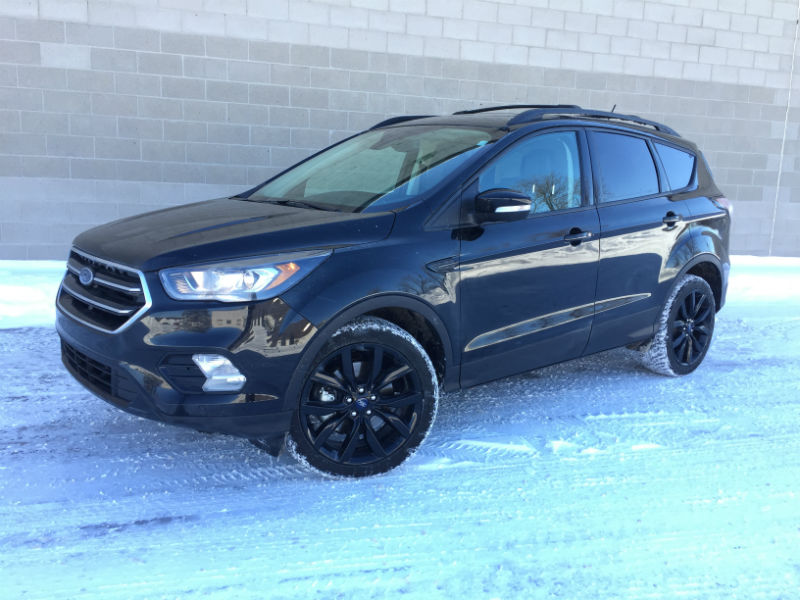 As I’m preparing to give the tax-man the clothes off my back, I was perusing my list of reviewed cars in 2017 and found out, unsurprisingly, that nearly 45% of all the vehicles I drove last year were of the crossover variety. In this pile, I include all things from the Mazda CX-3 to the Dodge Durango, without excluding the likes of the Kia Soul to any of many large luxury SUVs.

This is a fairly accurate representation of what the new car market is up to nowadays and one of the first to have launched the utility segment to stardom en masse is the Ford Escape. The first two generations of the Escape (and Mazda Tribute) were huge players from 2000 (2001 model year) and although sales are still very strong, it has taken a backseat to the likes of the Toyota RAV4 (50,894) and Honda CR-V (50,443). With 47,880 units sold in 2017, it lands as number #3 on the list where it used to own everything. Competition is fierce.

I’d not driven the Escape in a while and after a week, I’ve come to the conclusion that the problem can only lie in the fact that it’s a Ford, and not a Toyota or Honda. Truth be told, as much as I really like both Japanese products, I think I prefer the Ford if mostly for the drive.

The stark physical contrast between the last two generations of the Escape demonstrates the rapid evolutionary rate that this segment is going through. Also, the 2013 Escape was and is a rebadged Ford Kuga. 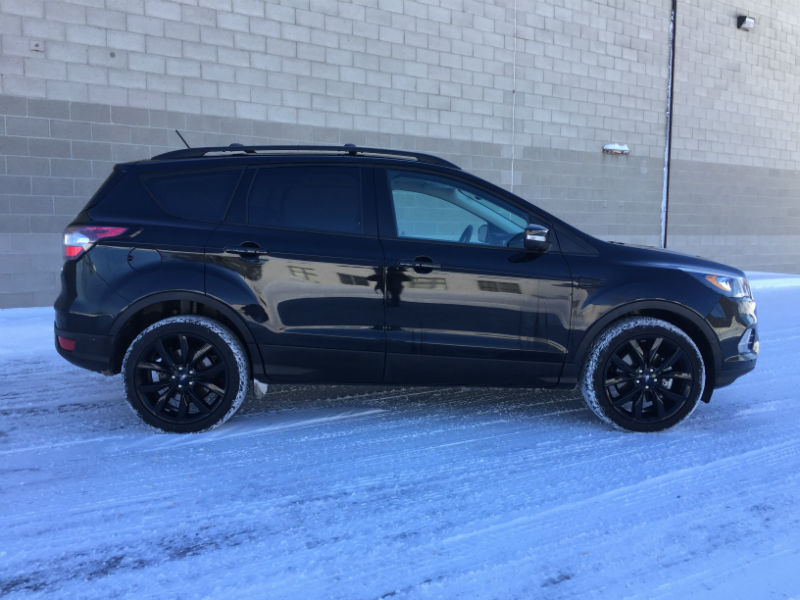 Despite the Escape’s “age”, it still looks fairly contemporary. Its 2017 facelift made sure of that with revised front and rear ends and other updates. The Titanium (and SE) can be enhanced with the Sport Appearance package that include black 19” alloy wheels, and a series of blacked-out features such as taillights, upper grille, roof rails and much more. Personally, I’d opt for a different exterior colour than black to mix with this optional group.

The cabin is not aging as well as the shell, but it retains a high level of functionality. The layout, especially the large protruding center-stack, encroaches on interior space but it’s not dramatic. The gauge pod is large and clear and the 8” LCD touchscreen fits nicely into its environment.

Any good crossover needs to have a suitably sized boot. The 2018 Ford Escape honours this requirement with 962 litres of space. The rear bench is wide enough for three adults and with my son’s large baby seat, two adults can snuggly fit for a short period of time in a bind. Room overall in the rear is decent, limited only by the optional large sunroof which cuts into headroom. 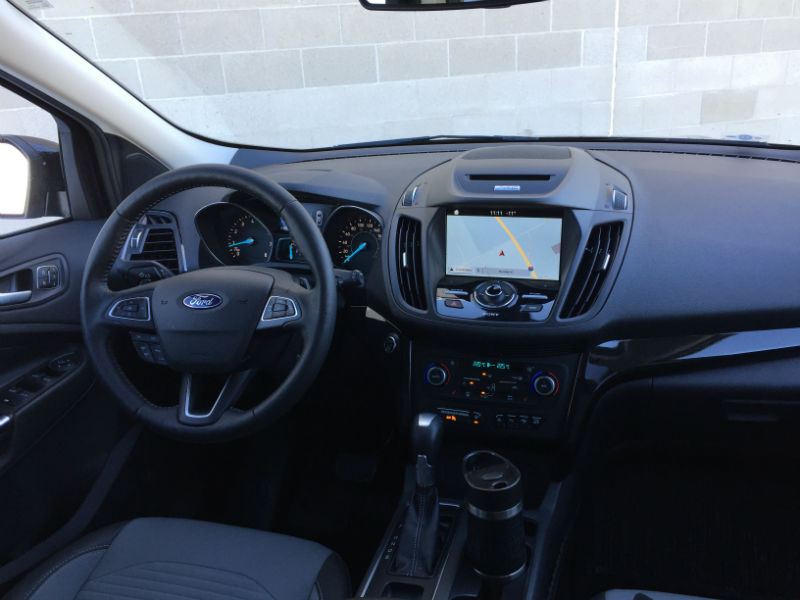 Up front, storage spots are numerous but in retrospect, could be larger or better adapted to 2018 family needs. The front perches are comfortable but the driver’s 10-way power seat including lumbar support takes the cake. There’s plenty pf space for all appendages and best of all, the cabin stays reasonably quiet at highway speeds.

A base 2018 Ford Escape S retails for $26,199. This amount is on par with the majority of its FWD competitors. A top-line Titanium like my tester begins at $37,299. Included for this price are a delightful heated steering wheel, a remote start system, AWD, 18” wheels and more.

My tester came loaded with the Sport Appearance package (paddle shifters, wheels, etc.), massive sunroof, and a few other goodies for a total of just over $40k. Best bet in my opinion is an SE with AWD and few other options for roughly $34-35k. 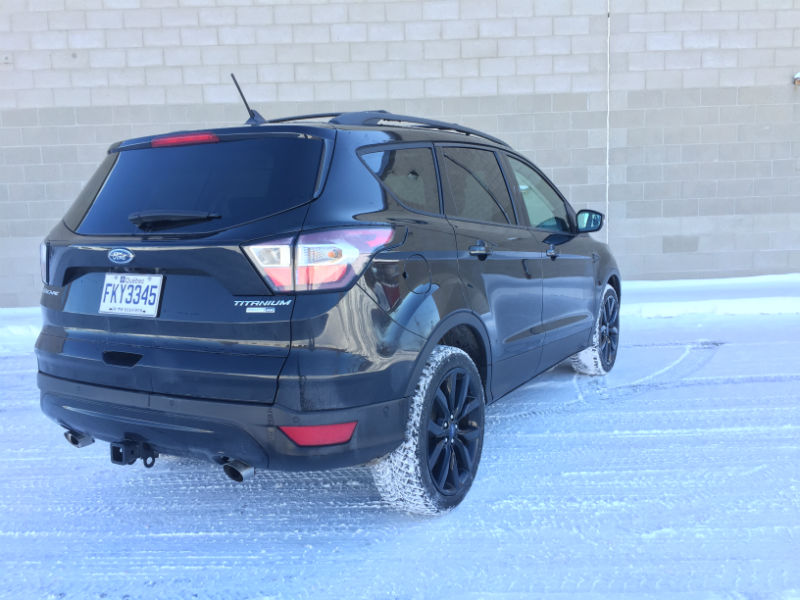 The Titanium does include Sync3, Sync Connect, navigation, satellite radio and some other important connectivity and infotainment features. The majority of these would be included in the SE’s aforementioned optioned out price.

One of the Ford Escape’s main attractions is the drive. The standard 2.5-litre in the S serves little more purpose than keeping the entry-point price as low as possible. The 1.5-litre EcoBoost 4-pot increases performance and driveability but none can replace the 2.0-litre twin-scroll EcoBoost engine.

Capable of 245-horsepower and 275 lb.-ft. of torque on premium fuel, this mill packs quite a punch. Throttle response is spirited, and acceleration is brisk. The standard 6-speed automatic transmission is an honest performer and is in tune with the 2.0-litre’s potential. The downside is that no matter how gentle one is with the vehicle, fuel consumption numbers will hover in the 11 to 12L/100 km range. An AWD GT Mazda CX-5, although not as quick, will best these figures by about 20%.

The vehicle’s ride quality is also quite good. In spite of its relative narrowness and height, the Escape hugs the road without punishing its occupants – it’s a great setup.

What’s not so great is Ford’s Intelligent 4WD system. The one time I rolled into 6” of snow, I lost all momentum. The system seemed incapable of sending power the wheels that had grip. Instead, one rear and one front wheel spun aimlessly. This would not have happened in a Mazda or Subaru.

The 2018 Ford Escape has reminded me why it’s such a popular option. It’s spacious, entertaining to drive and can be well appointed for a decent price.

Approximatively 30 employees are affected VinFast Canada will now be a member of VinFast North America. The employees in VinFast's stores in Canada...
Read more
Previous articleWould you like a Drag Pack with your Hellcat?
Next articleFlyin’ Miata’s will build you a V8 Fiata