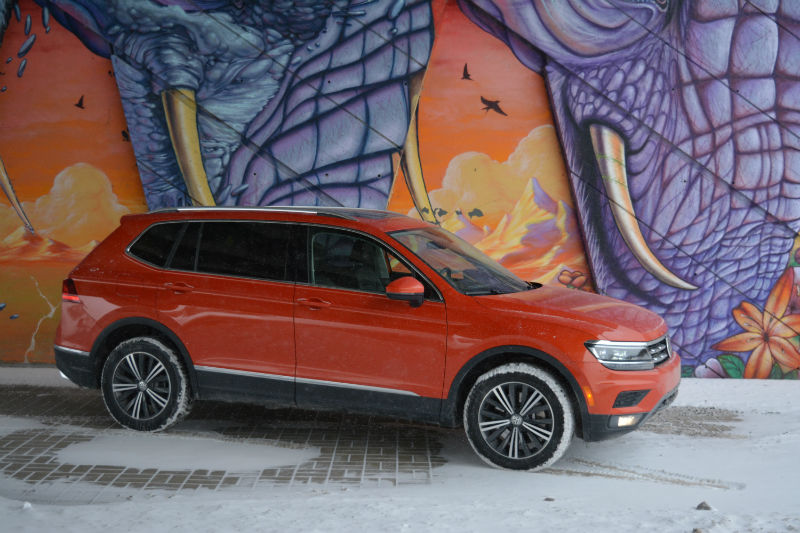 I’ve not done the math but if we were to look back on 2017 and make a list of all the new vehicles, either all-new or refreshed, we’d probably discover that roughly 2/3 fall under a utility vehicle segment.

Like most if not all car manufacturers, Volkswagen’s hard at work readjusting their existing line-up and filling in gaps. In the last year alone, a new Atlas and Tiguan have landed on our shores. Elsewhere in the World, VW’s also introduced the T-Roc and there are more to come.

The Tiguan first arrived in 2009 and although brilliant to drive and behold, it fell far short on the utilitarian side. I owned a 2012 MY for a few years and have firsthand experience with its limited cargo-carrying abilities. In that same period of time, I enjoyed the spirited lively drive, impressive performance and generally well-appointed cabin. In brief, the old Tigger was more Sport than Utility. While I was hoping for a healthy blend of both for 2018, Volkswagen wisely went with more Utility than Sport.

VW set the design stage for its crossovers some years ago with its series of “cross” concepts including the Cross-Blue Concept which eventually became the Atlas. It, the Tiguan and the very cool not-for-North-America T-Cross share the same broad, flat and imposing front fascia. I’ve quickly come to like this look as it blends ruggedness into an upscale feel. 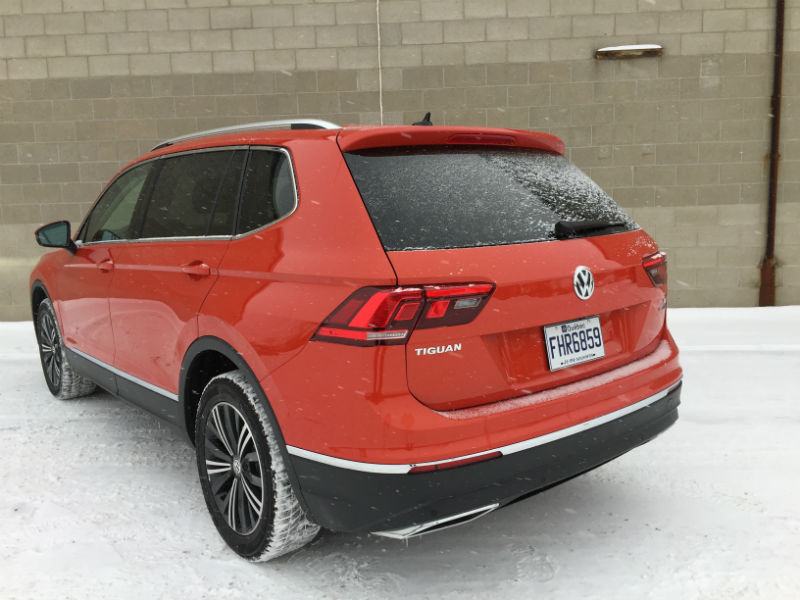 The Tiguan is undoubtedly attractive even in its lower trims. Obviously, it gets better the more cash one dishes out. The Highline gains LED headlight, 18” alloy wheels and a few more accents. Wait a little longer and you’ll be able to spec out an R-Line with its 19” wheels, unique bumpers and wheel arch extensions.

The cabin meets buyers with both style and purpose. Once more, the Highline wins out on design with its Volkswagen Digital Cockpit instrument cluster and superb 8” centrally mounted touchscreen. The instrument panel is simply laid out, with ergonomics and functionality in mind.

High marks are awarded for VW’s efforts here. Allow me to continue by adding that the optional $750 3rd row is a complete waste of money. They’re ideal for kids between the age of 7 and 10 – they’ll refuse to sit back well before you’ll be done paying off the CUV. If you need three rows, go for the Atlas.

Otherwise, the 2nd row is remarkably spacious and adjustable. Even with my boy’s baby seat, two adults can sit side by side. Head and leg room are ample. Up front, the driver wins most of the battles. Decisions were made here by VW that I do not understand. The seats are ok, at best. The passenger’s perch, even in the Highline, has few available settings making it uncomfortable for many. By comparison, a Golf’s seats are comforting, and supportive. The driver is spared the discomfort as power lumbar is offered. And then, there’s the non-adjustable centre armrest. Again, sit in a Golf… 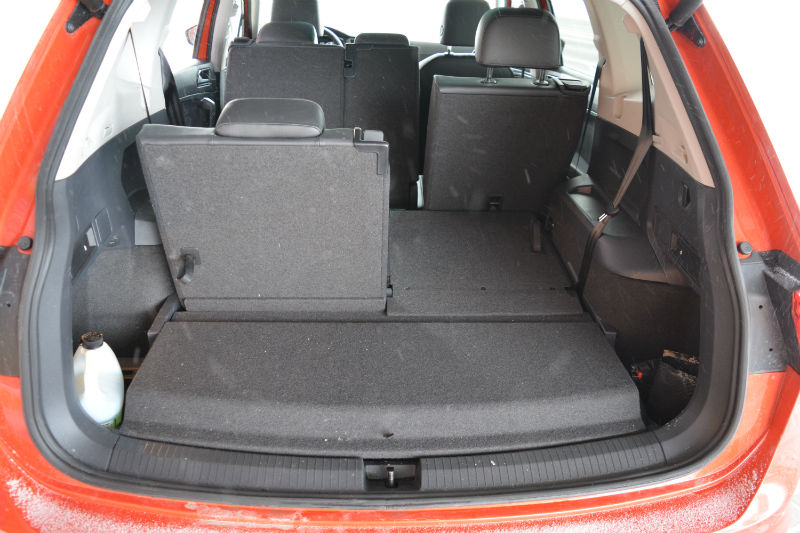 It seems as though the Tiguan got the shorter end of the seating stick in order to keep pricing in check. As both the Golf and Tiguan share the same platform, I can think of no other reason to explain this reality.

The biggest improvement to the new Tiguan is the massive boot. Again, stay away from the 3rd row, and claim an extra 10% trunk volume for a total of nearly 1,050 litres, before dropping the 2nd row. More numbers? The 2018 Tiguan’s trunk is 58% larger than the 2017’s.

A FWD Tigger retails for $28,925. This is another no-no in Canada. 4MOTION AWD requires an extra $1,200 and is worth every penny. The $35,175 Comfortline is the way to go. It is as well, or nearly, equipped as similarly priced competition, which was once unthinkable for VW.

My tested Highline starts at $39,175 and incorporates Vienna leather seats, the power tailgate, heated steering wheel and Fender premium audio. It also includes the Driver Assistance and third row packages for a grand total of $41,395. Once more, the Tiguan lands smack in the middle of the pack. Suddenly, there’s value in a Volkswagen.

There’s basically only one powertrain layout offered in the 2018 Volkswagen Tiguan. The engine is an upgraded 2.0-litre 4-cylinder that sacrifices a little power in the name of more torque and better fuel economy. Horsepower is rated at 184 (was 200) and torque has risen to 221 lb.-ft. from the previous 207. Twisting power comes on from 1,600 rpm to 4,300 rpm while horsepower holds strong from 4,400 rpm all the way to 6,000 rpm. This is another way to say there are no lulls in power delivery. The sole transmission is an 8-speed automatic. 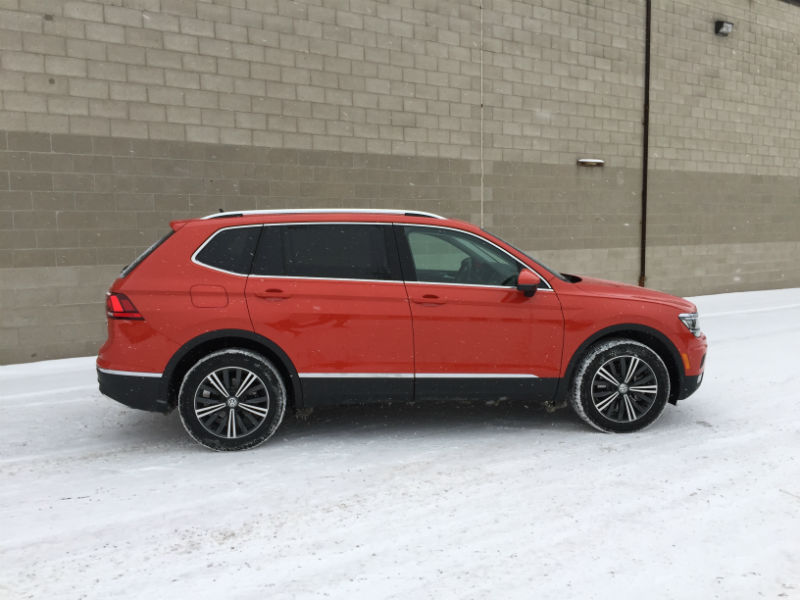 I say only one powertrain as VW’s 4MOTION is a must. The system is heavily front-wheel biased but the daily urban routine will pose nary an issue. All said, the amount of go on tap is decent. Remember, the Tiguan tips the scale at 4,000 lbs and that’s without passengers or gear. Despite the girth, fuel economy is better than decent. I averaged around 9.5L/100 km in winter, a 20% improvement over my 2012 Tigger in summer.

Performance is not high on this Tiguan’s list of skills, as it once was, and this despite the various drive modes including a “custom” mode. Be that as it may, handling is still quite satisfactory. Volkswagen long ago mastered the ability to combine respectable road manners along with comfort. Steering’s fine and the brakes are really good. Overall, the drive is refined enough and the cabin remains quiet even at highway speeds.

The new MK2 Tiguan is now a true utility vehicle and for this reason, Volkswagen will sell a far greater number. In brief, they’ve dialed out some VW DNA and created a more mainstream vehicle.

Those of you that desire a true VW experience and need some utility, the German giant’s got you covered: The Golf Sportwagen and Alltrack.

BMW has five entries out of 33 while Hyundai, Kia, and Genesis have eight entries. The winner of each category will be announced...
Read more
Previous article2018 Nissan Leaf First Review
Next articleFollow the first Tesla Model 3 cross-country road trip