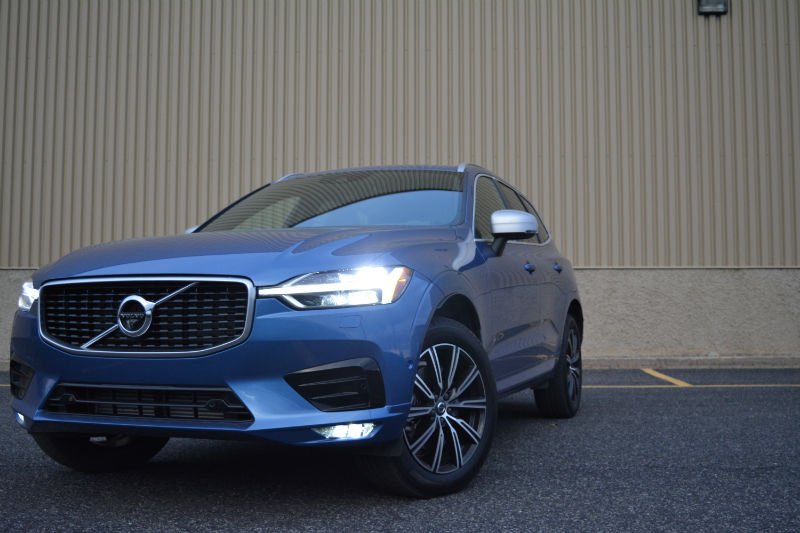 I’ve no shame in admitting that I’ve been a fan of Volvo cars for as long as I can remember. I’ve cycled in and out of “like” with most other car manufacturers but somehow Volvo’s managed to never fall out of favour with me. What makes Volvo special? It does things differently, despite past arguably unfavorable ownerships. It has a flair all its own, a clear and present identity; it’s Swedish, and proud of it.

If many feared that the Chinese Geely Holding Group was going to interfere in Volvo’s uniqueness, they were wrong. In the face of adversity, we can still count on the company to build station wagons even if crossovers are all the rage. The current sales king is the new XC60 and there’s no need to wonder why it is, hands down, the best seller of the line-up. The situation may vary slightly in the near future with the coming of the new XC40 (we’ll have a review for you in early December). In the meantime, the 2018 XC60 meets and exceeds all expectations.

The XC60’s only flaws? First, it’s not a station wagon and second, well, read on.

Scaling down a design seems to always work. The Audi Q5 looks better than the Q7. Same goes for the Mercedes GLC over the GLE and the Lincoln MKC over the MKX. There’s a new such example in the latest XC60 slightly outshining the larger XC90. 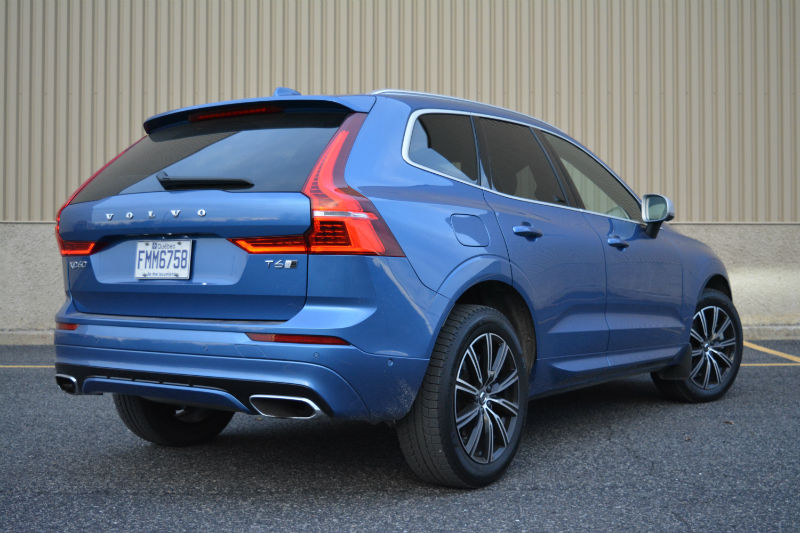 All trims are attractive but none more than the R-Design. These versions are distinguishable by their bespoke front grilles and fully painted bumpers. Other hints include satin silver roof rails, side-view mirrors and side window trim.

The R-Design is visually taking however the included 19″ R-Design 5-twin-spoke matte black diamond-cut alloy wheels look aftermarket, as in purchased off the Canadian Tire mag-wheel rack. Not good. Thankfully, there’s an easy solution to overcome this: For a cool grand, 21” wheels will be slapped on and, if the ute is draped in Passion Red or Bursting Blue, you might just have the handsomest luxury CUV out there. 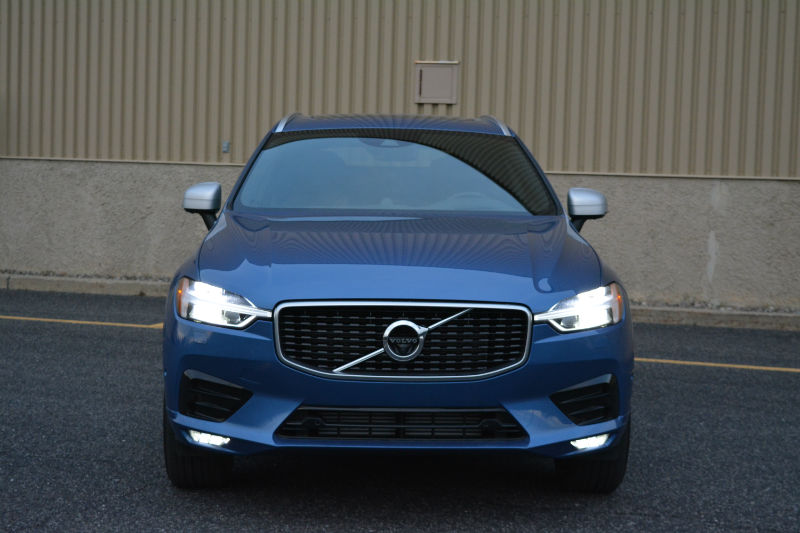 The cabin carries forth with more typical Scandinavian touches such as excellent seats, superb fit and finish to go along with the clean and modern dash design. The centerpiece is without a doubt the 12.3” touchscreen (R-Design and T8) that works exactly like an iPad. The moment this sinks in, swiping left or right and selecting among the many features becomes second nature. There are very few other controls other than those placed on the grippy R-Design steering wheel. The available connectivity and infotainment elements are huge.

For a family of four, the XC60 lacks nothing. The boot is capacious at 731 liters and accessed via a standard power tailgate. The rear bench is as welcoming as it is comfortable. The optional Climate Package adds not only rear heated seats but a heating function to the steering wheel also.

The front seats are typically Volvo. Included with R-Design are mechanical cushion extensions that take leg support to another level. Granted the vast number of possible adjustments could mean that finding the ideal driving position might take a while. Once done however, you may never want to leave the confines of your XC60. 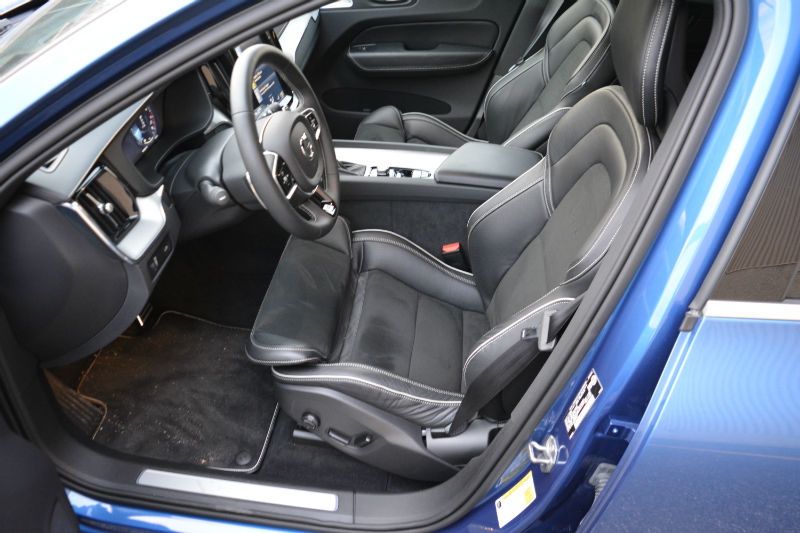 There are plenty of spots for phones, keys and more. A funny thing happens when, if like me, you position a phone holder on the windshield and plug said phone into the USB port under the armrest. The screen is sensitive enough that it will change function/position/menu when the cable gently taps it. This is more a nuisance than anything else. I pinch a part of the cable into the nearest vent and the issue is solved.

The new 2018 Volvo XC60 Momentum T5 AWD sports a $45,900 starting price. The value proposition is decent with equal power/kit as the German and Japanese competitors. The same goes for the $52,200 Momentum T6.

The R-Design T6 goes for $55,450 with all the aforementioned features plus Nubuck leather, the Sport Chassis and specific R-Design interior and exterior accents. All of this goes along with the boost in power and a few more touches. My tested beast retails for roughly $66,000. It included the Bowers & Wilkins audio system, heads-up display, Climate package and vision package. The top-line T8 retails for about $70,000.

Just as an FYI, the XC40’s starting price is of $42,100. The only powertrain is the T5 with a vast array of standard features.

All current Volvos carry a boosted 2.0-litre 4-cylinder engine. The turbocharged T5s produce between 240 and 250 horsepower while the turbo- and supercharged T8 hybrids get 400 horsepower and 472 lb.-ft. of torque. The T6s are blessed with between 302 and 316 horsepower and 295 torques.

The XC60 T6’s 316 horsepower make for a very brisk performer. Max torque is full on from 2,200 to 5,400 rpm and the cavalry steps in 300 rpm later. With boost constantly on, there’s never a drop in power but nor is there a penalty to pay at the pumps. I managed a commendable 8.5L/100 km over my week-long test and was never particularly cheap with the throttle. The 8-speed automatic transmission is quite the performer never missing a beat, regardless of the drive mode. On three occasions however, it did harshly pound into gear for no apparent reason, with minimal driver input. 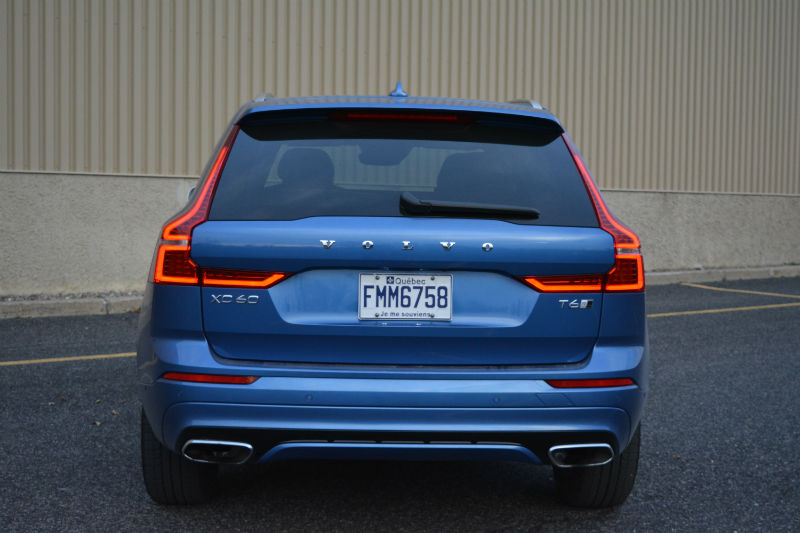 The 2018 XC60 T6’s ride quality is one of its best assets. Unlike the previous XC90 and S90 I drove and reviewed in the recent past, the XC60 was quiet, compliant and very at ease regardless of the road’s surface. The standard with R-Design Sport Chassis manages wheel travel brilliantly keeping comfort levels extremely high. By the same token, the Volvo’s handling is faultless, and confidence inspiring. This is the best driving Volvo I’ve reviewed since the V60 XC 2.5 years ago.

The cabin remains quiet even at highway speeds. There’s barely a hint of wind or tire noise and when mixed with the strong brakes, cozy seats, responsive steering (three different default settings), once more, you may never want to leave the vehicle.

As a best seller for the brand, the XC60 faces stiff competition from the Audi Q5, BMW X3, Lexus NX and Porsche Macan. Yes, a moderately equipped 340 horsepower Macan S (far less kit than the others mind you) can be had for about $5,000 more than my tester.

The new 2018 Volvo XC60 has all the panache of the competition plus it’s Swedish. That’s a win-win.

Jaguar will become fully electric in the next few years. We will get more information on the brand's future in 2023. The first...
Read more
Previous article2019 Lincoln MKC to be unveiled at the L.A. Auto Show
Next articleThe Lamborghini Urus is an animal