Should-you-buy Should You Buy a 2020 Acura RDX? 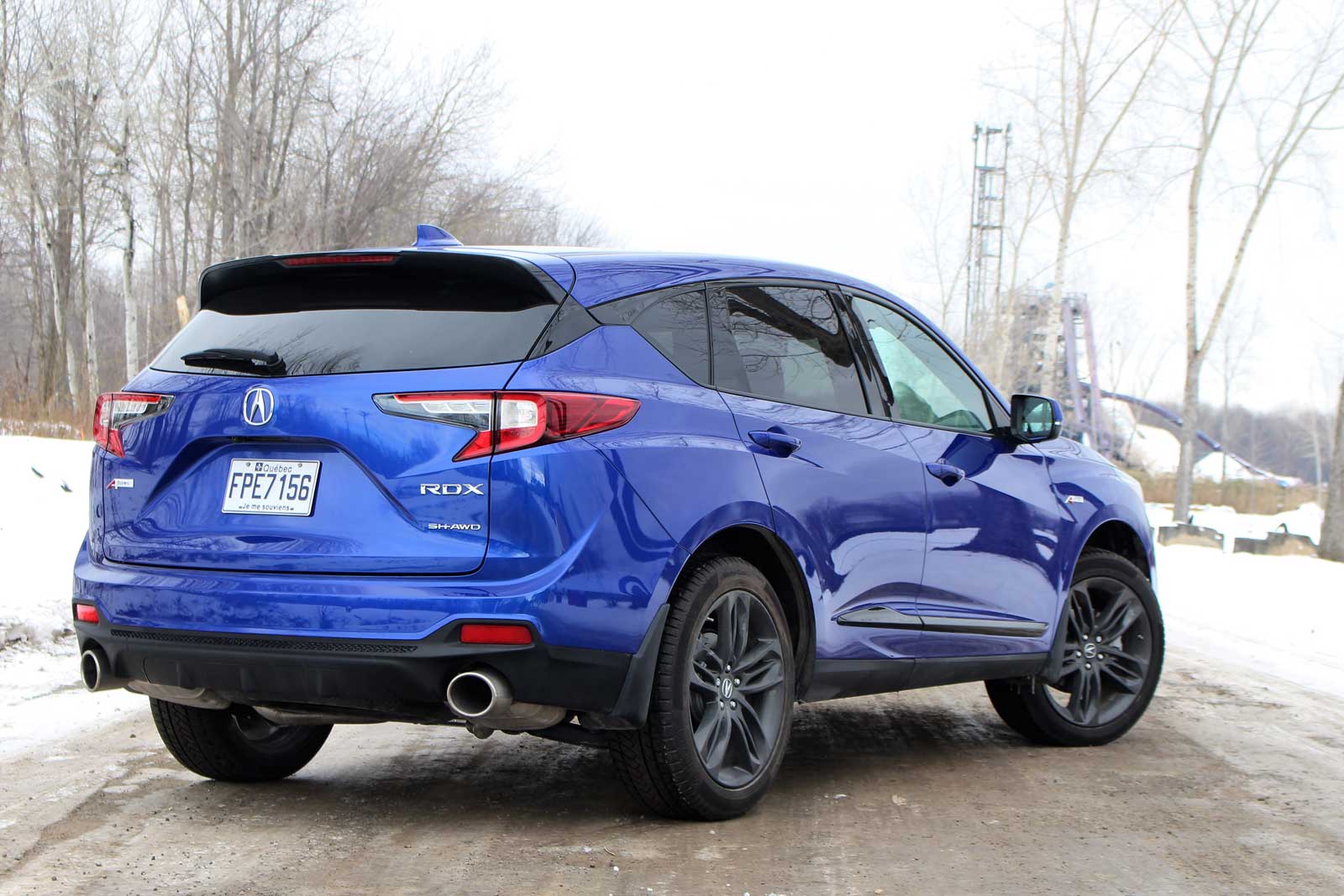 Lots of things to appreciate in the RDX, but there’s a major irritant we must put up with.

The Acura RDX has been on the market since 2006 as a 2007 model, and the current, third-generation model was introduced for the 2019 model year. It’s one of two SUVs in Acura’s North American lineup, alongside the midsize, three-row MDX.

There was a third Acura SUV model from 2010 to 2013, a coupe-like crossover called the ZDX that offered a sportier character than the other Acura models, but didn’t sell very well. Meanwhile, in some markets on the other side of the planet, there’s a subcompact Acura CDX that could potentially do well here, but for now, we’re not getting it. As a result, the 2020 Acura RDX must cover a lot of ground in the luxury SUV market and battle a bevy of competitors.

Among them, we find the American-brand Cadillac XT5, Buick Envision and Lincoln Corsair, the Japanese-brand Infiniti QX50 and Lexus NX as well as the German-brand Audi Q5, BMW X3 and Mercedes-Benz GLC. We can also include the Alfa Romeo Stelvio, the Volvo XC60, the Land Rover Discovery Sport and the Range Rover Evoque. And we’re not counting the fully loaded variants of mainstream compact SUVs such as the Mazda CX-5 Signature and the GMC Terrain Denali. 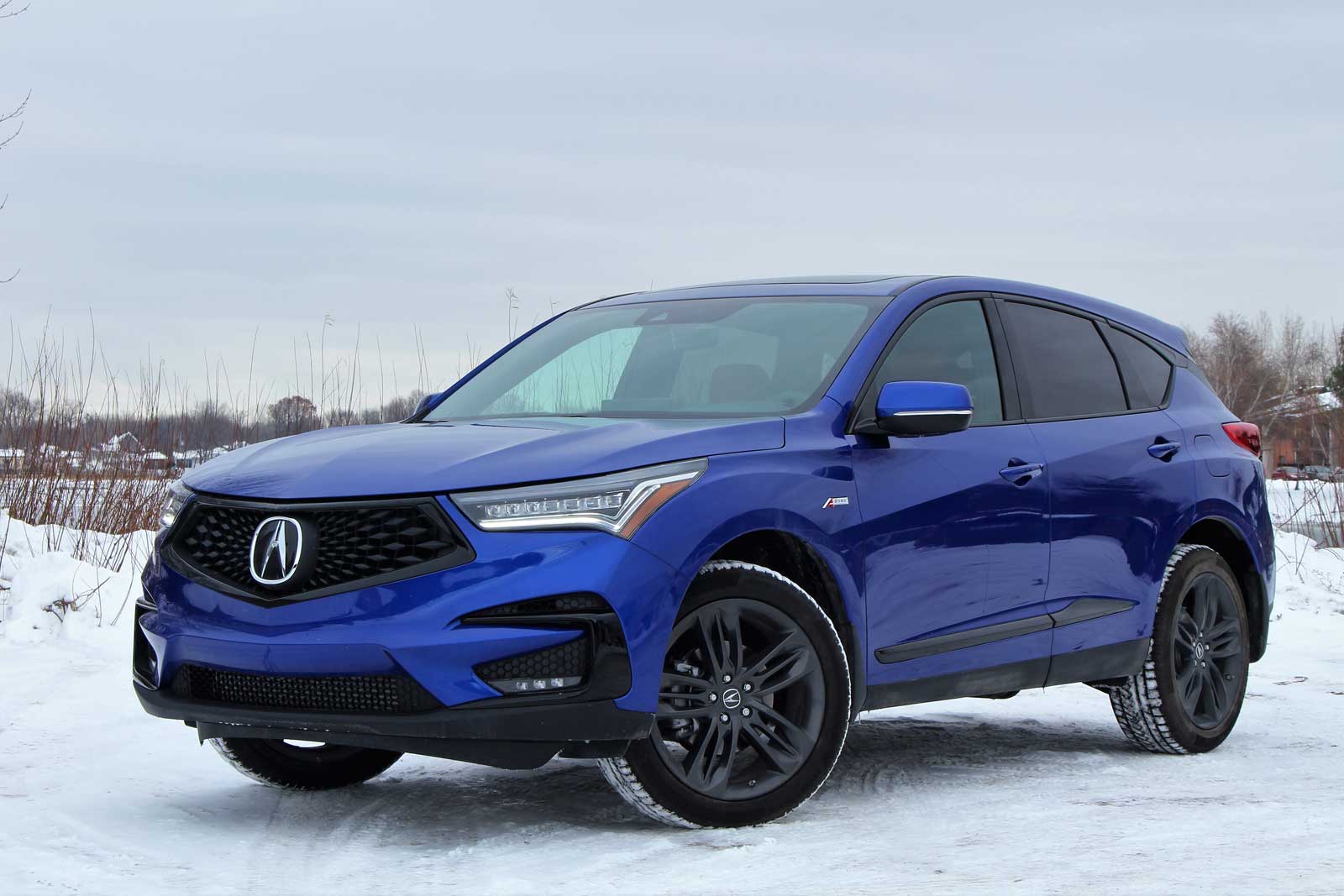 Luckily for the 2020 Acura RDX, it received a full redesign for the 2019 model year, and its appearance is much more noticeable than the bland second-gen model. The A-Spec edition particularly sticks out with its blacked-out exterior trim, gray 20-inch alloy wheels and sportier front and rear bumpers.

There aren’t many changes for the 2020 model year, aside from the RDX now offering Android Auto integration in addition to Apple CarPlay. Since we’re on the subject, the infotainment system gets a 10.2-inch screen that isn’t touch-sensitive, as the control interface is a dual-touchpad interface mounted on the centre stack. Tech and Elite editions get a 12-speaker ELS Studio sound system, while the A-Spec and Platinum Elite boast a total of 16 speakers.

Leatherette upholstery is found in base and Tech editions of the 2020 Acura RDX, while the other trim levels get leather—perforated in the Elite, mixed with microfiber inserts in the A-Spec, and enhanced with contrast stitching and piping in the Platinum Elite. Cargo space is rated at up to 881 litres if we include the underfloor storage bin, and up to 2,260 litres with the rear seatbacks folded down. 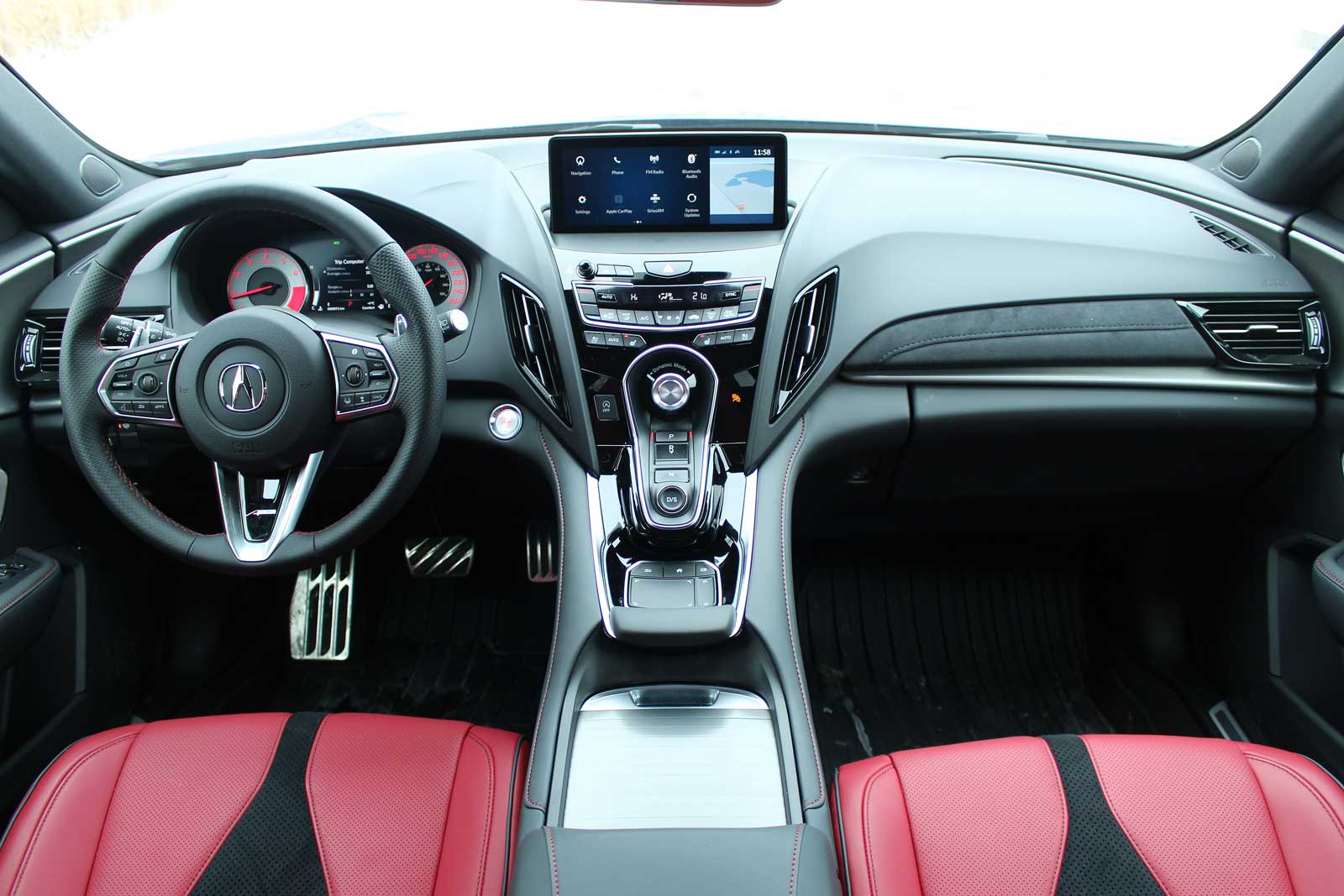 Every RDX is equipped with a turbocharged 2.0-litre four-cylinder engine that develops 272 horsepower as well as 280 pound-feet between 1,600 and 4,500 rpm. It’s managed by a 10-speed automatic transmission that delivers all that muscle to the brand’s SH-AWD system. It’s one of the most powerful four-cylinder engines in its segment, but one of the least fuel-efficient with a combined city/highway average of 9.9 L/100 km—10.3 for the A-Spec variant. Acura also “recommends” using super unleaded fuel, and we averaged 10.5 L/100 km during our winter test.

Acura vehicles usually benefit from strong resale value, which means we’ll be able to sell the RDX for a decent price when we decide to eventually trade it in. That also means more reasonable lease payments for those who prefer keeping their vehicles for a shorter term.

The 2020 Acura RDX’s new looks are sporty and tasteful, and likely won’t go out of style after a few years in the market. The A-Spec is particularly attractive with its more dynamic appearance, which should please consumers who are also considering the Audi, the BMW or the Mercedes-Benz.

The turbocharged engine is gutsy, with plenty of low-end torque to play with. The 10-speed automatic does a wonderful job of providing quick downshifts when we’re in the mood for spirited driving. The RDX also handles marvellously well, and is always ready to barrel down some twisty country roads.

The RDX is competitively priced, starting at $43,990 before freight and delivery charges. Standard features include a power panoramic sunroof, adaptive cruise control, dual-zone climate control and 12-way power-adjustable front seats, while a fairly loaded A-Spec will cost just over $50K.

It’s one of the roomiest compact SUVs on the market, with a good amount of space up front and in the rear-seat area. Cargo space is above average as well. 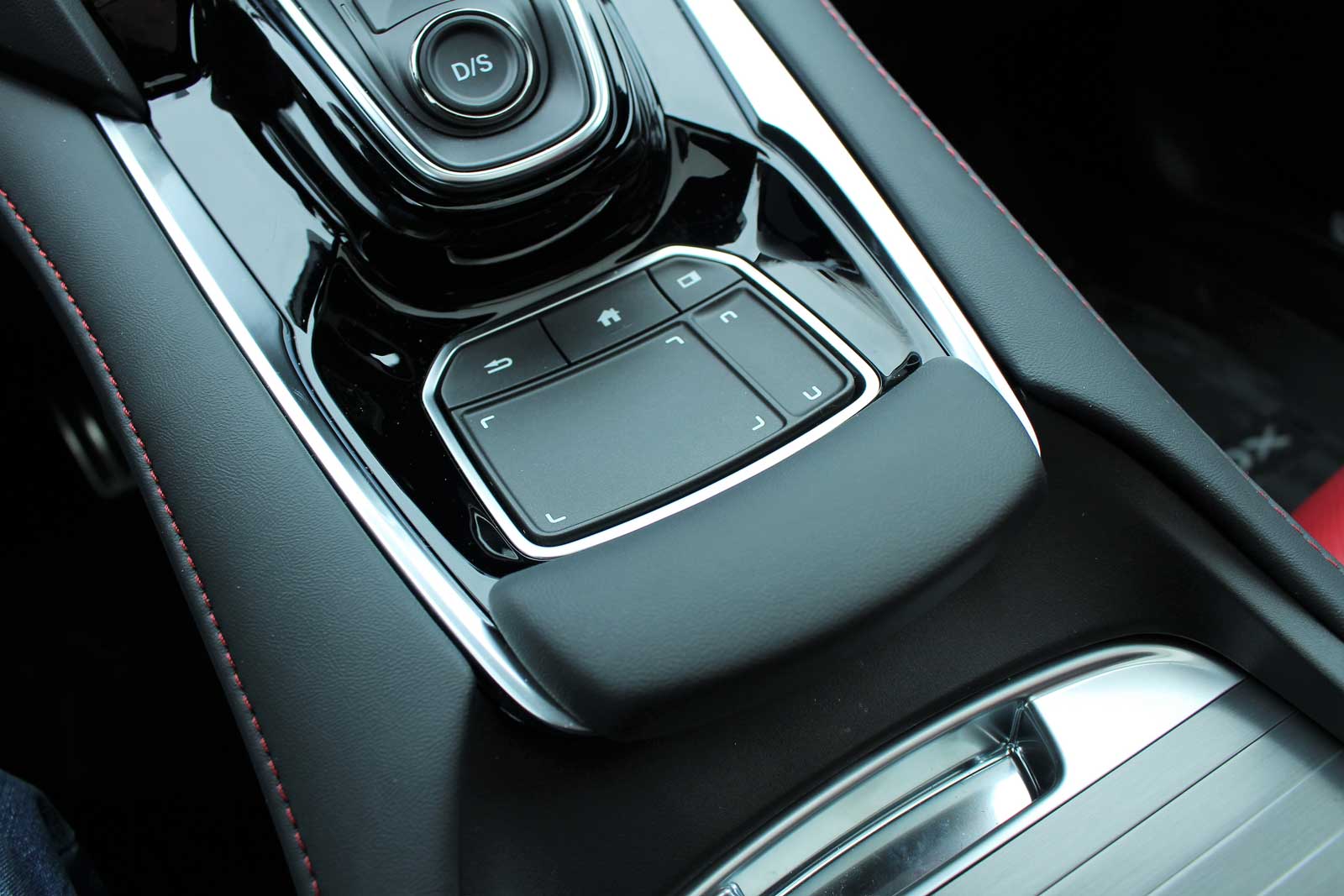 The sporty suspension tuning results in a slightly stiff ride, which is in line with the German brands’ SUVs, but not as cushy as in the Lincoln Corsair or the Cadillac XT5, for example. The adaptive dampers that equip the Platinum Elite variant barely enhance the ride quality.

As mentioned above, fuel economy isn’t spectacular given its engine displacement and what the competition can manage, and as is the case with many rivals, super unleaded is recommended. Rival brands are introducing plug-in hybrid and fully electric powertrains in their SUVs, and nothing has been announced yet in that regard for the RDX. Second-gen owners might miss the smoothness of the old 3.5-litre V6.

Although they bring some extra character to the 2020 Acura RDX, the Sport and Sport Plus drive modes add artificial engine sounds into the cockpit, which aren’t always melodious. Some people like them, some don’t.

The infotainment system interface relies on two touchpads that are not only unintuitive, but distracting to use while driving. A stable finger is required to operate the system, and it’s a difficult task to perform while the vehicle is in motion. Reverting to Apple CarPlay or Android Auto doesn’t solve the problem, either. This system can be a real dealbreaker.

There’s a lot to like about the 2020 Acura RDX, and those who have driven or owned the previous-generation model will feel a big difference between the two. The RDX is fun to drive, modern and well-equipped for the asking price. It just needs a more user-friendly infotainment system interface, and perhaps slightly better fuel economy, to be a segment favourite.

Pony Concept was intended to make production Giugiaro helped launch the Hyundai brand Hyundai is partnering with Giorgetto Giugiaro to recreate the car that...
Read more
Previous articleWhat Is All-Wheel Drive And How Is It Useful?
Next articleMansory Bentley Flying Spur Has Universal Appeal