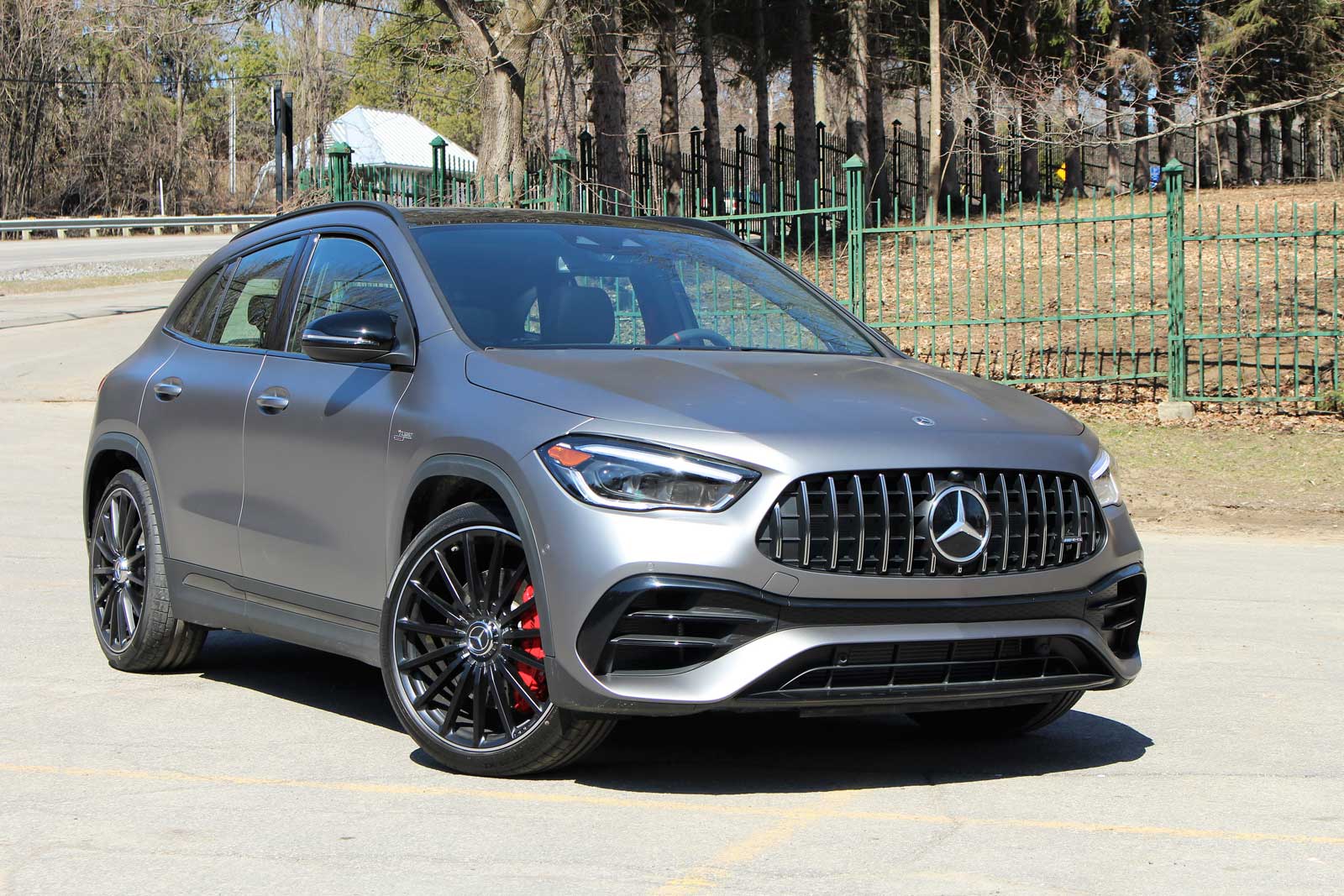 Thoroughly redesigned, the new GLA subcompact crossover has improved in many ways, in addition to offering more interior space and new technologies. There are now two hot-rod variants instead of just one, including the 2021 Mercedes-AMG GLA 45 4MATIC+. 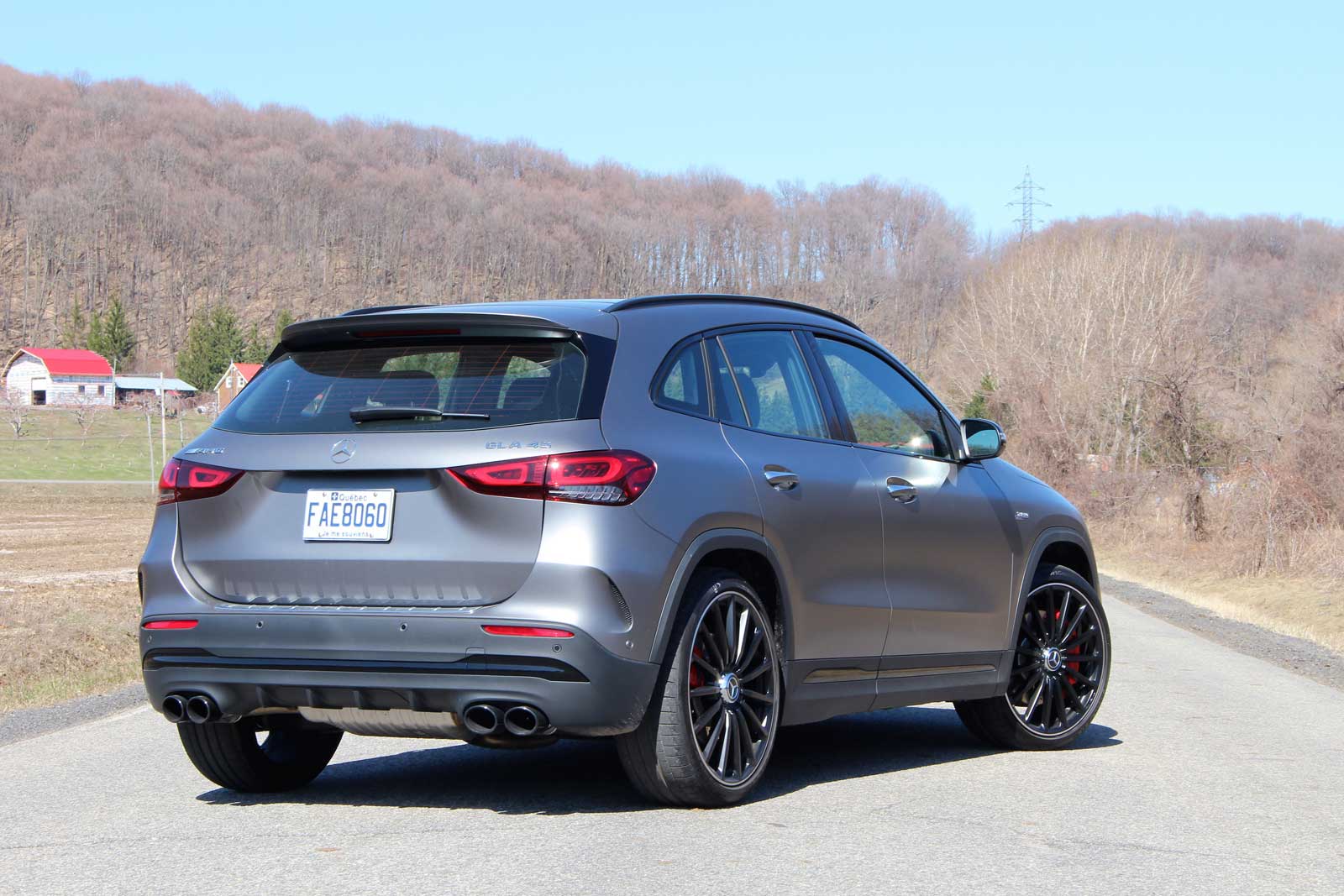 Under the hood lurks a very angry little engine. Hand-built like the brand’s monstrous V8 mills, the turbocharged 2.0L four belts out 382 horsepower and 354 pound-feet of torque, managed by an AMG dual-clutch eight-speed automatic transmission and standard all-wheel drive. This is the most powerful production four-cylinder in the world, says Mercedes-Benz, and its 191.9 horsepower-per-litre ratio even beats that of the 720 hp, twin-turbo 4.0L V8 in the AMG GT Black Series, which makes do with a 180.8 hp/L figure. That’s mighty impressive. 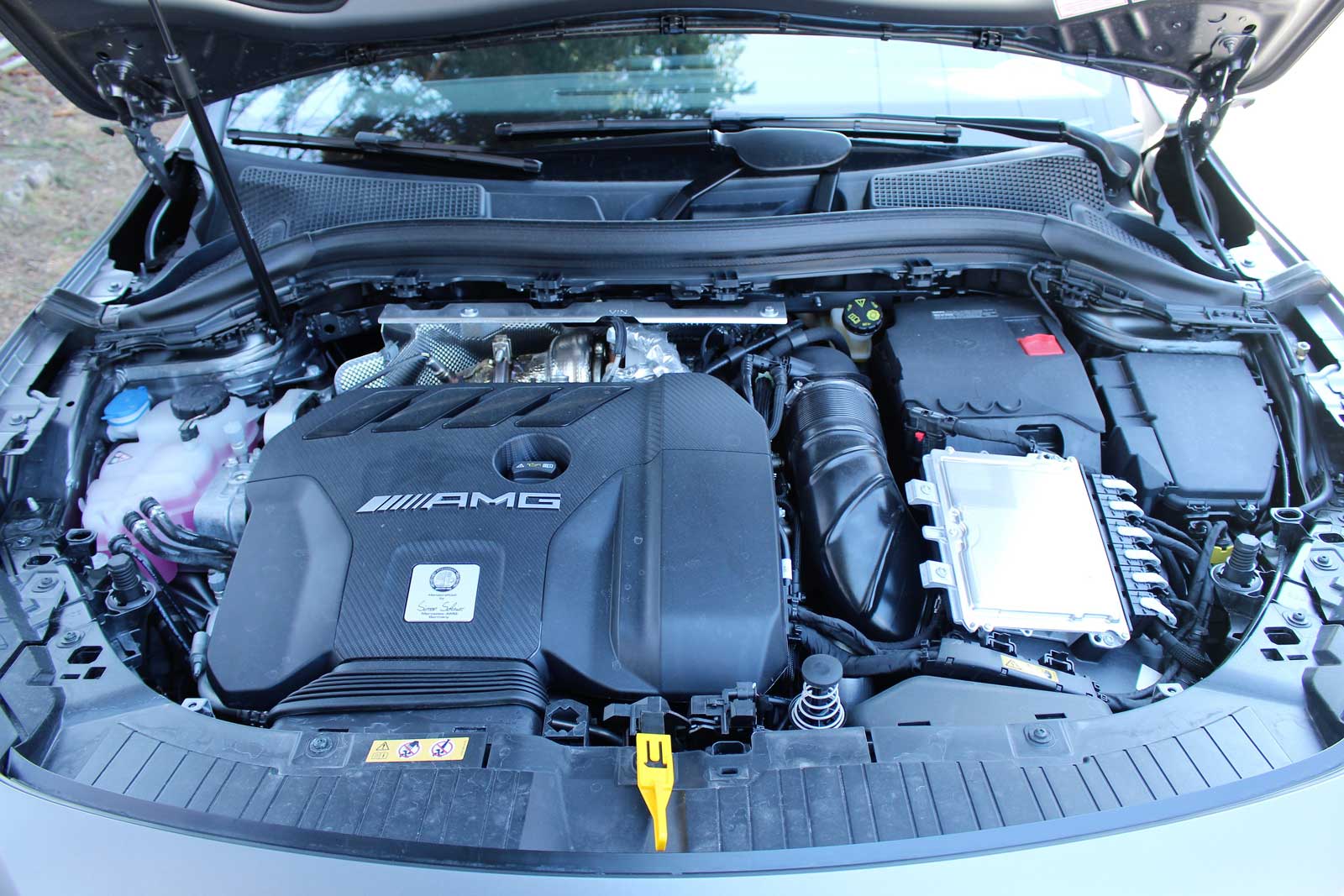 Pricing starts at $54,500 before freight and delivery charges in the United States, and at $60,500 in Canada. Another $15K to $20K in options can be tacked on as well, as was the case with our test vehicle that included almost every option package and significant standalone option. There are no direct competitors to the 2021 Mercedes-Benz GLA 45 4MATIC+ in North America, but due to its price, it ends up rivalling bigger crossovers like the Porsche Macan, the BMW X3 M40i, the Audi SQ5 and even the Mercedes-AMG GLC 43. 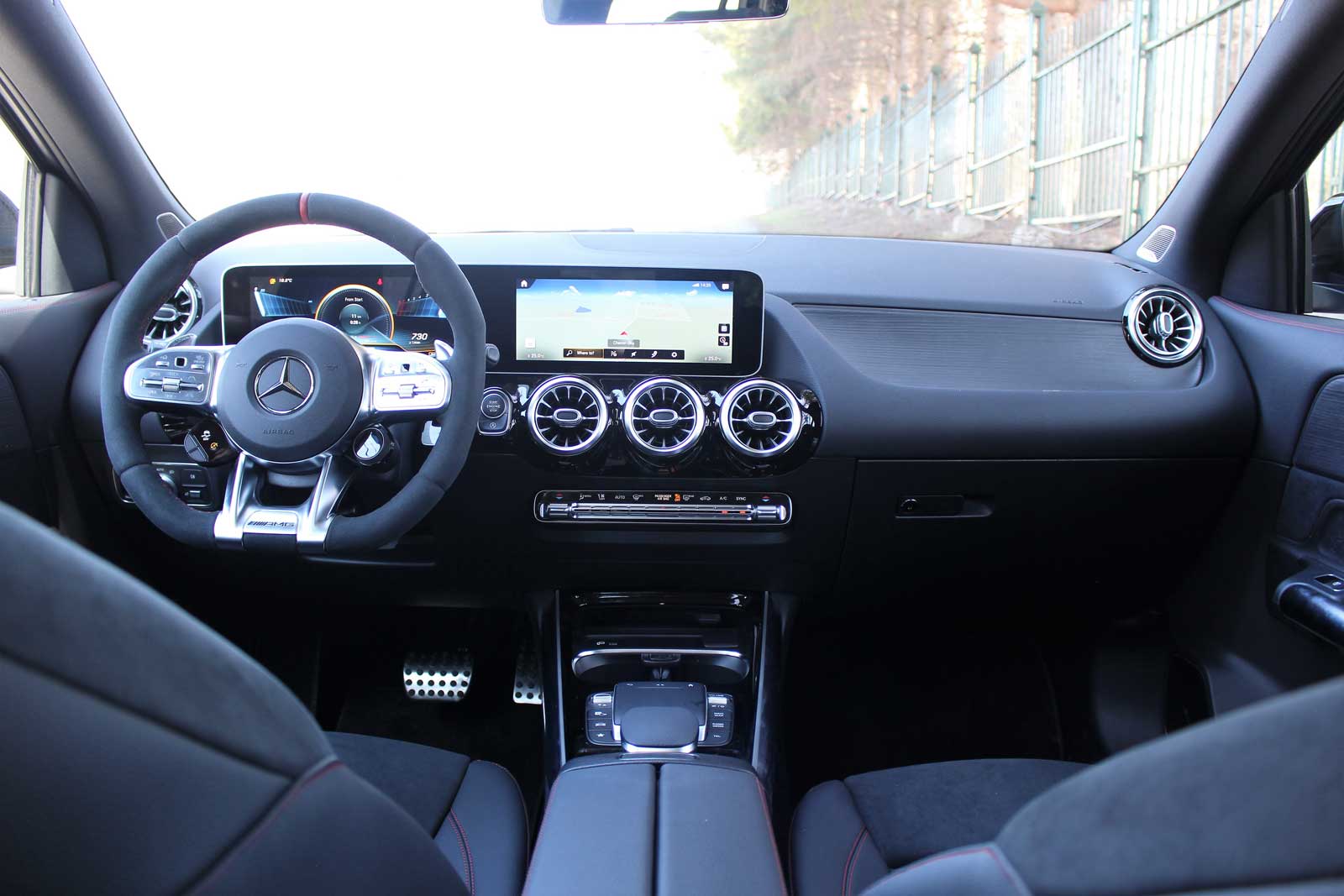 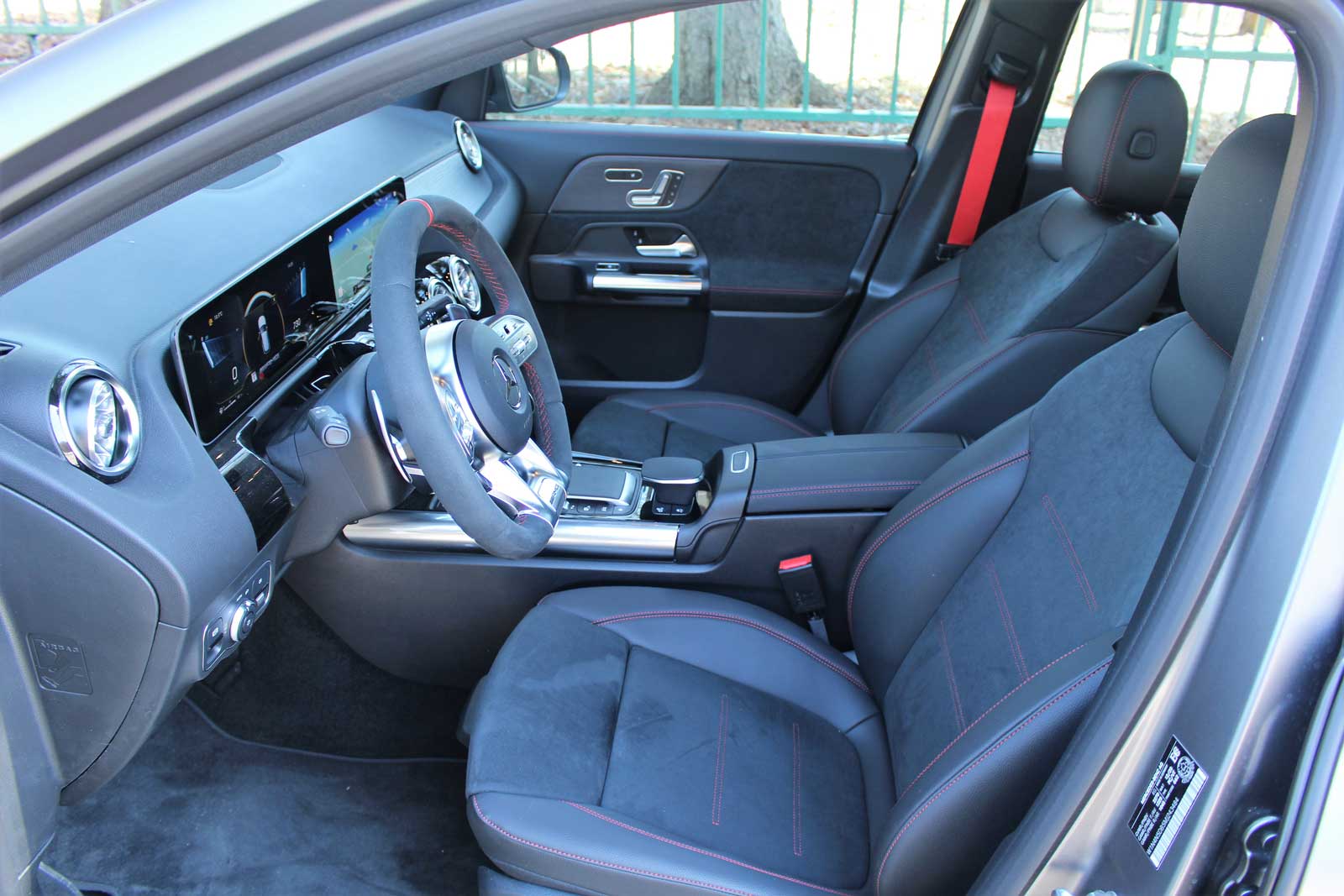 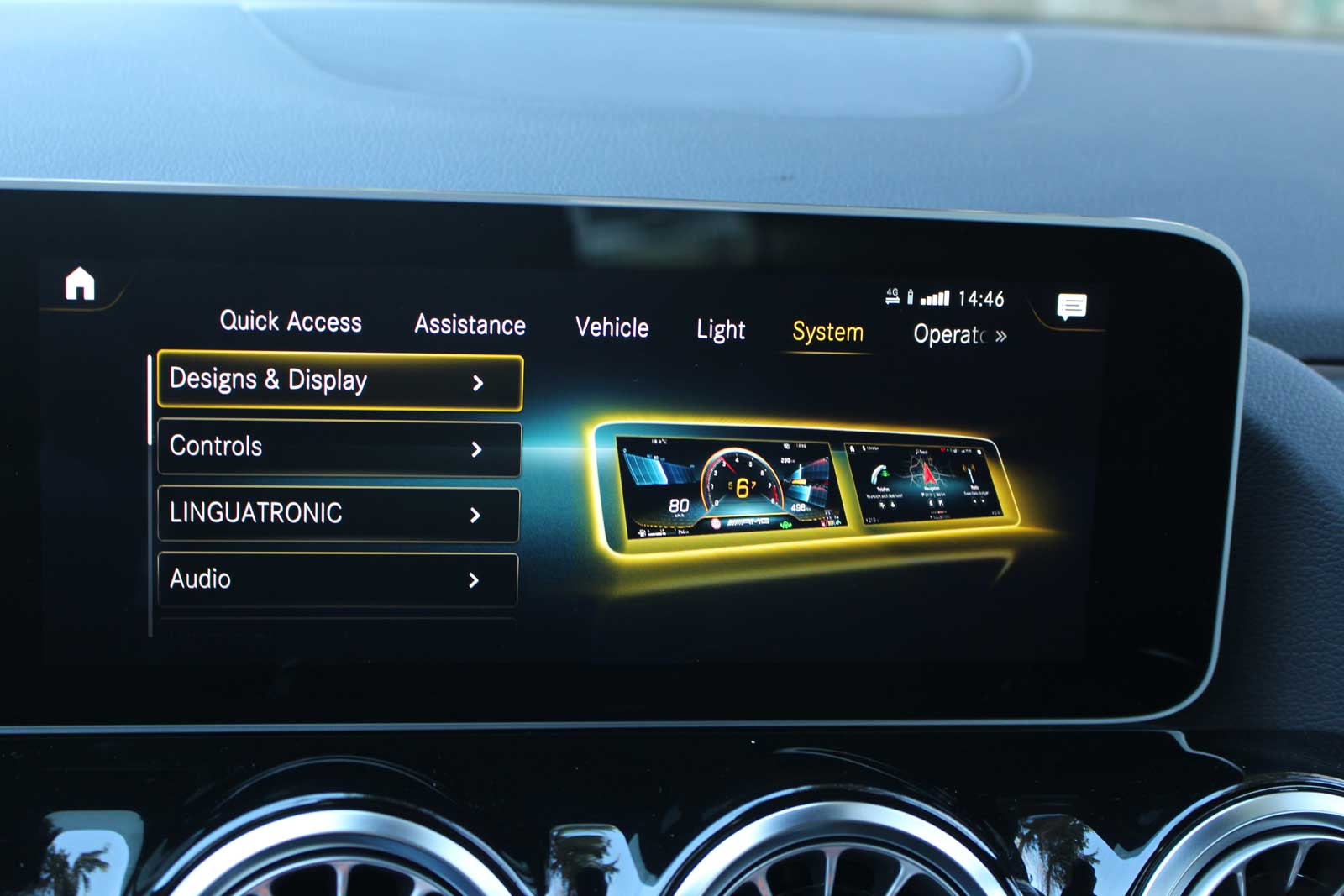 The 2021 Mercedes-AMG GLA 45 4MATIC+ is a high-performance machine that will provide plenty of grins. It’s fast, it’s loud and it’s got a mean attitude. For the price, though, and if we’re hell-bent on a subcompact, we can also take a peek at the 302-horsepower GLA 35. The latter might not be quite as speedy, but it’s thousands of dollars cheaper.

The company had previously said it had 14,000 orders, but this was misleading The FF91 was shown for the first time close to...
Read more

The new factory opened only a little over two months ago The company filed an application to purchase a piece of land next...
Read more

Polestar Teams up with StoreDot, a Company that Works to Make EV Charging Faster

StoreDot claims its batteries will be able to gain 160 kilometers of range in only 5 minutes by 2024 This is the first...
Read more
Previous article2021 Subaru Impreza Sport-tech 5-Door Review: Honest Compact Car
Next articleHyundai’s Ioniq 5 Suffering Coolant Leaks That Could Potentially Lead To A Fire