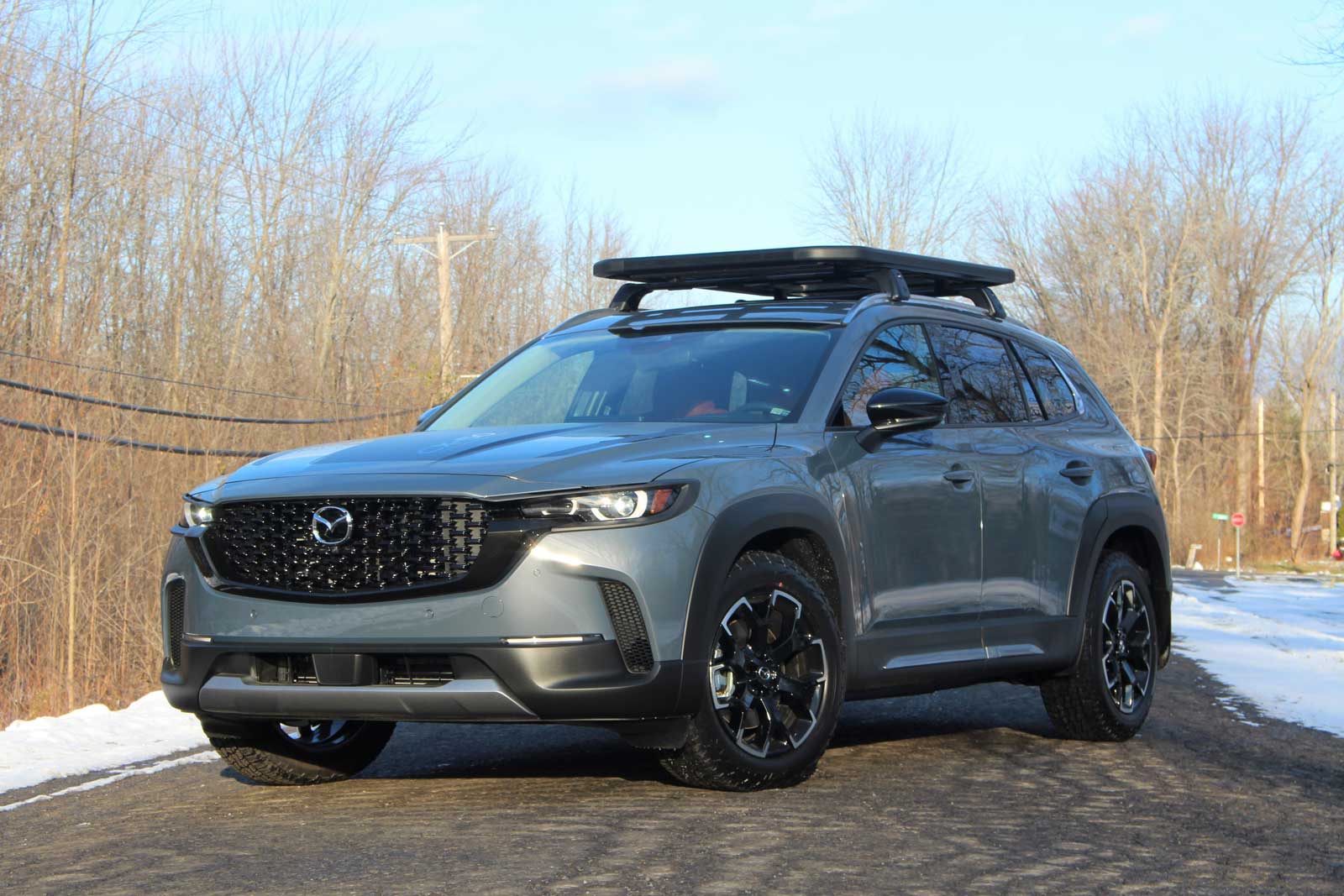 When the 2023 Mazda CX-50 first appeared in November 2021, we immediately understood the Japanese manufacturer’s willingness to move its brand upmarket. Or at least take the first steps to get there.

Obviously, the Mazda CX-30 introduced for the 2021 model year with its new numerical designation was really that first step. However, the CX-50 brings an extra splash of luxury while adding a characteristic that we haven’t seen for quite a while in Mazda’s lineup: off-road pretentions. It’s a current trend, and must be followed. 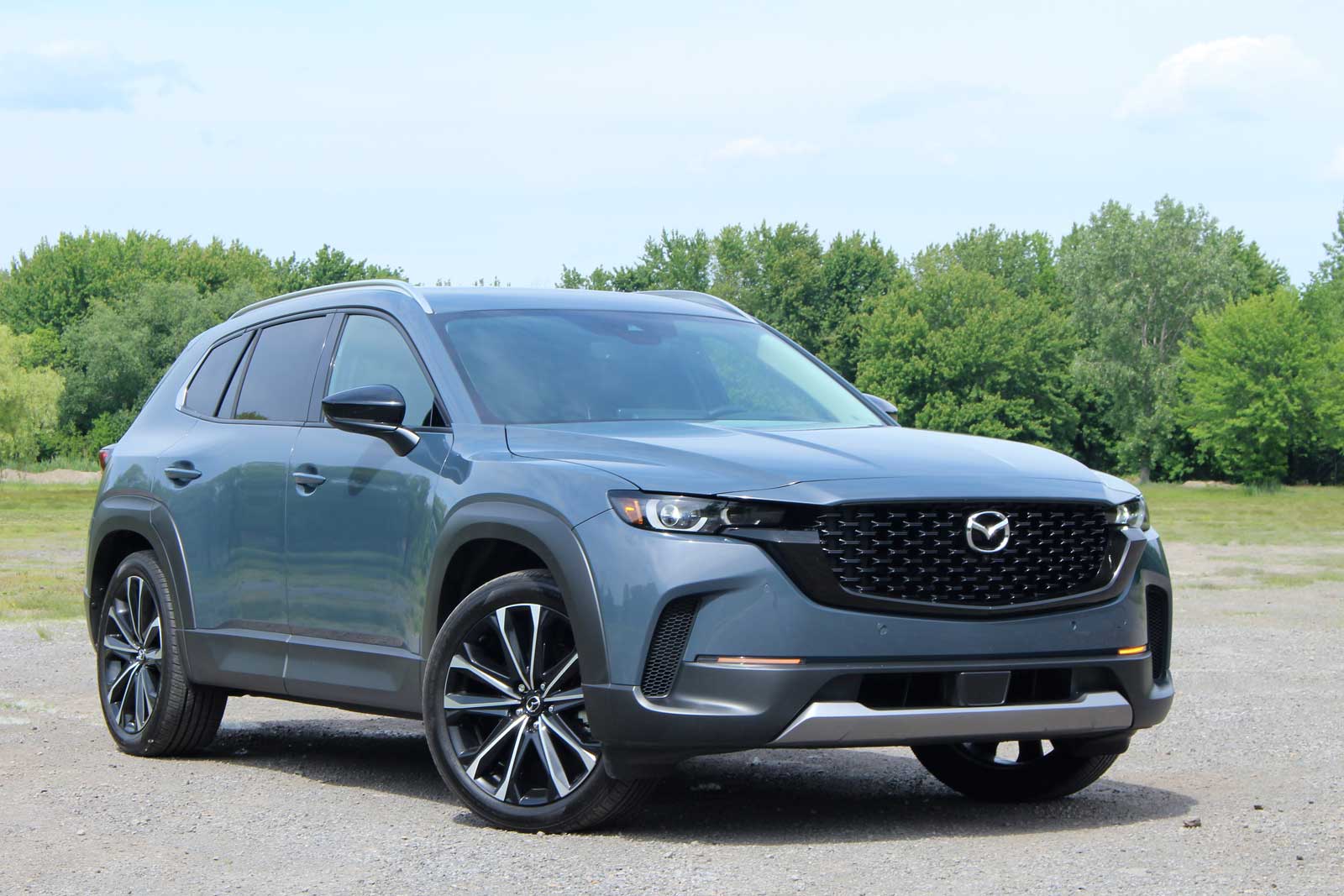 Are its off-road capacities true, or is the 2023 Mazda CX-50 just another high-riding crossover that can bring us to the cottage without being able to follow a Jeep Wrangler or a Toyota 4Runner off the beaten path? After all, the recently launched Meridian Edition serves up more ruggedness with its hood decal, its black headlight cluster bezels, its black 18-inch wheels, its Falken 225/60R18 all-terrain tires and its Terracotta brown leather interior with black accenting. It’s also available with an Apex package rounding up black roof rails, a roof rack and mud guards.

Otherwise, we get six trim levels in the U.S. and two in Canada equipped with Mazda’s naturally aspirated 2.5L four that develops 187 horsepower and 186 pound-feet of torque, sent to all four wheels via a six-speed automatic transmission. It’s a reliable powertrain, with just enough power as the CX-50 is only a few pounds heavier than the Mazda CX-5, while being slightly bigger in proportions. Surprisingly, the CX-50 is also slightly more efficient than the CX-5 with city/highway/combined ratings of 24/30/27 mpg in the U.S., and 9.7/7.9/8.9 L/100 km in Canada. Well, by a few drops. 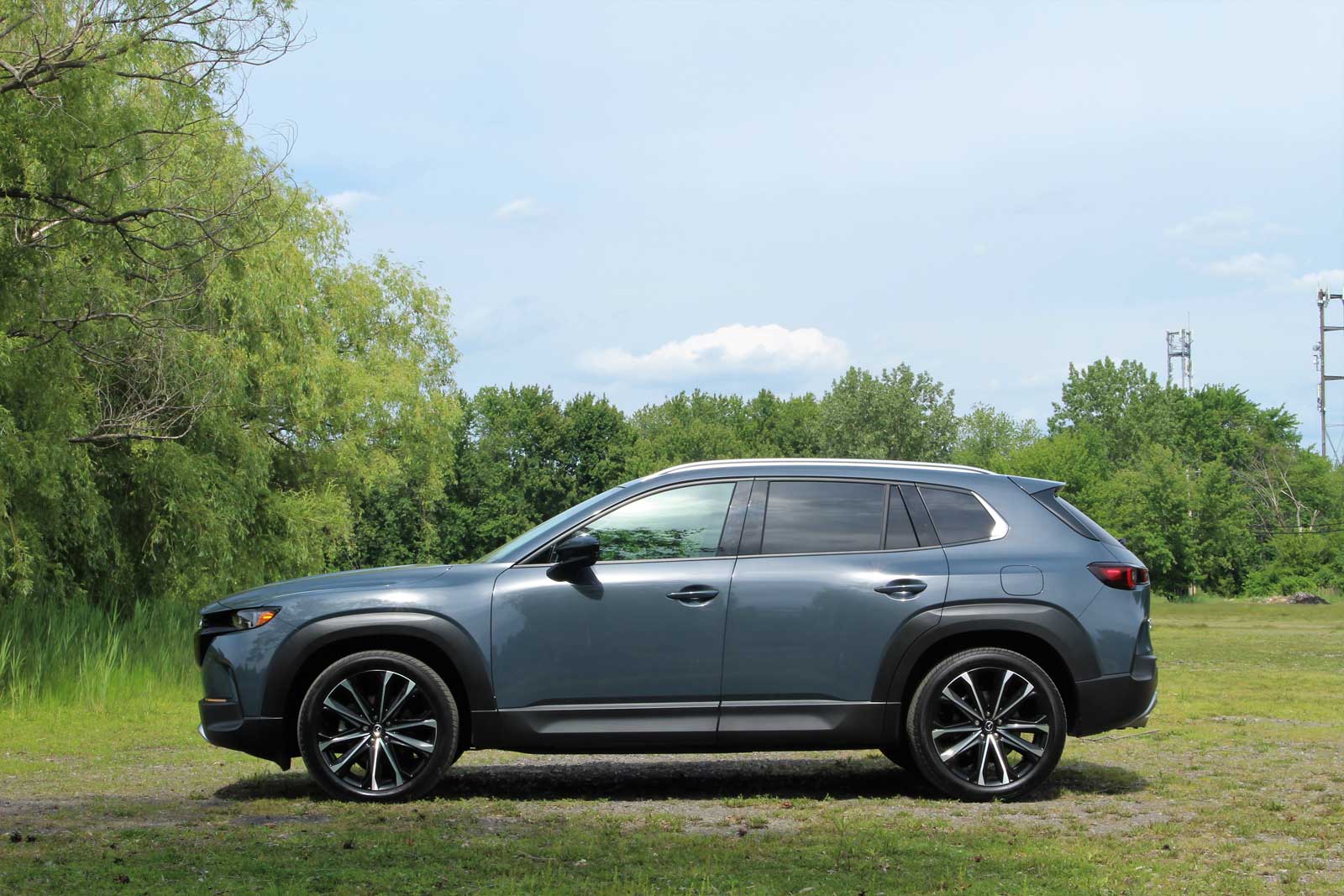 The 2023 Mazda CX-50 is also available in four U.S. trims and two Canadian trims with the turbocharged 2.5L four that belts out 227 horsepower and 310 pound-feet of torque with regular fuel, or 256 hp and 320 pound-feet with premium unleaded. In addition to offering a towing capacity of 3,500 pounds or 1,588 kilograms, the turbo mill is barely thirstier than the base engine with a combined average of 25 mpg or 9.4 L/100 km.

During our tests of the CX-50, a well-equipped turbo variant in summer and the Meridian Edition just as Old Man Winter dropped its first coating of snow on the roads, our fuel consumption ended up being in line with the official ratings. The summer test resulted in an average of 25 mpg or 9.3 L/100 km, while our average aboard the Meridian Edition was 22 mpg or 10.9 L/100 km. Two factors explain this difference, aside from the commutes driven during the two separate tests. First, the Falken all-terrain tires have less rolling resistance, which increases consumption. Also, the Apex package’s big roof rack seriously reduces aerodynamics. It also creates a fair amount of wind noise on the highway.

Regarding the roof-mounted platform, while we initially stated in this article that its carrying capacity is limited to 119 pounds or 54 kg, Mazda Canada reached out to clarify that the weight limit applies when the vehicle is moving, and that the crossbars can support up to 165 pounds or 75 kg. When stationary, the roof can support a weight of up to 675 pounds or 306 kg, and the automaker even offers a two-person tent in its accessory catalogue that can sit on top of the platform. 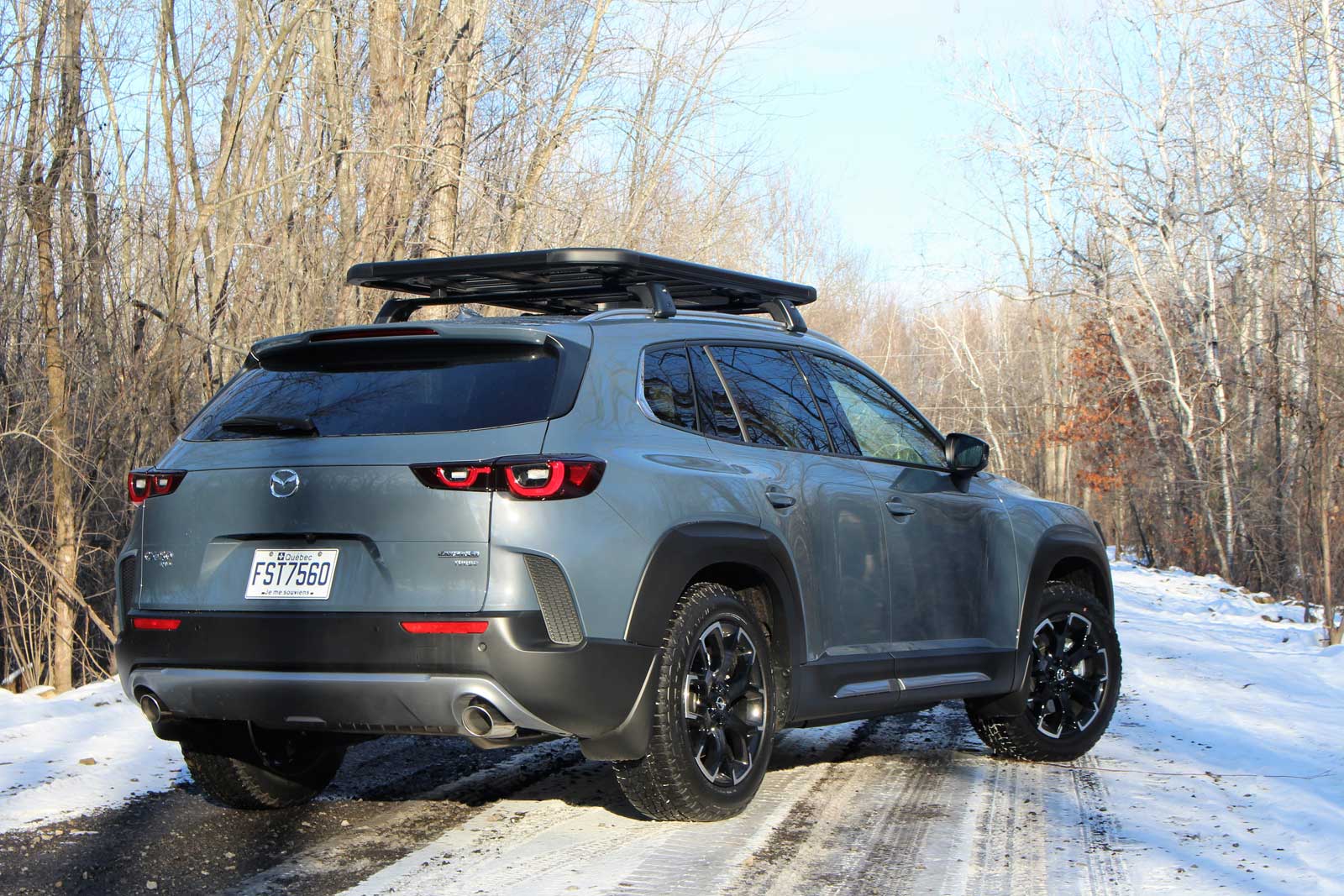 The 2023 Mazda CX-50 is priced from $28,825 in the United States and at $40,245 in Canada, freight and delivery charges included. A reasonable sum for a vehicle that comes well-equipped in all trim levels, especially in Canada where features such as rain-sensing windshield wipers with de-icers, a 10.25-inch infotainment system touchscreen, dual-zone climate control, a power-operated liftgate, heated front seats, a heated steering wheel and a slew of active safety devices.

Competitors include the Chevrolet Blazer, the Ford Edge, the Hyundai Santa Fe, the Kia Sorento, the Toyota Venza, the Volkswagen Atlas Cross Sport, the Jeep Cherokee and the Nissan Murano. 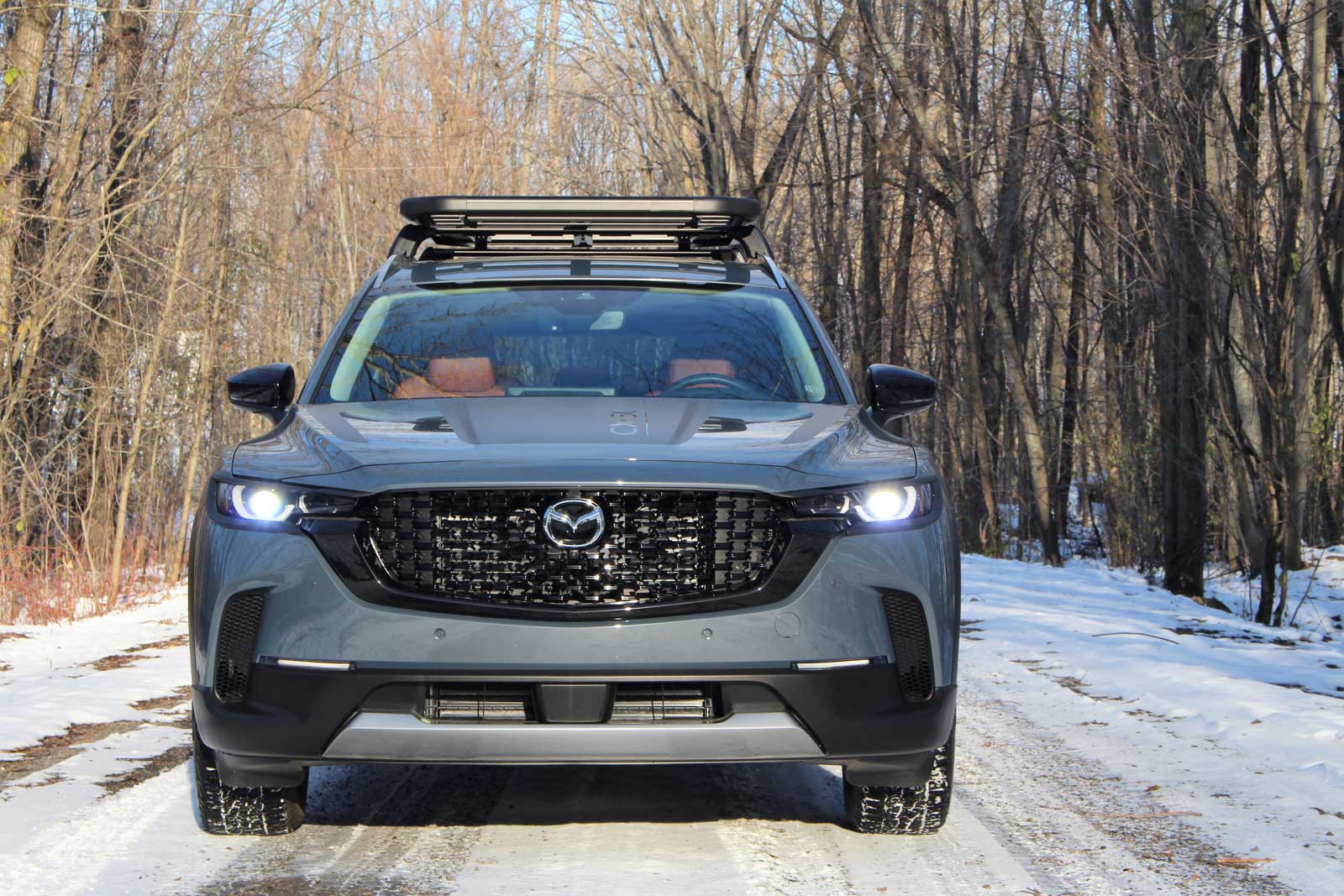 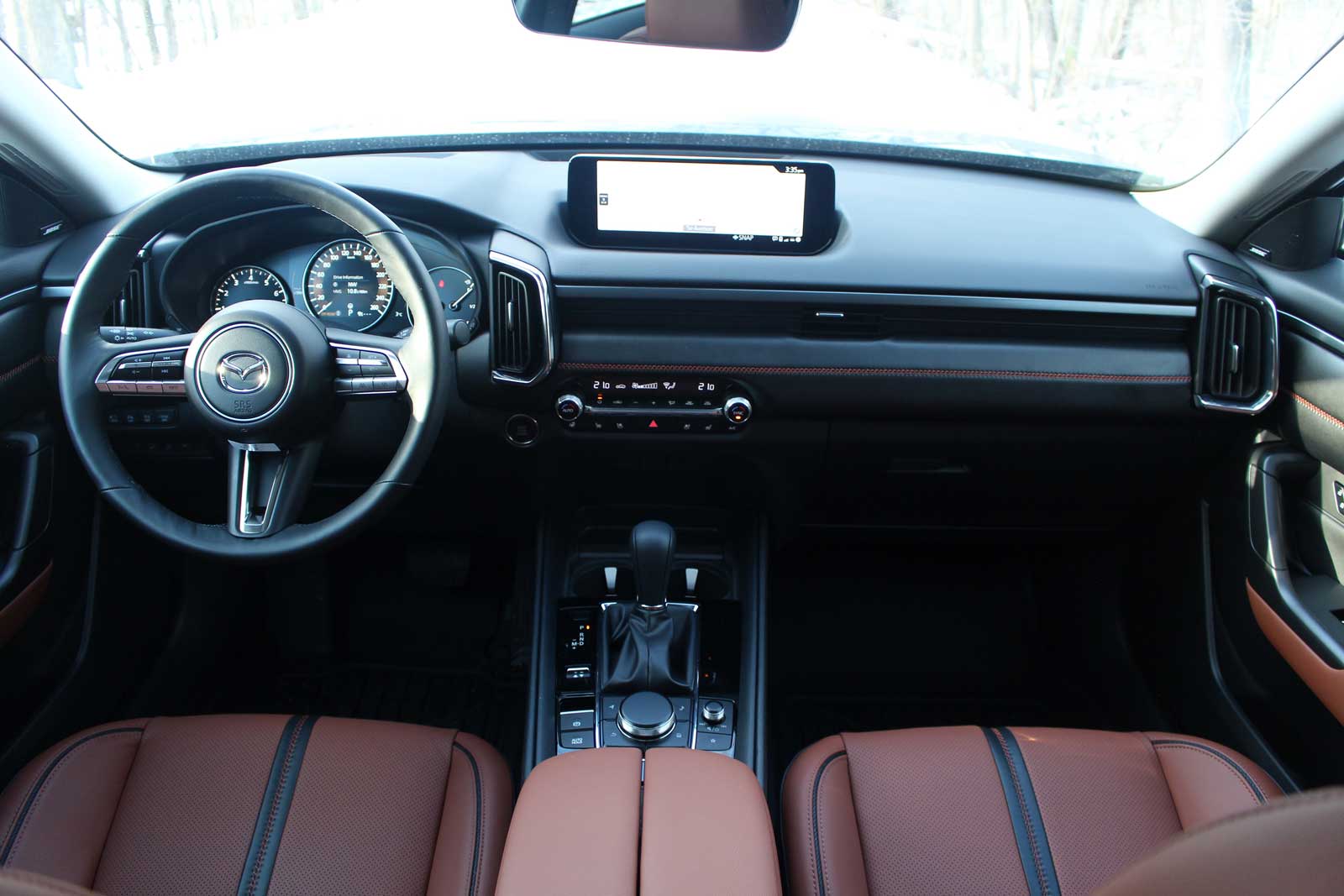 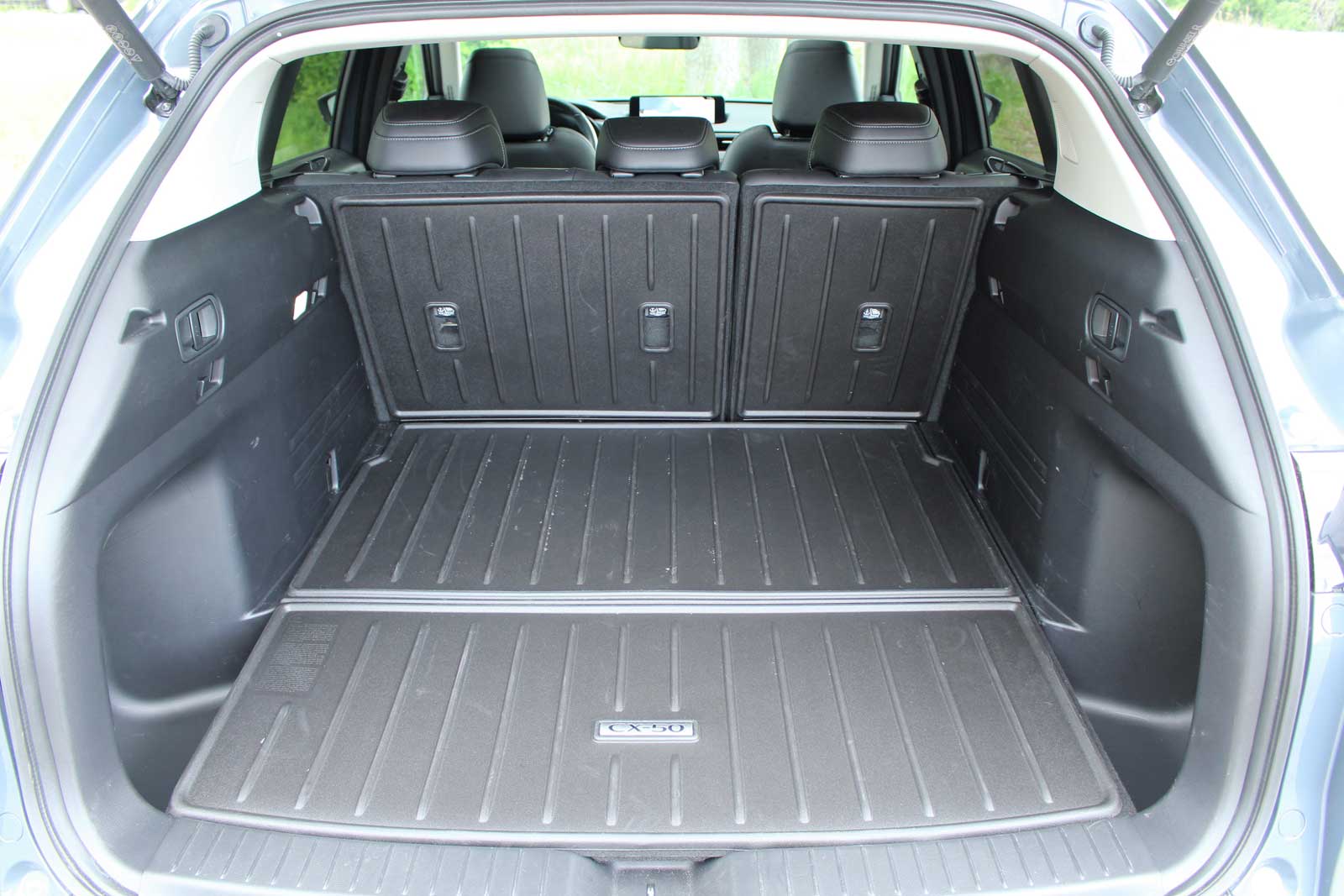 The 2023 Mazda CX-50 obviously seeks to please a crowd looking for the trendy rugged utility vehicle look while offering light off-road capabilities and good fuel economy, all at a reasonable price. The brand’s powertrains have also proven their reliability in recent years, while design inside and out is also a strong point for that emotional appeal.

However, this new crossover does have a few shortcomings. Despite being bigger, it doesn’t really offer more interior room than the Mazda CX-5, and its ride quality suffers a little as well. In addition, the turbo engine won’t get the adrenaline pumping under normal driving, even with premium fuel. While it’s still a relatively new product in Mazda’s lineup, it has a long way to go before it can replace the aging CX-5 as the brand’s volume seller, and it competes in the “small” midsize segment that seems to be losing momentum in the North American market. Still, the CX-50 can be considered a premium crossover at a mainstream brand price.

The truck’s silhouette was shown alongside high-performance electric concepts. This suggests it could have an output of over 1,000 horsepower. A production version...
Read more
Previous articleMore Details about the 2024 Porsche Macan EV Have Been Revealed
Next articleDodge Prices 2023 Hornet From $29,995 in U.S., $40,190 in Canada

The 2023 Subaru Legacy starts at $25,415 in the United States and at $34,845 in Canada, freight and delivery charges included. Comfortable cabin,...
Read more
Should-you-buy