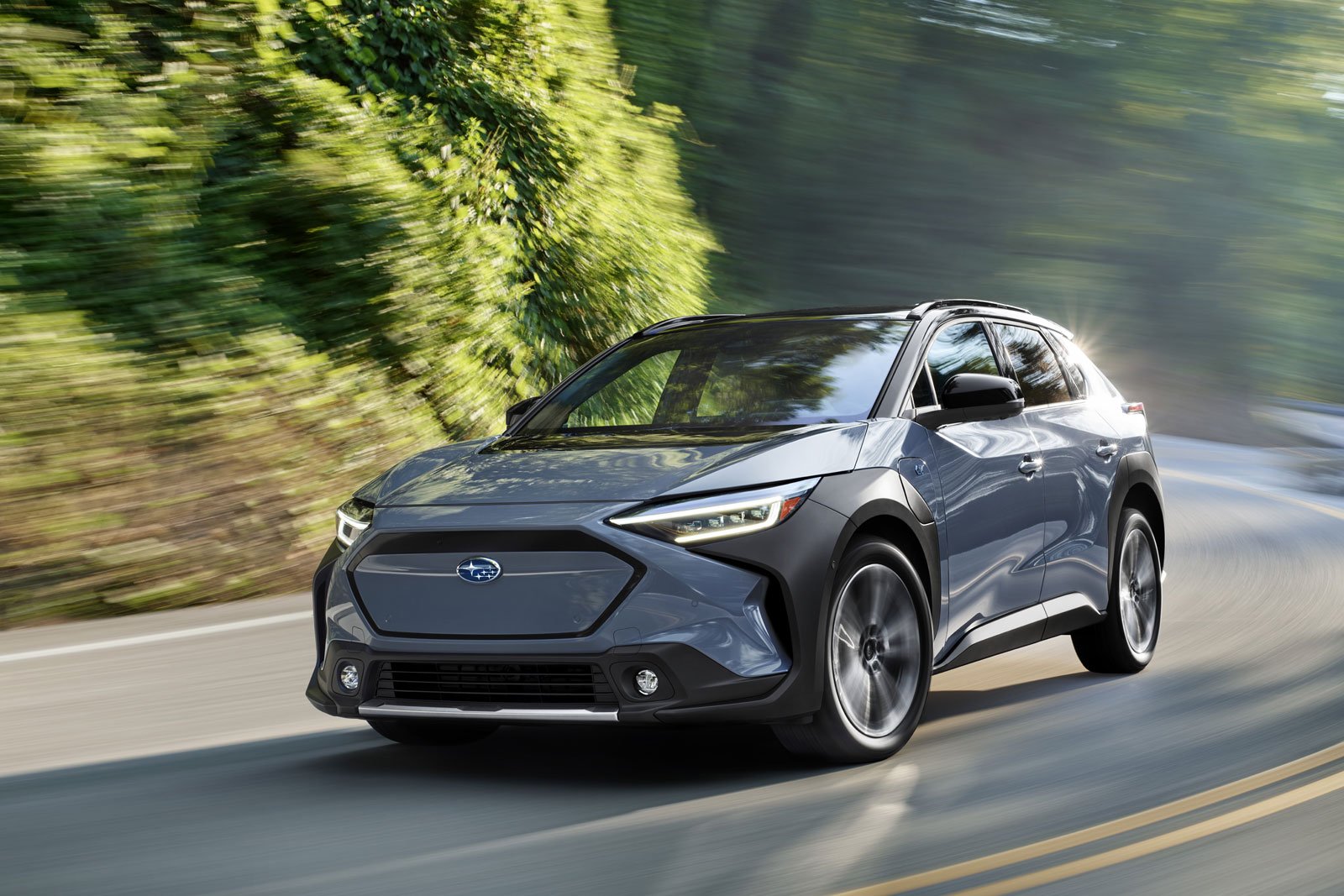 Business is chugging along at Subaru, with decent sales numbers, redesigned models in the pipeline and, just like pretty much every other manufacturer, limited dealer inventory resulting in good profits due to reduced incentives.

Nevertheless, the Japanese brand is about to launch its first EV for North America, in addition to refreshing some of its popular vehicle lines. Here’s what to expect from the Subaru brand in 2023, with models listed in alphabetical order.

The three-row, midsize Subaru Ascent crossover gets a mid-cycle refresh with revised front and rear fasciae, an improved EyeSight system and a 360-degree camera system, while wireless Apple CarPlay and Android Auto integration on an 11.6-inch infotainment touchscreen are now standard across all trim levels. A new Cabin Connect intercom system allows front-seat passengers to be heard through the vehicle’s speaker system, which tour guides will appreciate. Also, the available navigation system now incorporates what3words geolocation tech. All trim levels are equipped with a turbocharged 2.4L flat-four engine that develops 260 horsepower and 277 pound-feet of torque, matched to a continuously variable automatic transmission and all-wheel drive.

The second-generation Subaru BRZ was introduced for the 2022 model year, and there are no changes for 2023. The rear-wheel drive, pint-sized sports car is equipped with a naturally aspirated 2.4L boxer four developing 228 horsepower and 184 pound-feet of torque, connected to a six-speed manual or a six-speed automatic. The BRZ is available in Premium and Limited trim levels in the U.S., in base and Premium trims in Canada. Only units equipped with the automatic transmission receive the Subaru EyeSight active safety suite.

The Subaru Crosstrek gets virtually no changes for the 2023 model year, as an all-new generation of the subcompact crossover will arrive for 2024. However, the U.S. market does get a Premium Special Edition variant with an exclusive paint colour called Desert Khaki, and is equipped with all of the Premium trim level’s features, while adding the bigger 8.0-inch infotainment touchscreen. Three powertrains are offered in the Crosstrek, including a 152-hp 2.0L four, a 182-hp 2.5L four and a plug-in hybrid system consisting of a 2.0L engine with an electric motor, good for a combined 148 hp and an EV-only driving range of 17 miles in the U.S. and 27 km in Canada.

The Subaru Forester received some changes for 2022, including a new Wilderness Edition, so the 2023 model year is a quiet one for the compact crossover. All Forester trim levels are equipped with a 182-horspower, 2.5L flat-four and a continuously variable automatic transmission, in addition to standard all-wheel drive. 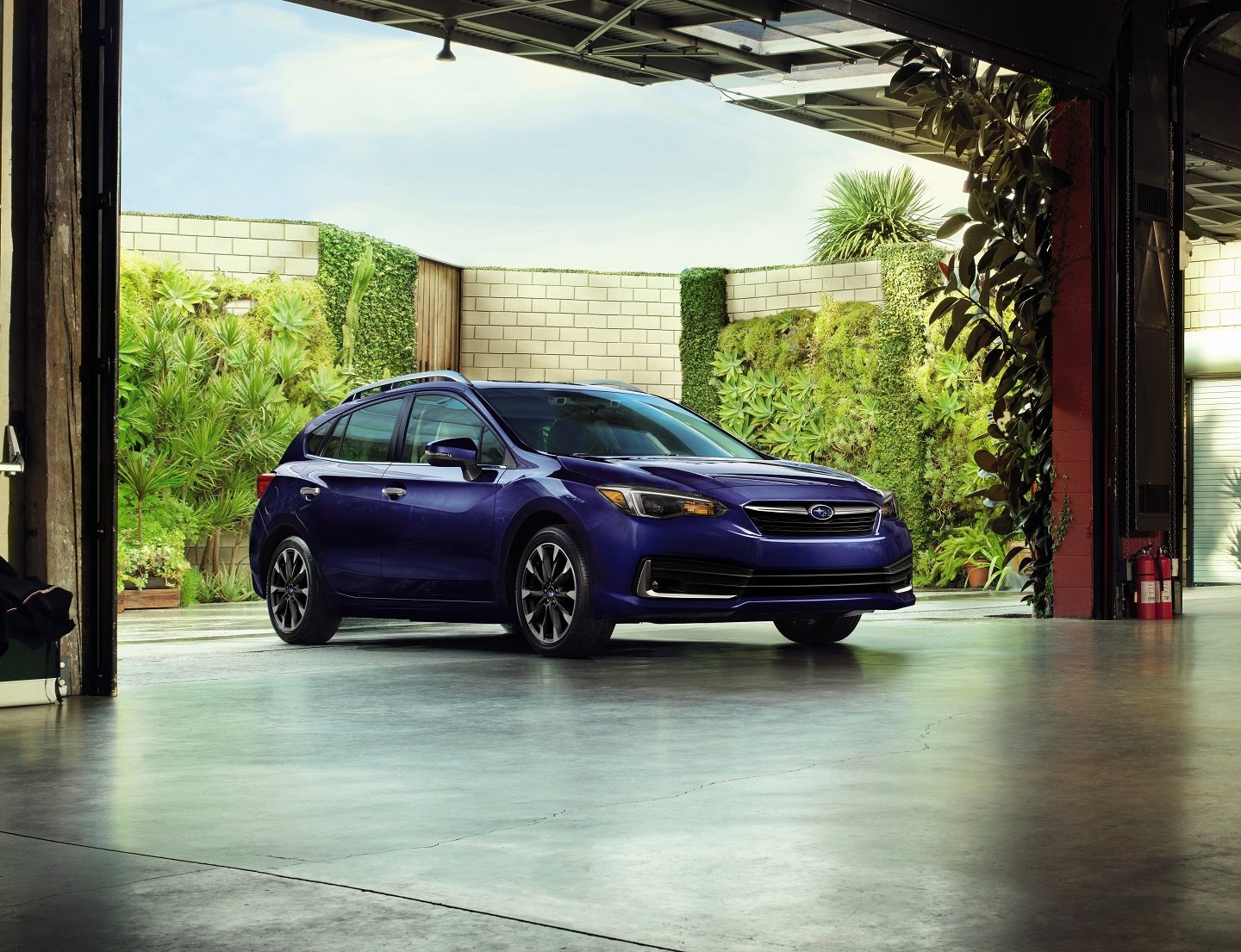 In the U.S., the 2023 Subaru Impreza is still available in four-door sedan and five-door hatchback body styles, with the only engine choice being a 152-horsepower 2.0L flat-four matched to a manual or automatic transmission. AWD is standard is also standard across the board. In Canada, the sedan has been canned, leaving only the five-door hatchback Impreza in the lineup. The Canadian also gets less paint colours to choose from.

As with the Ascent, the 2022 Subaru Legacy gets a mid-cycle refresh, boasting a redesigned front end and receiving the latest version of the EyeSight active safety package. A new dual-diagonal brake system has been fitted, which is linked to the EyeSight system to improve responsiveness in emergency situations. Now living up to its name, the U.S.-market Sport trim level is now equipped with a sport-tuned suspension and the turbocharged 2.4L flat-four that develops 260 horsepower and 277 pound-feet of torque, which is also found in the range-topping Touring XT—the latter now offering Java Brown or Slate Black interior colours. In Canada, the Legacy sedan’s base Convenience variant is gone while the Limited GT and Premium GT were streamlined into one GT trim that’s equipped with the turbo engine. All other trim levels feature a 182-horsepower, 2.5L four. In both countries, wireless Apple CarPlay and Android Auto are now included in the uplevel infotainment system with the 11.6-inch touchscreen—which is said to feature revised climate control and audio button zones along with what3words for the navigation system. 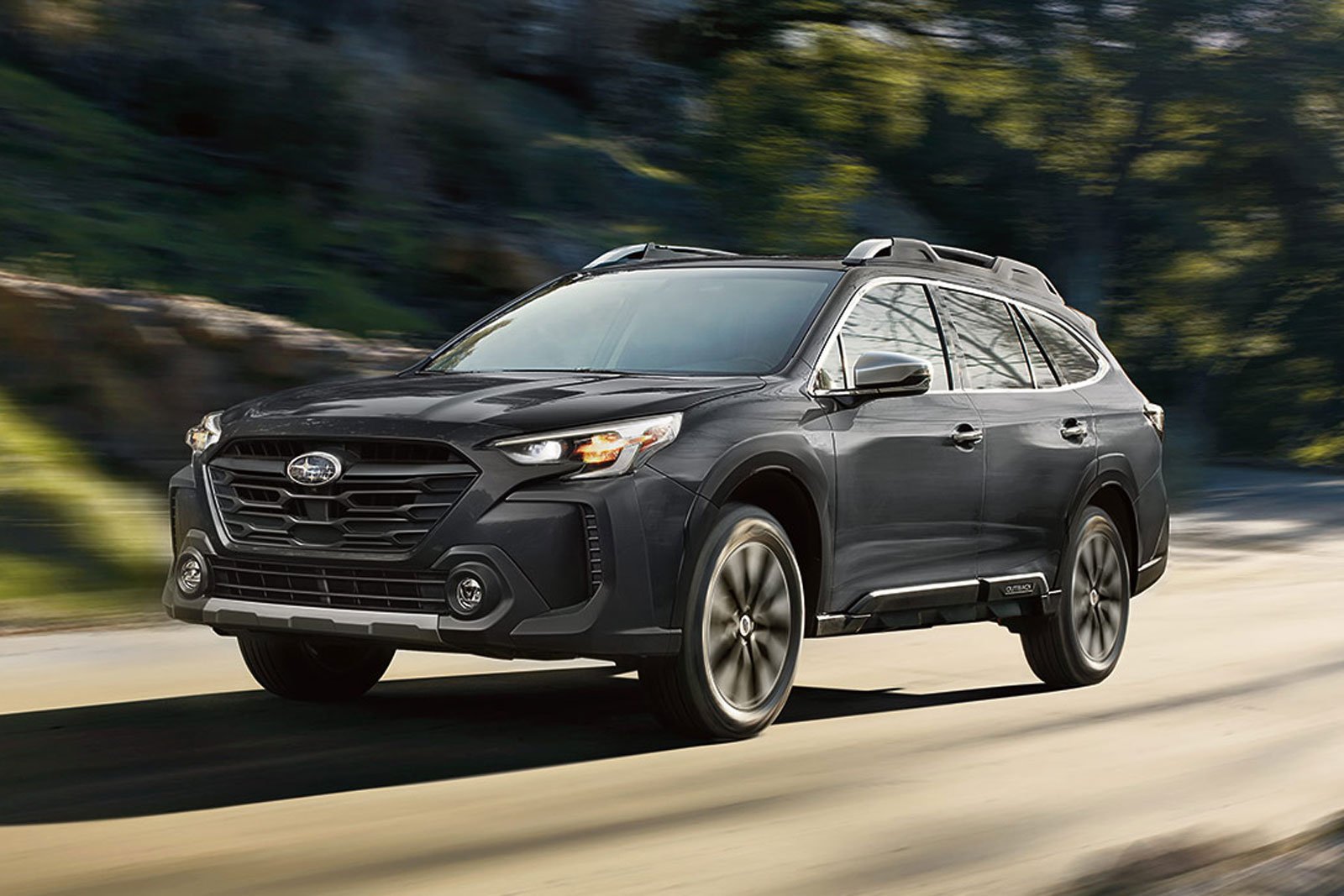 After gaining a Wilderness Edition last year, the Subaru Outback gets a styling refresh for 2023, extending to the front fascia and the bodyside cladding. The Outback receives the same EyeSight, braking system and infotainment system improvements as the Legacy, and there’s a new Onyx Edition for both the U.S. and Canada, equipped with the 182-horsepower 2.5L flat-four that’s also found in the lower half of the trim level lineup. The upper half benefit from the turbocharged 2.4L four with 260 horsepower. The U.S.-market Onyx Edition XT gets a standard power moonroof, the U.S. Limited and Touring  variants get front-seat power lumbar support, while the heated steering wheel is actually heated all around its rim. A camera-based rearview mirror is now available. 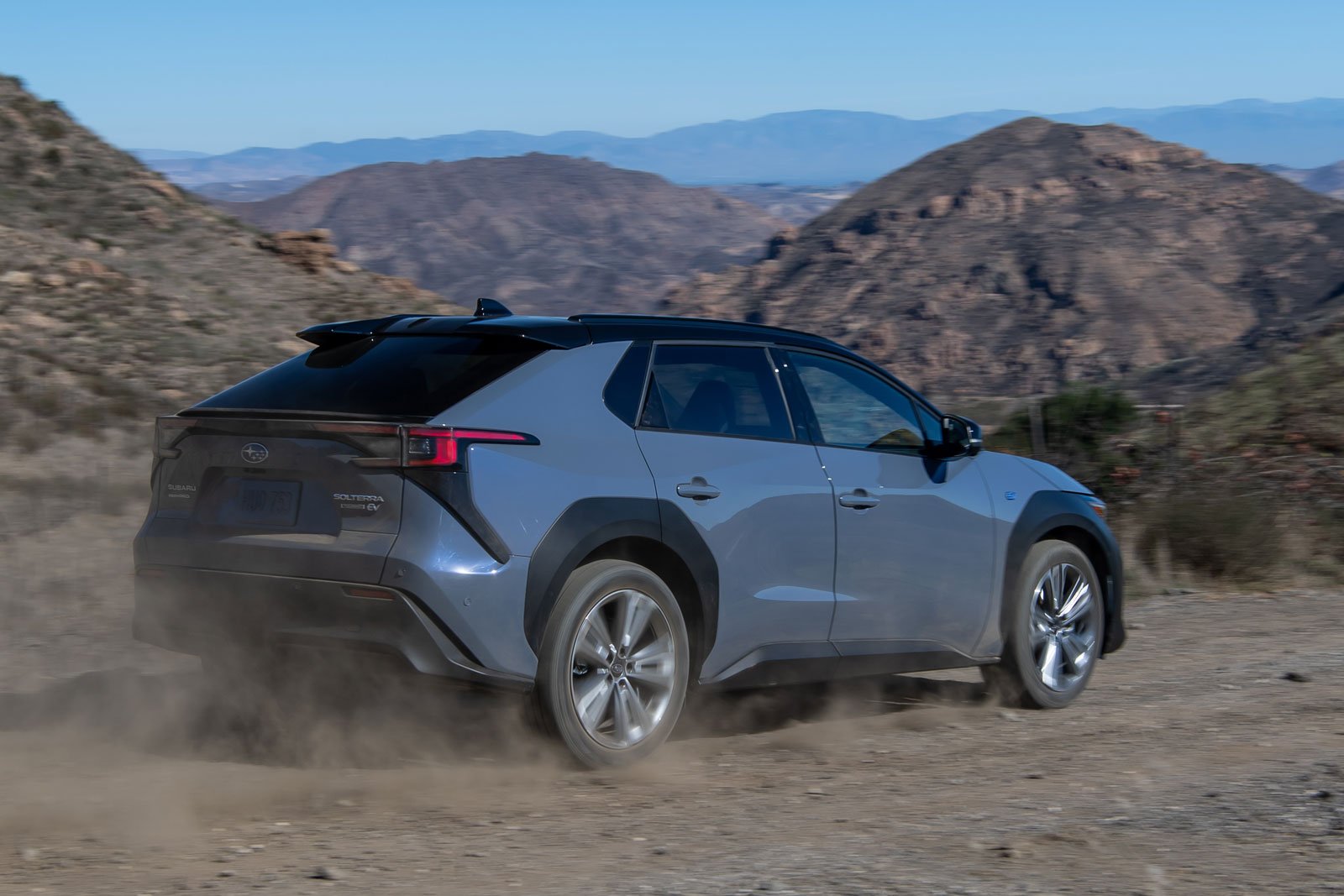 The 2023 Subaru Solterra made its North American debut at the Los Angeles Auto Show in November 2021, and reservations are now open in the United States for all its trim levels: Premium ($44,995), Touring ($48,495) and Limited ($51,995). Its electric powertrain develops 215 horsepower and 249 pound-feet of torque, and thanks to its 72.8 kWh battery pack, driving range is estimated at 228 miles or 367 kilometres for the Premium trim, 222 miles or 357 km for the Touring and Limited trims. Engineered with the help of Toyota, the Solterra is about the same length as the Subaru Forester, but rides on a longer wheelbase and has a slightly lower roofline. Pricing for the Solterra in Canada has been set at $54,295 before freight and delivery charges for the base trim level, $58,395 after adding the Luxury Package and $62,095 after adding the Technology Package.

The new-generation 2022 Subaru WRX debuted in September 2021, boasting a turbo 2.4L flat-four with 271 horsepower and 258 pound-feet of torque, paired with either a six-speed manual or a continuously variable automatic, or what the company calls the Subaru Performance Transmission. All-wheel drive is obviously standard. The WRX is available in four trim levels in the United States, three in Canada.  No changes have been announced so far for the 2023 model year, and there is still no WRX STI variant, either.

Elon Musk says the first units will be built this summer, with full-scale production next year. The specifications and price of the electric...
Read more
Previous articleFord Currently Has Close to 45,000 Unfinished Cars Waiting Around
Next article2022 Subaru WRX vs. 2022 Volkswagen Jetta GLI Comparison