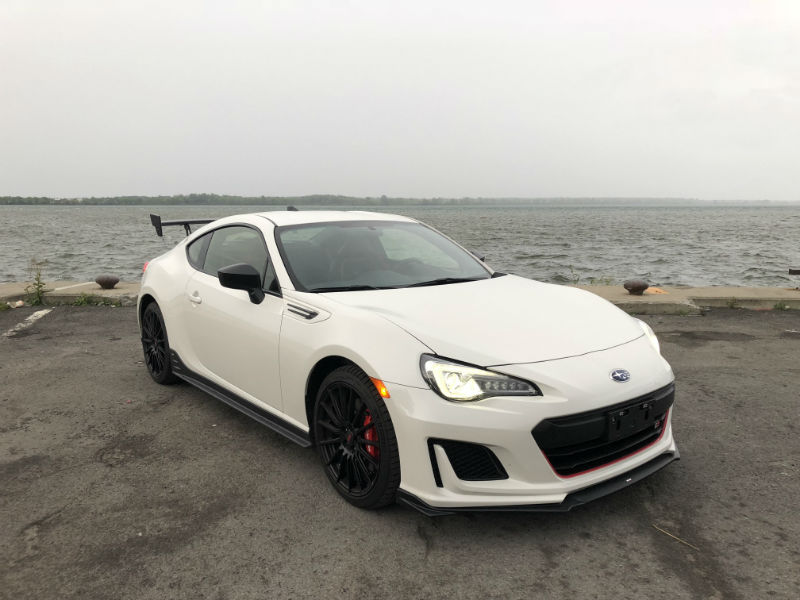 The spoiler. That huge rear spoiler. On a 205-horsepower car? What the heck for? To slow it down? To use as a table when having lunch at a car show? I believe I’m going through a mid-life automotive crisis. I’d had my “man” mid-life crisis already: she’s seven years younger than I, hotter than summer’s been in the UK, she loves cars and has more tools than I do. No, this is a true crisis of the “I’m getting old” kind.

That spoiler though, it calls my name. Says the sweetest things to me like: “Remember when this is all you wanted in a car? That, and more power, and the stiffest possible ride?” There was a time when I’d modify my cars to within an inch of being undriveable. When I walked up to the BRZ, emotions of a simpler dumber time flared in my soul. Up until my early 30s, the most powerful car I’d ever owned was 145-horsepower 1989 Mazda MX-6 GT. It was quick, much like the BRZ is, but it could never come within a Solar System of it handling-wise.

That same spoiler looks completely risible – it’s a bad joke. Does the already excellent-handling Subaru BRZ really need such an over-the-top ricer accessory? While the 22-year old me would have been proud to drive off in the car, the 42-year old was a little embarrassed.

Having said that however, minutes into the first drive, I’d already regressed back 20 years. I was basking in the chassis’ incredible level of mechanical grip, SACHS dampers, STI coil springs and superb Michelin Pilot Sport 4 tires. These added elements heighten the BRZ’s near telepathic handling abilities to a point where speed is nearly irrelevant when negotiating corners and curves. The trick is you must have the skills and courage to see it through. 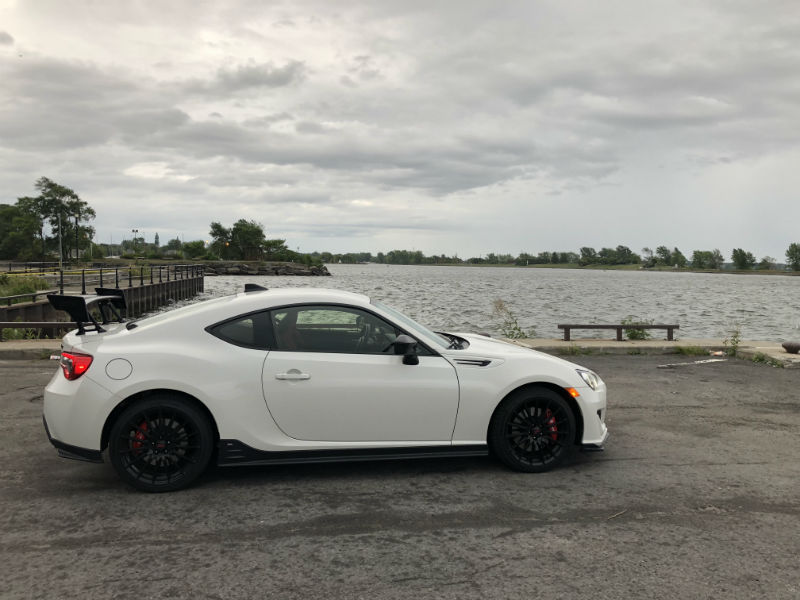 Working the trigger-like clutch, shifter and steering require a good level of dexterity in order to get it right. Once the fear is gone, and the hands and feet have mastered their elements, the BRX tS becomes a formidable weapon. This is a seriously fast car. On top of this, the car’s low 1,289 kg weight means that braking is a last-ditch maneuver in order to get ahead. If you do stomp on the middle pedal, the larger discs scrub speed in an instant. Getting back up to speed will lose you precious time.

No, I did not discover this on the highway near my home – I’ve tracked these cars (BRZ, FR-S, 86) in the past.

What am I saying? The Subaru BRZ tS is one of the last true driving cars where performance and speed are earned. There are no massive turbochargers, gargantuan street-block wide tires, or pizza-plate-sized brakes, there’s only you, the car and the next apex. You’ll never win a drag race, but you will humiliate cars with twice the hp on a track if you’ll allow the car to do what it was designed to do.

The 2019 crash killed two occupants in a Honda Civic. These are the first felony charges handed down following a fatal crash involving...
Read more
Previous article2019 Acura NSX showcased at Monterey Car Week
Next articleShelby SuperCars is back with the 1,750-horsepower Tuatara