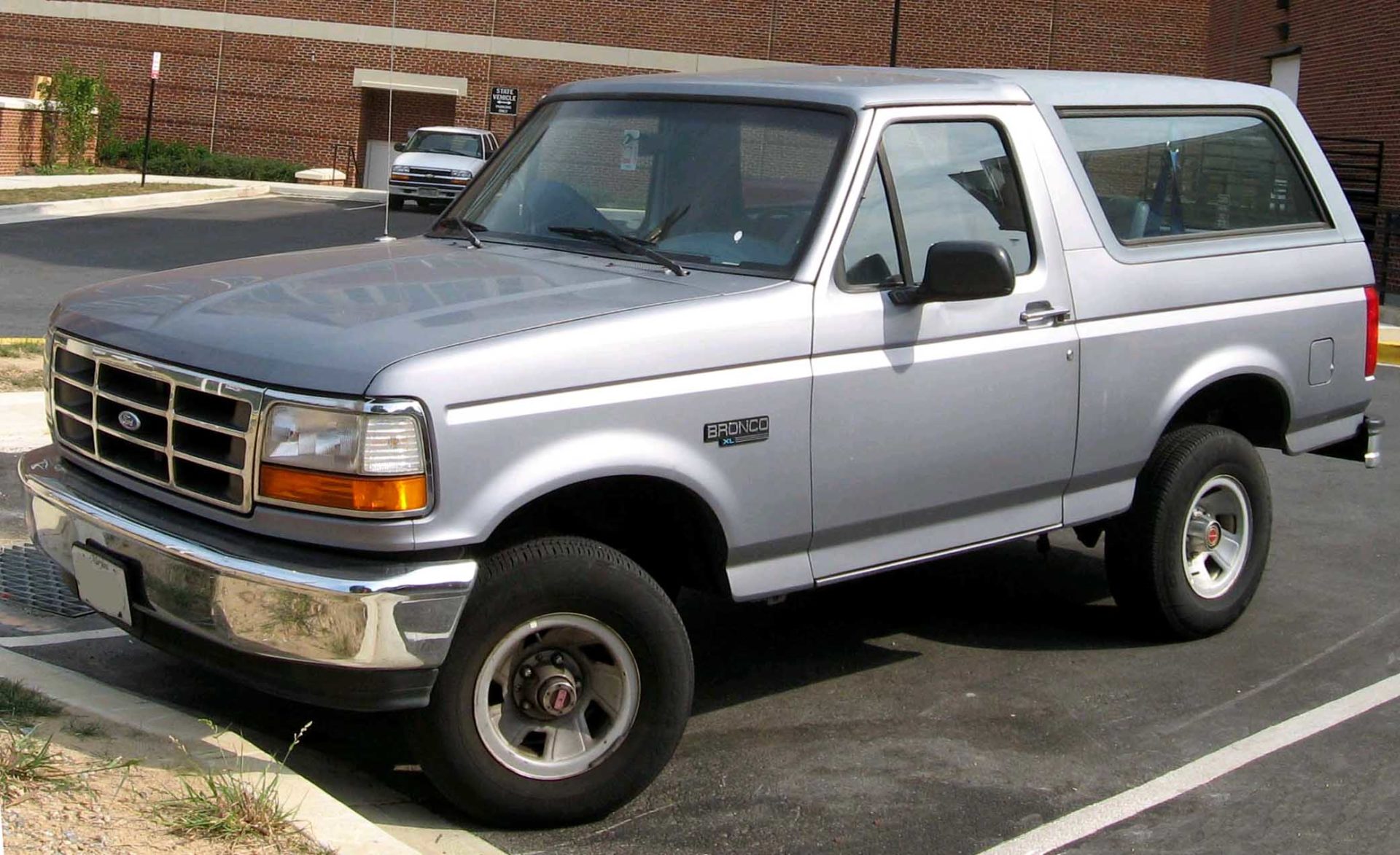 The new 2020 Ford Bronco is one of the most anticipated models of the upcoming year, that much is certain. We have very little information about the new-generation Bronco as of yet, but any little tidbit of information tends to become news. The fact that it won’t be available as a right-hand drive model, for instance, is making headlines as I’m writing this.

Ford has so far given us exactly 5 lines on the upcoming Bronco. Aside from calling it “legendary” and “iconic”, Ford has only stated that it will be a mid-size SUV and that it will be rugged. The Bronco began as a hardcore off-road vehicle and it’s only fitting that it will return as one, albeit one that will likely also have features like automatic braking and rear cross-traffic alert. Hey, you’ve got to keep up with the times.

As we impatiently await any additional info on the 2020 Bronco, let’s take a closer look at the five generations that preceded it from 1965 to 1996.

The first Ford Bronco was the work of Ford product manager Donald Frey who wanted a rugged off-road vehicle to take on the likes of the Jeep CJ-5 and the International Scout. The original Bronco has its own unique chassis and every version came with four-wheel drive.

An inline-6 developing 105 horsepower was joined by by a 200-horsepower V-8 option a few months after the Bronco went on sale. The eight-cylinder engine got a power boost in 1969. A 3-speed column-mounted manual gearbox was the only available transmission up until 1973 when a 3-speed automatic was made available as an option. Lastly, the Bronco was offered in three body styles including a two-door convertible roadster. 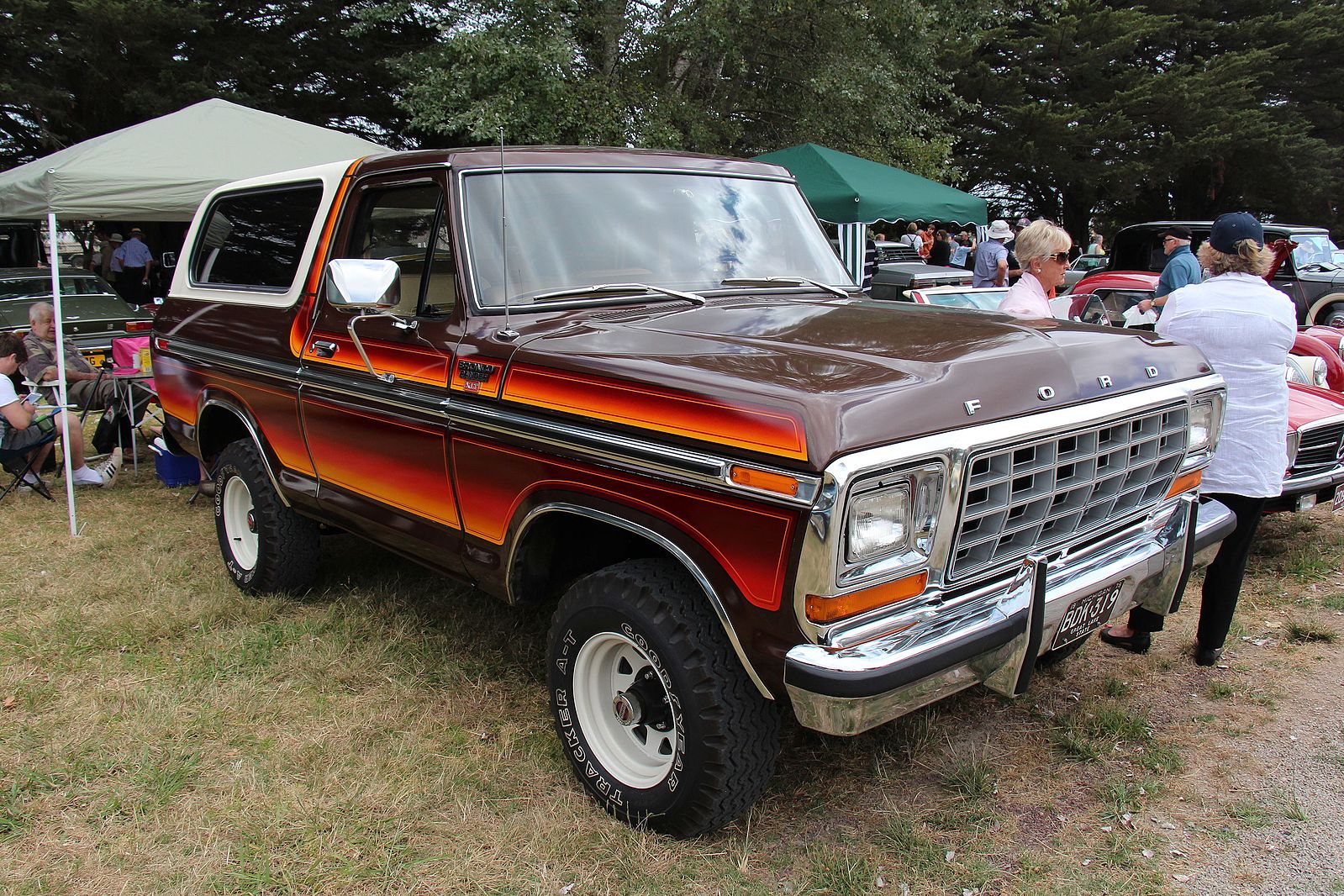 The second-generation Ford Bronco was introduced 12 years after the original. The competition had evolved and now included the Jeep Cherokee and Dodge Ramcharger along with the Chevrolet Blazer.

Despite the downsizing trend of the 1970s, the Ford Bronco actually grew in size when it was introduced as a 1978 model. It was larger in every way and was only offered with a V-8 engine. Based on the Ford F-100 pickup’s chassis, the second-gen Bronco was only offered as a 3-door wagon with a removable rear hardtop. For the first time in a Bronco, the rear window could be rolled down into the tailgate. 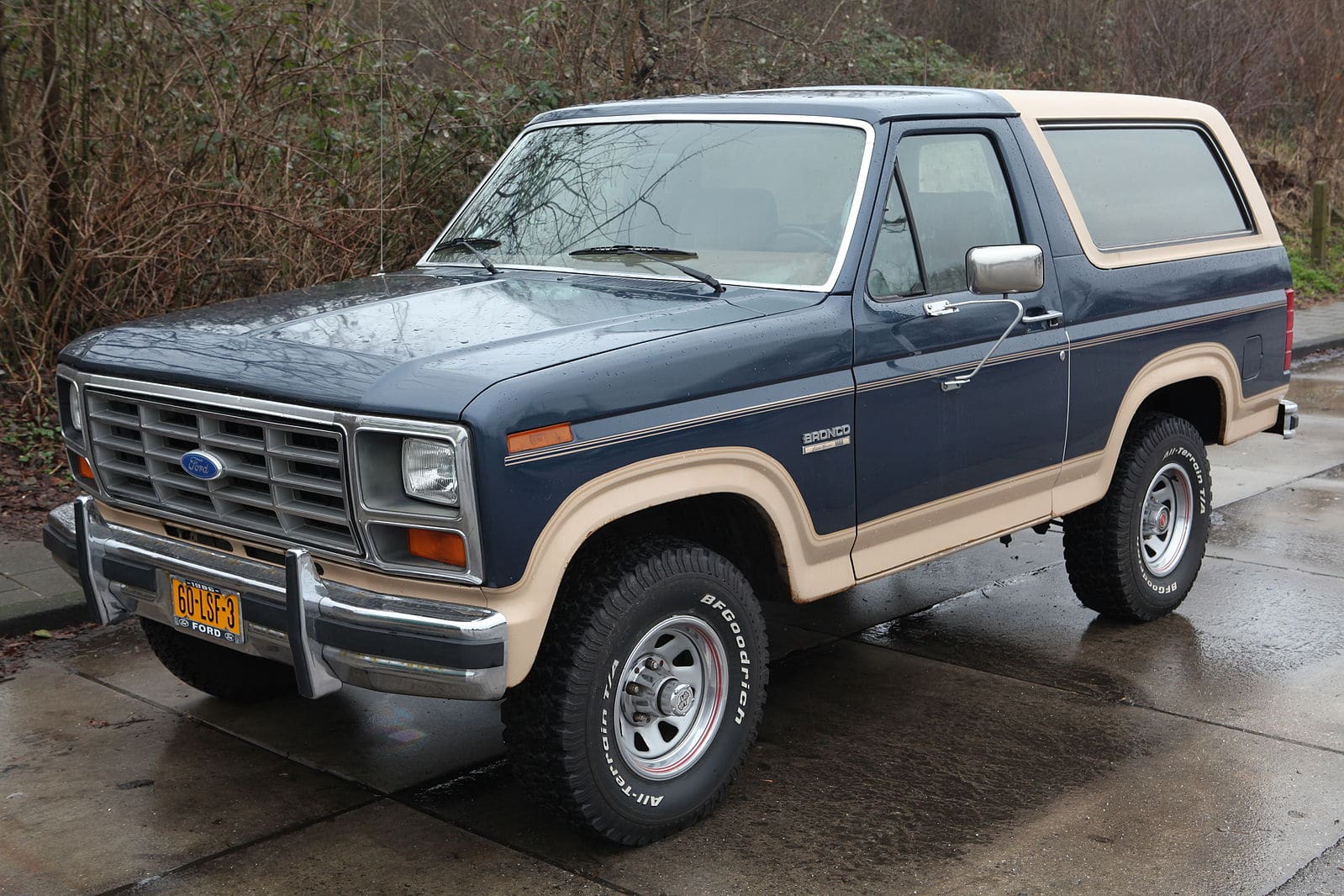 The Bronco got smaller in the 1980s. As a matter of fact, the Bronco II introduced in 1982 was about the same size as the original Bronco of the 60s. The third-generation Bronco also brought back the inline-six engine.

Visually, this Bronco was the first to feature the Ford blue oval upfront and in 1985 it was offered for the first time with an Eddie Bauer trim. 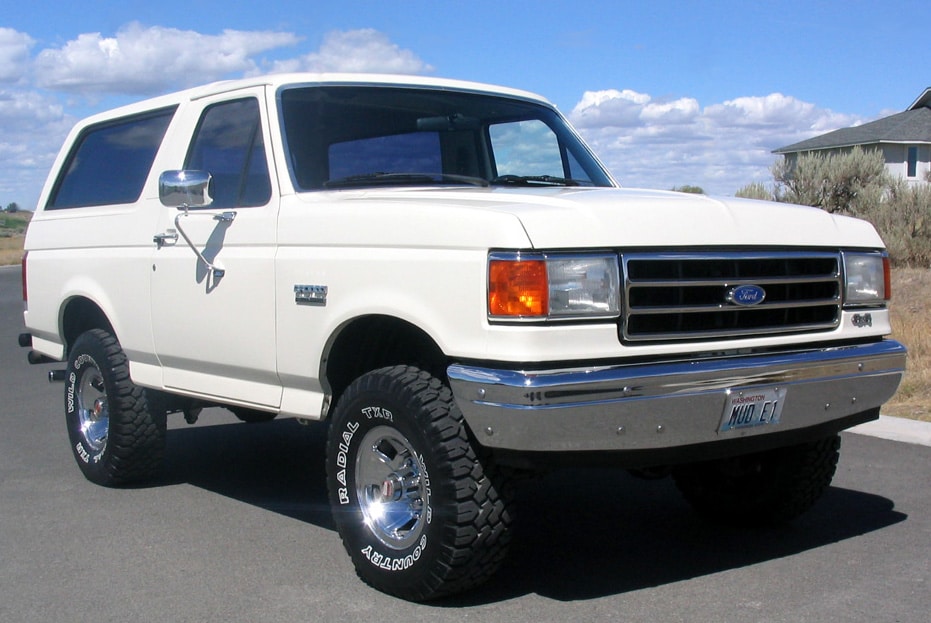 This Bronco shared a lot of similarities with the Ford F-150. It also got improved safety features such as standard rear ABS brakes. Push-button controls for the four-wheel drive system were also added to the Bronco. Buyers could get a 4.9-liter inline-six, a 5.0-liter V-8 or a 5.8-liter V-8 under the hood of their Bronco.

The 3-speed automatic gearbox got an extra gear as did the 4-speed manual. A Silver Anniversary Edition was offered to celebrate the model’s 25th birthday in 1991. 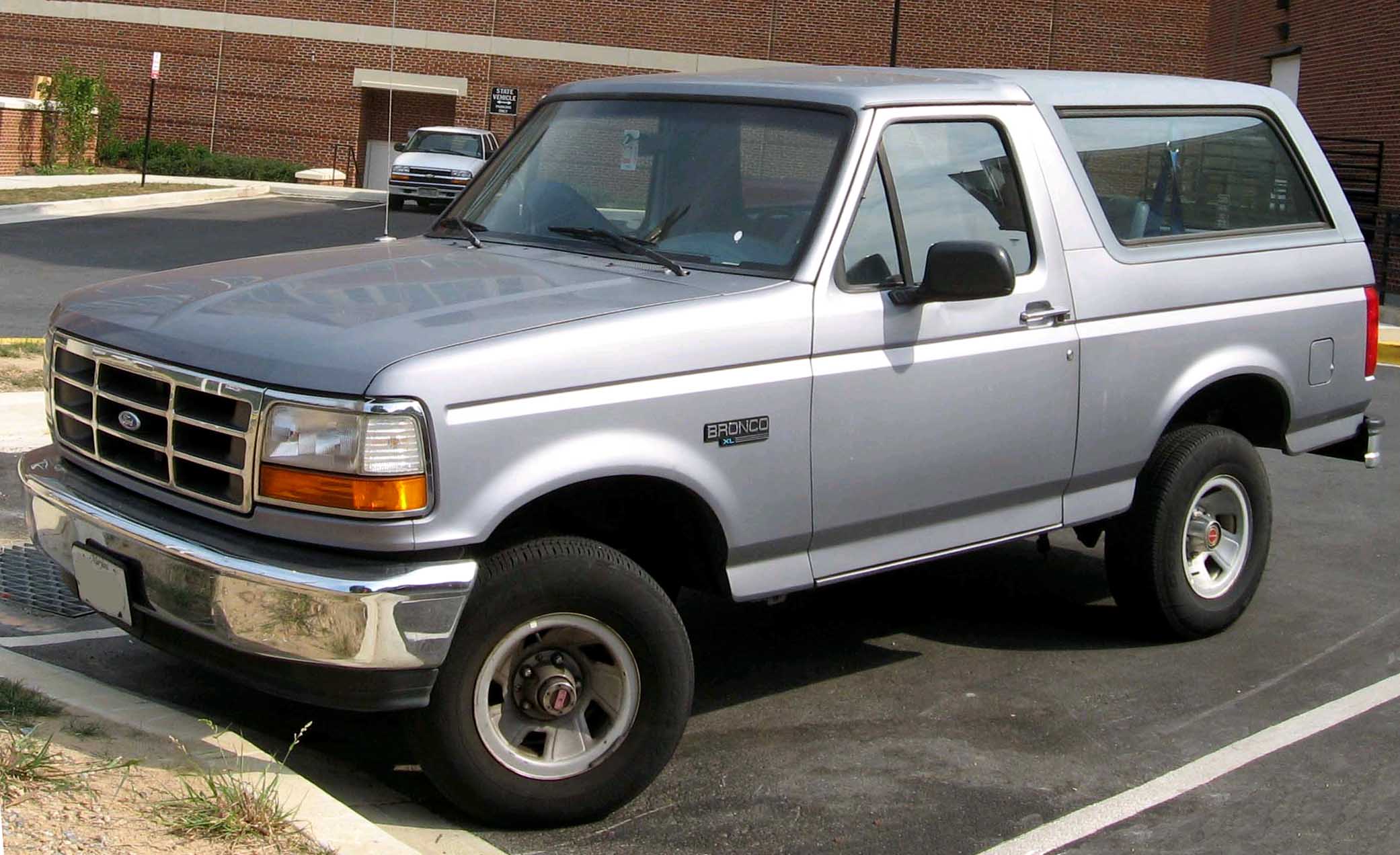 The last Ford Bronco got a host of additional safety features including 3-point seatbelts for the rear seats, front crumple zones and a standard driver-side airbag in 1994.

Interestingly, you were no longer allowed to remove the hardtop in the back due to the addition of the 3-point seatbelts, but you still physically could take the top off. In order to discourage buyers from trying to remove the roof anyway, Ford took out the necessary explanations on how to do so from the owner’s manual and modified the bolts holding the roof in place.

Of course, we all know this version of Ford’s famous SUV. O.J. Simpson was behind the wheel of a white fifth-generation Bronco as he sped down Interstate 405 in Los Angeles for nearly two hours on the evening of June 17th, 1994.

Many companies believe that solid-state batteries will be a very important development in the EV industry. BMW signed an agreement with Solid Power...
Read more
Previous articleSubaru WRX STI S209 Lined Up For North America!
Next articleTesla Model 3 Continues To Lead EV Sales