The Volkswagen Golf GTI TCR: fastest most powerful GTI ever

If you’ve never heard the story about the GTI, well, here’s there really brief version. The Golf was launched in 1974, slated to become Volkswagen’s replacement for the ageing Beetle. While it did not immediately do that, it did spark the interest of engineers and car buff internally.

Said group of people slapped a 110PS (108.5-horsepower) 1.6-litre 4-cylinder engine in a Golf and, no, did not call it macaroni, they called it GTI, and history was made. In the 42 years since the launch of the 1st generation GTI in June of 1976, millions have been sold through seven generations.

The Golf GTI has evolved at a tremendous rate in that time period. Every generation brought new levels of handling, performance, speed and design. The MK7 has seen its fair share of special editions, including the impressive Club Sport, which I drove a few years ago. Every new iteration builds and improves on the last in the name of the driving experience.

As the 7th generation comes to a close, this latest race-car inspired GTI TCR is tops, is the crème de la crème of VW GTI. TCR International Series was an international touring car championship in which VW participated and was very successful, running a race-prepped GTI. I say “was” because the series has now merged with others for the 2018 season. So, the gist of it is that the GTI TCR is a street-legal version of the racecar, and this race car shares 60% of its components with the actual production Golf GTI. 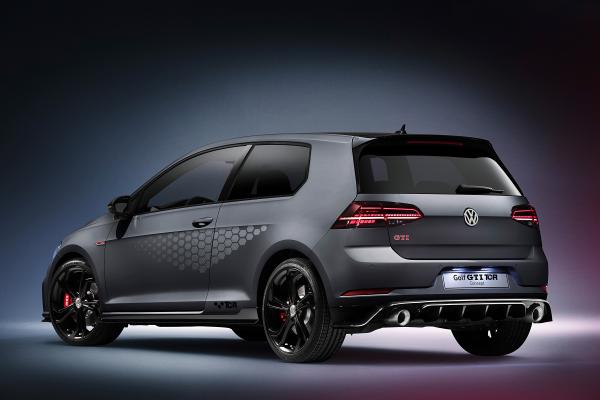 The GTI TCR, then, uses the turbocharged 2.0-liter 4-cylinder engine. The standard GTI gets 220-horsepower, the race car, upwards of 350 horses. The GTI TCR will make due with 286-horsepower and a healthy 273 lb.-ft. of torque. The only transmission will be a 7-speed dual-clutch gearbox (DSG) also housing a locking differential. No details were shared about sprint times but given the torque is on tap from 1,600 rpm and the LSD, we’re thinking high 5-second mark in order to reach 100 km/h. Top speed is rated at 250 km/h but can be increased to 264 km/h by removing the electronic Vmax limiter. There’s also an Akrapovic exhaust system attached to this car!

Physically, the TCR will sport 18” “Belvedere” forged wheels with 19 inchers available as an option. The car gets a newly designed more aggressive bumper with sharply contoured splitter, and a number of other tasteful aero bits. On the inside, the highly bolstered sport seats are covered in microfibre/fabric covers, as are the door cards and shifter.

A high performance braking system with cross-drilled discs will handle stopping duties while two extra engine radiators will keep the mill cooler. An optional performance package will include the Vmax limiter removal, 19” wheels and, most importantly, a more dynamic sport chassis with the adaptive chassis control (DCC) and electrically adjustable shock absorbers.

The car was unveiled at this year’s 37th edition of the GTI Treffen, held on the shores of the beautiful Lake Wörther, in Austria. This world-famous GTI get-together was created by VW enthusiasts some 37 years ago in order to celebrate their love for the GTI. In that time frame, the show has grown to attract thousands upon thousands of cars and hundreds of thousands of car and Volkswagen lovers.

The following are facts: GTI Treffen is an unmatched car show, no matter the brand; the car will only go into production later in 2018; pricing has not yet been revealed; and, worst of all, it’s not coming to North America.

This sedan-like SUV could replace the Avalon in North America It could offer hybrid and plug-in hybrid powertrains The images show a resemblance...
Read more
Previous article2018 Jeep Grand Cherokee Summit Review
Next articleSemi-trailer under-ride guards could kill you