News This Is Why We Love The Car Community: Good Samaritan Saves Stranger’s...

This Is Why We Love The Car Community: Good Samaritan Saves Stranger’s Modified FD Mazda RX-7

Deemed a hero in the car community, a stranger saved another stranger’s beautiful Mazda RX-7.

It’s amazing to know that there are people out there that will go out of their way to help even if they are complete strangers. In this case, a gentleman by the name of Austin A Owens spotted pictures of a sweet-looking FD Mazda RX-7 with water up to its doors and at that moment, decided to save the car. 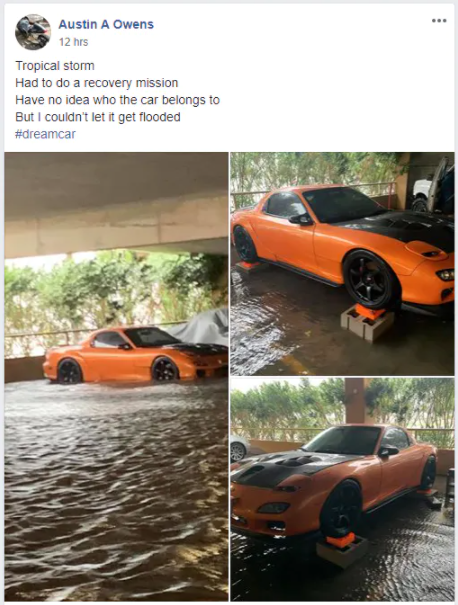 Tropical storm Cristobal generated floodwaters that surely took out a number of cars but both this RX-7 and a nearby Ferrari 360 were not to be destroyed by the storm’s wake. After seeing the Mazda, Owens got some cinder blocks and raised the car above certain doom. The RX-7 was already on some bricks but the cinder blocks further increase the front axle’s water clearance.

Eventually, the owner of the Mazda RX-7 shared that the car was actually parked at the casino, out of harm’s way, or so they thought, as the trunk was leaky. This turned out to be a lucky break for the owner as he had only liability insurance and the paint on the car had just dried from a fresh coat applied a month earlier. They had raised the car just before Owens showed up but they probably would not have been enough to save the car.

Owens’ said on Facebook that he appreciates the love from the community and that he’d expect the same to be done for his own car. Amen.

Lucid recently hinted at a third model to follow the Air and the Gravity. This will likely be a smaller sedan priced around...
Read more
Previous articleIs This Confirmation That Production Of The Koenigsegg Gemera Is Still Two Years Away?
Next articleNovitec Ferrari F8 Tributo Reaches Almost 800 Horsepower