Road rockets that are easy on fuel? This top 10 will show you that it's possible.

In the old days, as soon as performance was mentioned to describe a particular model, all notions of fuel economy were sacrificed. A 1970 Dodge Challenger with a thundering V8 engine didn’t run on, say, mineral water.

Fortunately, as technology has evolved over the past decade, we’ve seen powerful, yet relatively frugal models appear on the market. Of course, two engines with the same displacement and a 200-horsepower difference can hardly consume the same amount of fuel, but the gap is much smaller today than it was yesterday.

As a result, here are 10 models that offer a lot of power while still being very easy on fuel. Note that the industry offers us more than 10 frugal road rockets on the market, and we had to make some heartbreaking choices.

The Volkswagen Golf has always been a fuel-efficient car, and the case of the GTI variant has always been a good example. With the R version introduced in September 2015, the company pushed the envelope even further. In fact, despite the 288 horsepower and 280 lb-ft of torque of the 2.0-litre 4-cylinder turbocharged engine, fuel consumption remained very reasonable at 8.2 L/100 km on average on the highway and 11.4 in the city (23 mpg city and 30 mpg highway). As a bonus, the model offers all-wheel drive. Note that the Golf R isn’t officially a 2020 model, but Volkswagen Canada has ordered a ton of 2019 models from the factory, so it’s still available throughout 2020.

The Type R variant of the Honda Civic is another fine example of efficiency. It may not offer all-wheel drive, but it sticks to the road remarkably well thanks to a well-designed chassis. Its 2.0-litre turbocharged 4-cylinder spits out 306 horsepower and 295 lb-ft of torque, but only drinks 8.3 L/100 km on the highway and 10.6 in the city (22 mpg city and 28 mpg highway). Impressive in every way.

The CT4 sedan is new for 2020 in Cadillac‘s lineup, and since the firm couldn’t only offer a modestly muscular base version, it offers a much more animated V-Series variant. In fact, the Cadillac CT4-V is equipped with a 2.7-litre 4-cylinder turbocharged engine that produces 325 horsepower and 380 lb-ft of torque. Better yet, fuel consumption is 11.5 L/100 km in the city and 8.2 litres on the highway (20 mpg city and 29 mpg highway).

The Toyota Supra is also a beast that knows how to liven up the party without losing control over its consumption. Its 3.0-litre inline-6 (built by BMW, which also offers it in its Z4) produces 335 horsepower and 365 lb-ft of torque while its appetite for fuel averages 9.9 L/100 km in the city and 7.7 L/100 km on the highway (24 mpg city and 31 mpg highway). Note that for 2021, this powerplant sees its output increase by 14% to 382 horsepower, while torque will peak at 368 lb-ft. A slight increase in consumption is expected, but nothing major.

We tend to forget that one. In fact, we’re not referring to the most powerful versions of the Chevrolet Camaro, but to the 4-cylinder engine found in the base trim levels. The powerplant boasts a 275-horsepower cavalry, which is far from negligible. In return, fuel consumption is rated at 10.9 L/100 km in the city, but only 7.6 L/100 km on the highway (22 mpg city and 31 mpg highway). It’s also worth mentioning that the SS variant, equipped with a 455-hp V8 engine and the automatic transmission, drinks only 8.9 L/100 km (27 mpg) when driving smoothly on the highway. In the city… that’s another thing.

The story’s the same for the Ford Mustang. While some of its variants have a marked taste for black gold, the 2.3-litre 4-cylinder turbocharged engine gives you bang for the buck with 310 horsepower and an average fuel economy of 7.3 litres per 100 kilometres on the highway and 11.2 in the city (21 mpg city and 32 mpg highway). 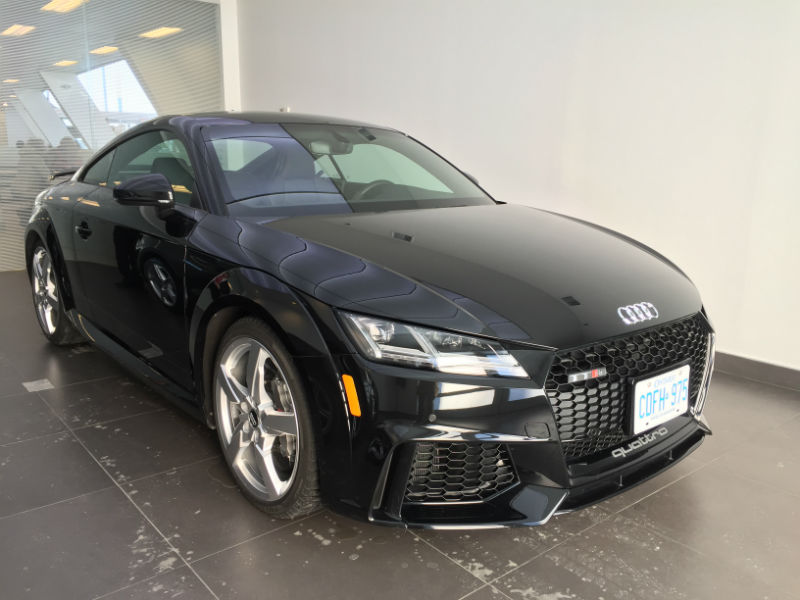 At Audi, the sporty variants of the its product lineup have alphabetical suffixes added to their names. A sportier TT becomes a TTS, while a completely delinquent TT becomes a TT RS. In the latter’s case, the powertrain at work is a turbocharged 2.5-litre 5-cylinder engine that offers 394 horsepower and 354 pound-feet of torque, enough to clear the 0-100 km/h dash in just 3.7 seconds. Above all, the price at the pump is modest with 12.1 L/100 km in the city, but more importantly, 8.2 L/100 km on the highway (19 mpg city and 29 mpg highway).


For 2020, the JCW (John Cooper Works) version of the MINI Clubman saw its output catapulted from 228 to 301 horsepower. Despite this significant increase, fuel economy didn’t suffer too much, averaging 10.1 L/100 km in the city and only 7.6 L/100 km on the highway (23 mpg city and 31 mpg highway). And here, driving pleasure is ever-present, even at low speeds in the city.

The N variant of the Veloster, which made its debut last year, added a little spice to the second-generation model of the Korean firm’s atypical coupe. In fact, it represents the N Division’s first foray into the North-American market, and more variants of the genre are expected in Hyundai’s lineup. In the case of the Veloster N, a 2.0-litre 4-cylinder turbocharged engine capable of producing 275 horsepower is found under the hood. At the pump, the results are very good, with averages of 10.6 L/100 km in the city and 8.3 on the highway (22 mpg city and 29 mpg highway).

The Jaguar F-Type is not only one of the most beautiful cars in the industry, but it’s also one with the best power to fuel-efficiency ratio. Indeed, at 296 horsepower, its small 2.0-litre turbocharged 4-cylinder requires only 10.2 L/100 km for city driving and 7.8 for highway driving (23 mpg city and 30 mpg highway). It’s hard to ask for more from such an exceptional car.

As you’ve seen, there’s no shortage of choice and variety when it comes to combining power and fuel efficiency. And a lot of models had to be left out, like the Mercedes-AMG A 35 and CLA 45, the Subaru WRX as well as the Mazda MX-5 and its cousin, the Fiat 124 Spider, to name but a few.

The Lightyear 0 entered production less than two months ago. The company says it has no choice other than to stop production to...
Read more
Previous article2021 Toyota Trail Versions For Tacoma, 4Runner, and Tundra Coming This Fall
Next articleNew Automoblow System Simulates You-Know-What Behind The Wheel

The concept is based on the PPE platform. Could Audi build a true offroad EV 4x4? The concept transforms into a pickup truck.   Audi...
Read more
Top 10

More than half of new cars can be equipped with a semi-autonomous driver assistance system. Ford’s BlueCruise beats out GM’s SuperCruise in every...
Read more