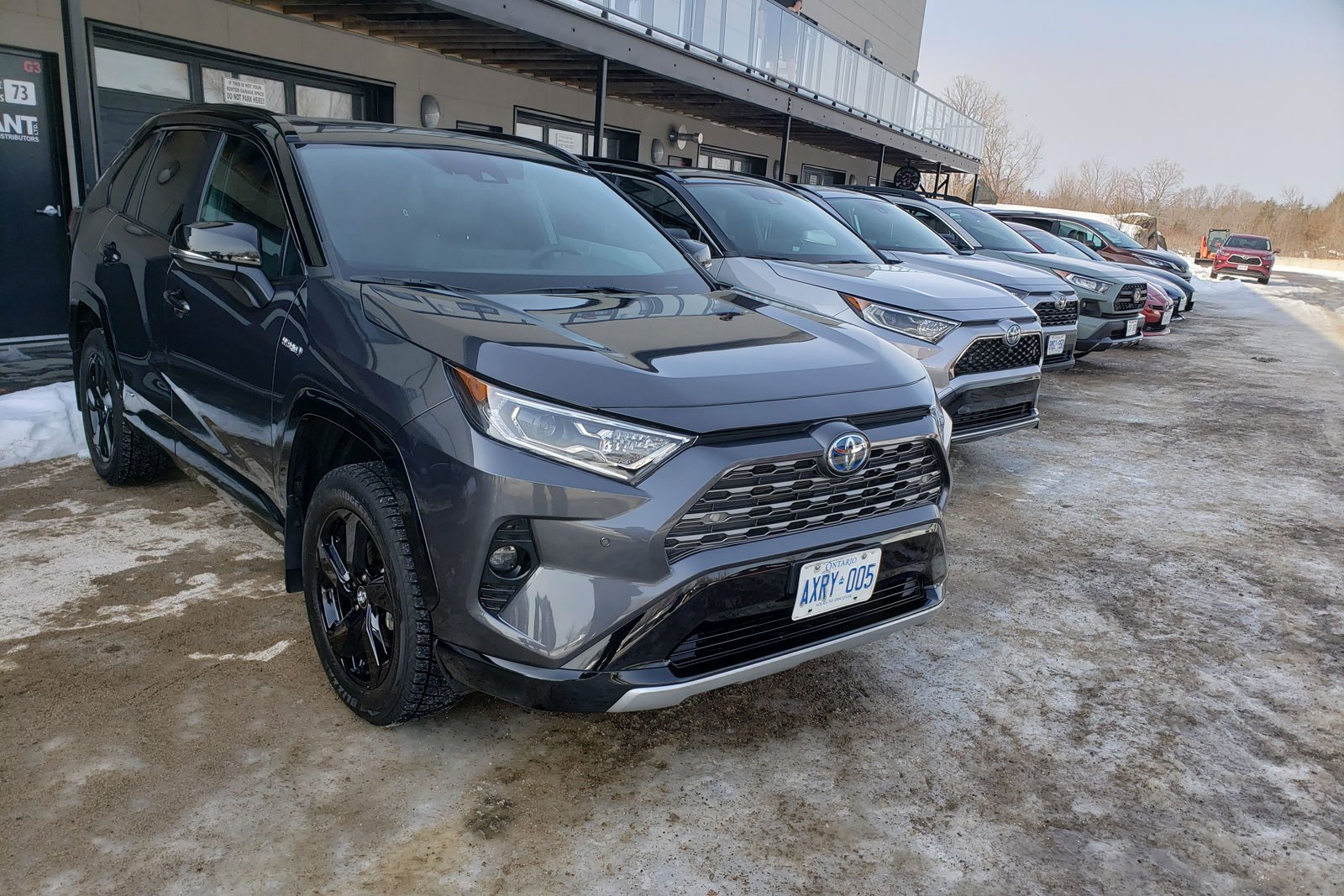 Thanks to a wide selection of Toyota hybrids, the Japanese automaker has been one of the most fuel-efficient brands in the industry for the past decade. Despite the obvious savings at the pump, are these gas-electric vehicles well suited for Canadian winters? 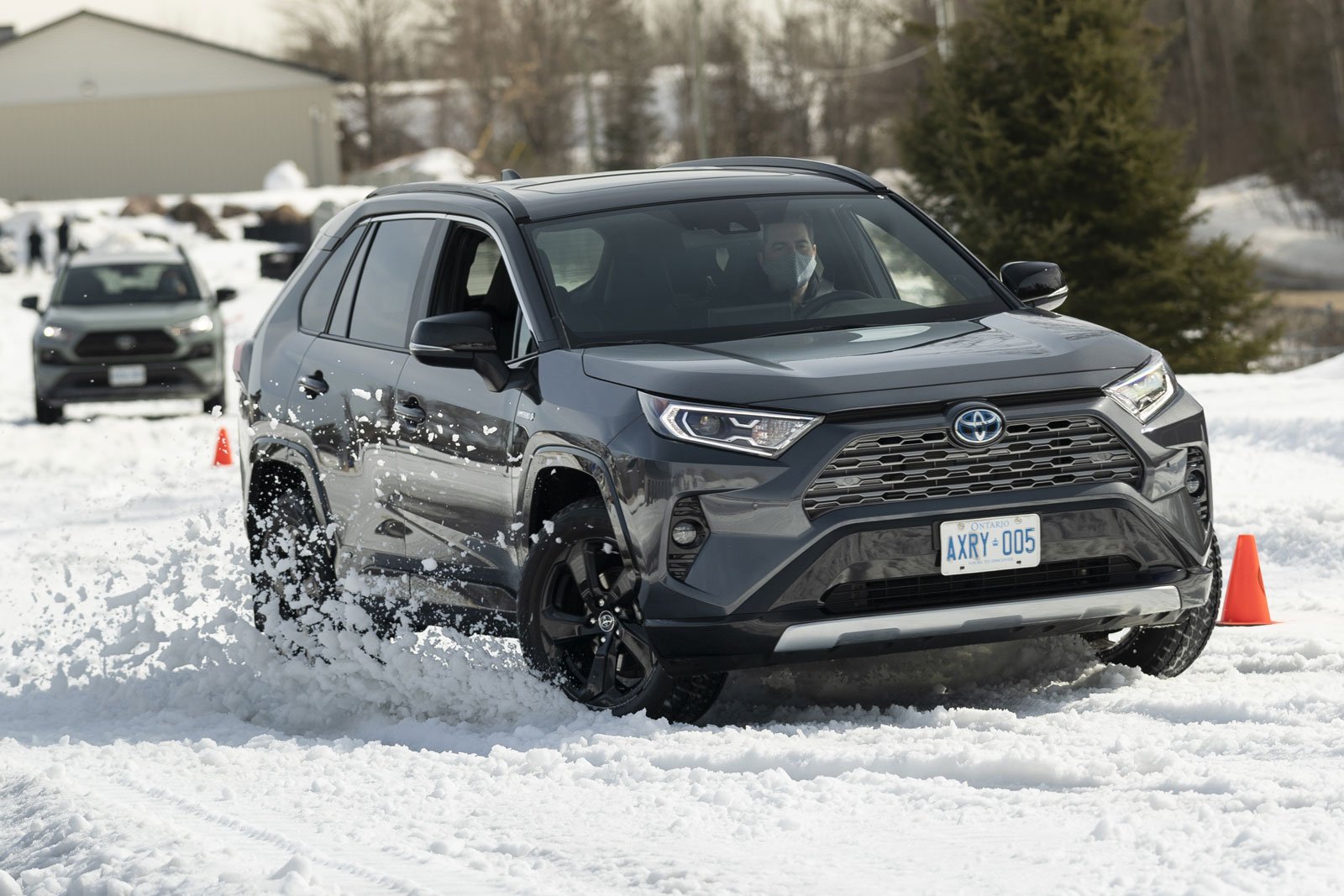 The Toyota Prius arrived on the scene way back in 2000, and a few years later, the Highlander Hybrid and the Camry Hybrid were introduced. More recently, hybrid variants of the Toyota RAV4 and the Corolla were added, while the second-generation Toyota Venza has just been reintroduced with a hybrid system as the only powertrain choice, just like the new fourth-generation Sienna.

The 2006 model year marked the debut of the Toyota Highlander Hybrid, which was the brand’s first model in our market to offer both a hybrid system and all-wheel drive. The Toyota RAV4 Hybrid with AWD launched about 10 years later, and two years ago, the fuel-mising Prius AWD-e was introduced. The aforementioned Venza and Sienna also combine hybrid propulsion and AWD, and another new member of the family has just been added to the lineup, the Toyota RAV4 Prime plug-in hybrid. 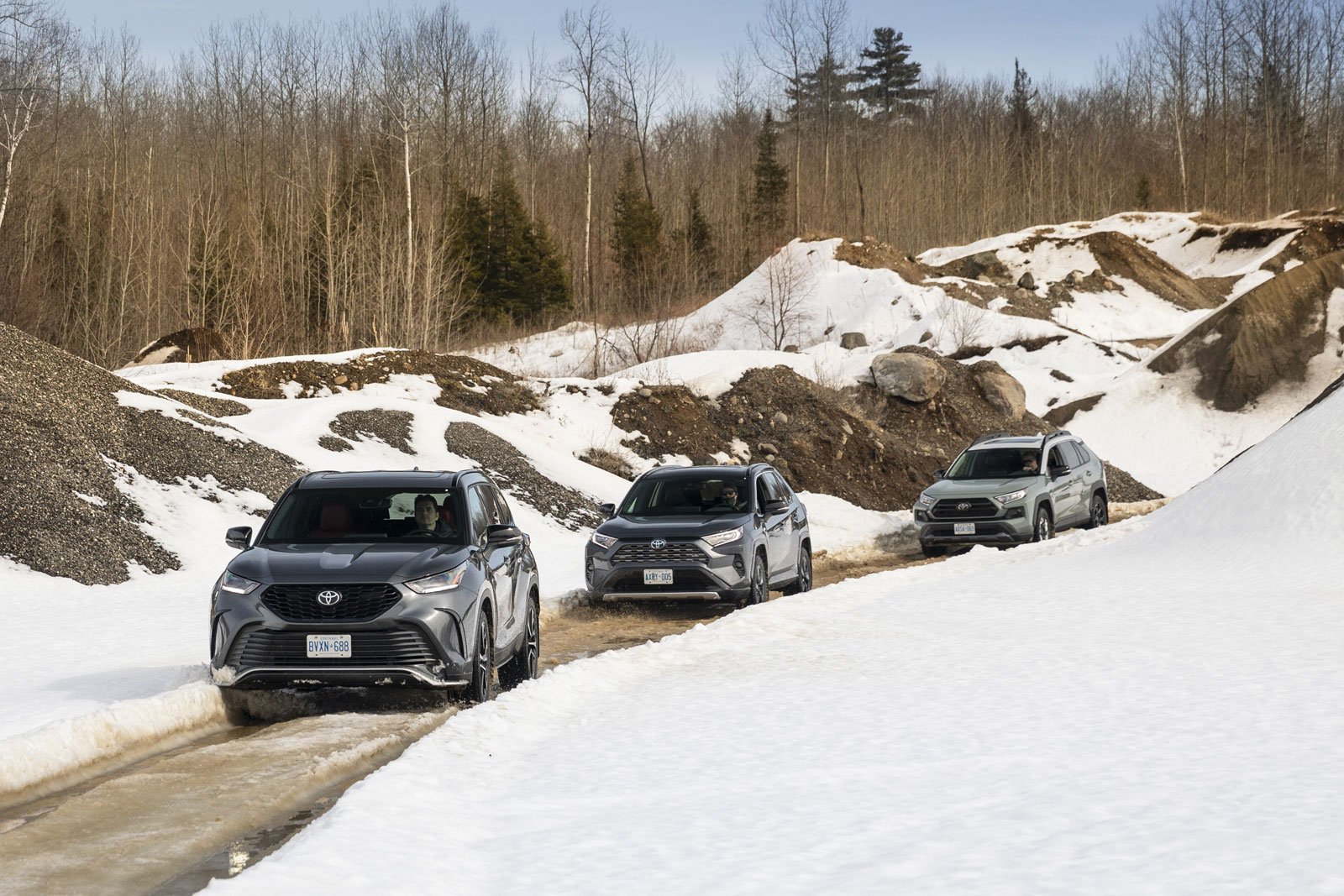 All these all-wheel-drive Toyota hybrids have one thing in common: their combustion engines are connected to the front wheels, and electric motors manage the rear wheels. The latter detail is most important, as it eliminates the need for a mechanical link between the two axles. In other words, there’s no driveshaft leading to the rear wheels. To demonstrate how well its hybrid AWD vehicles perform in snowy, slippery conditions, Toyota invited the media to Calabogie Motorsports Park in Ontario where it set up some comparative exercises.

A first test, which was admittedly more amusing than scientific, pitted a 2021 Toyota Prius AWD-e against a rear-wheel-drive Toyota 86 in a straight-line acceleration run. It’s 121 horsepower against 205 in this confrontation, but on a snowy and slushy surface, the result was utterly predictable: the Prius put the 86 sports car to shame. Following the improvised drag race, we put the cars through their paces on a small yet windy road course, which the Prius handled admirably. 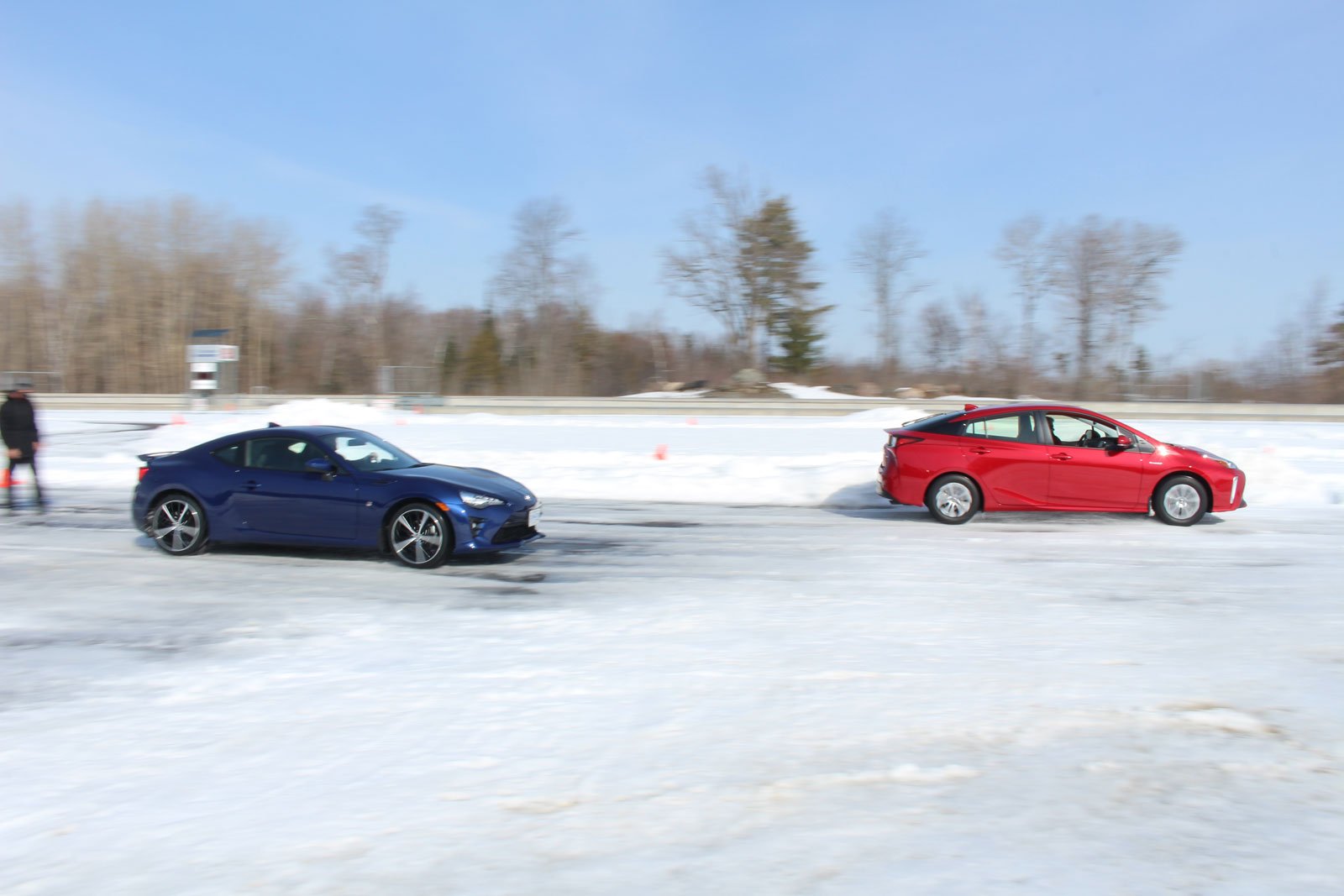 Yet to achieve this all-weather traction, the Prius AWD-e simply adds a 7-horsepower motor on the rear axle. You read right: seven ponies. This rear motor also produces 40 pound-feet of torque, and actives itself from 0 to 6 mph (0 to 10 km/h) for enhanced traction off the line, but also at speeds up to 46 mph (70 km/h) as needed. Above that speed, the small motor shuts off as it’s no longer needed, saving energy and resulting in a Prius that’s marginally less efficient than the front-drive-only variant.

Next up, the same course, but this time around, we’re treated to a matchup between a 2021 Toyota Sienna AWD and a Toyota GR Supra. It’s 245 horsepower against 382, 4,825 pounds against 3,400, but the outcome was similar. Thanks to its all-wheel traction, the big Sienna clawed its way up to speed, while the Supra jus bogged down, its traction control system preventing the rear wheels from spinning frantically. Even launched the sports car in second gear didn’t prevent it from getting its butt kicked by the seven-passenger van. 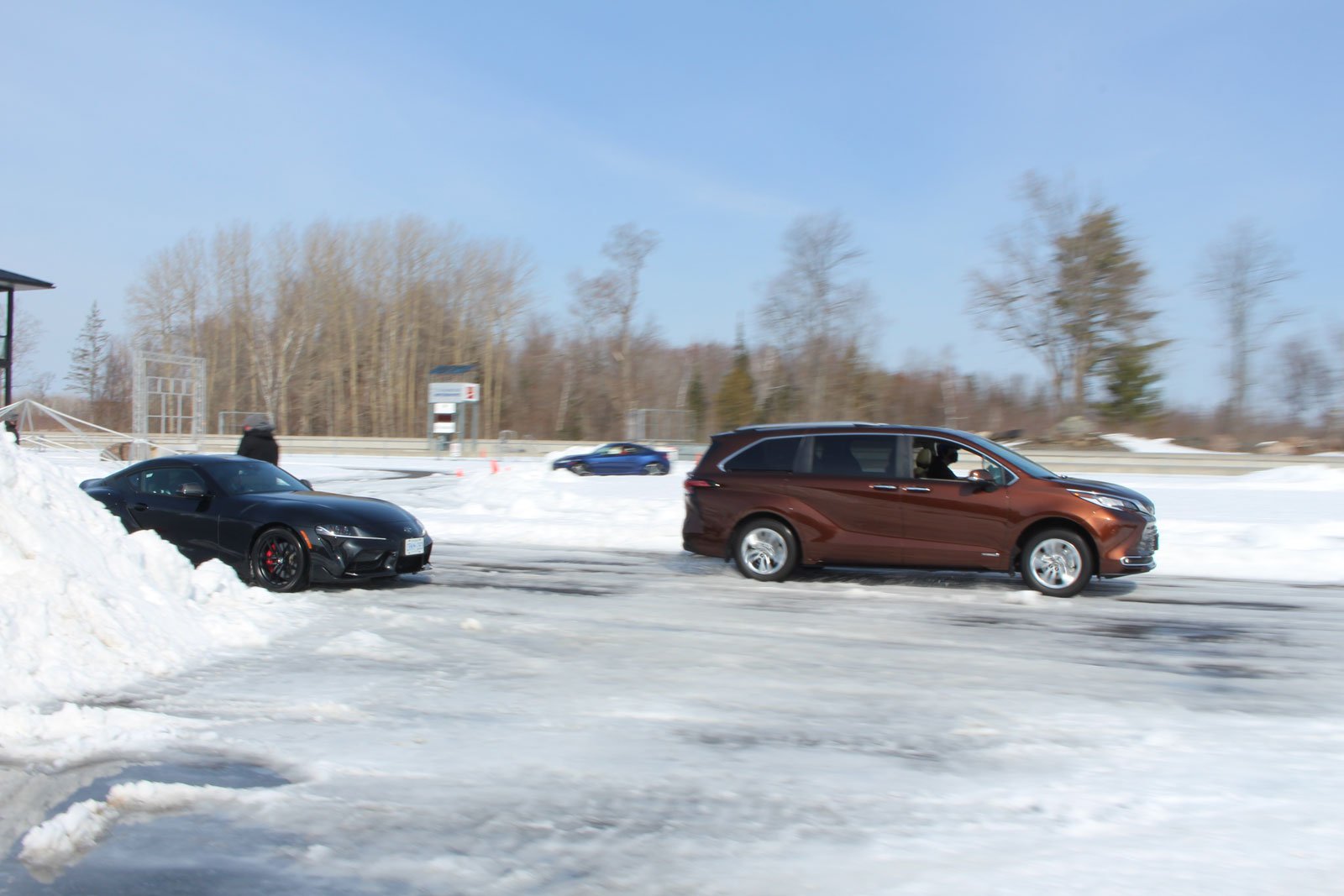 Just like the Prius, the Sienna carried its weight around the road course, even though it obviously wasn’t engineered to be a track beast. The additional electric motor on the rear axle of the Sienna AWD develops 54 horsepower and 89 pound-feet of torque, there’s no compromise on interior cargo space or towing capacity (3,500 pounds or 1,588 kilograms), and fuel economy barely suffers by adding the all-wheel drivetrain.

With so many different available drivetrains, the 2021 Toyota RAV4 has something for every compact crossover shopper. We were able to sample a front-drive RAV4, a RAV4 TRD Off-Road, a RAV4 Hybrid and a RAV4 Prime in what was the most informative test exercise of the day, with straight-line acceleration runs and a short slalom course—all in fairly deep snow. 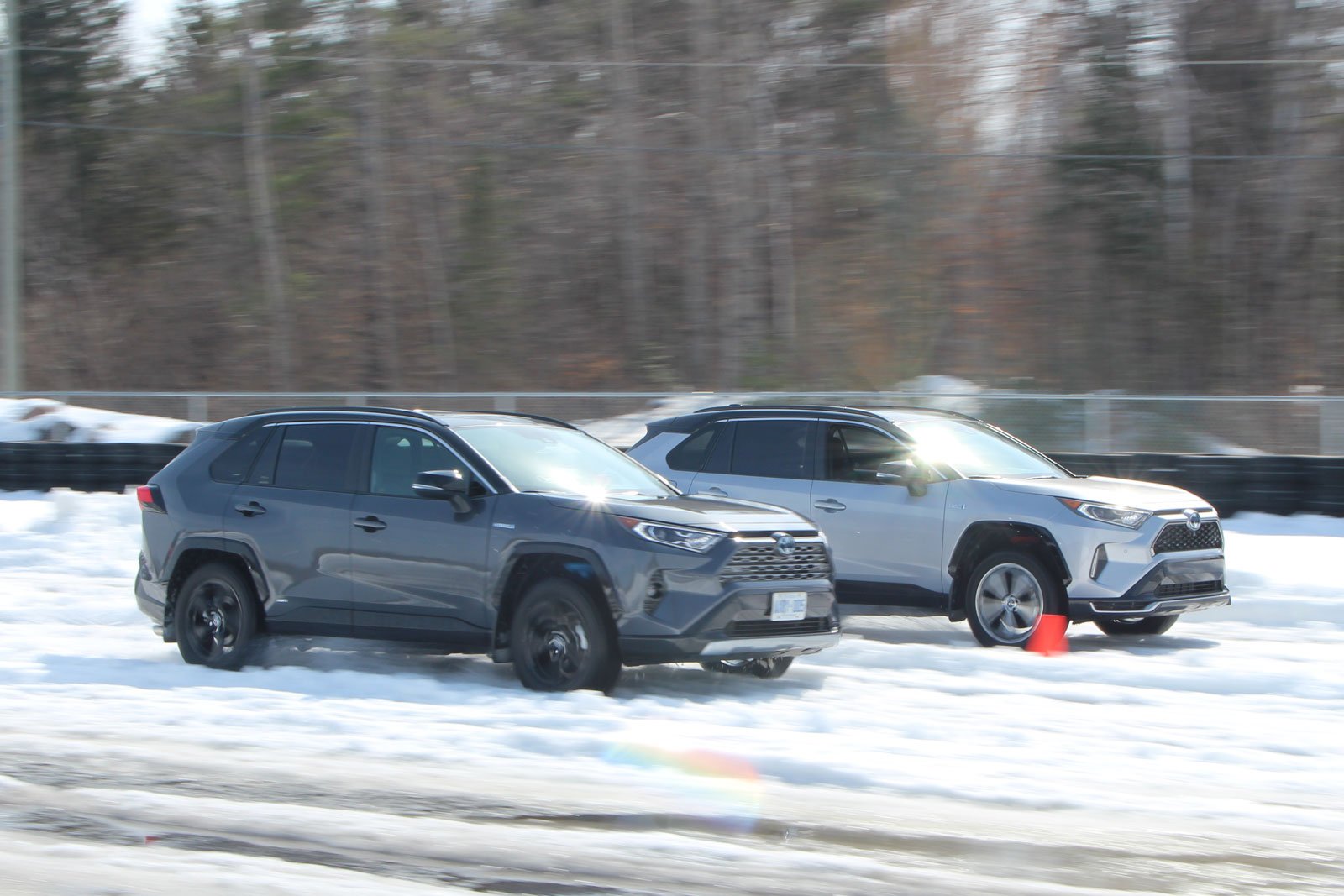 The RAV4 LE FWD did what it could to accelerate in the drag race portion, but without power fed through the rear wheels, it couldn’t get up to speed quick enough to follow the other three variants of the crossover, including the Toyota hybrids with baked-in AWD. As expected, the 302-hp Prime was the quickest, although when we accelerated using its EV-only mode, it was noticeably slower with its 179-hp electric motor up front and 53-hp motor at the rear. The RAV4 TRD Off-Road and the RAV4 Hybrid performed equally well in a straight line, the TRD’s all-terrain tires slightly compensating for its output deficit—203 horsepower versus the Hybrid’s 219. The latter includes a 53-hp rear electric motor, just like in the Prime.

Through the slalom portion of the course, we’ll give the TRD Off-Road and its mechanical driveline the nod regarding agility and traction, although to be honest, the Hybrid isn’t far behind it, to the point where without this back-to-back comparison, we likely wouldn’t notice the difference. And consumers probably won’t either. The RAV4 Prime struggled more as its stability control system tried to upstage the powerful hybrid system, bogging down forward and lateral motion. The front-drive RAV4 LE managed to stay out of trouble around the cones, with a little less momentum. 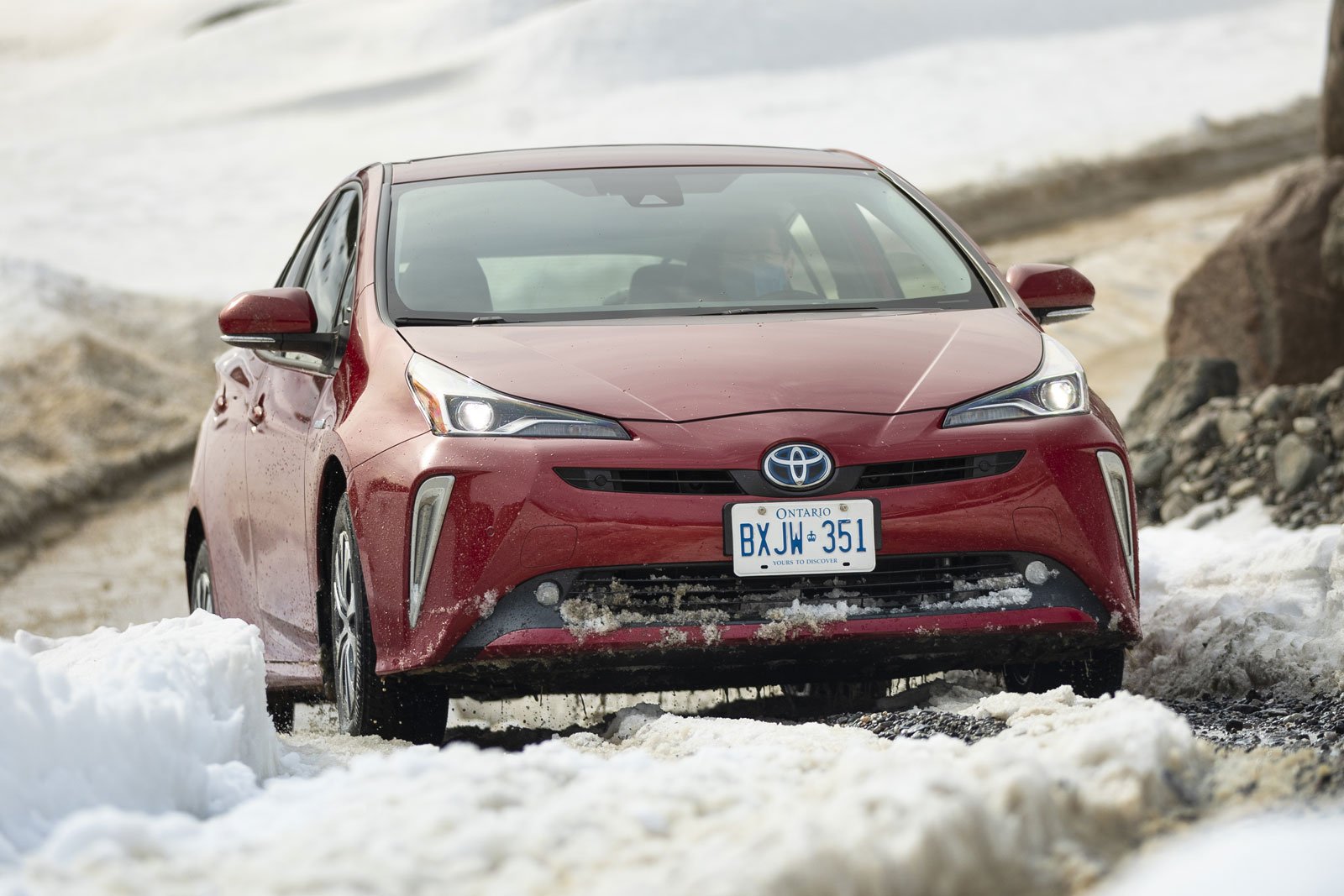 For the last exercise of the day, we got to drive AWD Toyota hybrids through a slushy and rocky quarry trail, which included the Highlander Hybrid and the Venza in addition to the models mentioned above, in addition to a 4Runner TRD Pro and a RAV4 TRD Off-Road for the sake of comparison. The Venza borrows the RAV4 Hybrid’s 219-horsepower system, while the Highlander shares its hybrid setup with the Sienna, producing 243 combined horsepower in this application. What initially seemed like a relevant test turned out to be a mild one, as even the Prius AWD-e was able to clear the course without any mishap.

End of the day, the electronically controlled all-wheel drivetrains in Toyota hybrids are well developed, up to the task of providing good traction on slippery surfaces, at least in these organized closed-course activities. What’s important here is that the Japanese brand offers the added benefit of AWD in its family of fuel-efficient hybrid-powered vehicles—of all shapes and sizes.

This is a one-of-one special edition of the Chiron which is the last Bugatti powered by a W16 engine ever. The €9,792,500 winning...
Read more
Previous articleReport Finds That Lordstown Might Not Be Entirely Honest About What It’s Up To
Next article2021 Chrysler Pacifica Pinnacle Review: The SUV Of Minivans