News Updated 2022 Audi A8 Gets Design Tweaks and Interior Refinements

Updated 2022 Audi A8 Gets Design Tweaks and Interior Refinements 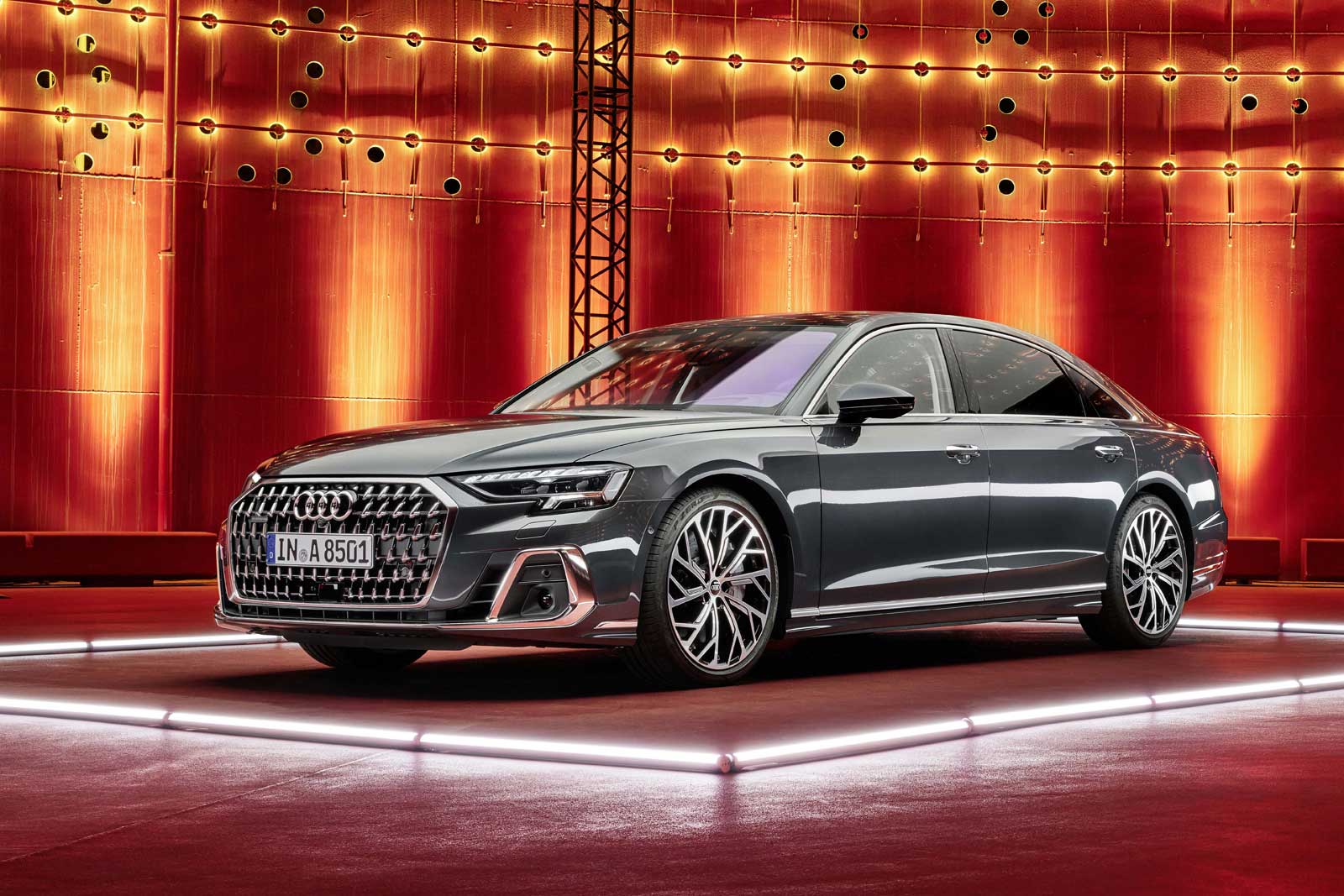 The 2022 Audi A8 will go on sale in North America next summer, as the German brand’s flagship sedan receives styling enhancements in addition to new interior trim and packages.

Introduced on our market for the 2019 model year, the current-generation, long-wheelbase A8 L—the regular-length A8 is no longer offered the U.S. and Canada—represents the brand’s pinnacle of luxury and technology. The changes to the 2022 model aren’t major, but do help keep the big sedan fresh in a competitive segment. 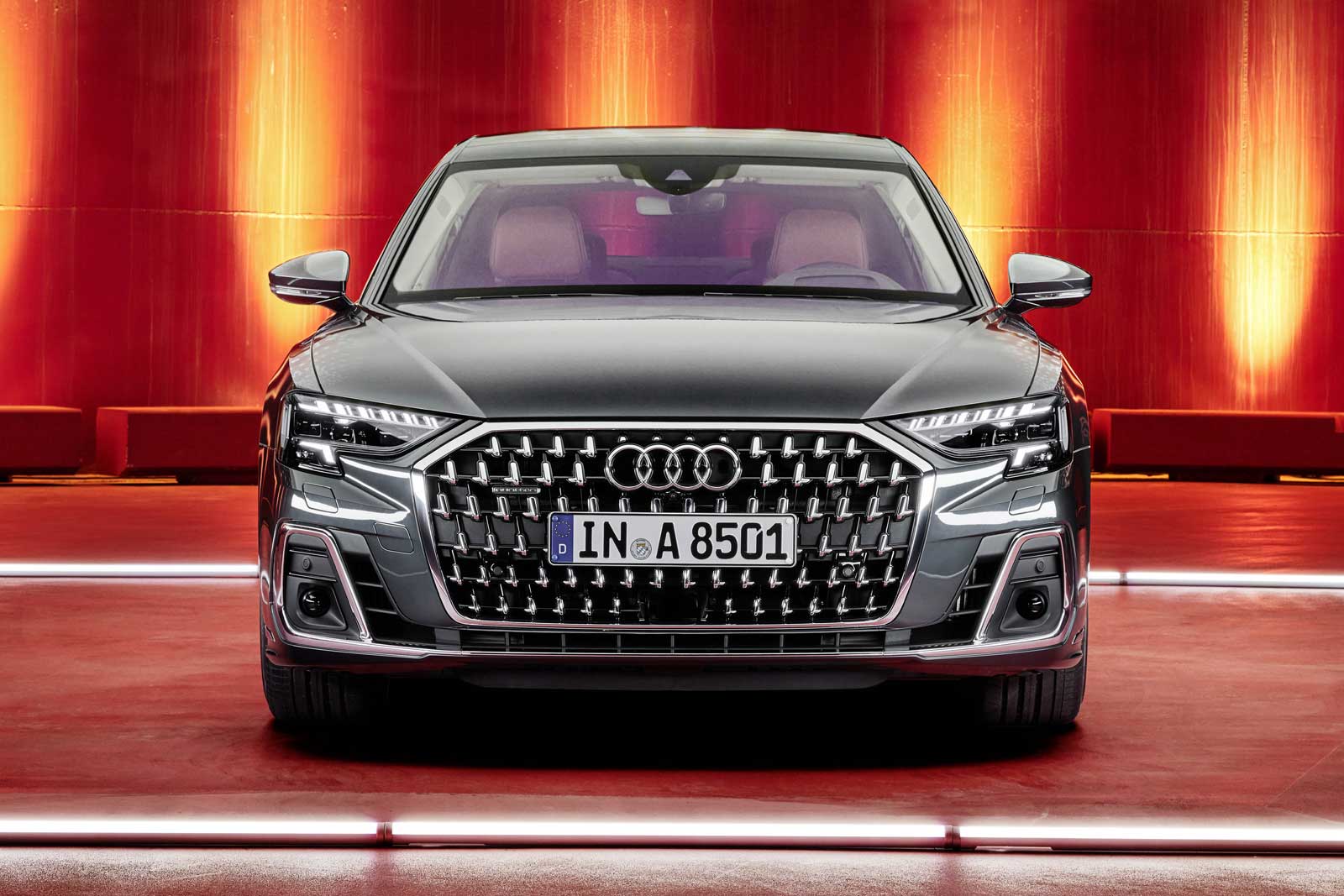 And that segment obviously includes the Mercedes-Benz S-Class, the BMW 7 Series and the Porsche Panamera, but also the Lexus LS, the Maserati Quattroporte and the Genesis G90.

First and foremost, let’s get the powertrain changes out of the way: there are none. The 2022 Audi A8 L 55 TFSI quattro keeps the turbocharged 3.0L V6, developing 335 horsepower and 369 pound-feet of torque, managed by an eight-speed automatic transmission. The A8 L 60 TFSI quattro is still equipped with a twin-turbo 4.0L V8 belting out 453 horsepower and 487 pound-feet. The U.S. market also gets the A8 L 60 TFSI e quattro with its plug-in hybrid system that consists of a turbo 3.0L six, an electric motor and a 14.1 kWh battery, for a combined output of 443 horsepower and 516 pound-feet, along with an EV-only driving range of 18 miles. 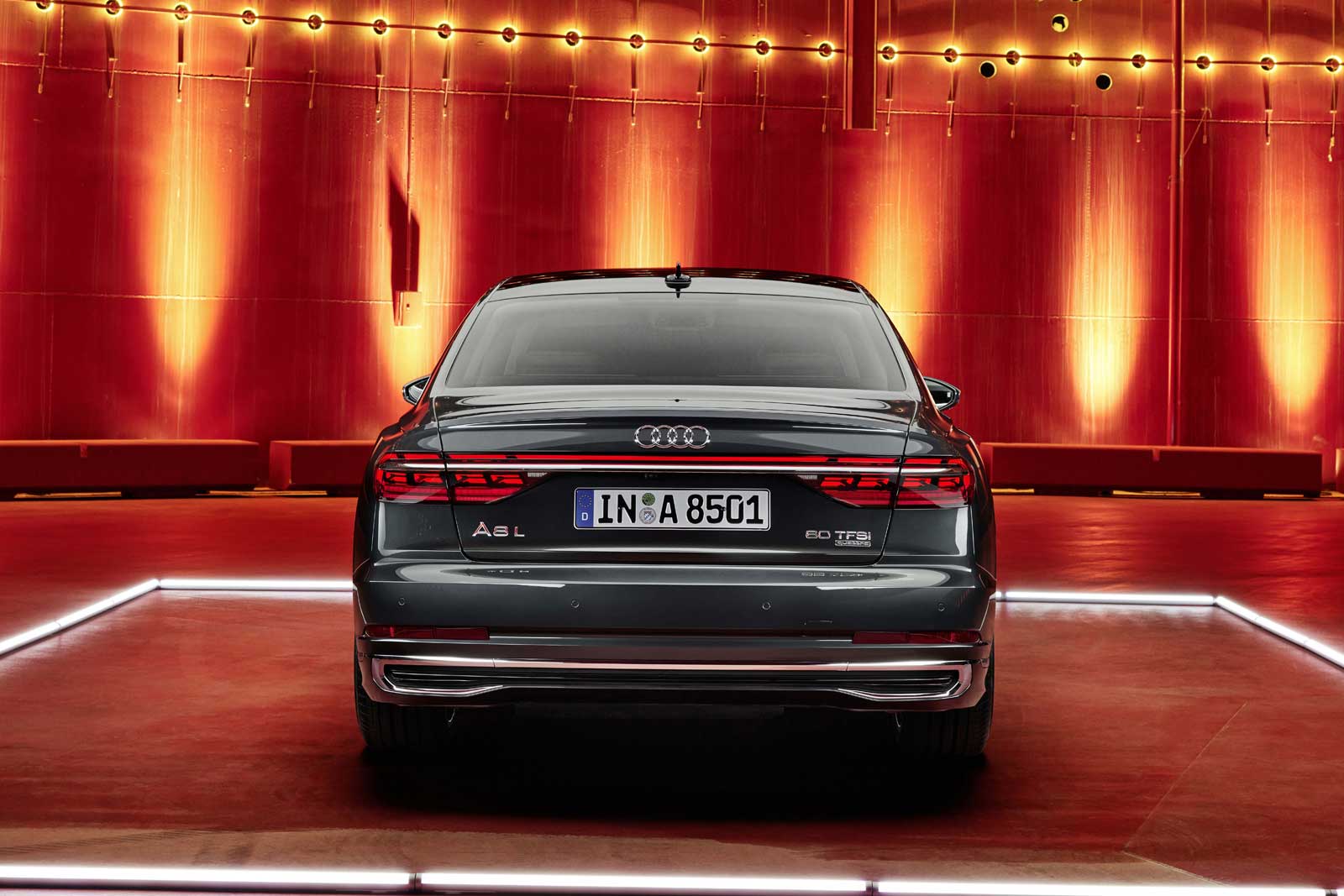 Meanwhile, the performance-infused 2022 Audi S8 is equipped with a twin-turbo 4.0L V8 that spits out 563 horsepower and 590 pound-feet of torque, it too mated to an eight-speed automatic. It’s worth nothing that all these powertrains are combined with a 48V mild hybrid system, which reduces fuel economy slightly and provides more refined transitions of the stop-start system.

The 2022 Audi A8 receives a new front fascia with a reshaped grille that has a wider base and more pronounced chrome angles, along with a redesigned lower bumper treatment and headlight clusters. The rear end gets more chrome and a reworked bumper diffuser, while the OLED taillights incorporate a customisable signature lighting animation. The exterior freshening also includes new wheel designs, with up to 15 choices in total ranging from 18 to 21 inches in diameter. There are also new paint colours, including five matte hues. 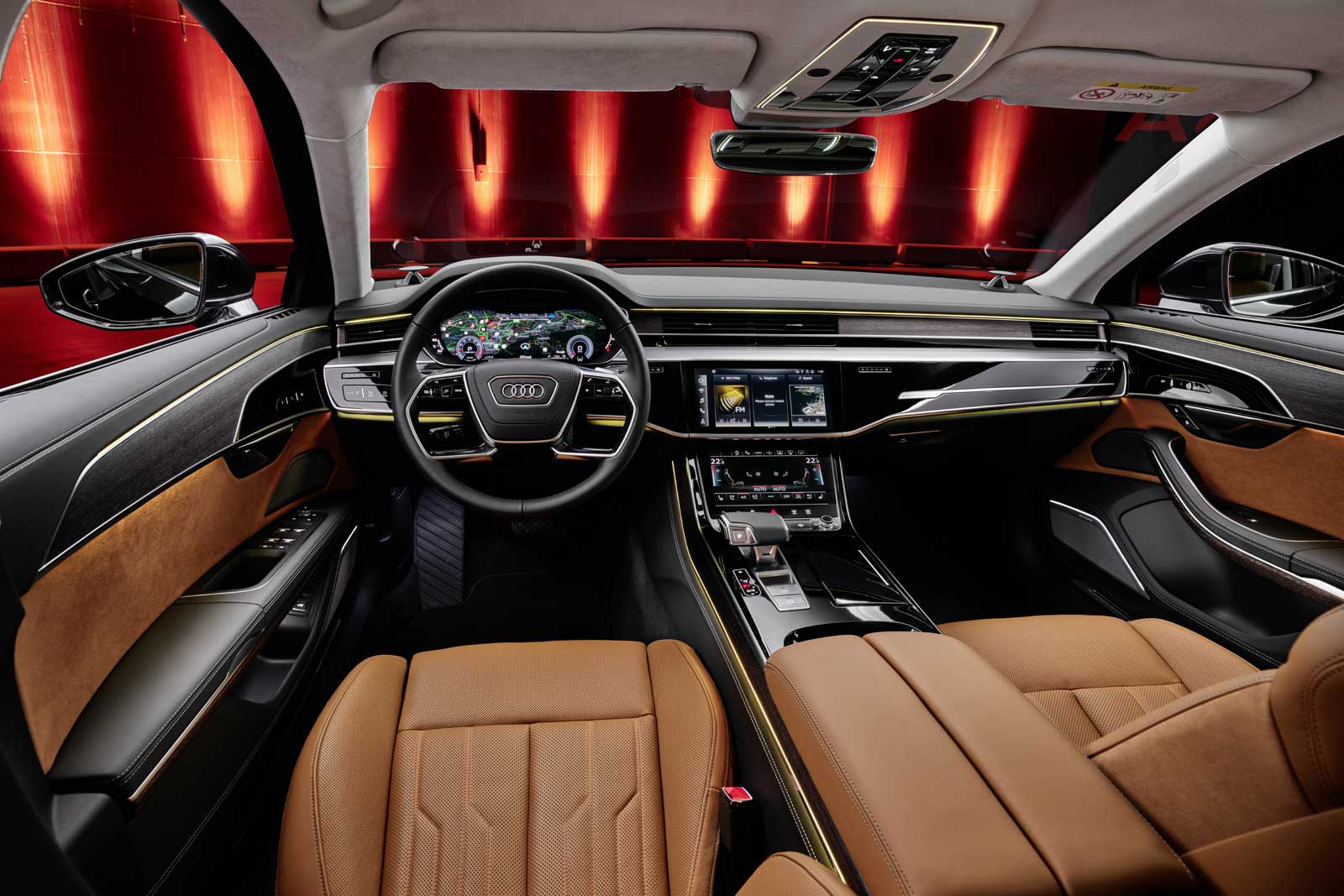 Inside, the A8 gets revised upholsteries, trimmings and colours, and in the back, a new Relaxation seat offers foot warming and massaging by the way of a fold down panel on the front-passenger seatback. Otherwise, the sedan is still equipped with the Audi virtual cockpit 12.3-inch digital instrument panel, the MMI infotainment system with two stacked touchscreens (10.1 and 8.6 inches), along with optional head-up display and 23-speaker Bang & Olufsen surround sound system. In addition, the rear-seat area can now be equipped with two 10.1-inch full HD displays for watching streamed and HDMI-connected content, operated via a fixed remote touchscreen on the center armrest. 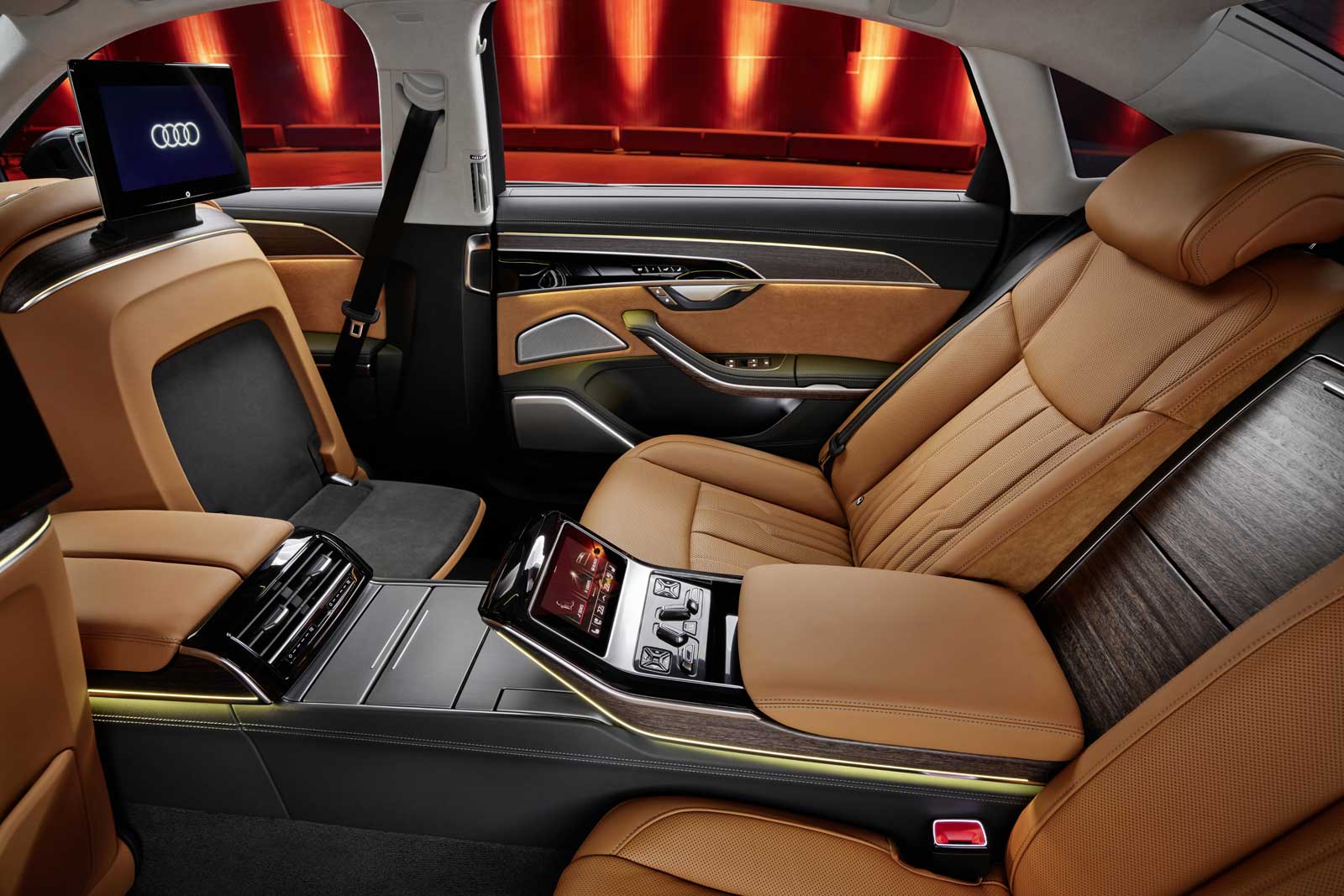 Finally, the Chinese market will get a long-rumoured 2022 Audi A8 L Horch variant. Sporting a body stretched at 13 centimetres or 5.1 inches, the A8 L Horch piles on the luxury with diamond-quilted leather, cushion logo embossing and thicker carpeting on the inside. The posh sedan can also be painted in a two-tone colour, and can be further distinguished by its Singleframe grille with unique vertical bars, more chrome trim, specific taillight animation, a larger panoramic roof and appropriate badging. For the time being, the A8 L Horch will only be sold in China.

By the way, Horch was originally established in 1904, and was one of four German car brands that merged to form Auto Union in 1932. The latter became simply known as Audi AG later on, and the company’s four-ringed logo represents the fusion of the four original brands (Audi, Horch, DKW and Wanderer).

Pricing for the North American market hasn’t yet been announced, but the refreshed 2022 Audi A8 L will go on sale in the summer of 2022.

Refresh should include new styling and new MBUX No revolutionary changes expected for mid-cycle update Mercedes-Benz just teased its next model, but this one's...
Read more
Previous articleTesla is Allowing Non-Tesla Vehicles to Use 10 Superchargers in the Netherlands
Next articleNew 2022 Honda Civic Si Priced From $33,150