This is a near farewell story to one of the longest-running generations of any vehicle sold as new in the 21st Century. Well, to be more precise, it should be. The Tundra, this Tundra, has been soldiering on largely unchanged since 2007 and it might be that this 12th model year will be its last.

I’m supposing a number of things as, as I write these lines, nothing official has been released by Toyota that would indicate the imminent arrival of the next generation Tundra. Some spy shots are floating about on the world-wide web but they show a once more refreshed existing truck but this may be nothing more than a ruse on Toyota’s behalf. We all know the Japanese giant has massive resources at its disposal.

In the meantime, the 2018 Toyota Tundra is still in the game, if barely. The game itself has evolved and left the full-size Toyota behind but despite that, those looking for a true classic pickup experience of old need not look further.

Even if the Tundra’s changed very little over the last decade and a quarter, it’s still handsome enough. I mean, you can’t reinvent the wheel when it comes to these mega workhorses. 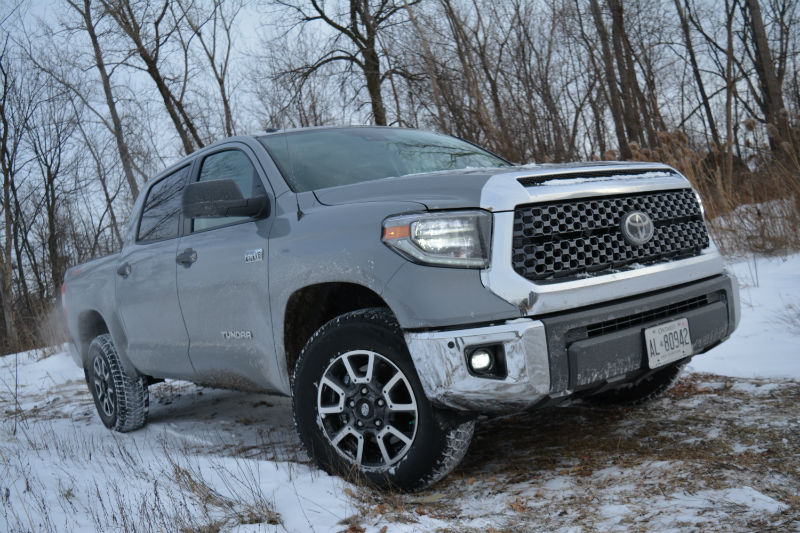 The TRD-packaged Tundras are, in my opinion, the more attractive of the lot but one way or another, the cabin changes little other than seat coverings and a few extra switches. This matters not as functionality and ergonomics are still current, with one or two exceptions. The heated-seat controls, for example, are all but invisible and completely out of reach.

The CrewMax cabin is the one to opt for when people-carrying outweighs load-carrying needs. The full-size large cab trucks are some of the best ways to get five true seating spots for adults. Most decent-sized crossovers can’t pull it off with such ease. As well, the majority of the rear benches fold one way or another to increase cargo space for such things as bicycles. 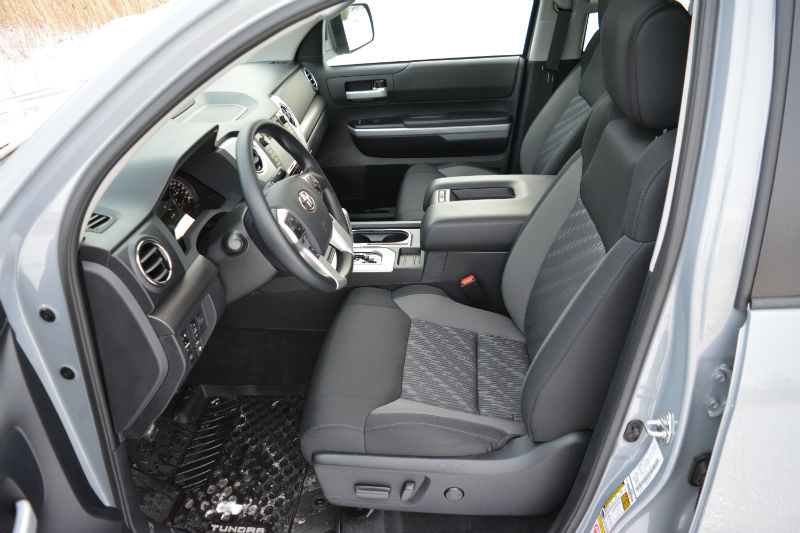 The Tundra’s seats are actually quite good, especially up front. They provide good support and more room than anyone needs unless you’ve starred in an episode of My 600-lb life. There are also loads of areas to store all your knickknacks including the large centre console.

The downside to the CrewMax cab is that it can only be ordered with the 5”5’ box. Where the Double Cab loses in interior space, it gains in bed length with two options: 6”5’ or the “mobile smart fortwo parking space” 8”1’ bed.

Based on take rates, Toyota dropped V6 and single cab versions in Canada some time ago. This explains why the 2018 Toyota Tundra’s base price is of $39,590. This amount is equal or greater than most of its competitors, including heavy and Super Duty iterations from Ford, RAM, and Nissan.

Obviously, the base Tundra is well equipped and despite this setback on paper, the reality is that the Toyota will generally be less expensive than comparably equipped trucks from the Big 3. A Double Cab 4X4 SR with the 6”5’ box is probably your best bet for hauling, towing, and people carrying duties. 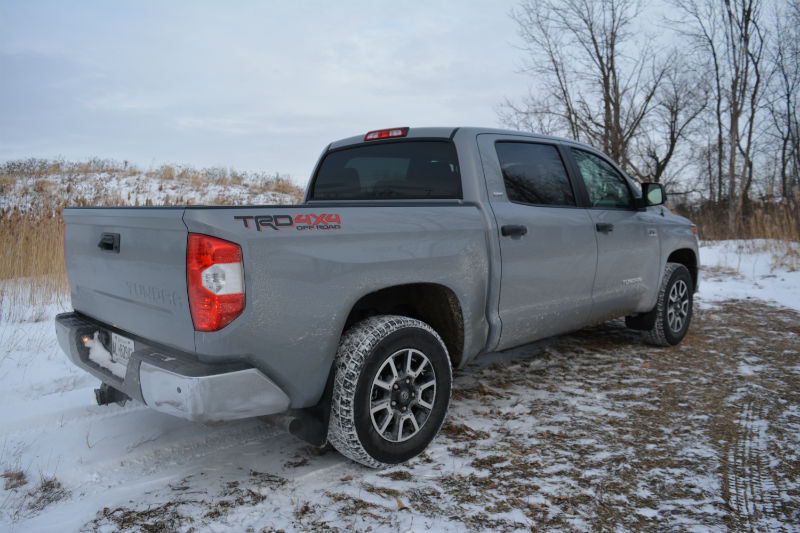 You’ve got few if any real, options when it comes to motivating the big Tundra. The iForce 5.7-litre V8 and its adjoining 6-speed automatic transmission is the only powertrain available. Toyota still offers the 4.6-litre V8 on one trim, the most basic one in fact.

The 5.7 provides 381-horsepower and 401 lb.-ft. of torque as of 3,600 rpm. That’s fairly high engine speeds to reach maximum torque for a vehicle designed to haul, pull, and even crawl. I’m certainly not complaining as that means keeping a heavy right foot for all above-mentioned applications, plus accelerating, results are big V8 noises. Also, big fuel guzzling. Don’t ever be fooled by the fuel gauge! The tank holds 144 liters (!!!) of the stuff so a half tank equates to being out 75 liters!

Fuel consumption aside, the V8 is plenty potent and well served by the eager 6-speed autobox. Shifts are crisp and quick. The Tundra’s steering doesn’t quite match the tranny as, although precise enough, it is heavily assisted. The brakes are strong and feature large discs all around and the front calipers sport 4-pistons.

The ride quality, if we can refer to it as such, is raw. Unladen, the Toyota Tundra does what it does because if its rear heavy-duty leaf springs mounted to the live axle. The TRD packages include Bilstein dampers and they are a must. The 5.7-litre SR and SR5s can be kitted with TRD. Never mind the Limited and Platinum, get the SR or SR5 and throw on the TRD performance air intake and dual exhaust system. You’ll thank me.

Capacity-wise, the Tundra’s not the hardest working of the segment. Depending on trim and equipment, you’ll not be able to tow more than 10,000 lbs. or haul more than 1,500 lbs. These are roughly regular Nissan Titan numbers. A similarly priced Titan XD can tow up 2,000 lbs. more and haul up to an extra 1,000 lbs.

I’m truly a huge fan of the Tundra. My pick would be a cement grey double cab SR 5.7L 4X4 with the TRD off-road package and the TRD performance accessories. I’d also get a membership at my local Shell station. The Tundra is not even close to being the greatest but it’s the most honest and authentic pickup left.

GM and Kia are not the only automakers dealing with big battery problems. GM recalled all of its Chevrolet Bolt EVs but many...
Read more
Previous articleThe F-150 Power Stroke has finally arrived!
Next articleTop 10 original alloy wheels