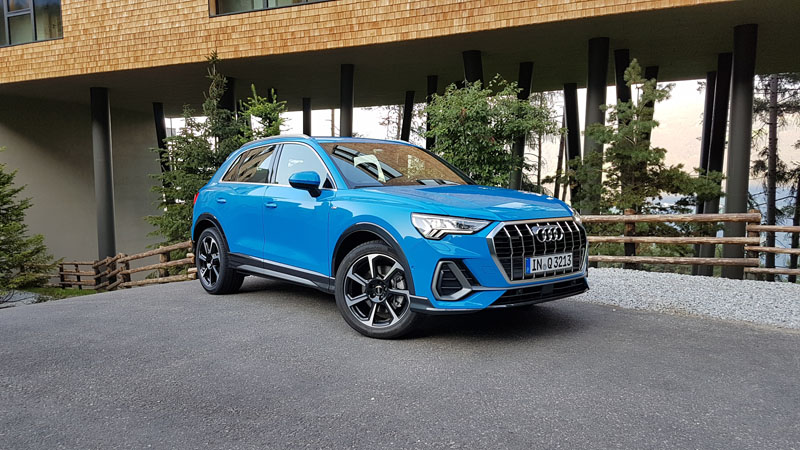 The 2019 Audi Q3 is the gateway to the Audi SUV lineup and plays a pivotal role in introducing younger customers or new clients. That means Audi had no room for error with this brand new generation of its Q3.

Subcompact luxury SUVs are miniature versions of another product, and a more accessible and affordable one as well.

While their bulkier counterparts often inspire complex and/or aggressive styling, adapting this styling to a smaller vehicle can be tricky. Everyone agrees, the 2019 Audi Q3’s got “mini Q8” written all over it.

In all fairness, the new Q3 sports the Q8 look rather well. It is bigger than the outgoing model in every way, gaining is space on the inside as well. The remodel comes at a right time, it has to face the popular BMW X1, as well as the all-new Volvo XC40 and Cadillac XT4, among other contenders.

Motorillustrated.com visited Italy’s South Tyrol region to test out this new, second generation of the Q3, a subcompact luxury SUV that sold over 1.1 Million units worldwide.

Test driving an entry-level luxury SUV like the Audi Q3 in such a “dynamic” environment as the Italian Alps is polarizing. The passionate, adrenaline-seeking driver at heart eagerly anticipates a medley of twists, turns and many tire screeching opportunities, while the composed journalist with the average buyer in mind wonders why such an environment is necessary for the type of vehicle.

What if it can’t pull through? 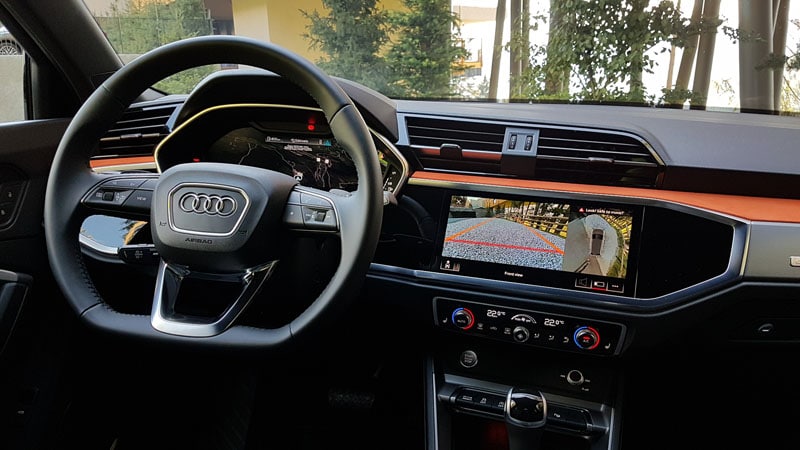 It’s not a choice of engine per say, but more of a choice of “tune”, and it’s the first good improvement from the outgoing generation.

We only had the upper trim Q3s at our disposal in Italy, and this particular “tune” proved itself to be up to the task by providing more than ample power to scoot the Q3 around the twists and turns of the Italian Alps.

While climbing steep hills and entering highway ramps in Northern Italy’s chaotic and unforgiving road network, the Q3 45 TFSI Quattro had enough juice to haul butt, with an outstandingly linear power delivery thanks to the TFSI technology and the 7-Speed S tronic automatic transmission (and 8-Speed gearbox will be offered in North America), which in turn feeds the quarto all-wheel-drive system. 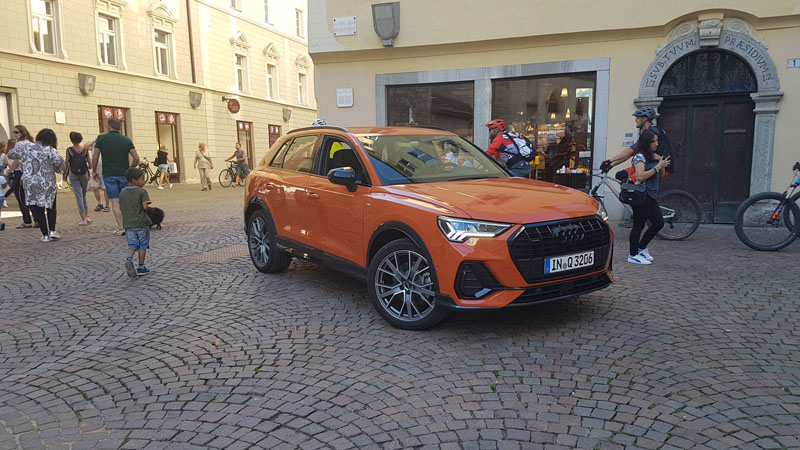 A swift ride, with more space for cargo

In an Audi-like fashion, the Q3 refuses to suffer from body roll through the tight turns and hills. Braking is outstanding; a moment of distraction called for a heavy application of the brakes due to a road hazard, and the Q3 executed the task brilliantly, leaving us unscathed with only a good scare.

However, the steering feels quite light, even when the drive selector is set to Dynamic mode – which slightly disrupted some “spirited moments”. Note that the suspension damping can be controlled thanks to an optionally available system.

Inside, designers have managed to build an interior with simple, inexpensive materials, while keeping an upscale feel. For instance, the optionally available suede-like Alcantra inserts in the dash break the pattern between plastic and aluminium, giving the dashboard a cool contrast.

The new screen is huge, and the upgraded infotainment is fast and very user-friendly. Induction charging has been added as an option, along with a powerful Bang & Olufsen sound system. 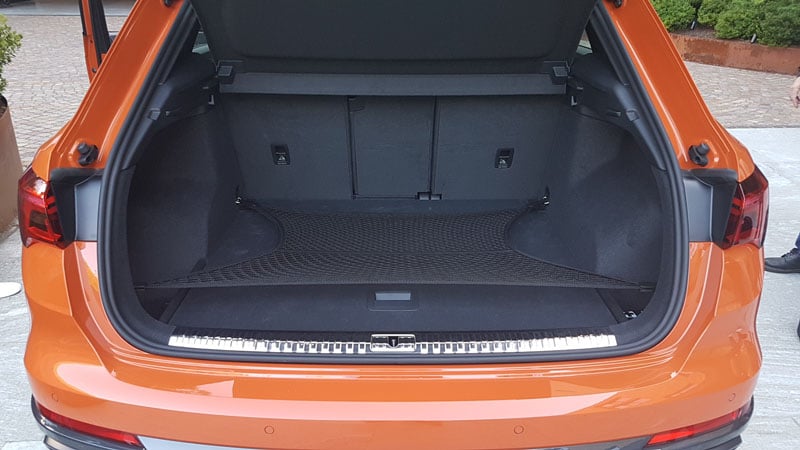 On the downside, the instrument cluster can seem busy and confusing at times when trying to find a specific information, but driving the Q3 over long periods of times will settle this small hiccup.

Thanks to its new dimensions, the Q3 provides more space for passengers and cargo, with 530 litres in the trunk and 1525 litres total when all seats are folded

But what about using the 2019 Audi Q3 for what its made for?

Like driving in the city? After speeding around the Tyrolians, we found ourselves completely lost in the enclosure of a village, at the peak of rush hour.

The situation was entirely unexpected and quite irritating, to say the least, but our navigation system took us through narrow cobbled streets where families were having a quiet meal on the patio, staring at us in disbelief.

And if you’ve ever driven in Italy, you know road signs are probably as useful as the passionate hand signs the village inhabitants make when they see you drive by their dinner.

This impromptu endeavour forced us to test the visibility in the city and in tight spots, as well as all the available safety and driver aids systems such as Park assist, Cross traffic assist rear and the 360-degree camera, that pretty much saved us from damages and arguments. 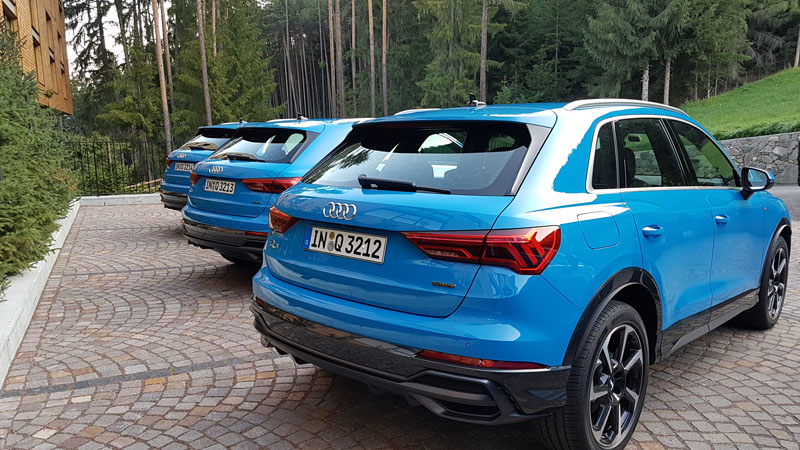 In the end, testing the Audi Q3 in the South Tyrol made a whole lot of sense. We walked out with two completely disparate experiences: primo, having to negotiate the streets, backing up through busy intersections and looking out for crazy drivers cutting through traffic put the Q3 and all its driver aid systems to the tests.

Secondo, we gave the Q3 a whirl in the twist and turns in the mountains overlooking steep hills at full speed, and learned that driving it feels like driving a sporty hatchback, in many instances.

The result is a small SUV with the Audi “bite”, that can master city driving. And depending on the price – which we will know soon enough – it will probably keep its reputation as one of the best in the segment.

The automaker has already signed an agreement with the federal government. Other sites in North America are still being considered. This will be...
Read more
Previous article2019 Acura ILX Preview
Next articleMcLaren Senna battles three motocross bikes in new Forza Horizon 4 promo

2022 Ford F-150 Lightning Pros - The power is addictive, and the big battery offers good range. - The Lightning is among the most refined full-size...
Read more
News