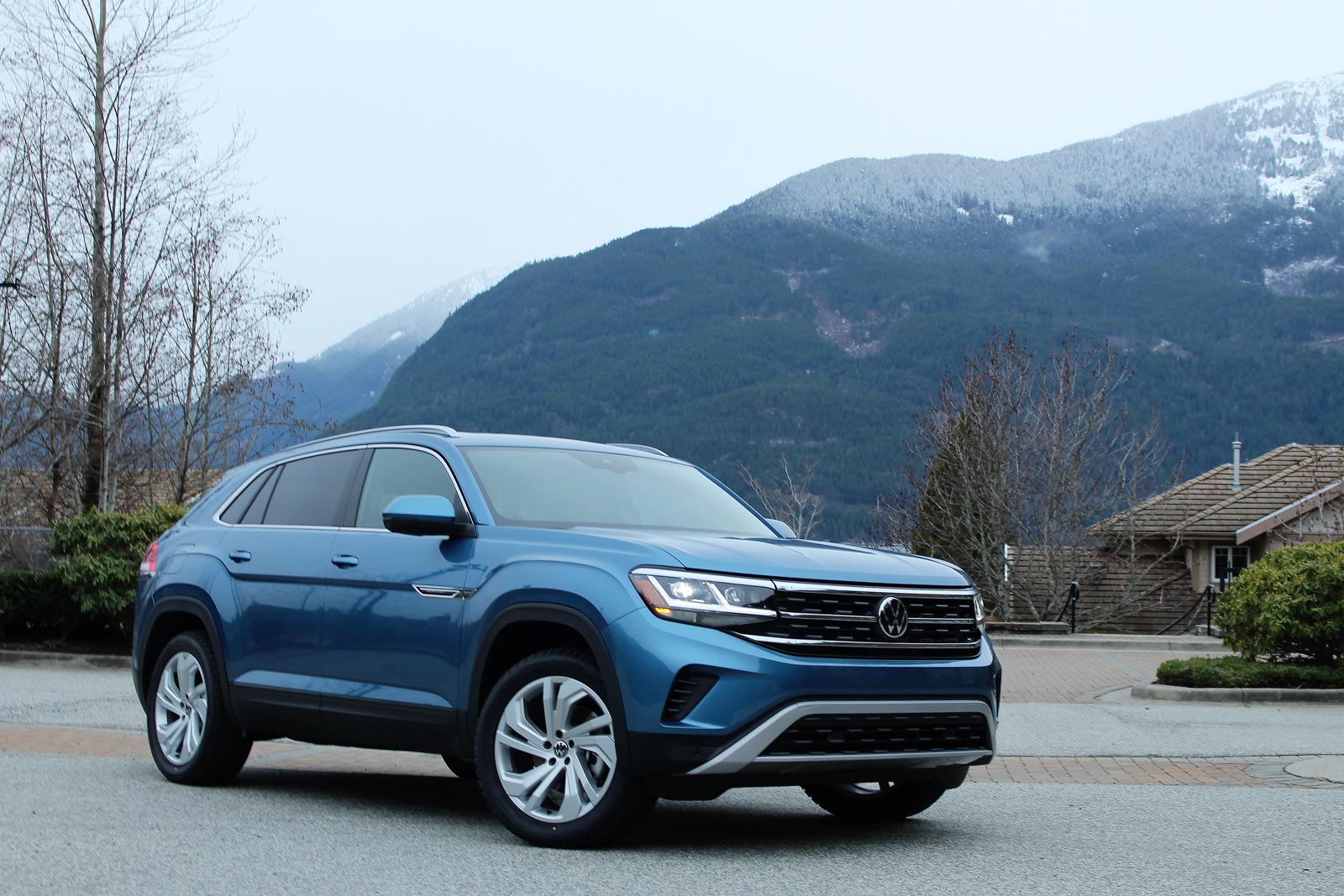 VANCOUVER, British Columbia – As SUVs and crossovers continue to gain traction in Canada and in the United States, Volkswagen figured out a clever and cost-effective way of cashing in on the five-passenger, midsize utility category it hasn’t occupied since it dumped the Touareg from its North-American portfolio. It simply created the 2020 Volkswagen Atlas Cross Sport using, well, the three-row Atlas’s architecture and mechanical components.

The Cross Sport is now arriving in dealerships, and will rival the Chevrolet Blazer, the Hyundai Santa Fe, the Ford Edge, the GMC Acadia, the Jeep Grand Cherokee, the Honda Passport and the Nissan Murano in the two-row, midsize vehicle segment. We can arguably throw in base variants of the Kia Sorento as well as the Toyota 4Runner and the Jeep Wrangler in this bunch. 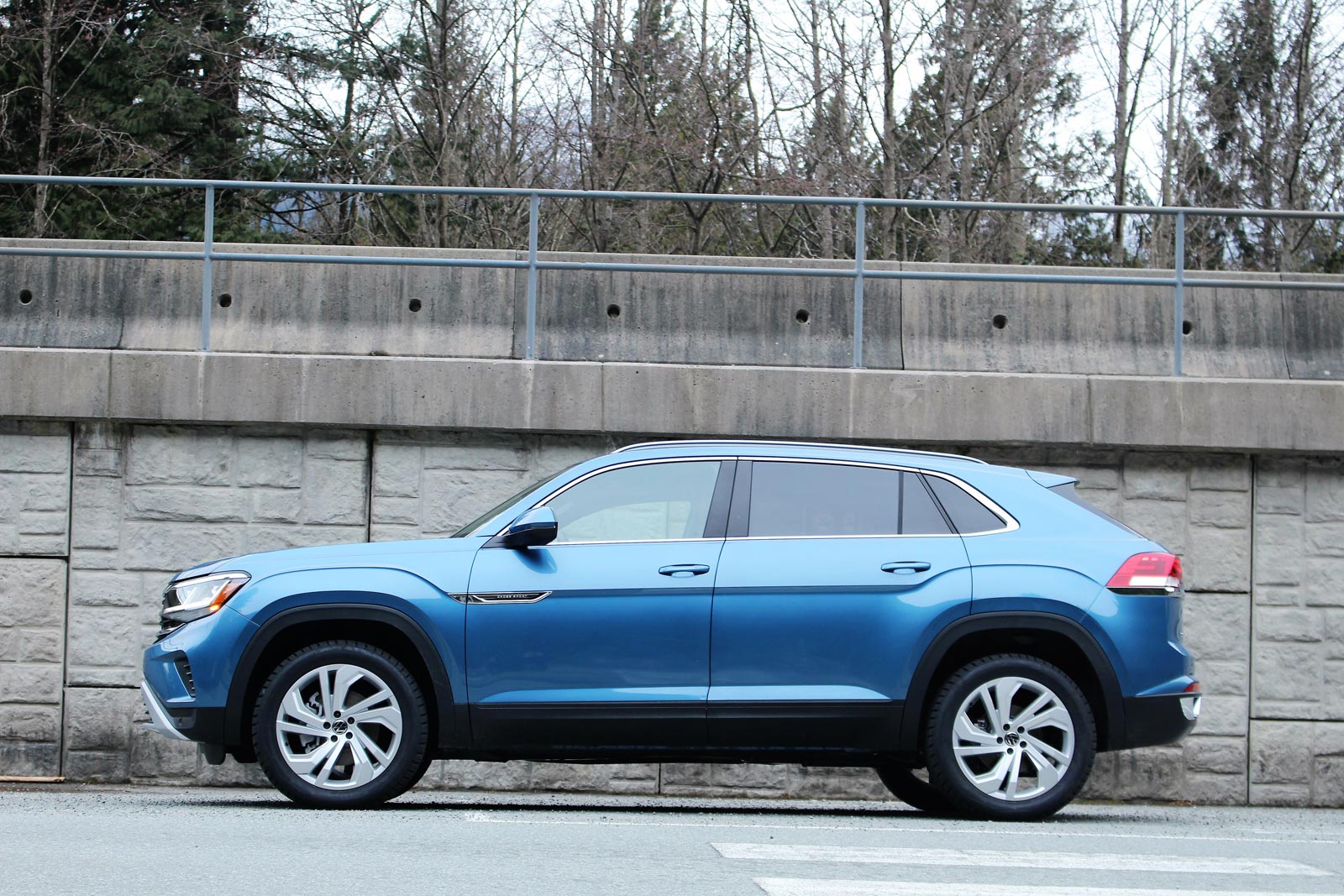 The Volkswagen Atlas is off to a good start, and according to the company, 88% of buyers are new to VW and their median age is 41 years old, while competitors’ products attract older folks. That means conquest sales for the brand, which is always a good thing.

However, there are consumers out there who would like a midsize SUV, but don’t need three rows of seats, and that’s why the 2020 Volkswagen Atlas Cross Sport was introduced. Empty nesters are expected to be attracted to this five-passenger version of the crossover, which obviously means a higher average buyer age.

That doesn’t mean the Cross Sport isn’t fit for families, because it is. The second-row seating area boasts plenty of legroom and a generally spacious atmosphere, further enhanced by the power panoramic sunroof that’s offered on all trims expect the base Trendline.

Up front, there’s very little to indicate that we’re riding in the five-seat Atlas instead of its six- or seven-seat counterpart. Ok, there are a few differences, such as the new steering wheel that wears the brand’s redesigned logo—the Cross Sport is the first model in North America to get it—along with door panel stitching and different seat trim. But that’s about it. The 2021 Volkswagen Atlas, which was revealed at the recent Chicago and Toronto auto shows, will get some of these upgrades as well. 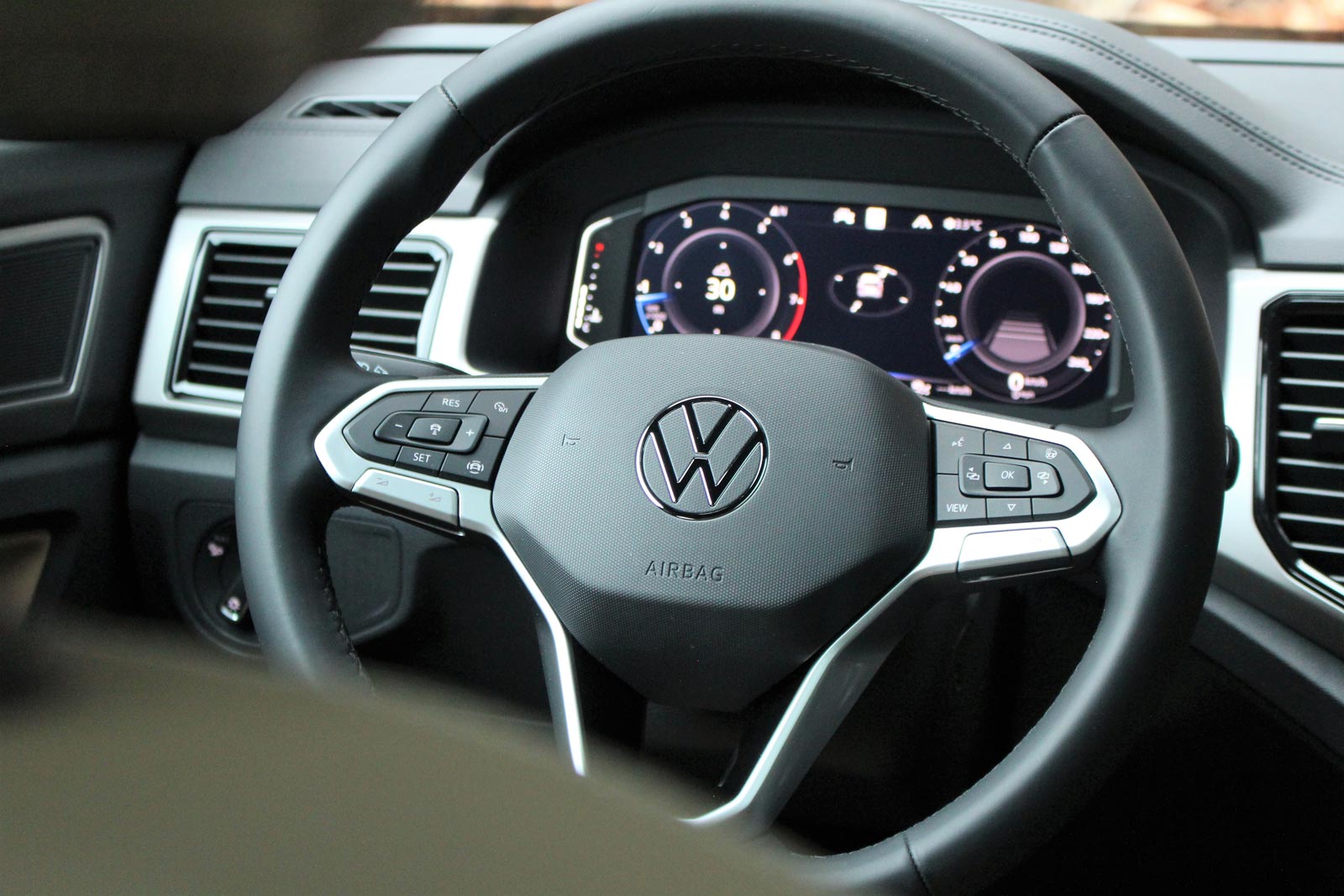 The oh-so-familiar climate control rotary dials and buttons are still present and accounted for, which admittedly are easy to use while driving. While the base trim gets a 6.5-inch infotainment system touchscreen, the rest benefit from a more enjoyable 8.0-inch display, in addition to more USB ports for everyone to keep their portable devices charged. The excellent 12-speaker, Fended-brand sound system can only be found in the top-shelf Execline, which is a shame.

The 2020 Volkswagen Atlas Cross Sport is 59 mm shorter in overall length than the three-row 2021 Atlas—whose redesigned bumpers will add another 75 mm or so to the SUV compared to the previous model year. However, both ride on the same wheelbase, and the Cross Sport has a huge cargo hold with a volume of 1,141 litres when the rear seatbacks are in place, and 2,203 litres when they’re folded flat. That’s more than in most of its aforementioned rivals, although on par with the Acadia and less than in the cavernous Passport.

Opinions may obviously differ from one person to another, but we think the 2020 Volkswagen Atlas Cross Sport looks pretty good with its wide stance and relatively low roofline, along with its creased wheel arches, giving it a brawny posture. Like a three-row Atlas that has been training regularly at the gym for the past year. And in this category, the ruggedness of an SUV’s design is just as important as its versatility.

Speaking of muscle, the 2020 Volkswagen Atlas Cross Sport includes all-wheel drive as standard in Canada, and is available with one of two engines. The base turbocharged, 2.0-litre four cylinder develops 235 horsepower and 258 pound-feet of torque, while the 3.6-litre narrow-angle V6 produces 276 hp and 266 lb.-ft. 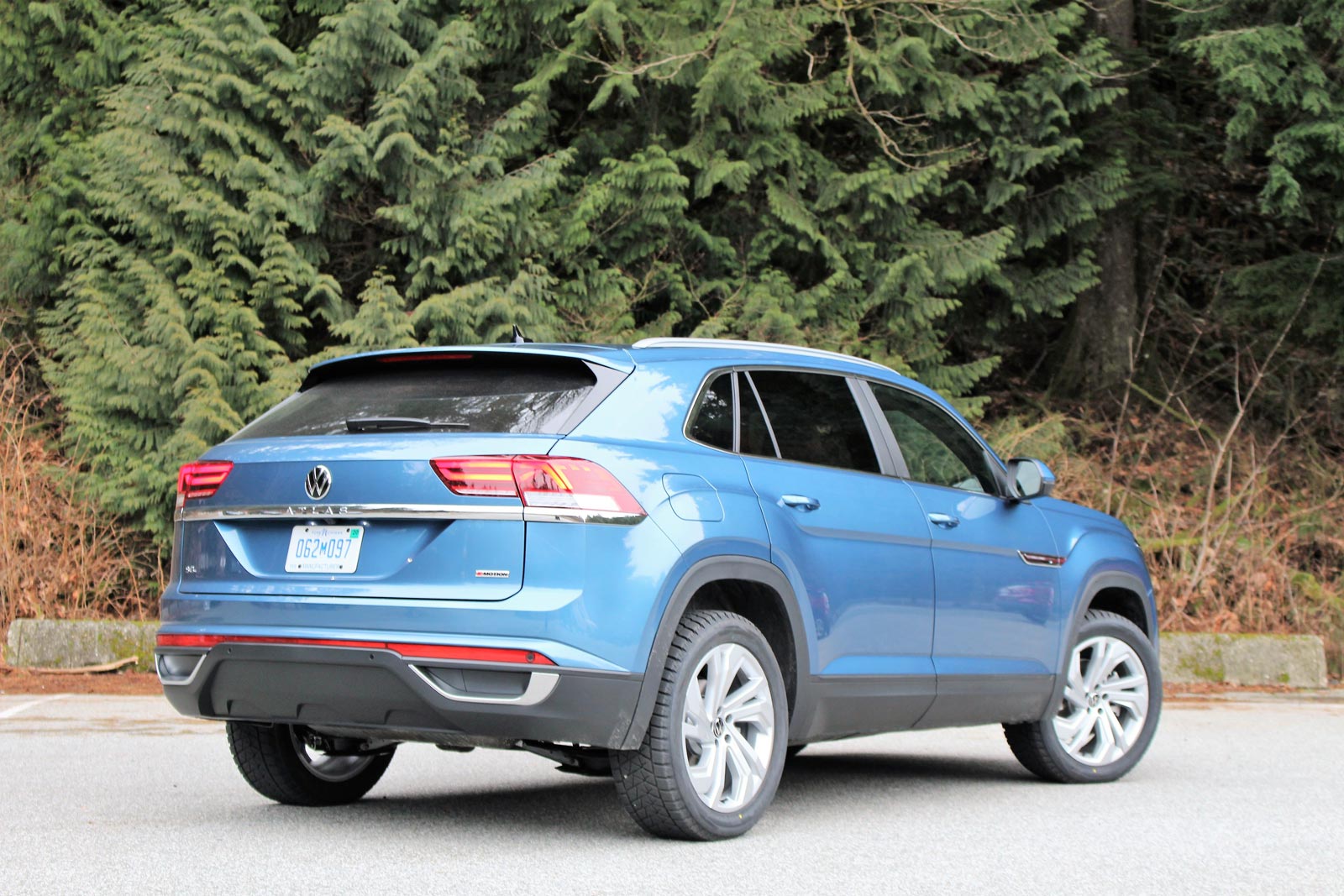 The 2.0-litre turbo is up to the task of moving this 4,300-pound crossover along swiftly, and although it’s relatively well-mannered, it isn’t as smooth as refined as the VR6. Simply put, empty-nesters who drive mostly around town can be happy with the four-pot engine, but if the vehicle is frequently loaded with occupants, the six will be a better option. In addition, the latter can tow up to 2,268 kg (5,000 lbs.) while the four’s max rating is set at 907 kg (2,000 lbs.).

There are no differences in suspension and steering tuning between the two Atlas variants, so even though the Cross Sport has the word “sport” in its name, it doesn’t boast more dynamic driving characteristics than the regular Atlas.

What would be great is if the 2020 Volkswagen Atlas Cross Sport would be more fuel efficient. With a combined city/highway rating of 12.7 L/100 km, the only rival that consumes more gasoline is the archaic 4Runner. Even the 2.0-litre engine in the VW is a hog with a combined average of 11.7 L/100 km, while its four-cylinder competition consumes between 10.0 and 10.7. Still, Volkswagen Canada figures that the base engine will account for 30% to 35% of Cross Sport sales. 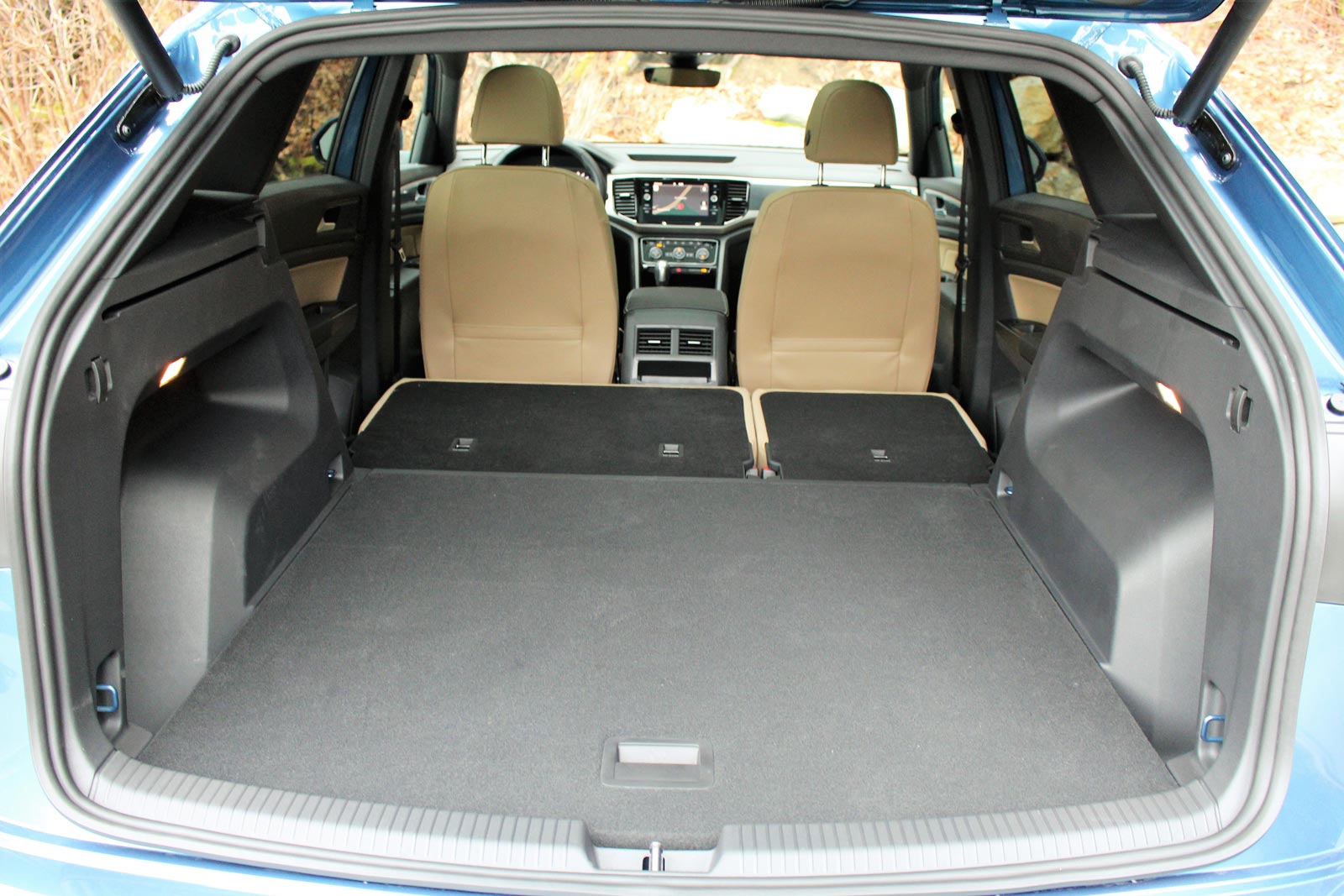 That’s not the only gripe we have with the Cross Sport. Some interior materials look and feel low-rent, although many of those are placed in areas below our general line of sight. Our opinion may be negatively influenced by the fact that the old Touareg was a more premium vehicle—but a more expensive one, too.

Its price ranges from $38,995 to $54,495 before tacking on freight and delivery charges of $1,885. An R-Line appearance package is available for an extra $1,690. Standard features include blind spot monitoring, autonomous emergency braking and heated front seats, but the $47,395 V6 Comfortline seems to be the best deal overall, with adaptive cruise control, dual-zone climate control, a power liftgate and a heated steering wheel.

Overall, the 2020 Volkswagen Atlas Cross Sport is a fine two-row midsize SUV. It looks sporty, it drives well and it’s got plenty of interior space. But while it stands out in its segment from a design perspective, it’s not more affordable than its competitors, and will end up costing more in fuel. Then again, since the three-row Atlas is doing well, we see no reason why the two-row variant shouldn’t.

Refresh should include new styling and new MBUX No revolutionary changes expected for mid-cycle update Mercedes-Benz just teased its next model, but this one's...
Read more
Previous article400 horsepower for the next Subaru WRX STi?
Next articlePolestar Shows the Precept Prototype Ahead of Geneva Debut