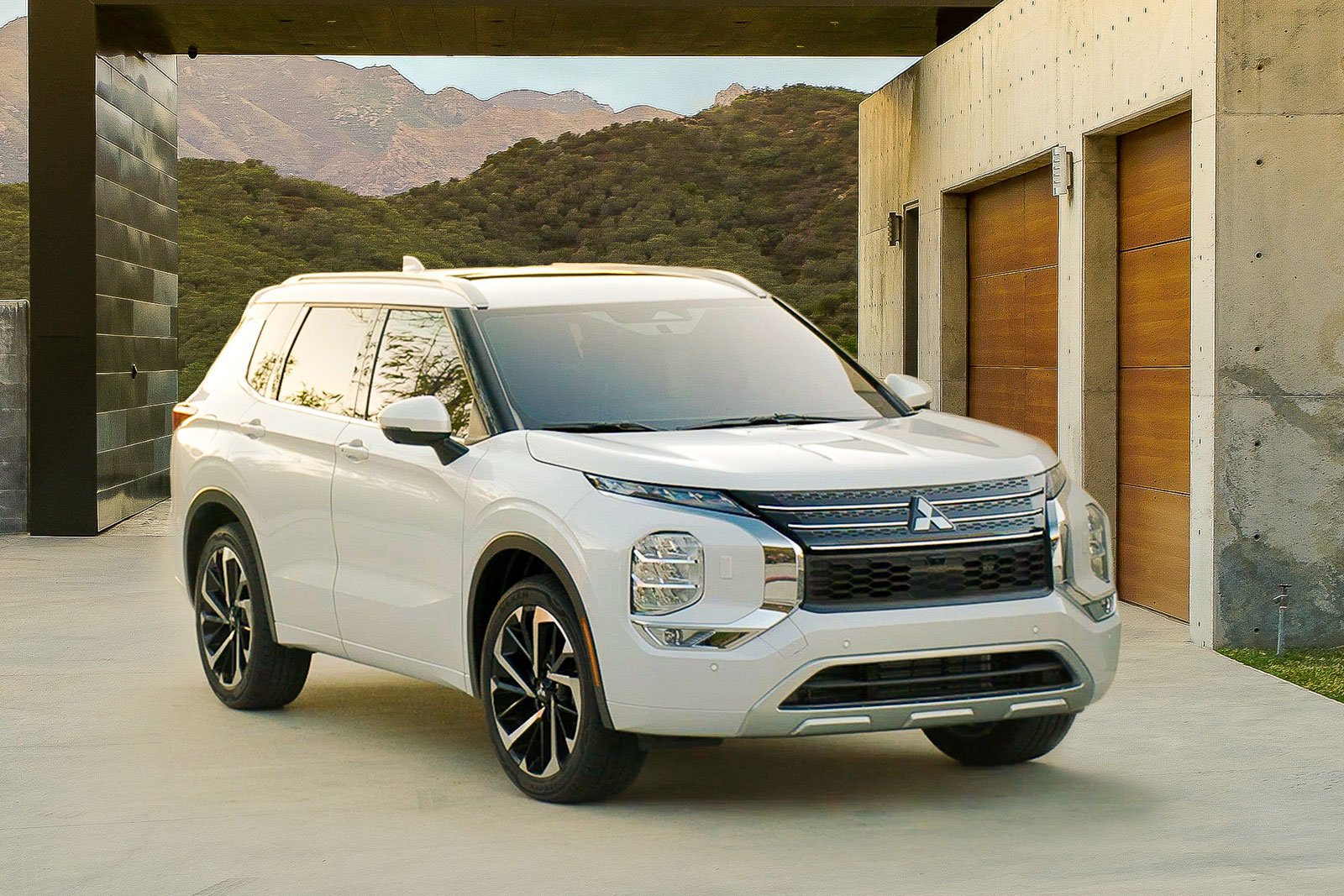 The compact crossover segment is one of the most popular in North America, and manufacturers who don’t keep their products in shape in this hotly contested category risk being rapidly forgotten. Luckily for the Japanese manufacturer, the 2022 Mitsubishi Outlander is all new and seems ready for a fight.

It boasts all-new sheetmetal, but the significant change here is that the new generation has a wider, more muscular stance, which is a welcome change compared to the outgoing Outlander’s narrow, disproportioned body. 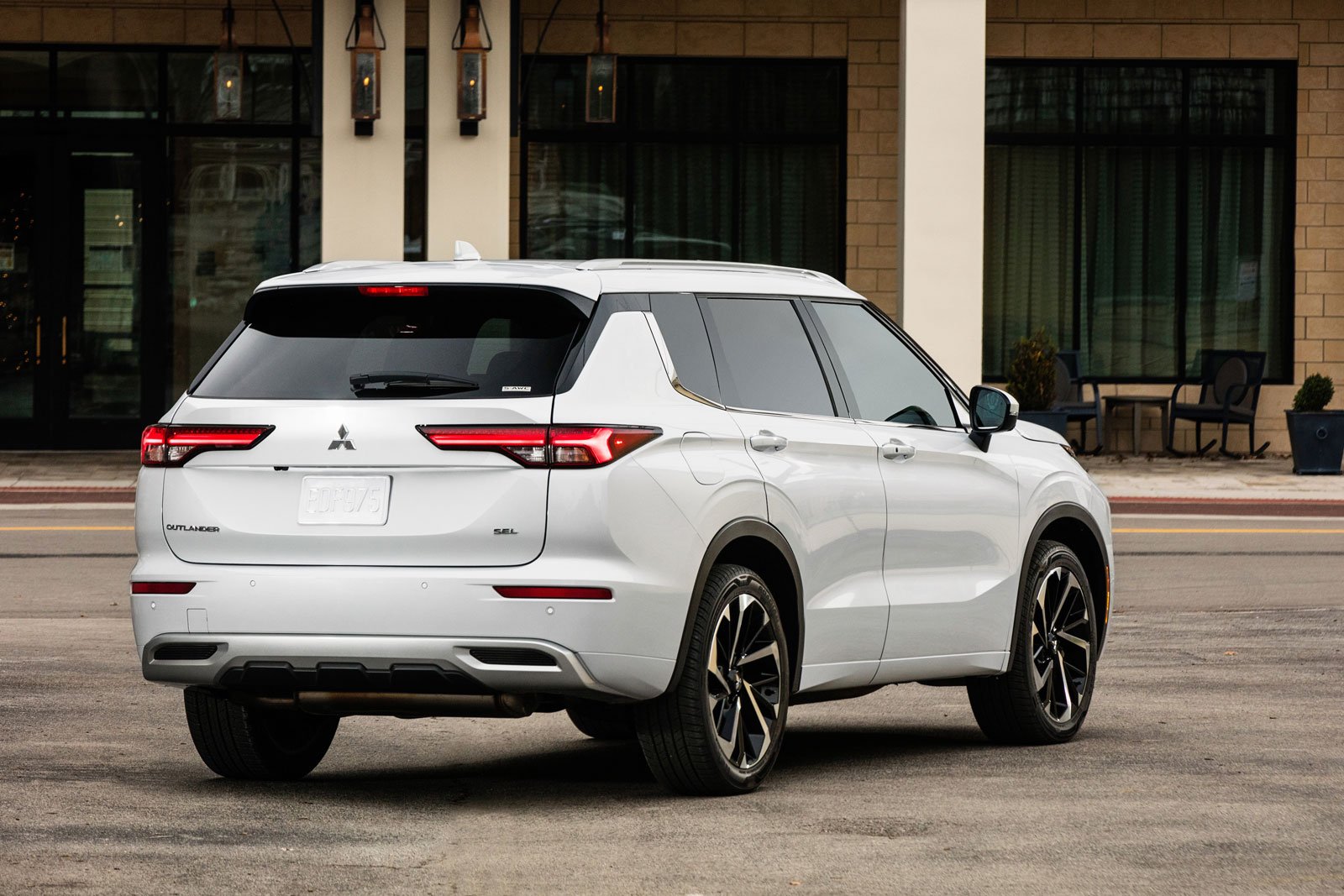 The 2022 Mitsubishi Outlander shares its platform with the new Nissan Rogue, which just makes sense from a development cost point of view as both brands are part of the same alliance. However, no body panels are shared, and the Mitsu wears a longer rear overhang, helping it offer more interior space and keep its available third-row seat for a capacity of up to seven passengers—a rarity in the compact crossover segment that includes the Honda CR-V, the Mazda CX-5, the Toyota RAV4, the Chevrolet Equinox, the Subaru Forester, the Ford Escape, the Hyundai Tucson, the Volkswagen Tiguan and many others. 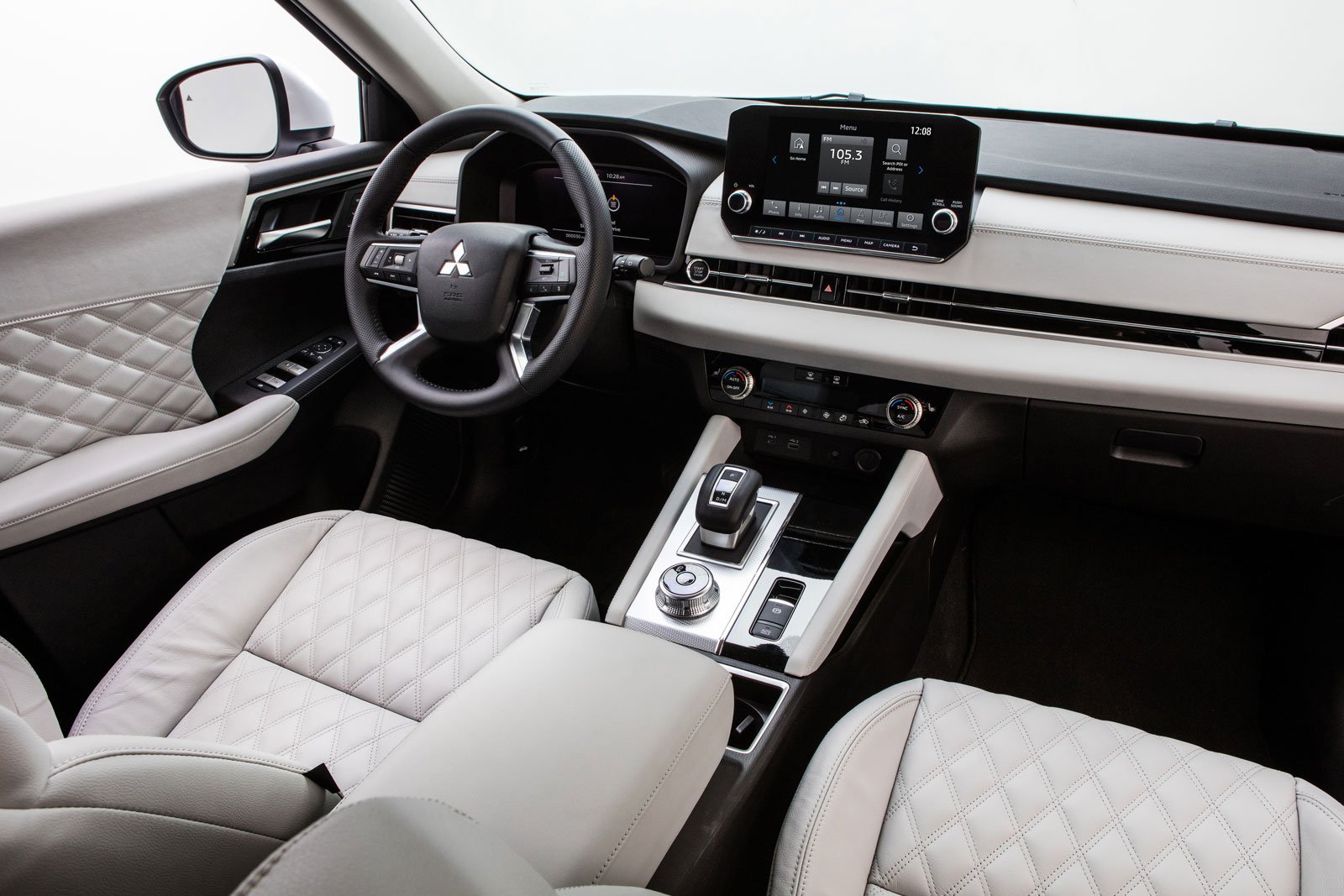 The Outlander’s cabin has been fully redesigned, with a modern new dashboard that boasts padded and stitched leather surfaces in uplevel trims. Meanwhile, the seats and door panels are covered in quilted leather upholstery that wouldn’t look out of place in a luxury-brand crossover, while fabric with and without suede-like accenting are also available. The fancier variants of the Outlander also get a fully digital, 12.3-inch driver instrument panel and 10.8-inch head-up display, along with a 9.0-inch infotainment touchscreen and a 10-speaker Bose stereo. Wireless Apple CarPlay, wired Android Auto and Amazon Alexa integration are also available. 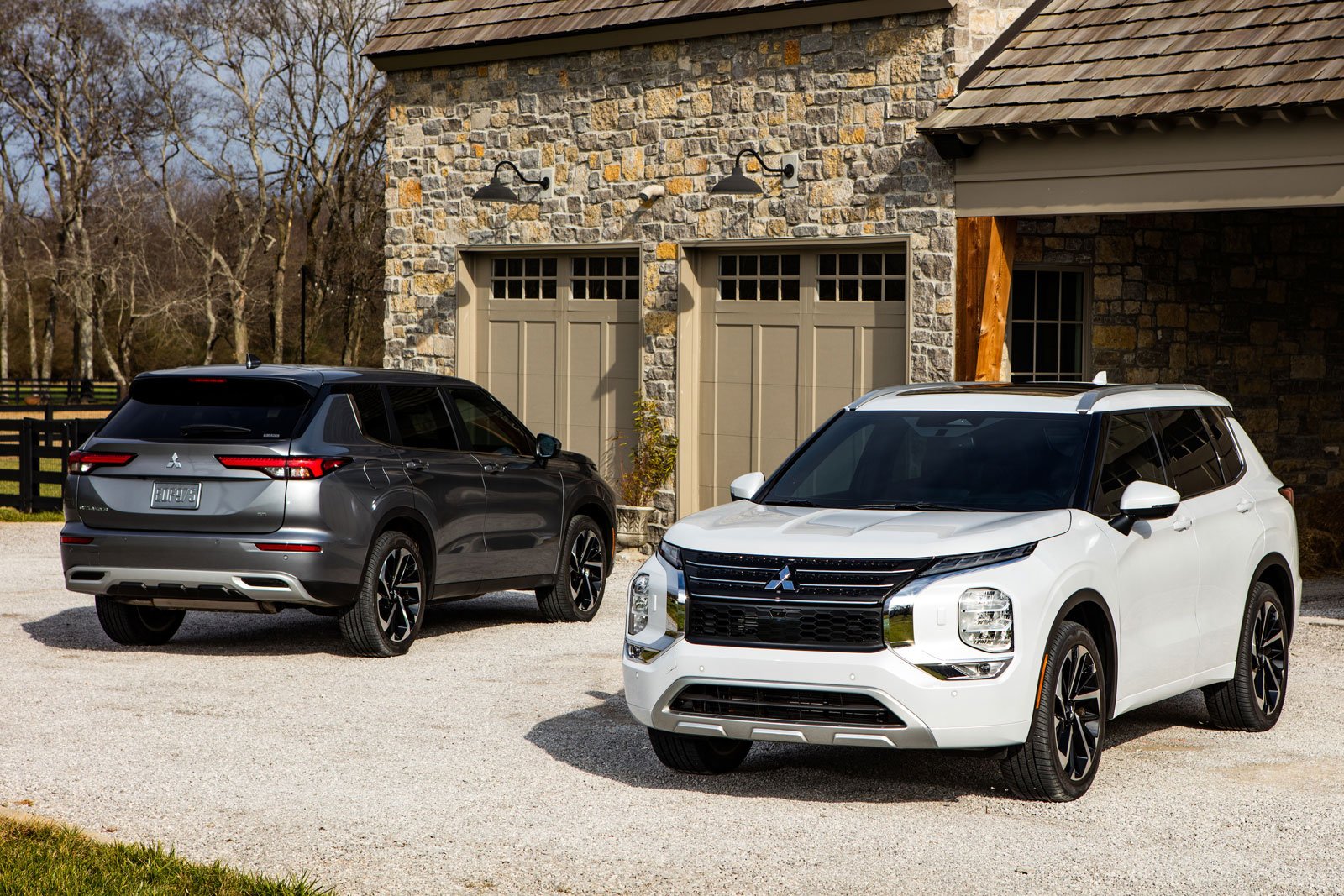 Thanks to increases in every outer dimension, there’s more space inside, especially regarding shoulder and hip room. The cargo area floor is now wider and flat to make loading bigger objects easier.

On the safety front, the 2022 Mitsubishi Outlander will feature 11 airbags as standard, including a front center airbag that protects occupants from colliding with each other in the event of a side collision. The usual active safety features will be offered as well, such as autonomous emergency braking front and rear, blind spot monitoring, rear cross traffic alert, adaptive cruise control, lane departure warning and lane keep assist, driver attention alert, a 360-degree camera system, traffic sign recognition and high beam assist. In addition, there’s a new semi-autonomous system called MI-PILOT Assist that can follow its lane on the highway as well as immobilize the vehicle in heavy traffic and getting it moving along again on its own. 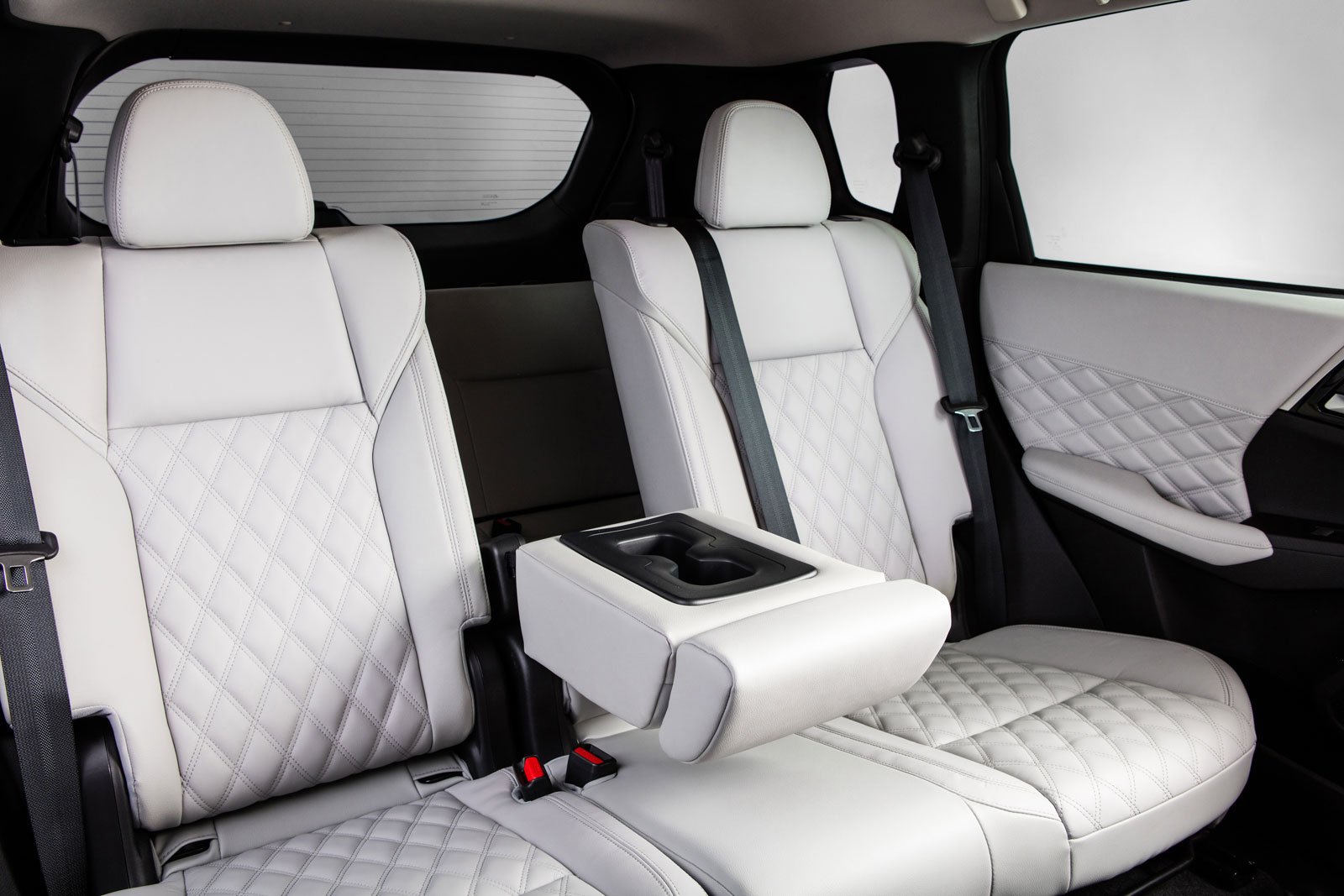 The Outlander not only shares its architecture with the Rogue, but its powertrain as well. Its 2.5L inline-four produces 181 horsepower and 181 pound-feet of torque, just like in the Nissan. The engine is connected to a continuously variable automatic transmission with a manual mode and eight pre-programmed gear ratios. Towing capacity is rated at 2,000 pounds or 907 kilograms. As mentioned in earlier reports, the Outlander PHEV will soldier on in its current form for the 2021 model year and possibly 2022, before the plug-in hybrid system makes its way into the new generation of the crossover.

A front-wheel drivetrain will be standard in the United States, while AWD will be the only way to go in Canada. Uplevel trims will get the brand’s proprietary S-AWC (Super All Wheel Control) which can shift torque front to back as needed, but also from one rear wheel to the other to maximize traction and enhance handling. The Outlander also offers six drive modes that are selectable via a console-mounted dial, including Normal, Eco, Tarmac, Gravel, Snow and Mud. The brand also states that the new suspension is lighter and stiffer, ride quality has improved, NVH (noise, vibration, harshness) has been reduced, the brakes are more effective and the steering system is more responsive.

Pricing starts at $25,795 before freight and delivery charges in the U.S., but the Canadian MSRP has yet to be announced. The new 2022 Mitsubishi Outlander is scheduled to go on sale in April.