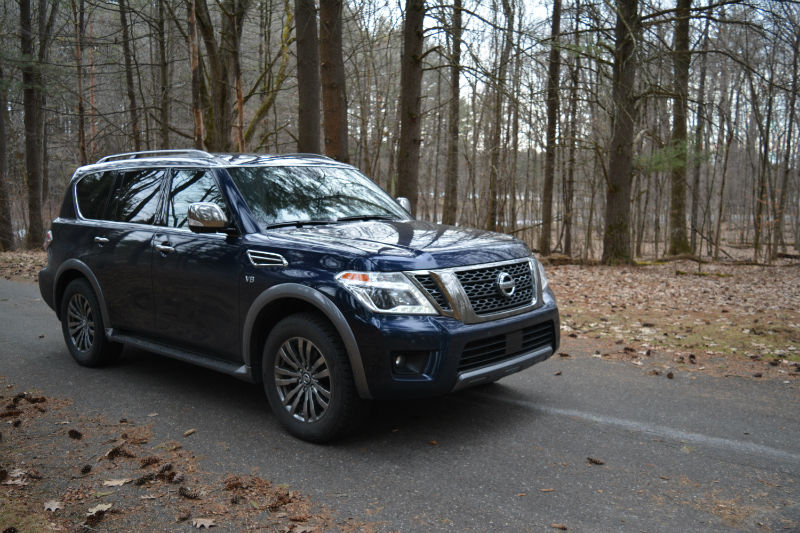 I undertook my longest-ever road trip with this 2018 Nissan Armada. Over five days, it, my family and I covered more than 2,750km. In that time, we became very intimate with one another and like any good relationship, there were both highs and lows.

Massive three-row SUVs are not all that common in the greater Montreal area. The exceptions are the Lincoln Navigator and the GMs as they are the go-to options for car services. While Dodge Durangos, Ford Expeditions, Toyota Sequoias and Nissan Armadas are overlooked in favour Dodge Journeys, Ford Explorers, Toyota Highlanders and Nissan Pathfinders here, our neighbours in the South love all of the abovementioned trucks.

Whether in rural Virginia or New York, the Armada and my crew felt very comfortable and well served by the Nissan’s power and space. Its impressively long list of features kept us comfortable and “infotained” however the truck’s relative age was obvious in the occasional instance when its overall refinement was put to the test.

The second-generation Nissan Armada was launched for the 2017 model year. Although its current styling is far more eloquent than the previous Pathfinder Armada, the truck retains a very robust appearance. In fact, compared to the current legendary Patrol, only the longer overhangs on the Armada stick out. 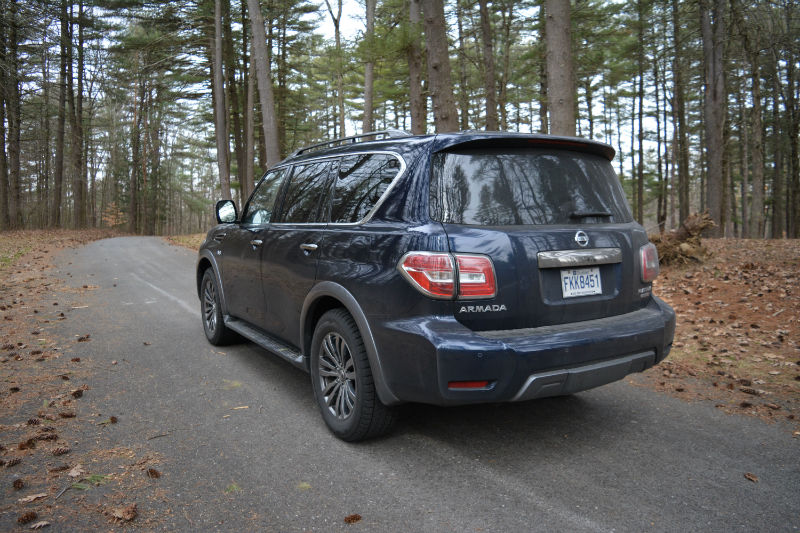 The new Infiniti QX80 was just refreshed and despite looking far better than previous, the Armada’s Nissan badge suits the big SUV far better. The Nissan’s humble roots are not masked by a ginormous grille and excessive chrome; I appreciate the honesty. On the topic of chrome, my Platinum Reserve tester features Dark Chrome exterior trim and wheels. Of the three available colours, Hermosa Blue is the most expressive and blends beautifully with the Dark Chrome.

The cabin’s highlight, other than a hangar’s worth of room, is the two-tone black and brown leather seats combined with real wood trim. The dashboard’s layout is fairly straightforward and quickly becomes easy to navigate. The fit and finish are easily Infiniti-worthy, especially in the Platinum Reserve thanks to its unique contrast stitching. I enjoyed the disparity between the relatively simple Nissan exterior and the very upscale interior.

The principal reason for undertaking this road trip with the Armada is the vastness of its cabin. The trunk, with the third row stored, offers up to 1,413 litres of usable space. Even if I’ve become quite the trunk-Tetris expert, I wasn’t planning on spending the better part of a Jessica Jones episode making everything fit. 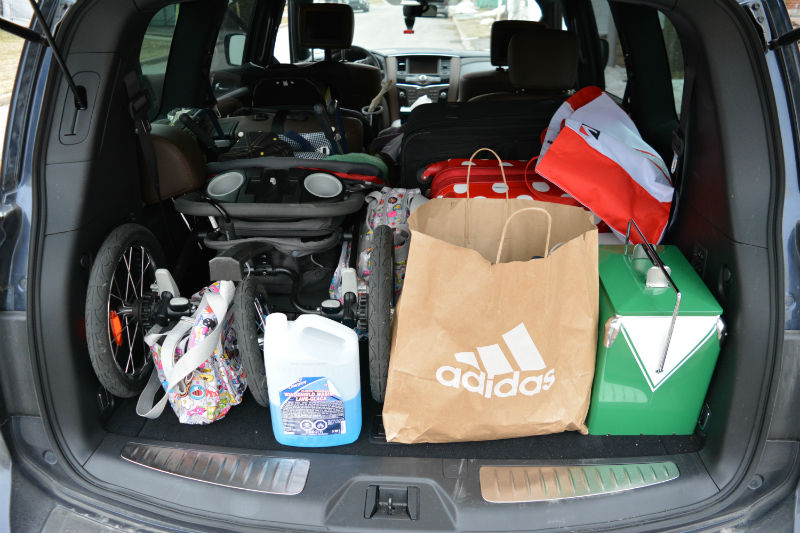 With that sorted out, making use of the immense amount of storage in the first two rows was very satisfying. One of the features that differentiates the Platinum Reserve from the other two trims is the twin captain seats in the second row. The centre portion is a huge bin with two accesses ideal for storing tablets, headphones and the like. Up front, we find an equally large bin, multiple containers for pocket change, phones and more. In fact, so numerous are these areas that unloading the truck took longer than getting ready to leave.

The seats are enormous. This presents equal amounts of pros and cons. So vast are the lower cushions that passengers can, when removing shoes of course, sit Indian style. The downside is that the perches offer no lateral support. When the driving gets a little spirited, the passengers have little help to keep them in place.

Given that nearly everything is standard in the Armada, spending any amount over the base SL’s $64,998 asking is difficult to justify. While the heated and cooled front seats, Dark Chrome accents, extra active safety features and second row entertainment system are nice, they are insufficient to justify the $10,000 premium for the Platinum Reserve.

The Armada SL’s value proposition comes under fire from a Dodge Durango Citadel with HEMI and other options for just over $64,500. Its trunk is down by 64 litres and the power output is lower, but its 8-speed transmission improves on fuel economy. Competing with the Platinum Reserve is the Ford Expedition Limited with a few options at $76,844. The level of technology is far greater and includes a 4G Wi-Fi hotspot and 10-speed transmission. On paper, it too is better on fuel.

While fuel economy is important, it is difficult to fault a healthy and powerful V8 engine. The Armada’s 5.6-litre unit provides 390-horsepower and 394 lb.-ft. of torque. Mated to a 7-speed automatic transmission and an intelligent 4×4 system (aka AWD) with a 2-speed transfer case, the big Nissan can do it all. 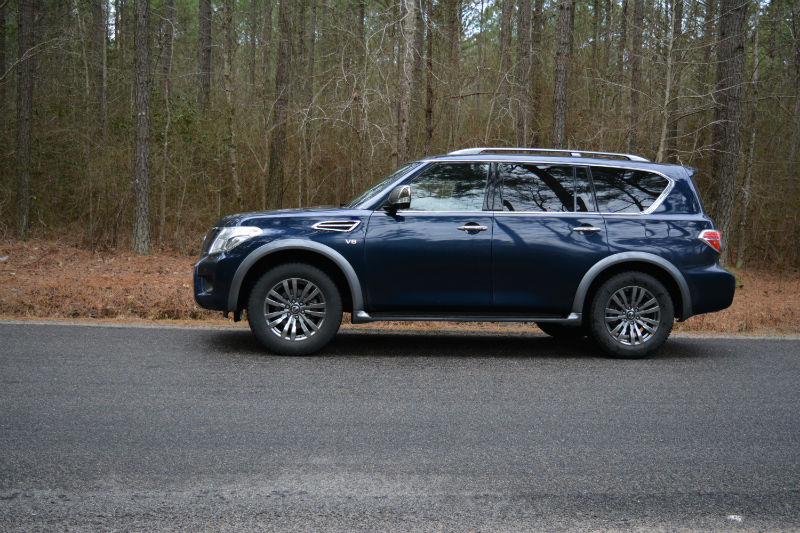 The V8 runs in one of two modes, and no, there are no “drive modes” per say. When driving, gently rolling onto the throttle results in lazy, unrushed acceleration. The “box will not downshift, speed climbs slowly, all of it in a very refined and civil manner. However, if you need to pass someone or plainly accelerate hard, mashing on the go-pedal awakens the endurance V8. The transmission instantly drops two maybe three gears, revs rise at or above 4,000 rpm and the Armada launches forward with frightening ferocity. The rear-end squats and the engines belches a cacophony of roars.  Other auto media have measured a 0-60 mph sprint time of just under 6.5 seconds. I tend to believe it.

The addictive power, and the thirst for fuel, are great. What’s not as wonderful is the truck’s ride quality. It too, comes in two phases. On the highway, the truck glides and floats over undulations. Meanwhile, spirited driving is possible on a recently paved road; the suspension expertly monitors body roll providing higher than expected cornering speeds. Obviously, the truck does display some roll! Physics and gravity are tough to beat in a 6,000lb (2,728 kg) truck with 9.2” (23.37cm) of ground clearance.

When the road’s surface is less than perfect, the Armada loses its composure. It’s as though the hyper-stiff springs disagree with the complaint dampers as to what needs to be done with the amplitude changes. From where I sat, the springs win as the ride gets crash-y at times, shaking up the contents of the truck. The new Infiniti QX80 has a new Hydraulic Body Motion Control system that might improve on damping and comfort. Perhaps the Armada will get in the future.

It is not unusual for full-size trucks to live on for years with few significant changes. The existing Durango is nearly eight years old while the Sequoia is closing in on 11 years of age! If these were high-volume cars or crossovers, their respective companies would be in serious trouble. The 2018 Nissan Armada’s skin might be new, but it is based on the F-Alpha platform which dates back to the mid-2000s. What it lacks in technology, it makes up in character and honest performance. Don’t get caught going upscale in trim. If that’s the desire, look into the Infiniti QX80.

Previous images shown by Hyundai were either from the Prophecy concept or from prototypes The official reveal could take place tomorrow The electric...
Read more
Previous articleAlfa Romeo to launch a super-powered Coupé version of the Giulia
Next articleThe future of car servicing