News 1st ever Ford Mustang still with the original owner!

1st ever Ford Mustang still with the original owner! 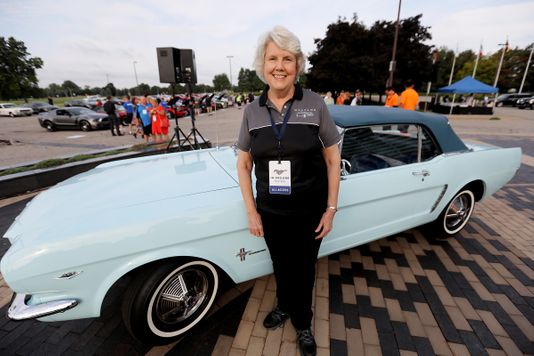 This will one day make a great Hollywood feel-good movie. Get this, Gail Wise bought the new 1964 Mustang convertible on April 15th, 1964 with a loan from her parents. The Mustang was to be reveled on April 17th of the same year at the World’s Fair in New York by Lee Iacocca and in preparation for “It’s coming”, Ford distributed the then very secretive sporty car to a number of its dealers.

Gail walked into Johnson Ford on Cicero Avenue on that faithful day and took delivery of her Wimbledon white 3-speed manual 164-horsepower V8 convertible. Although Ford was running many adds on the Mustang, no one had ever seen the car, and here was Gail driving about in her brand new car, two days ahead of the global reveal.

The car serves as the family transport (for four kids!) until it stopped running in 1979. Gail’s husband decided to keep the car as a future retirement project. Today, the car has been fully restored, not modified, and according to Hagerty, the ’64 Stang is worth between $350,000 and $450,000. We think it’s worth far more.

Like we said earlier, this’ll make great movie one day.

The Hyundai N Vision 74 is the coolest concept in a while. The 2023 CIAS will mark the RN22e’s global auto show debut. ...
Read more
Previous articleThe constantly evolving ICE
Next articleHow much do you really love all the tech?