The mid-cycle facelift, which arrived for the 2014 model year, is also old! And despite this, the Grand Cherokee remains one of the best-selling midsize SUVs in North America, bested only by its Wrangler stablemate, and the equally old, yet more recently updated (2016), Ford Explorer. So, make that two exceptions.

What the Grand Cherokee has going for it is 25 years of recognition as one of the best of the best in its segment. It has also always been one of the better looking SUVs, and this still applies today. 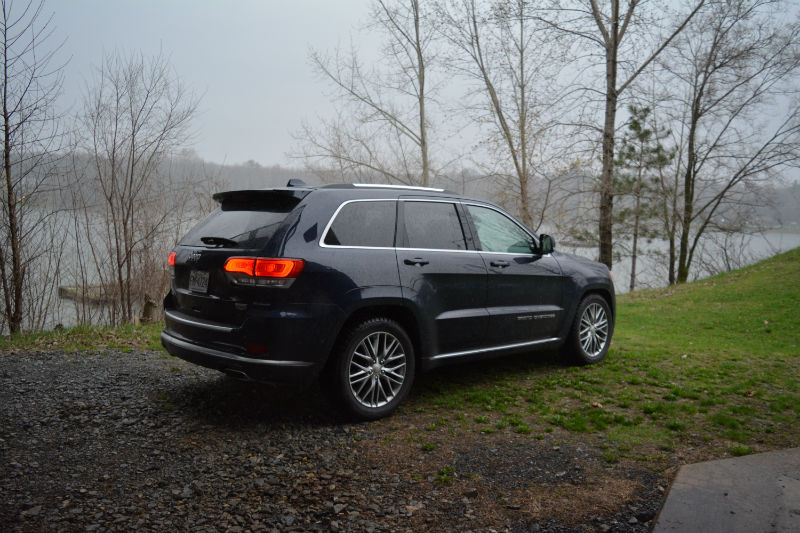 There’s nothing boisterous about the outer shell but the simple boxy design and the all-important seven-horizontal-slat grille make for a handsome, generally simple-looking truck. Moving up in trims adds a little pizzazz. My top-line Summit tester includes 20” wheels, LED lights and the optional body-colour everything with platinum-chrome accents.

The cabin’s no younger than the body but it too is ageing beautifully. Once more, the secret lies in the tasteful and simple approach. The dashboard is easily accessible with a generally ergonomic layout. There’s redundancy in nearly all controls so if you prefer working through the 8.4” display, it’s all there.

Here, FCA’s UCONNECT is accessed through equally simple menus. Functionality is intuitive and almost fun. You get Apple CarPlay, Bluetooth, satellite radio, it’s all included depending on trim. One design aspect that I enjoy is the physical shifter, as opposed to a rotary wheel. Although, having said that, I’m convinced the next generation Grand Cherokee will get such as wheel…

The 2018 Jeep Grand Cherokee is a true five-seater SUV. The rear bench is wide and can even handle two adults, and a considerably large baby seat. Behind the bench, the trunk opens up to just over 1,000 litres of cargo volume. I was unable to find any details pertaining to the loss in volume because of the optional audio system. Maximum boot volume is of 1,930 litres. 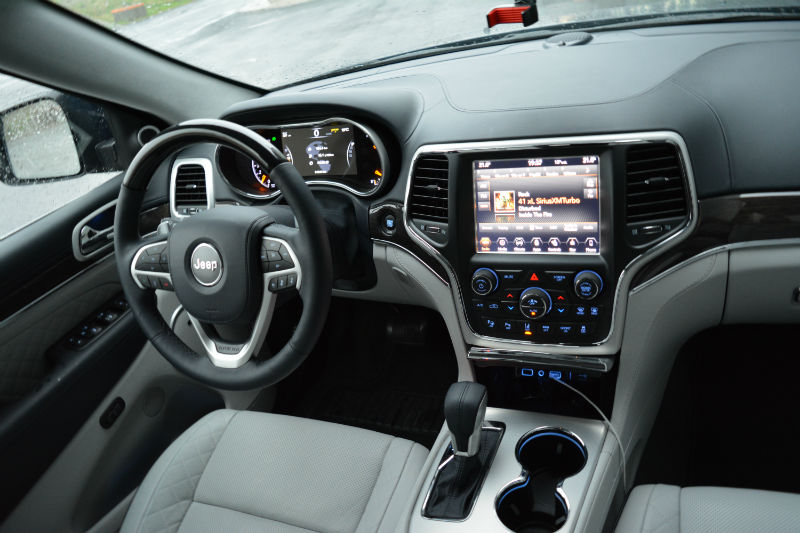 Up front, the Natura leather covered seats are cozy. The multiple power adjustments help find an ideal driving position although, unless the driver’s seat is raised high, the extremely wide base of the “A” pillar seriously cuts visibility.

There’s plenty of room here however. I do like how the central-tunnel allows plenty of knee-room width-wise. Storage, on the other hand, is limited. The armrest is compromised but the presence of the DVD player, as part of the optional rear-entertainment system.

At $39,895, the base Jeep Grand Cherokee Laredo is still loads of truck. With the right options, namely the off-road group, and a set of 18” wheels, the Laredo can still be quite substantial.

There are eight ways to dress up your Grand Cherokee and I’m not sure I’d go for the Summit if only because the Trailhawk exists. Otherwise, the Trackhawk. I like Hawks…

The Summit begins at $62,045 and includes loads of stuff such as adaptive cruise control, steering wheel paddle shifters, Harman/kardon audio with 19 speakers, the fancy leather and more. My tester was loaded with the HEMI, Premium Plus appearance group, rear entertainment system, and the full leather interior for a grand total of just over $78,000.

Up in this price range, the Jeep nudges up against the likes of the BMW X5 and the Mercedes-Benz GLE. On a lease payment, it’ll be tough to be convinced that the Germans are not worth it…

The standard 3.6-litre V6 is more than adequate for the application. The realistic bump in price to get the 5.7-litre HEMI V8 is $10k as it only becomes a $3k option with the Limited. Thing is that its 360-horsepower and 390 lb.-ft. of torque are addictive. For the EcoDiesel 3.0-litre-V6, you need to select the Overland trim which raises the price to nearly $70k. However great the diesel engine is, it’s a tough sell. 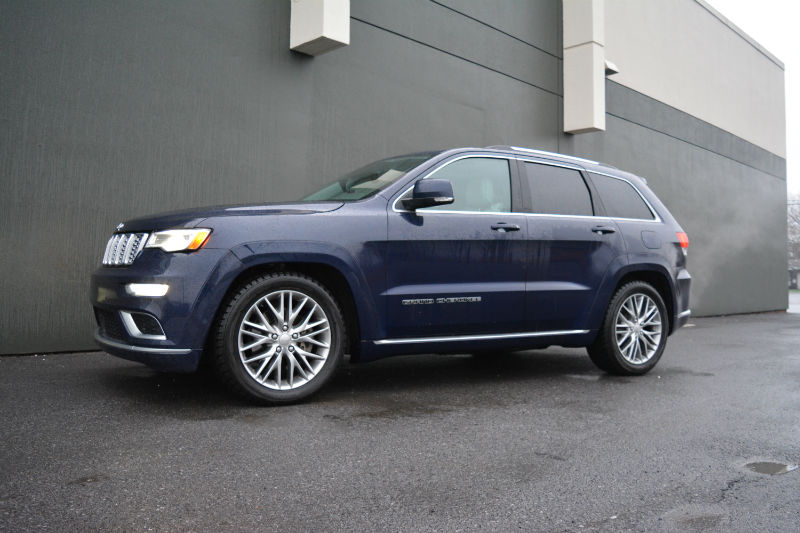 With all of these engines comes a dynamic and efficient 8-speed automatic transmission. This wouldn’t be a Jeep is it did not include some form of 4X4 system. The Summit gets the Quadra-Drive II 4×4 system which means it has a low range, and all kinds of other trickery to get you in, and out, of tough spots.

On the road, the HEMI pulls hard when required or simply lulls along, happy to have a job. One way or another however, fuel economy, it doesn’t… Best I managed is 15L/100km. Your more reasonable right foot might return a 13.5L/100km, at best.

The V8’s difficult to resists and is well matched to the transmission. It’s also one of the many reasons why having and driving a Jeep Grand Cherokee is easy – you never fear the unknown. It’s not without the occasional bug obviously, but it delivers a high level of confidence.

It also delivers refinement. The air suspension blurs the line between a floaty and comfort. When the drive mode is left in “normal”, the truck will lean intently into a corner like a good ol’ SUV once did. I admit to enjoying the sensation. Steering too is old-school in that it works, and not much more. This is an American carmaker’s old approach to comfort. And it would appear that it is still quite valid today.

I’m a big fan of the 2018 Jeep Grand Cherokee. As of yet, I’ve no need for three rows and as such, leaves the Jeep to battle it out with the Ford Edge, Hyundai Santa Fe Sport and my good buddy, the Toyota 4Runner. The Korean is far less expensive but could never keep up with the other two. The Ford is more car than truck…

The SUV version joins the electric pickup in the GMC lineup. The first deliveries are expected to take place before the end of...
Read more
Previous article2019 Rolls-Royce Cullinan: Heavy, powerful and oh-so opulent
Next articleThe Volkswagen Golf GTI TCR: fastest most powerful GTI ever