The new Chevrolet Silverado HD grows in capabilities and technology. Most importantly, it drives better than ever thanks in large part to the Duramax diesel engine.

Bend, OR. – There are few automotive segments currently better served by the quality of its products than full-size pickups. And by better served, I am referring to the fact that the OEM players in these segment deliver 110% every time they launch a new generation. The new 2020 Chevrolet Silverado HD however, got 109.9%.

In North America, full-size pickup trucks are without a doubt the ones that receive the most attention and resources. The lengths to which car companies go to in order to outdo the others leads me to believe that if this energy was put towards space travel, we’d have landed on Mars 5 years ago and began colonizing it.

The latest generation of the Chevrolet Silverado HD is just that, or nearly. This is GM putting in everything it can into one vehicle, surpassing itself and delivering something that is immensely impressive. The principal caveat to this assessment is that they either ran out of time or money when the time came to redesigning the truck’s immensely important face.

I thought it funny that throughout the given presentations, all GM reps repeated countless times how handsome and attractive the truck is, as though they were intently attempting to drill the though into our minds. Truth is, it’s a great-looking truck so long as the front end is not visible. In fact, it makes the 1500 Silverado look smarter – this is apparently what HD customers wanted…

A little of the same can be said for the interior. Exactly like my recently reviewed 2019 Chevy Silverado 1500 High Country, the dashboard is plain and uninspired but ergonomics are good. All this could be considered secondary as HD truck drivers are a demanding bunch and their top priority is towing as many earn a living with their trucks and/or haul their most prized possessions.

The Chevrolet Silverado’s Durabed is one package that can be admired, from the rear. It features an available power tailgate, tie downs, outlet and most importantly, the bed is now much wider for segment-leading cargo volume.

For towing and hauling

On the first point, it’s just about the numbers. With all the new improvements, from a larger prop shaft, stronger u-joints, 12-inch ring gear and loads more cooling, the Silverado 3500 HD with Duramax, dual-rear wheels and 10-speed Allison transmission will tow up to 35,500 lb. Relatedly, and this is very interesting, all Silverado HDs have set tow ratings. In other word, every 2500 petrol will tow so much, every 3500 Duramax single-rear wheel will tow a set amount. The competition, for a given model and powertrain, will display numerous different ratings.

On the second point, it’s a combination of equipment, features, and how it all comes together. There is another slight caveat here.

Part of the experience is the slew of new technologies involved with towing. GM’s most novel one is an 8 camera setup which allows 15 different views. I have limited towing experience and found only three of the views to be useful: up front, immediately behind the trailer (trailer can be wired with cameras that will feed images into the truck) and the “invisible trailer” view, which is like looking in a rear-view from the trailer.

Of the many other features, I like the fact that trailer profiles can be stored, and there’s even a way to have trailer tire pressure and temperatures monitored and displayed in the truck. These are only a few elements that GM has put in place for truck buyers. Towing can be stressful, as shown in a survey GM performed. They discovered that 57% of drivers are stressed when towing. Chevy has worked hard on improving the experience.

Another way to address the challenge that is towing is with more power. GM did that too.

There’s a new 6.6-litre petrol V8 available with the new 2020 Silverado HD. Its power is considerably higher than the outgoing 6.0-litre V8, up to 22% more in fact. Now with 401-horsepower and 464 lt.-ft. of torque, its ratings have increased, up to over 17,000 lbs. Its weakness however is the 6-speed automatic, a carryover. GM has invested heavily in 9- and 10-speed autoboxes but has left this one alone, unfortunately. Its taller gearing wastes engine revs and hurts the overall towing experience. We now know of at least one of the mid-cycle changes…

With a 12,000 lb load, the 6.6-litre petrol did its best to manage. The 6A did as well but the struggle was considerable especially in uphill sections. The V8 was helplessly pinned at 4,500 rpm, working hard to keep speeds up.

With 445-horsepower and 910 lb.-ft. of torque, the turbocharged 6.6-litre Duramax V8 doesn’t really need to put out more power. Contrary to the 6.6-litre petrol, GM grafted a new 10-speed Allison transmission to the mill to make better use of the available grunt. With the sole exception of cost, there is no other reason to overlook the Duramax. The new 10-speed were made for each other, like PB and J.

With over 17,000 lb behind it, the 3500 HD’s, with Duramax, performance was in stark contrast to that of the other – the trailer wasn’t there. So effortless is the power delivery, perfectly geared is the transmission, that the Silverado HD simply goes about its business. Chevy states that unlike the competition, their HD can tap into maximum power from a standstill, enabling the truck to accelerate so effortlessly. I was unable to locate Ford and RAM specs that say otherwise. Thanks to the 10-speed, engines speeds remained close to 2,500 rpm when pulling uphill.

And there’s more. The chassis, from ride quality to steering, and overall refinement were unaffected by the trailer. The suspension is a short/long arm setup for a better ride, whether loaded or not and it proved to be superior. I’ve driven a number of Heavy Duty and Super Duty (and XD…) trucks on launch events such as this but never has a loaded truck felt so civil, quiet and unphased.

If anything, GM has achieved building an excellent truck to drive. Without a doubt, and even if it continues to be a $10,000 option, the Duramax V8 diesel engine and its new 10-speed automatic transmission are worth every penny. Now, about the front fascia, I’m convinced that a number of after-market truck tuners will jump at the opportunity to design something attractive for a reasonable price. 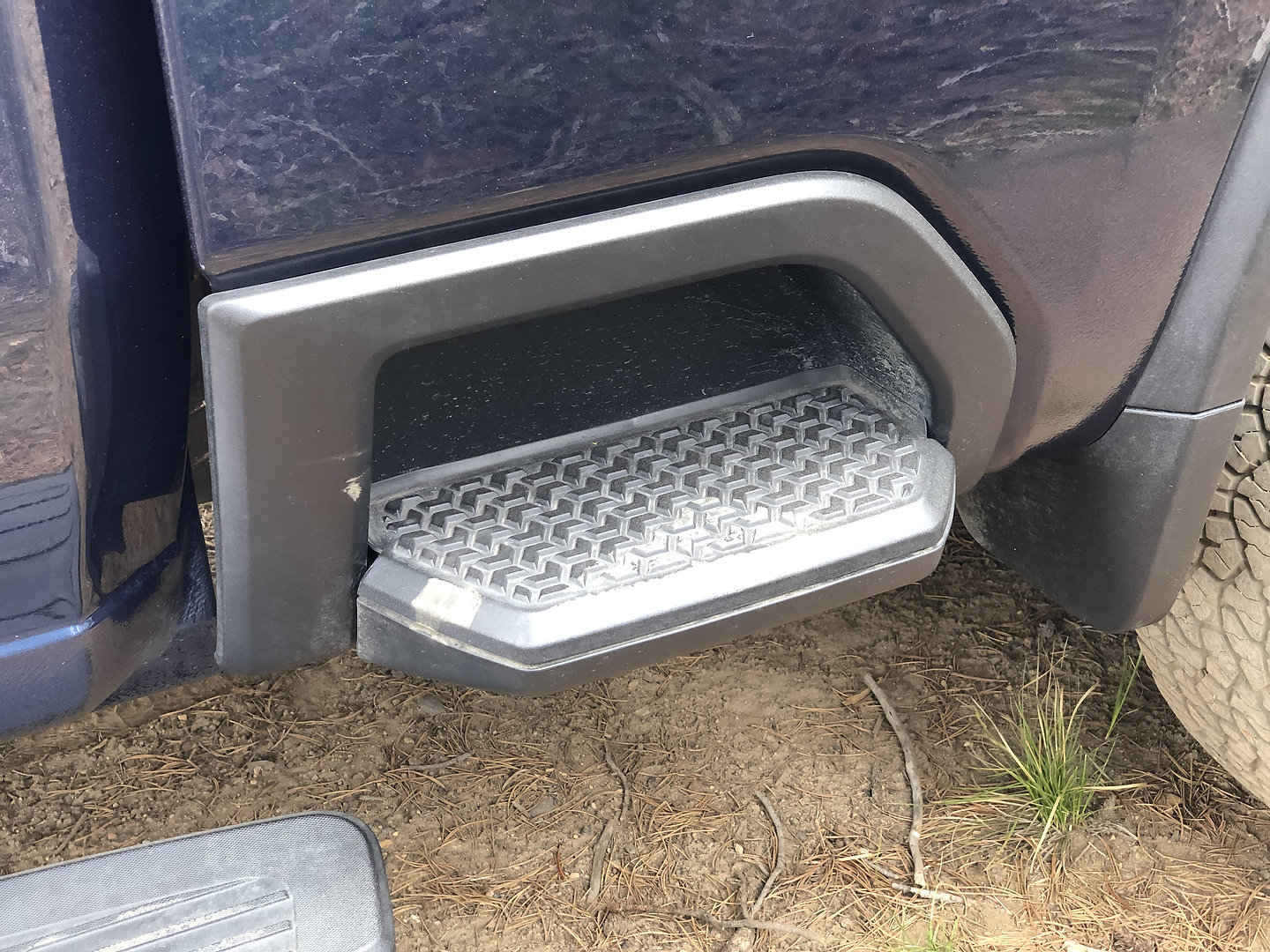