2022 Nissan Frontier Gets A Major Overhaul 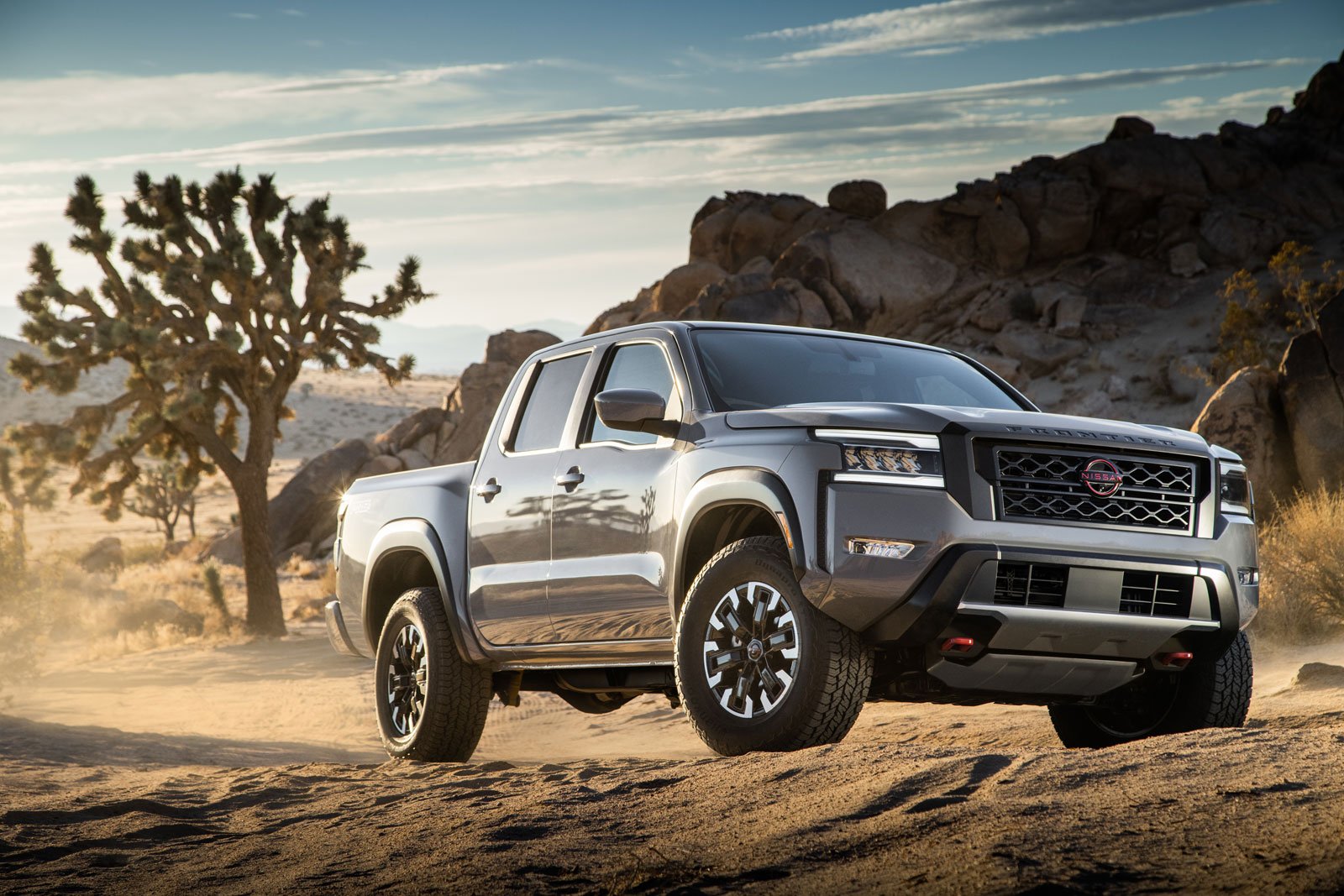 A much-needed redesign for the U.S. and Canada markets.

The Japanese brand’s midsize pickup in the United States and Canada was long overdue for a redesign, and it finally got one. The 2022 Nissan Frontier has just been unveiled with all-new styling, a more modern cabin and the same robust mechanicals as before.

To be precise, the new Frontier’s powertrain debuted in the outgoing generation’s 2020 and 2021 model years, offered in the United States, but never ended up being sold in Canada. The archaic 261-horsepower, 4.0L V6 and five-speed automatic combo was replaced by a new 3.8L V6 and a nine-speed automatic transmission, good for 310 horsepower and 281 pound-feet of torque. 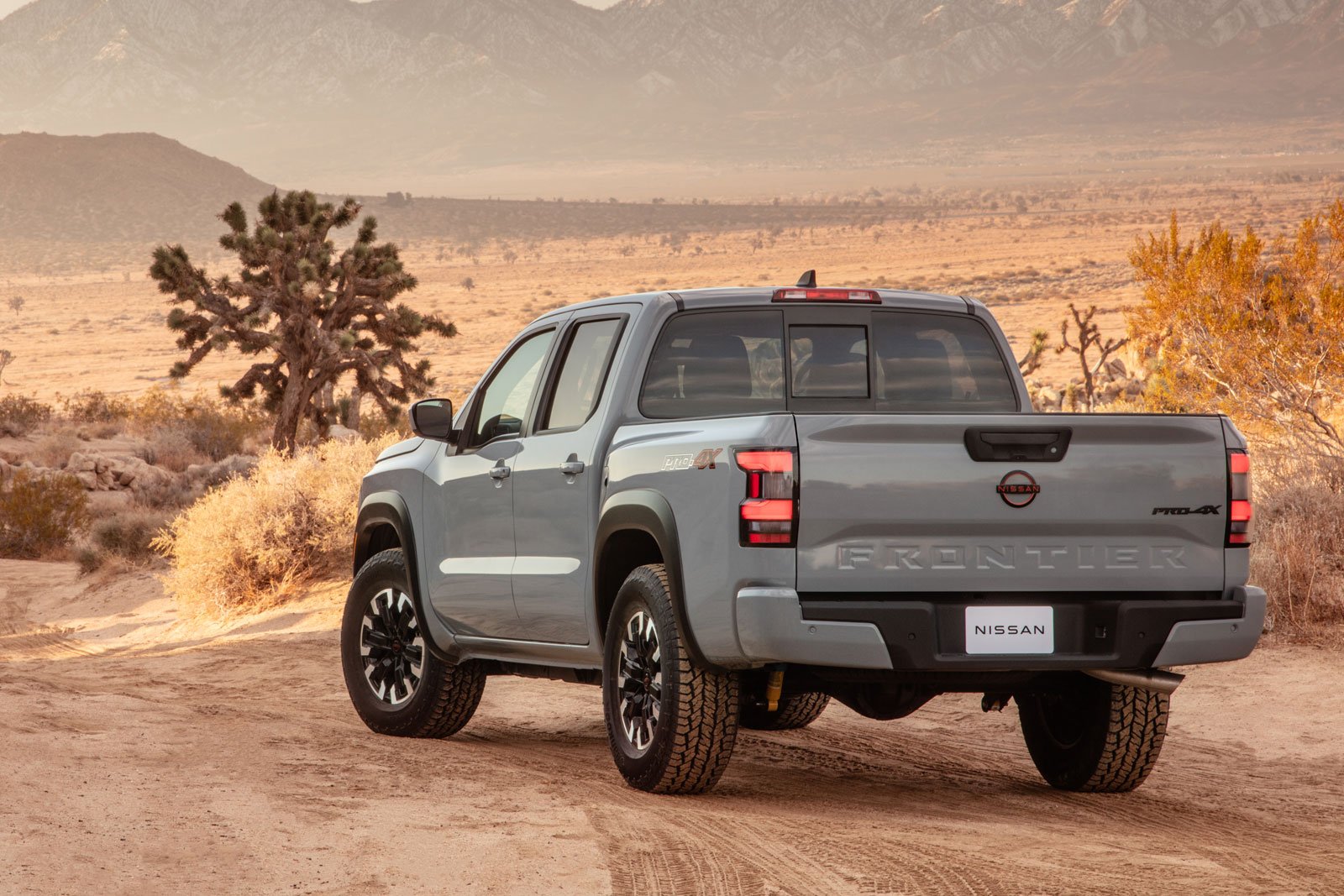 That’s class-leading output, right up there with the Ford Ranger, and a couple of horses above the V6 engine found in the Chevrolet Colorado and GMC Canyon. The new Frontier is also more powerful than the Toyota Tacoma, the Honda Ridgeline and the Jeep Gladiator. Equipped with 4WD, the 2020 Frontier posted city/highway/combined fuel economy ratings of 17/23/19 mpg, and the new generation is expected to present similar numbers.

By the way, there won’t be a base four-cylinder engine anymore, and the manual transmission has also been canned moving forward. 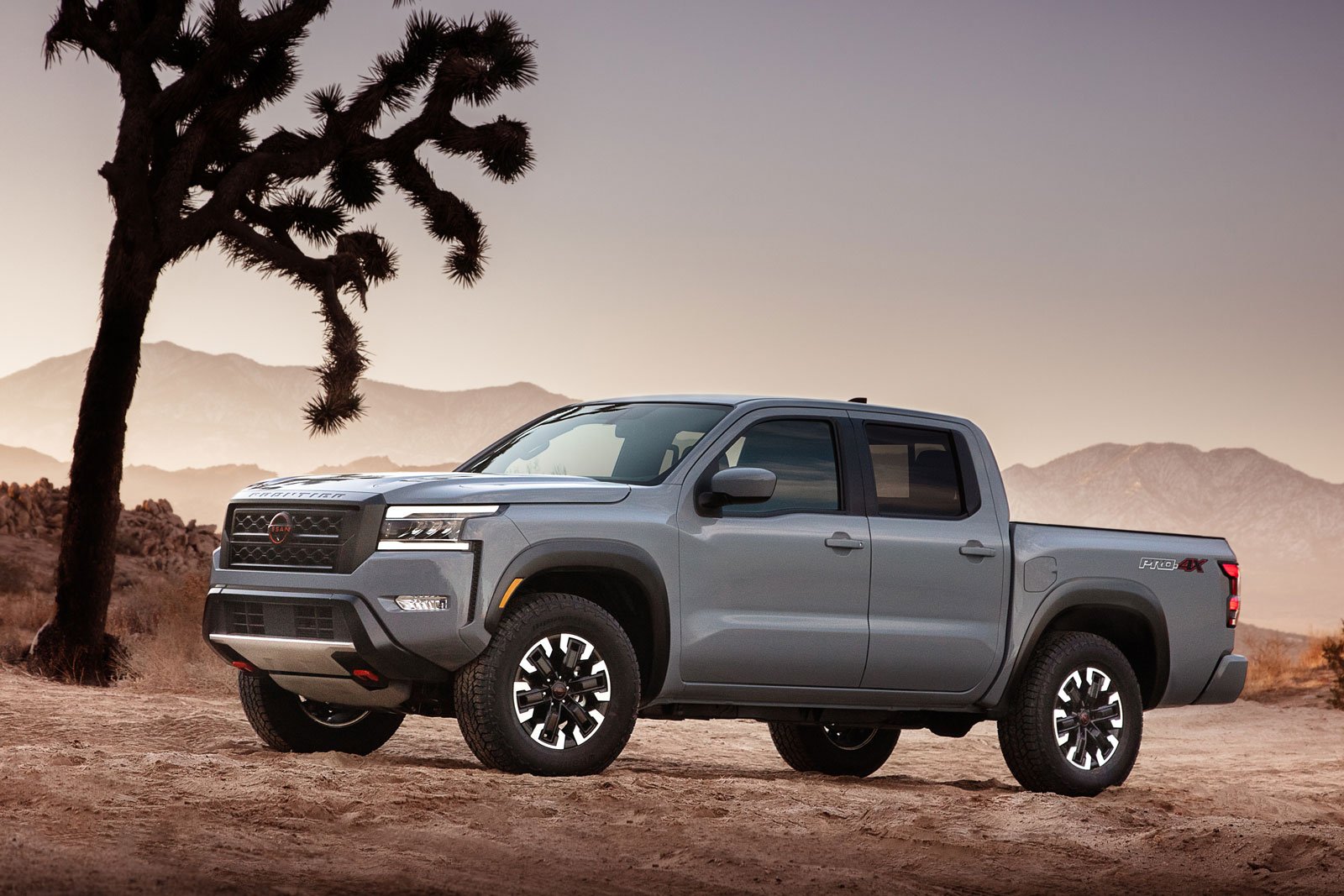 Towing capacity in the 2022 Nissan Frontier is rated at 6,720 pounds or 3,048 kilograms, surpassed by every rival expect the Ridgeline, but slightly better than in the outgoing generation. That’s with a two-wheel drivetrain, while the 4×4 Frontier gets a max capacity of 6,490 pounds or 2,944 kilograms.

Once again, King Cab and Crew Cab configurations will be available, matched with six- and five-foot beds respectively. An important distinction between the two North American markets is that the 2022 Nissan Frontier will include 4WD as standard in Canada, although there will be a base S 4×2 trim for fleet customers only. 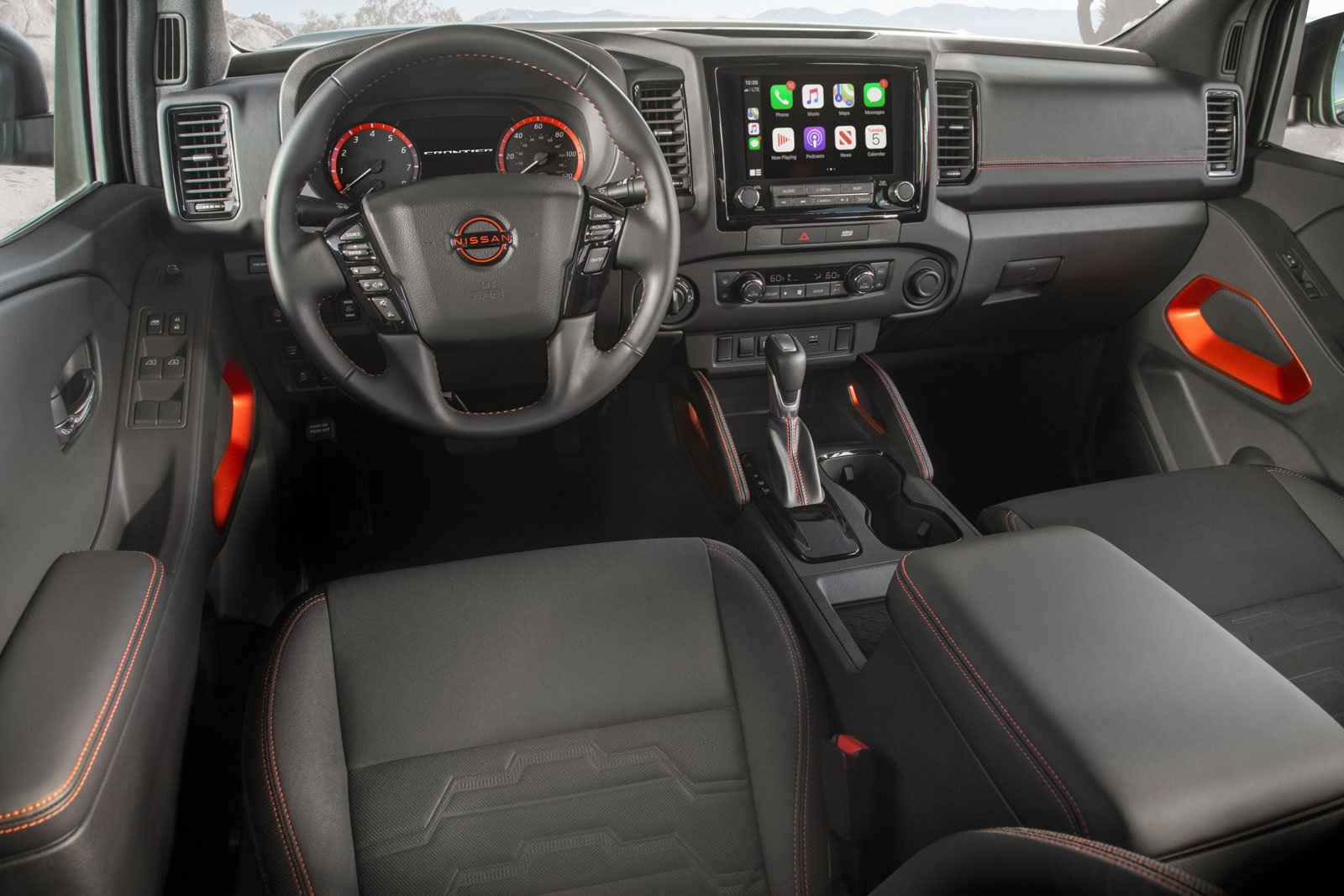 As such, the Frontier in the U.S. will be offered in S and SV trims, with both cab styles and drivetrains, while the PRO-4X Crew Cab will once again cater to off-road enthusiasts, and a new PRO-X Crew Cab variant is added that serves up the rugged appearance atop a 4×2 drivetrain. Canada will get S, SV and PRO-4X trims in both King Cab and Crew Cab configurations, but not PRO-X. The reason why a PRO-4X King Cab is available north of the border, and not in the U.S., is because 60% of buyers choose the off-road-ready trim level.

The 2022 Nissan Frontier is built on the same platform as the outgoing generation, but company officials pointed out that the truck’s structure was improved upon over the past few years, so although it’s not new, it isn’t exactly old, either. As a result, wheelbase is unchanged, but overall length has grown by a few inches. However, nothing has been retained regarding the vehicle’s bodywork, with an all-new, brawny look that gets an “interlock” styling theme, which can be observed in the way the headlight clusters and taillights blend into the fenders, for example. The beds are about the same size as before, but their walls are taller, with new LED lighting as an option, and we can definitely see more tire sticking out underneath, as if the truck was lifted. 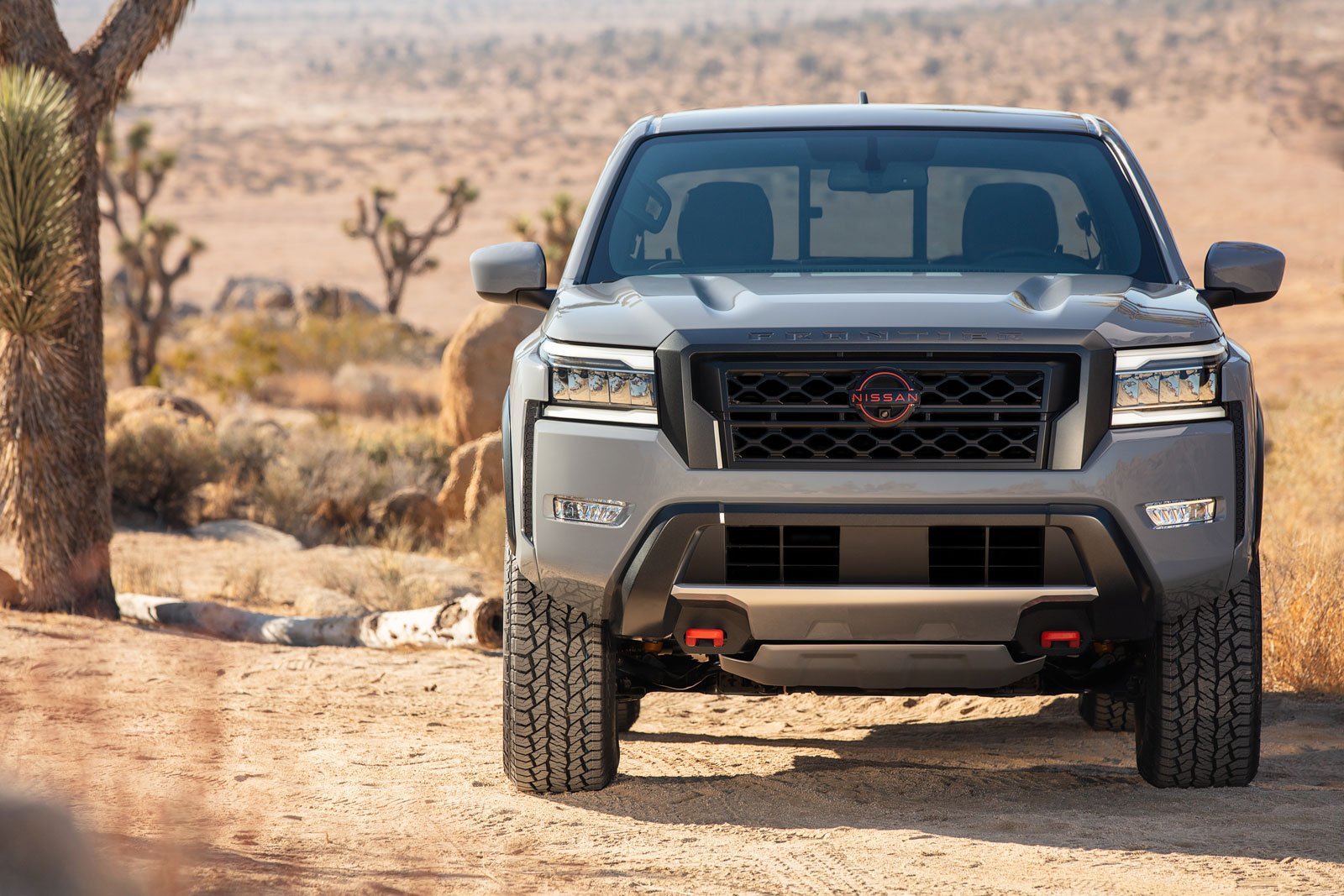 The company claims the new Frontier delivers “best-level ride and handling,” which sounds like a safe way of saying it’s improved, but not better than its rivals’. Nevertheless, engineers have reduced road vibration by 80%, and the truck should drive less like a truck with a 16% quicker steering ratio. Models equipped with the 4×4 setup also include hill descent control and hill start assist.

The 2022 Nissan Frontier gets a comprehensive safety feature upgrade, now including the Nissan Safety Shield 360 suite as standard in Canada, and optional in the U.S. Automatic emergency braking with pedestrian detection, blind spot monitoring, rear cross traffic alert, lane departure warning and high beam assist are all part of this package, while intelligent cruise control and a rear-seat occupant reminder alert are included in every trim level up in Canada, available in the United States. 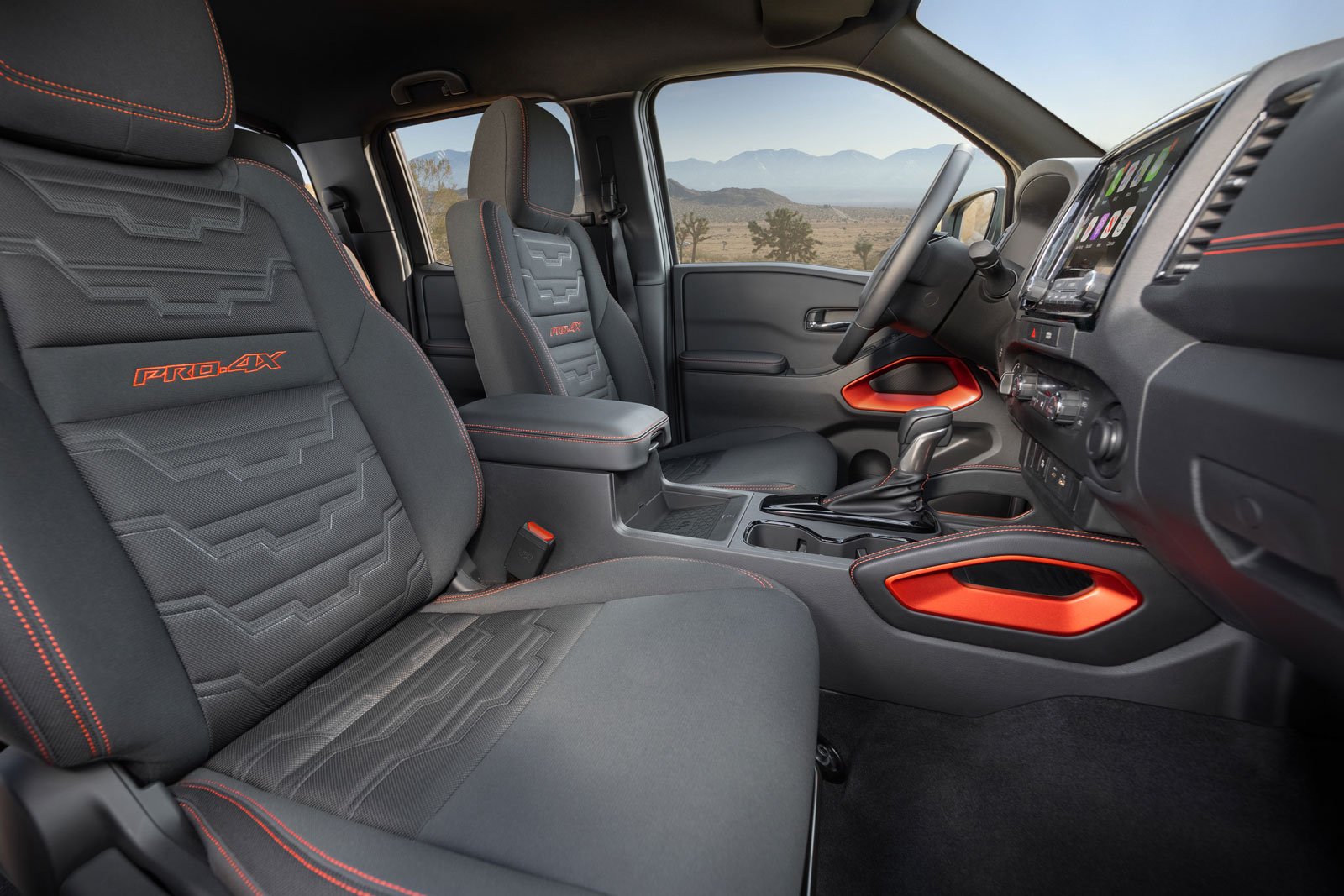 The midsize pickup’s cabin is obviously all-new, which also features the interlock theme in its design that’s apparent in the way the center stack connects to the rest of the dashboard. The PRO-X and PRO-4X stand out with their orange contrast accenting and seat stitching, along with their embossed seat fabric.

No word on pricing yet, but the 2022 Nissan Frontier is scheduled to go on sale in this summer, alongside the 2022 Nissan Pathfinder which has just been revealed as well.

It features two new hybrid powertrains. The CX-90 is not only the most powerful Mazda ever but the most luxurious. Mazda Canada has just...
Read more
Previous articleRedesigned 2022 Nissan Pathfinder Debuts
Next articleModern BMW Design Was Never Intended To Please Everyone